(Harrisburg) — Closed-door talks on legislation seen as crucial to producing a prompt election result in the presidential battleground state of Pennsylvania appeared stuck Thursday between the Democratic governor and the Legislature’s House Republican majority.

In a statement to The Associated Press, Gov. Tom Wolf’s office said an offer extended in recent days to House Republican leaders has been effectively rejected, now less than three weeks before Election Day.

“At the time, that deal was not sufficient for House Republicans, and since then, the administration has not heard back,” spokesperson Lyndsay Kensinger said in a statement.

House Republicans did not dispute that.

A spokesperson for House Majority Leader Kerry Benninghoff, R-Centre, said Thursday that the caucus continues to seek separate provisions in any election-related legislation, provisions that Wolf has threatened to veto.

Those provisions line up with fights that President Donald Trump’s campaign and the Republican Party are waging in the courts.

They include banning drop boxes that some counties are using to collect mail-in ballots and trying to lift a county residency requirement on certified poll watchers amid Trump’s calls for his supporters to “go into the polls and watch very carefully.”

Trump campaign officials say they don’t have enough poll watchers in some counties, including Philadelphia, a Democratic bastion that Trump has repeatedly suggested needs to be watched for election fraud.

The 11th-hour fight is happening in the shadow of Trump’s claims at a recent rally near Harrisburg that the only way he can lose Pennsylvania to Democratic presidential nominee Joe Biden is if Democrats cheat, a claim he also made in 2016′s election. 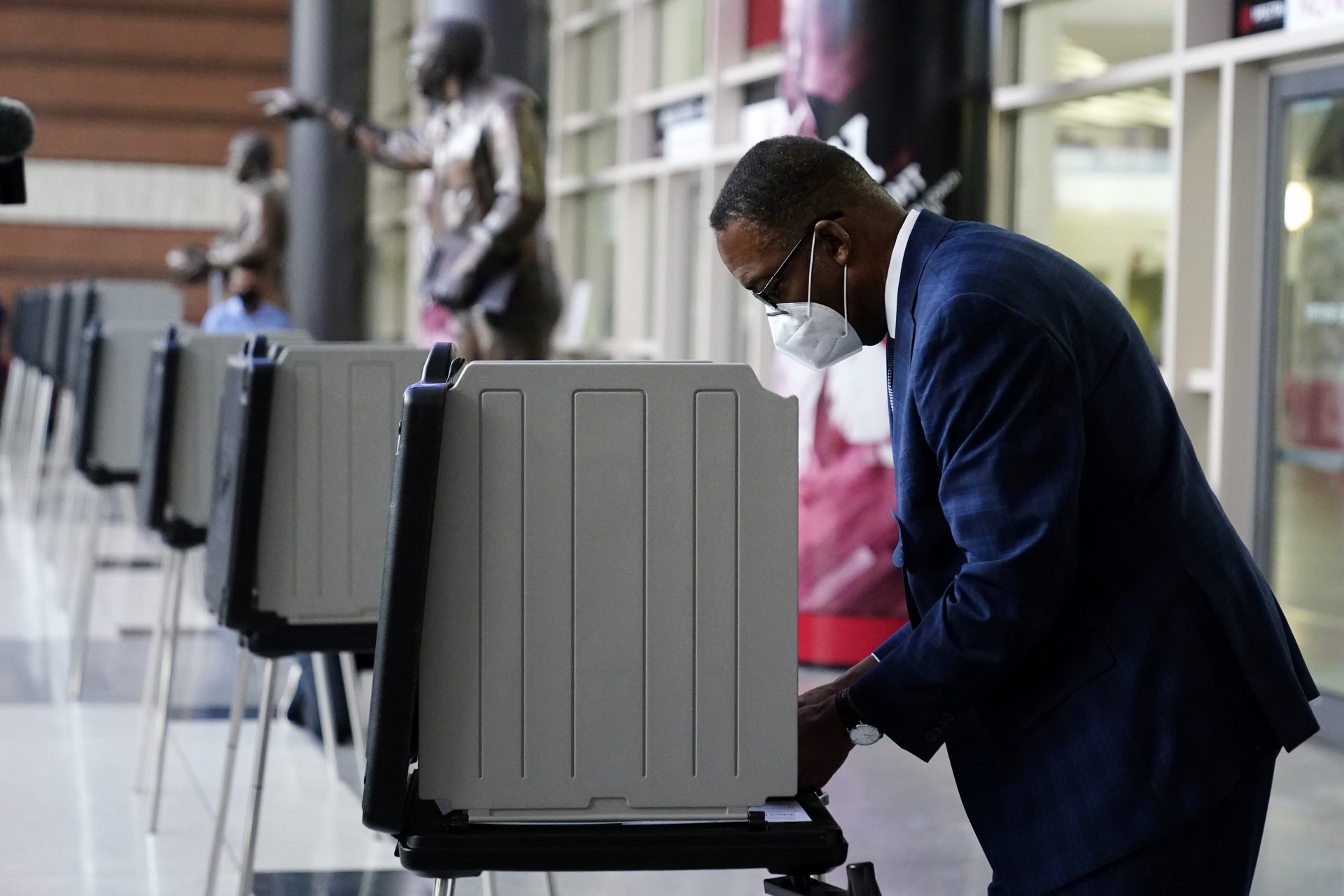 Meanwhile, the partisan battle spawned another lawsuit Thursday, as Republicans in the Philadelphia suburb of Delaware County sued to block the county from operating a three-day pop-up voting center in the predominantly Black city of Chester.

Wolf’s offer involved a matter of prime importance to county election officials: giving them at least a few days before Election Day to process what could be 3 million or more mail-in ballots to get them ready to tabulate as soon as polls close.

Such a provision would speed up the vote count, ensuring that the vast majority of ballots are tabulated within hours after polls close, and give it more public credibility, county officials say.

Doing nothing risks a dragged-out vote count, possibly leaving the election result in doubt for days after polls close, drawing lawsuits and claims of election fraud in the high-stakes presidential election, they say.

The governor’s offer also added security requirements for the drop boxes that many counties — particularly heavily populated and Democratic-leaning counties — are using to help collect mail-in ballots from voters.

House Republican legislation passed last month included a three-day head start for counties on processing ballots. But it also carried measures that Wolf opposes and that align with litigation pressed by Trump’s campaign in state and federal courts.

In this Sept. 29, 2020, file photo Philadelphia City Council President Darrell L. Clarke fills out an application for a mail-in ballot before voting at the opening of a satellite election office at Temple University’s Liacouras Center in Philadelphia. Pennsylvania has seen a frenzy of election-related lawsuits as state officials prepare for some 3 million people, about half the expected turnout, to cast mail-in ballots.

Those include lifting the county residency restriction on party or campaign representatives who observe inside polling places and effectively banning drop boxes. Trump’s campaign has said that processing ballots before Election Day “must, at the very least, be a transparent process with a poll watcher in the room to ensure all rules are followed.”

House Republicans also oppose a court-ordered three-day post-election window for counties to accept and count mailed-in ballots, a decision that Republicans are contesting in the U.S. Supreme Court.

In Delaware County, a judge denied a claim by Republican voters that the three-day pop-up voting center in Chester was approved by the Democratic-controlled county election board without putting it on the agenda or allowing for public comment, in violation of state public meetings law.

The judge ruled that they didn’t prove a violation of the law. A lawyer representing the Republican voters, Joel Frank, said Thursday night that he will appeal immediately.

The county’s Republican Party chair, Tom McGarrigle, said the pop-up voting center, to run Friday through Sunday, is not centrally located in the county, and is to operate in an area with a high concentration of registered Democratic voters.

“Democrats are clearly trying to run up numbers in Delaware County,” McGarrigle said.

In a statement, the county’s solicitor, William Martin, called the plaintiffs “undemocratic players, who continue to file baseless litigation, as part of their ongoing voter suppression efforts.”