Poll watchers outside Temple Brith Achim Synagogue, the polling place for Upper Merion Gulph 2 and King 1-2, on Election Day, May 21, 2019.

Everything Pa. poll watchers can — and can’t — do on Election Day, explained

President Donald Trump called on his supporters to “go into the polls and watch very carefully.” But there are actually strict rules about poll watchers and what they can do. 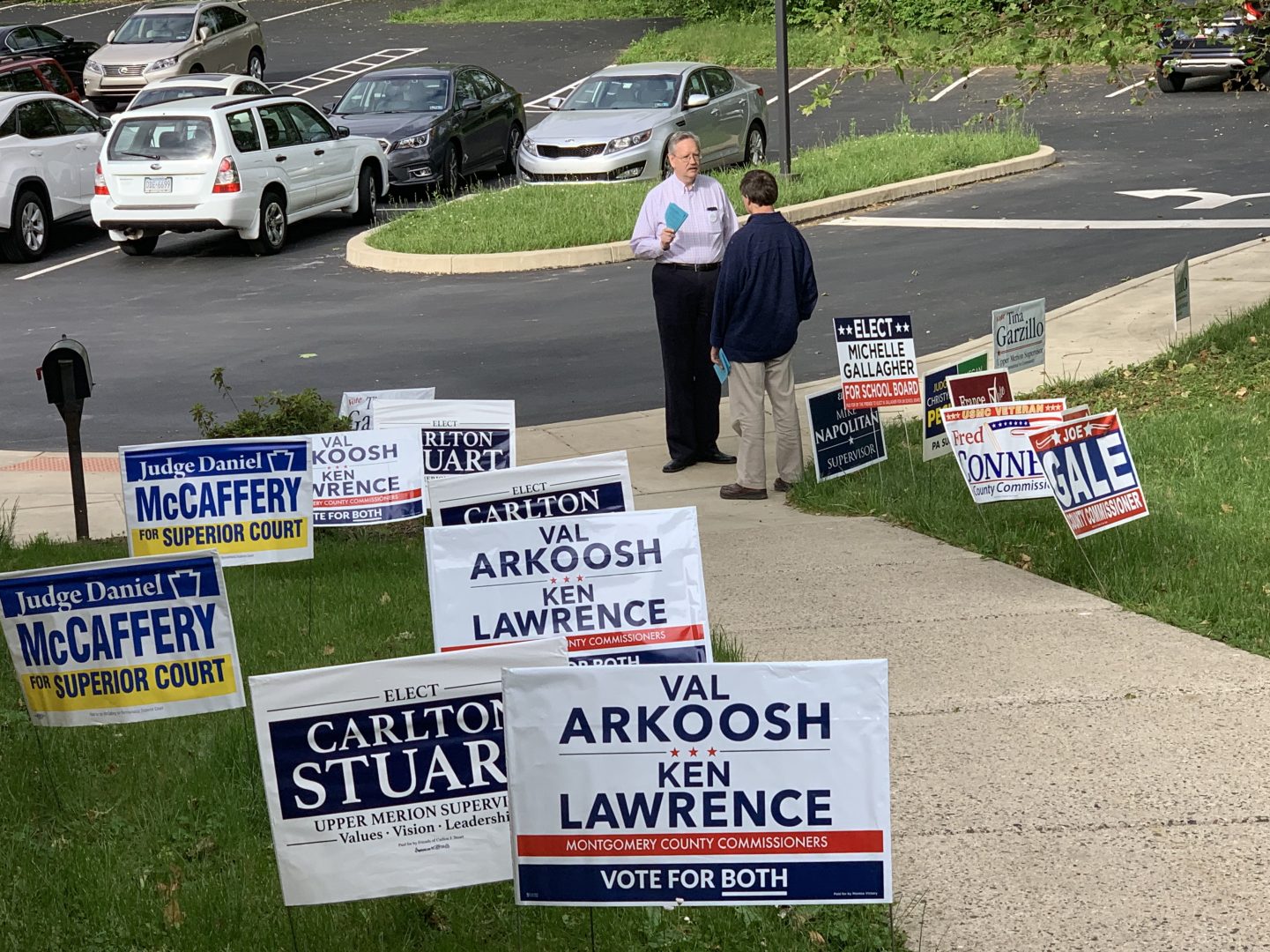 Poll watchers outside Temple Brith Achim Synagogue, the polling place for Upper Merion Gulph 2 and King 1-2, on Election Day, May 21, 2019.

(Harrisburg) — State Democrats and Republicans are training a small army of partisan poll watchers to be their eyes and ears at voting sites across the state, a typical and legal process that allows both parties to monitor activities on Election Day and flag potential problems.

But President Donald Trump is calling for another army, of sorts.

During the first presidential debate, he urged his supporters “to go into the polls and watch very carefully.” But not just anyone can enter a polling place to keep watch over the proceedings, and the call to action has raised concerns over potential clashes and intimidation.

Polling places are generally intended to be safe spaces devoid of political influence, allowing people to cast their ballot freely and without fear. So what exactly is a poll watcher? What are they allowed to do? And what actions could get someone in trouble?

Here’s everything you need to know about poll watchers before you vote:

What is a poll watcher?

Odds are, if you’ve ever voted in person, you’ve come across a poll watcher. Dating back to the 18th century, campaigns and political organizations appoint poll watchers to observe in-person voting and potentially challenge voter qualifications.

But poll watchers are different from poll workers who run in-person voting.

Generally, there are at least six workers inside each voting location manning sign-in tables, directing voters, and responding to voter questions or concerns. In Pennsylvania, they work only within the precinct where they are registered to vote. Election judges open polling locations, verify voting lists, and process the votes at closing.

Poll watchers have a different role. They observe and look for indicators of bias or interference: a poll worker providing too much guidance on a candidate; a machine acting erratically; any campaign materials within voting locations.

Campaigns and political parties can appoint two or three watchers, respectively, per precinct. Only one poll watcher from each candidate and party is allowed inside the polling place at any given time, according to state law.

Poll watchers cannot go into the area where voters are actually casting their ballots, and should rarely come into contact with voters. According to Department of State guidance, poll watchers must report any potential problems to the election judge on-site at polling locations, who will then determine if the poll watcher’s claims are reasonable and merit follow through.

And while the president called for his supporters to go into locations and “watch” the polls, that’s not something you’d want to do, unless you’re aiming for an arrest and $15,000 fine.

In Pennsylvania, watchers can work only in counties where they’re registered to vote and must have a certificate from that county’s election office to show they are cleared to work.

A federal judge recently dismissed a lawsuit from Trump’s campaign seeking to change state rules for watchers so they can work anywhere in the state, though an appeal is expected. State Republican lawmakers also have pushed for relaxed residency requirements during discussions over election reforms expected to resume publicly when the legislature returns to Harrisburg on Oct. 19.

What can’t poll watchers do?

In 2016, the Department of State’s guidance to counties on poll watchers was limited, essentially offering basic rules for what poll watchers were and who could act in that capacity.

This year, the department delved more into what watchers can’t do, specifically around voter intimidation, fearing aggressive poll watchers or Trump voters coming out en masse and disrupting locations.

“What we’re really trying to prevent is people being disruptive and making it so that people are having a bad experience when trying to cast their ballots,” said Marc Meredith, an elections researcher and assistant professor of political science at the University of Pennsylvania.

Some of the things poll watchers can’t do that voters should be aware of:

They also can’t monitor activity at satellite county election offices or drop boxes. Recently, the Trump campaign lost a legal challenge to those rules in Philadelphia.

What can poll watchers do outside polling locations?

And although “hovering” is on the Department of State’s list of voter intimidation examples, state law isn’t terribly specific for how poll watchers should distance themselves from voters to avoid allegations of intimidation.

For example, state guidance prohibits watchers from electioneering — campaigning in favor of a particular campaign or party — if they’re within 10 feet of the polling place or inside it.

It also says watchers have to keep “a safe and respectful” distance from the area where voters are casting their ballots.

Some counties have clearer rules about this particular point. In Lehigh and Chester counties, for example, watchers must stay at least 6 feet back from voting activity. Monroe and Bradford designate a table where poll workers must stay.

Jon Greenbaum, chief counsel for the Lawyers’ Committee for Civil Rights Under Law, says Pennsylvania doesn’t stick out for having either inadequate or ideal rules for poll watching compared to other states.

“One of the key distinctions is that poll watchers shouldn’t be interfacing with voters,” Greenbaum said. “They should be observing what is happening, but not directly interacting with voters at all. Because then you do get one of the circumstances where behavior of poll watchers could intimidate voters. Observe, not interfere.”

Most of the officials from the dozen counties who responded to WITF’s inquiry seeking specifics said they’ve stressed during poll worker training the potential for intimidation by poll watchers as well as possible unauthorized observers, telling workers to order violators to leave and to call 911 if scenarios appear to be escalating.

But behavior that could possibly qualify as voter intimidation outside polling locations is also a legal gray area, said Michael Sances, an assistant professor of political science at Temple University. He said because there have been so few cases on voter intimidation since the 1980s, there isn’t a lot for counties or states to go off of.

“If someone walks up to you who is not a poll worker and asks for identification or challenges you, that is a pretty clear case of voter intimidation,” Sances said. But, Sances continued, what if someone stands outside of the polling location’s buffer zone brandishing a firearm, which is legally permissible in Pennsylvania?

What should you do if you feel intimidated?

Remember: If someone approaches you while you’re voting and challenges your right to vote, odds are these are not official poll watchers and you should report them immediately to any poll worker in the area. Call 911 if you are threatened or physically assaulted.

County representatives say voters who feel uncomfortable while at their polling location should tell a poll worker about the situation. The worker will relay that information to an election judge on scene. Or you can dial 1-877-VOTESPA, and file a complaint through the state’s hotline.

Wanda Murren, spokesperson for the Department of State, didn’t want to comment on hypothetical scenarios, but did say, “the judge of elections is the first person to whom a voter should address questions or concerns about things occurring at the polling place.”

Voter advocacy groups and partner organizations also are running their own campaigns to educate and support voters. The nonpartisan Election Protection coalition has its own hotline: 866-OUR-VOTE.

Tips received through that hotline are handled as warranted depending on the situation, but responses could include attorneys seeking court intervention or dispatching field volunteers to a particular site, according to Suzanne Almeida, interim executive director and an attorney for Common Cause Pennsylvania, a voting rights organization.

Almeida said Common Cause alone plans to deploy 1,000 volunteers — double the number on the ground during the 2018 general election — to polling places where voter intimidation is most likely to occur.

Will my ballot get counted? How the pending Supreme Court decision could impact voting in Pa.