Hundreds of Pa. child-care centers have closed, and some fear it will get worse

Federal coronavirus relief money made a big difference in Pennsylvania, but as it dries up, a second wave of closures could be coming.

(Boyertown) — Some things have returned to normal at Dorothy Creevey’s child-care center outside Boyertown: little kids searching for pumpkins in a garden, building towers, and painting with marbles.

But there are also many signs of the coronavirus’ lasting impact. Red, blue, and other colored blocks lay on a table, left out to dry after being disinfected. Puppets and other plush toys that are harder to clean day after day sit on a high shelf, out of reach.

On a recent evening, the center’s director, Nancy Miller, packed away paper records of children’s temperatures, taken when they arrive and leave. Before the pandemic, Boyertown Children’s Center served a little over 60 children. It reopened in June with 11, but received a boost because another center located less than two miles away closed.

Between March and the beginning of September, more than 260 licensed child-care programs across Pennsylvania permanently closed, according to Department of Human Services records. More than 400 other licensed programs remain temporarily closed.

Those closures represent just a fraction of the roughly 6,500 licensed child-care programs that remain open — a success credited to the roughly $220 million in federal dollars allocated to providers to help them stay afloat, as well as a policy that Gov. Tom Wolf’s administration says sent $370 million to providers that serve low-income families.

But as CARES Act funding dries up and the state switches back to its pre-coronavirus funding approach, advocates warn that many more child-care providers will be pushed to the breaking point this fall and winter.

Dan Wuori, director of early learning at The Hunt Institute in North Carolina, has tracked how states spent CARES Act money on child care. He said Pennsylvania’s approach appears to have been mostly successful, with fewer than 4% of licensed programs permanently closing.

“The real question now is … ‘What comes next?’’ Wuori said.

In Northampton County, Ashley Patete found out in mid-August that her 4-year-old daughter’s child-care center would close indefinitely by the end of the month.

“I’m just hoping that they can open back up and have the same staff, because without them, it just wouldn’t be the same,” Patete said.

The replacement program Patete found offers fewer hours. And that’s made it harder for Patete to do her job as an early intervention therapist.

She travels to homes and child-care centers to help children who have behavioral and social challenges. Now, her biggest struggle is figuring out how to drive to those visits while still making it back in time to pick up her own daughter.

When the federal government sent billions of dollars in CARES Act money to the state, leaders here took a broad approach to rescuing the child-care industry, offering up about $220 million to providers in good standing with the state — no application required.

But from the beginning, state officials and child-care advocates clashed about which providers needed a lifeline most.

Members of the Start Strong PA campaign, a collaboration that advocates for high-quality early learning, pushed for an approach that put more emphasis on helping providers that served low-income families and had achieved a STAR 2, 3, or 4 (the highest) quality rating from the state.

Of the more than 260 licensed programs that permanently closed during the pandemic, 13% had no rating and the majority — 63% — had a STAR 1 rating. That’s the standard rating for all certified and compliant programs that have been operating for more than six months.

Because advancing in the program is voluntary, it’s hard to know how high quality those STAR 1 programs were, said Donna Cooper, executive director of Public Citizens for Children and Youth. Some high-quality programs opt out of the STAR system because none of their students rely on state subsidies, so they don’t have the same financial incentive to boost their ratings, she said.

But Cooper said seeing more than 100 STAR 3 and 4 providers permanently or temporarily closed as of last month made her “head explode.”

To reach those levels, programs had to attract staff members with higher education levels, pay for curriculum recommended by the state, and meet other benchmarks.

“It’s just heartbreaking, heartbreaking that we’ve lost those,” Cooper said, “because it is so hard to get providers who serve the kids of working-class families in this state to have the liquidity and internal capacity to become STAR 3 or 4.”

Tracey Campanini, deputy secretary of the state’s Office of Child Development and Early Learning, defended the decision to not prioritize funding for programs with higher quality ratings, saying that relatively few providers statewide — less than 30% — have reached the Star 3 or 4 level. She said state officials needed to guarantee resources at all levels, and to consider what’s best for both providers and working families.

The state did provide additional funding to providers in 27 counties considered a moderate or acute child care “desert.” The list includes mostly rural parts of the state, such as Greene County in the southwest, Elk County in North Central Pennsylvania, and Wyoming County in the northeast.

Barber, with the Pennsylvania Child Care Association, said she didn’t understand why the Wolf administration prioritized providers in those counties when so many providers across the state saw enrollment drop or had to temporarily shut their doors.

State officials did change the formula for the second and third rounds of funding, as the Wolf administration grew concerned about providers across the state shutting down permanently, leaving working families stranded.

“What we started to understand, as we were preparing for round two funding, is this impact that the slow reopening and the continued closures is having on all child care,” Campanini said.

But advocates for providers have been most vocal about a change to the state’s Child Care Works program for low-income families.

For months, the state continued making payments to providers based on how many children they had enrolled before the pandemic, even at centers that saw enrollment plunge or that were temporarily closed. Those payments equaled about $370 million, Campanini said.

The state switched back to its old formula at the beginning of September, over the objections of the Pennsylvania Child Care Association and other advocates. Now, going forward, providers will receive payments only for the number of students they are actually, currently serving.

Barber, the executive director of the Pennsylvania Child Care Association, said some programs expect to lose more than 30% of their revenue under the reinstated policy.

For some, Barber said, “it could be disastrous.”

Despite these concerns, the Wolf administration currently doesn’t plan to reinstate the policy, Campanini said, as the program is meant to support families that need help paying for child care — not providers.

Campanini said paying providers based on pre-coronavirus enrollment made sense in the early months of the pandemic because of the shutdown orders and the gradual reopening of providers.

“But that couldn’t be a long-term solution,” she said. 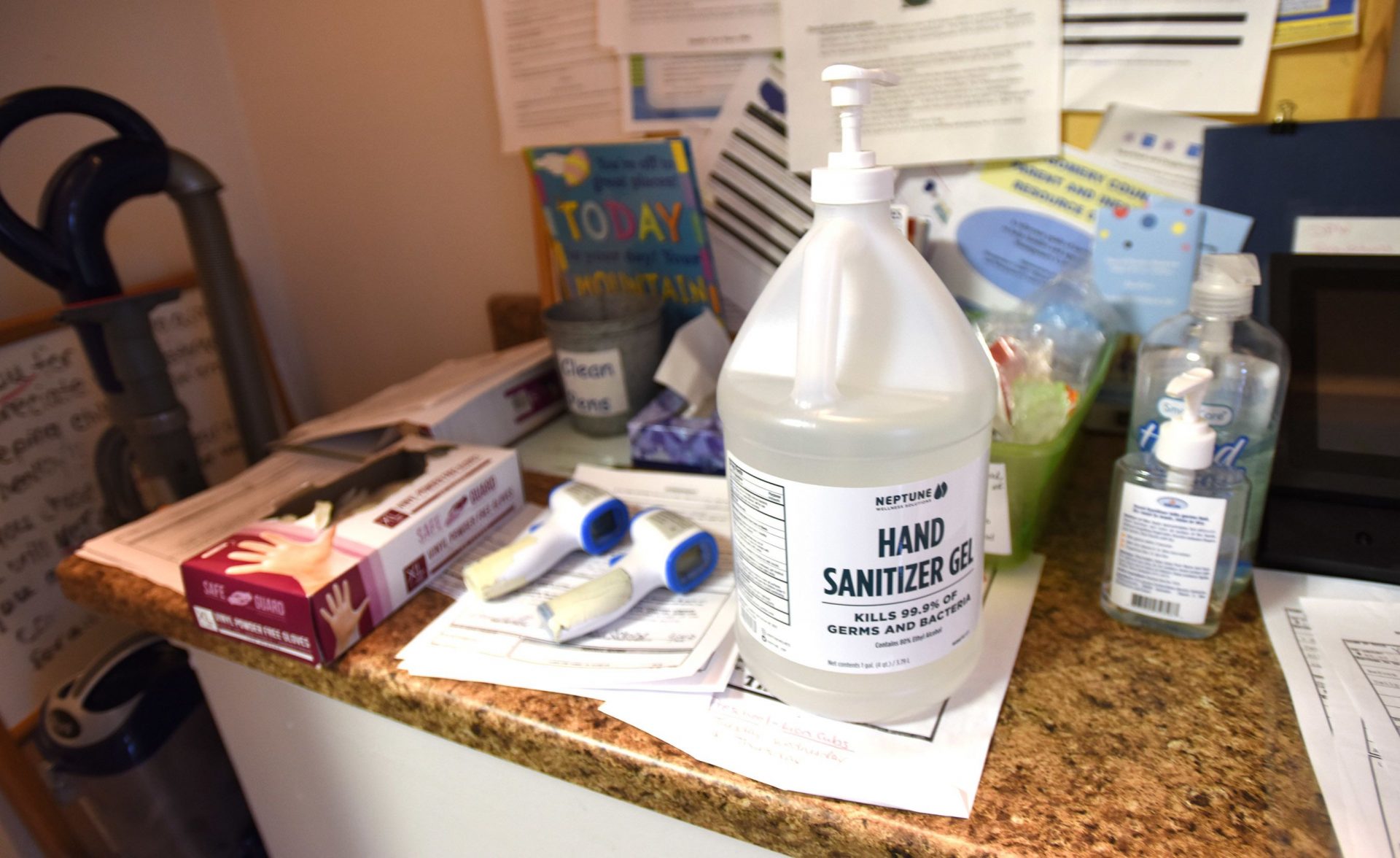 A debate on more aid

In most cases, the state doesn’t track why a program closed.

But interviews with eight providers, as well as with advocates and outside experts, show a variety of reasons why providers shut their doors and why they continue to feel pressure.

Providers said they have had difficulty recruiting workers, finding and paying for cleaning supplies, making up for revenue they lost during shutdowns earlier this year, and bringing enrollment back to where it was before the pandemic.

While Creevey was able to reopen her Boyertown center, she permanently closed a second center about 10 miles away in the Douglassville area of Berks County — the result of failed negotiations with her landlord over the price and length of the lease.

Even though she’s confident in the approach and precautions she and her staff are taking at Boyertown, she worries about the unknowns: whether another surge in cases will lead to statewide shutdowns, or if a case in her building will force her to temporarily close.

Enrollment is close to where it was before the pandemic, but increased social distancing precautions limit how many more children the center can enroll. Those precautions also mean teachers work more hours.

Creevey said the money she received from the state helped her reopen the Boyertown center in June. But she said the money will only sustain her center through November — maybe into December.

“Or I think we’re going to lose more centers,” Creevey said. “Everyone was hoping and thinking that the additional costs and additional expenses and difficulties presented by COVID-19 would disappear in the fall, and that’s not happening.”

Federal lawmakers are at odds over providing more aid, along with other coronavirus relief measures. A proposal, which passed out of the U.S. House in July, to provide $50 billion to stabilize the child-care industry has stalled in the Republican-controlled Senate.

In Pennsylvania, as the governor announced his fall legislative priorities, Wolf said he wanted lawmakers to approve $250 million to help families who need child care for school-aged children because their schools have switched to blended or remote learning.

Wolf also called for $27 million to expand child-care options in deserts. Of the more than 260 permanently closed programs, more than two dozen were in one of those child care deserts.

The list includes Nanny’s Creative Learning Center in Greene County. After Nancy Moore graduated from college with an elementary education degree, she couldn’t find a job in the area. So her parents helped her launch the child-care center in the late 1990s.

The program grew, and she could serve up to 30 children. Then her mother, who helped run the child-care center, died in March of 2019.

Moore finished out the school year so preschoolers could graduate, but then she closed the center to regroup and make some improvements. She thought it would be temporary — until COVID-19 arrived.

Moore considered reopening in August, but she wondered if enough families would enroll to make it affordable. And she worried about exposing her other family members, including another set of grandparents in their late 70s, to the coronavirus.

“We lost my mom,” Moore said, “And I don’t want to be the reason I lose my other family members.”

She decided to not renew her license. Now her four children, including the youngest in third-grade, are enrolled in cyber schools. Some days, she wishes she could reopen the center. But she doesn’t know how she would make it work.