Medical workers wait for cars to pull up to the swabbing tent at the city's coronavirus testing site next to Citizens Bank Park in South Philadelphia on Friday, March 20, 2020. The site, which opened Friday afternoon, is the first city-run drive-through location where people can be swabbed to determine if they have the coronavirus. At the time of opening, it was only for people with symptoms who are over 50 and healthcare workers with symptoms.

Penn State saw another jump in cases among University Park students on Friday. 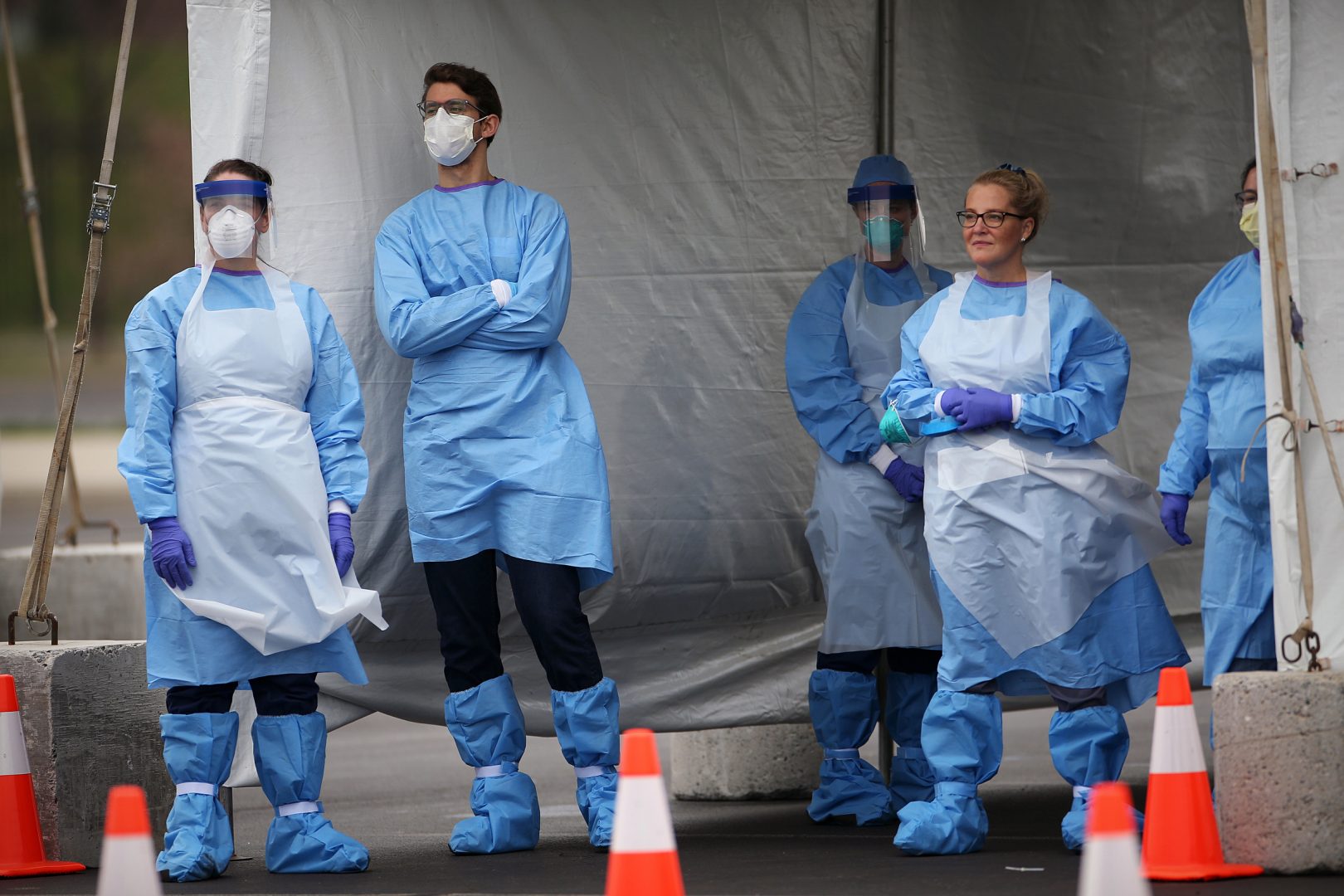 Medical workers wait for cars to pull up to the swabbing tent at the city's coronavirus testing site next to Citizens Bank Park in South Philadelphia on Friday, March 20, 2020. The site, which opened Friday afternoon, is the first city-run drive-through location where people can be swabbed to determine if they have the coronavirus. At the time of opening, it was only for people with symptoms who are over 50 and healthcare workers with symptoms.

(State College) — Free COVID-19 testing at the Nittany Mall in State College began Friday, drawing a long line of residents, as part of the Pennsylvania Department of Health’s effort to contain the rising case numbers in Centre County.

Naomi Niyah, a graduate student at Penn State, went to the site on Friday morning. She said she hasn’t been contacted by the university for its surveillance testing program.

“I don’t like the current situation for testing so might as well do it myself here,” Niyah said.

She doesn’t consider Penn State’s testing goal to be effective. Penn State has promised to test about 700 students, faculty and staff across all campuses every day.

Niyah said she teaches an in-person class and she’s had a couple of students who tested positive for COVID-19. But by the university’s definition, she’s not considered a close contact and isn’t included in the contract tracing process, which has her worried.

“All of us in my cohort are pretty annoyed with this,” Niyah said.

Penn State saw another jump in cases among University Park students on Friday.

The pop-up test site at Nittany Mall will be open on Sept. 25, 26, 29, 30, Oct. 1, 2 and 3 between 7 a.m. and 7 p.m. each day. The Department of Health has signed a contract with AMI Expeditionary Healthcare to conduct nasal swab tests for up to 500 individuals each day, whether they are symptomatic or not.

Those who want to get a free test at the pop-up site can choose either the walk-in or drive-thru option. Registration is done on-site with an ID or insurance card, and results will be returned via email within 24 hours, according to Dr. Jorge Simental, the lead physician for COVID-19 testing at AMI.

Simental said those who test positive will receive a phone call with the result, and the Department of Health will follow up with its contact tracing process.

“We’re here to test whoever wants to be tested,” Simental said. 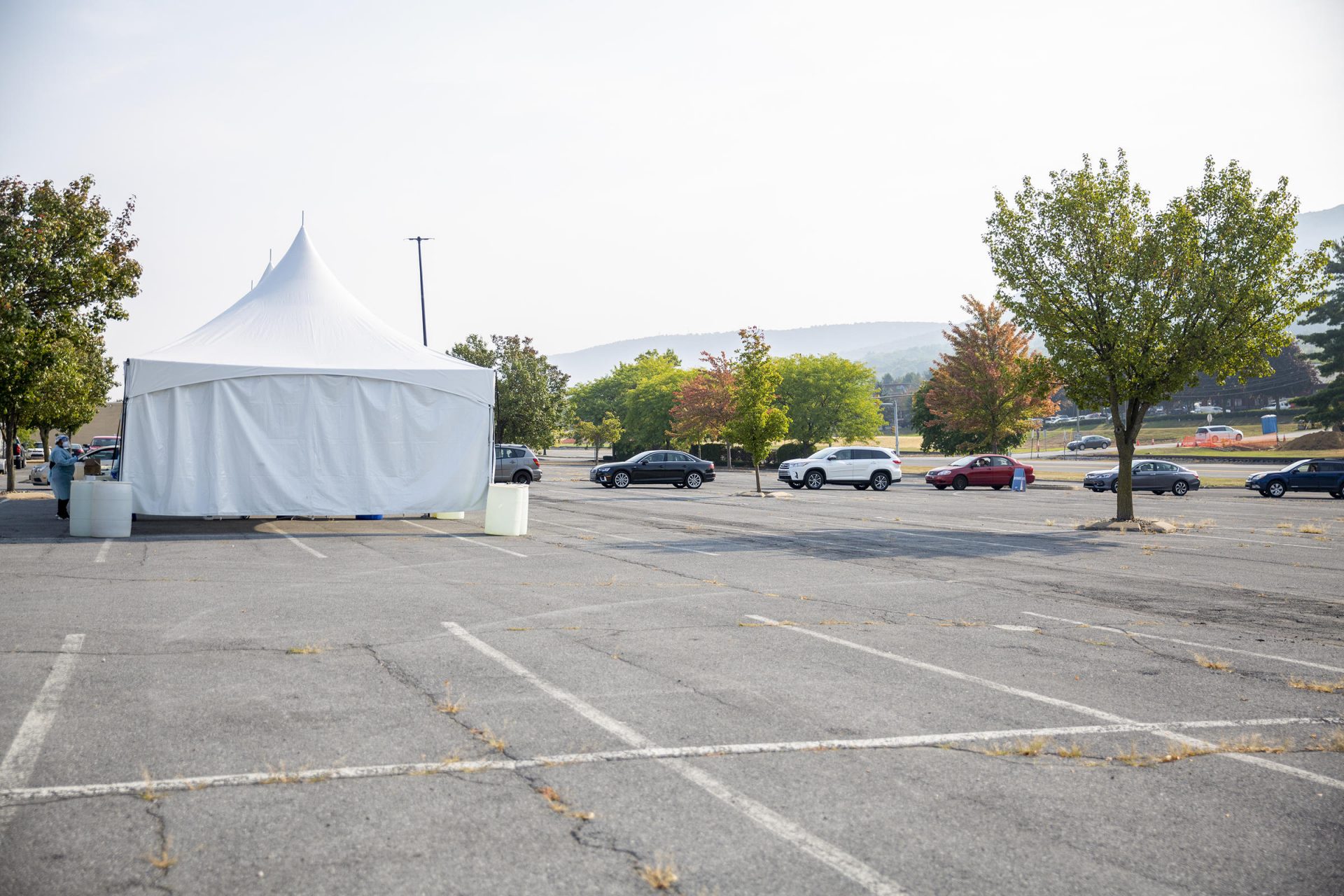 A line of cars waiting at the pop-up test site at Nittany Mall in State College.

He said ideally, the process should take about 15 minutes. But as of Friday morning, individuals in at least a dozen cars have waited for more than three hours to get their tests done.

Karen Kline, a retired resident of Clinton County, got in line just before 8 a.m. By 10 a.m., there were still half a dozen cars in front of her. But she said being able to get a free test without having to get a doctor’s referral is a good thing.

“You read a lot about the idea that you don’t have symptoms but you might be a carrier,” Kline said. “I do not have any symptoms, but I’m of an age when I’m mindful of the effect that it might have on other people who may have health problems. And so I want to be sure that I’m not spreading something I don’t even know I have.”

Simental said the site had processed between 70 and 80 people in the first hour and half after opening at 7 a.m. He said delays may happen in waves.

“A lot of people are working and they come here before work, they want to get the test done. So you have six, seven cars waiting and that created a little congestion at the beginning,” he said. “And I think we’re going to expect that for the most part every morning. We’re going to have congestion. So what we’re doing now is adjusting our schedule, so we’re going to try to be here a little bit earlier to try to take care of those people right away.”

As of Friday, the Department of Health reported there are 2,231 known cases of the coronavirus in Centre County. The county continues to top the incidence rate statewide, according to the department’s COVID-19 Early Warning Monitoring System Dashboard.

A similar pop-up test site is offering free tests in Bloomsburg, where the state said a substantial level of community spread of COVID-19 is taking place as well.

School attendance in the COVID era: What counts as 'present'?