Liam Whomsley, 8, and his brother Conor, 10, said they wanted to return to in-person school.

“The fact is we pay for this school district,” said Felix Zvarick, a 51-year-old technical analyst who has two sons in Downingtown schools. “We aren’t getting our money’s worth … I am doing 50% of the teacher’s job in my household.”

(Philadelphia) — About 60 parents and children rallied in suburban Chester County Monday evening to protest pandemic restrictions on in-person school and sports — a reflection of the simmering frustrations many families have been grappling with since school went virtual in March.

“The fact is we pay for this school district,” said Felix Zvarick, a 51-year-old technical analyst who has two sons in Downingtown schools. “We aren’t getting our money’s worth … I am doing 50% of the teacher’s job in my household.” 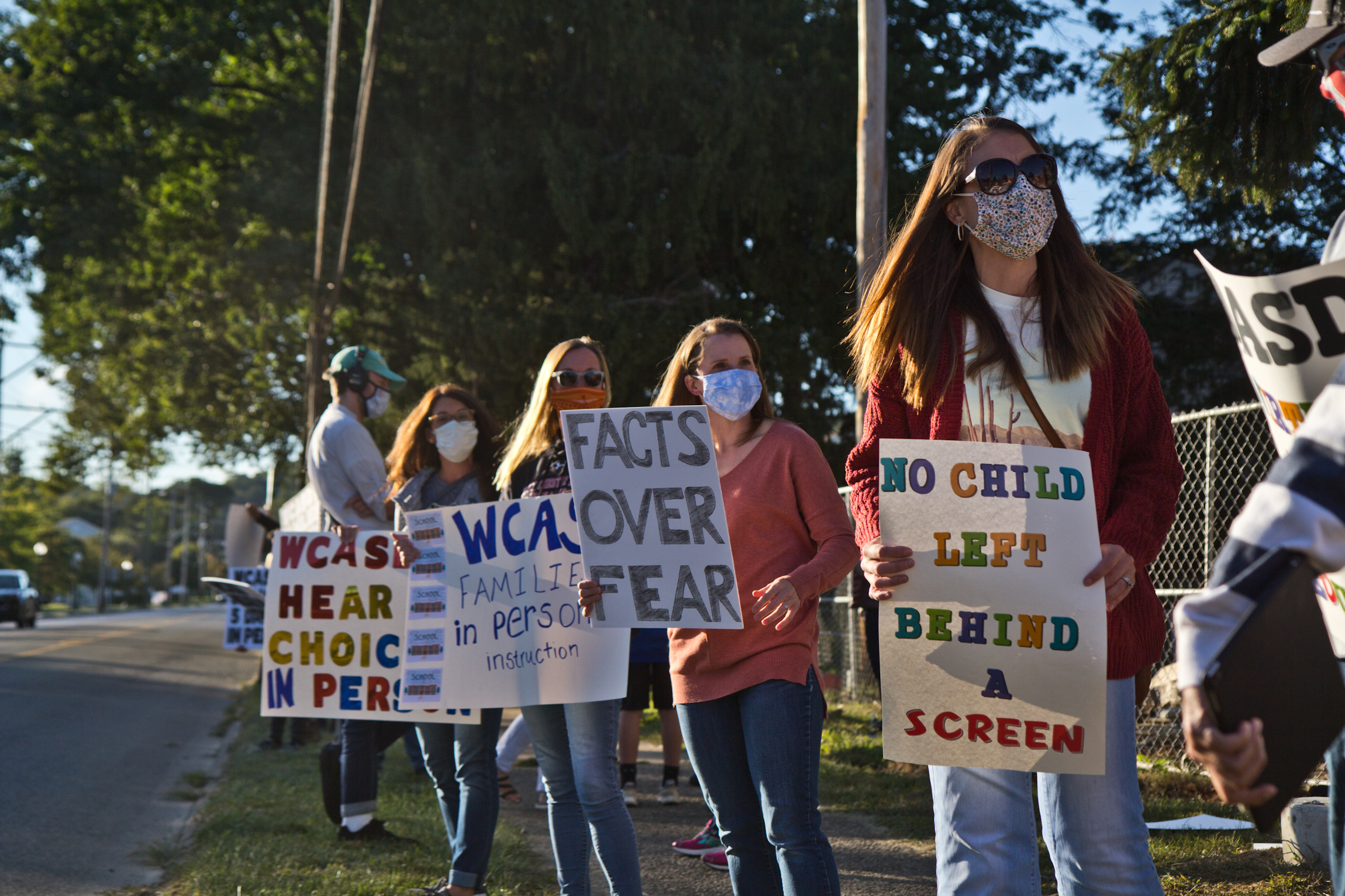 Parents and students from the Downingtown and West Chester, Pa., School Districts held a roadside protest Monday to demand administrators allow in-person learning for families that want it. (Kimberly Paynter/WHYY)

Stacy Whomsley, 43, runs a local Facebook group for parents who want a return to in-person instruction that has more than 800 members. Whomsley, who works at the drug company Pfizer, said the data does not justify the decision by the West Chester Area School District, where her two sons go to school, to begin the school year entirely online.

Gov. Tom Wolf’s administration left the decision of when and how to resume in-person schooling to individual school districts. According to an analysis by PLS Reporter, almost all of the southeastern part of the state opted to begin remotely. Downingtown Area School District and West Chester are currently planning to move to a hybrid model by November. 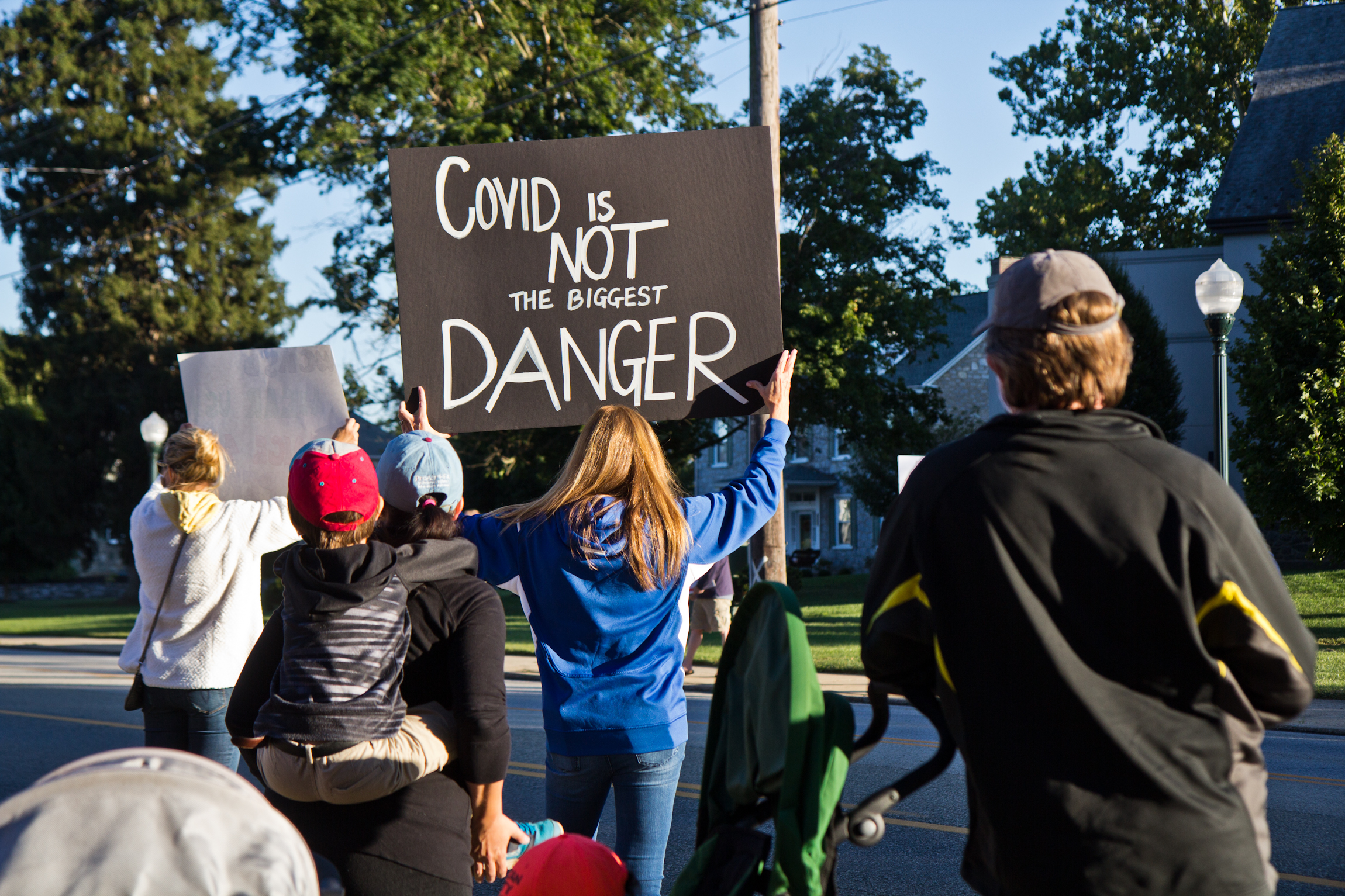 Parents and students from the Downingtown and West Chester, Pa., School Districts held a roadside protest Monday to demand administrators allow in-person learning for families that want it. (Kimberly Paynter/WHYY)

Jason Oliver, 34, decided to pull his two children, ages 5 and 7, out of Downingtown schools at the start of this year when it became clear they were starting virtual.

“I grew up in public school and have family members who are public school teachers, so telling them we were doing homeschooling was intense,” he said. “But they understood.”

The protest had the feel of a political rally: A stereo blared classic rock tunes, and at least three Republican candidates for the state Legislature glad-handed through the crowd. Passing drivers honked their approval, eliciting cheers from the protesters.

Patrice Silver, 51, said she was especially frustrated by Wolf’s restrictions on crowd sizes at youth sporting events, describing the lengths a friend has been going to watch her daughter’s soccer games.

“She has to stand behind a fence so she isn’t seen to watch her daughter play her sport,” Silver said. “It’s ridiculous.”

The safety of school sports has become a flashpoint in the tug of war between Wolf, a Democrat, and the Republican-controlled Legislature, which have been chafing under his pandemic restrictions for months. 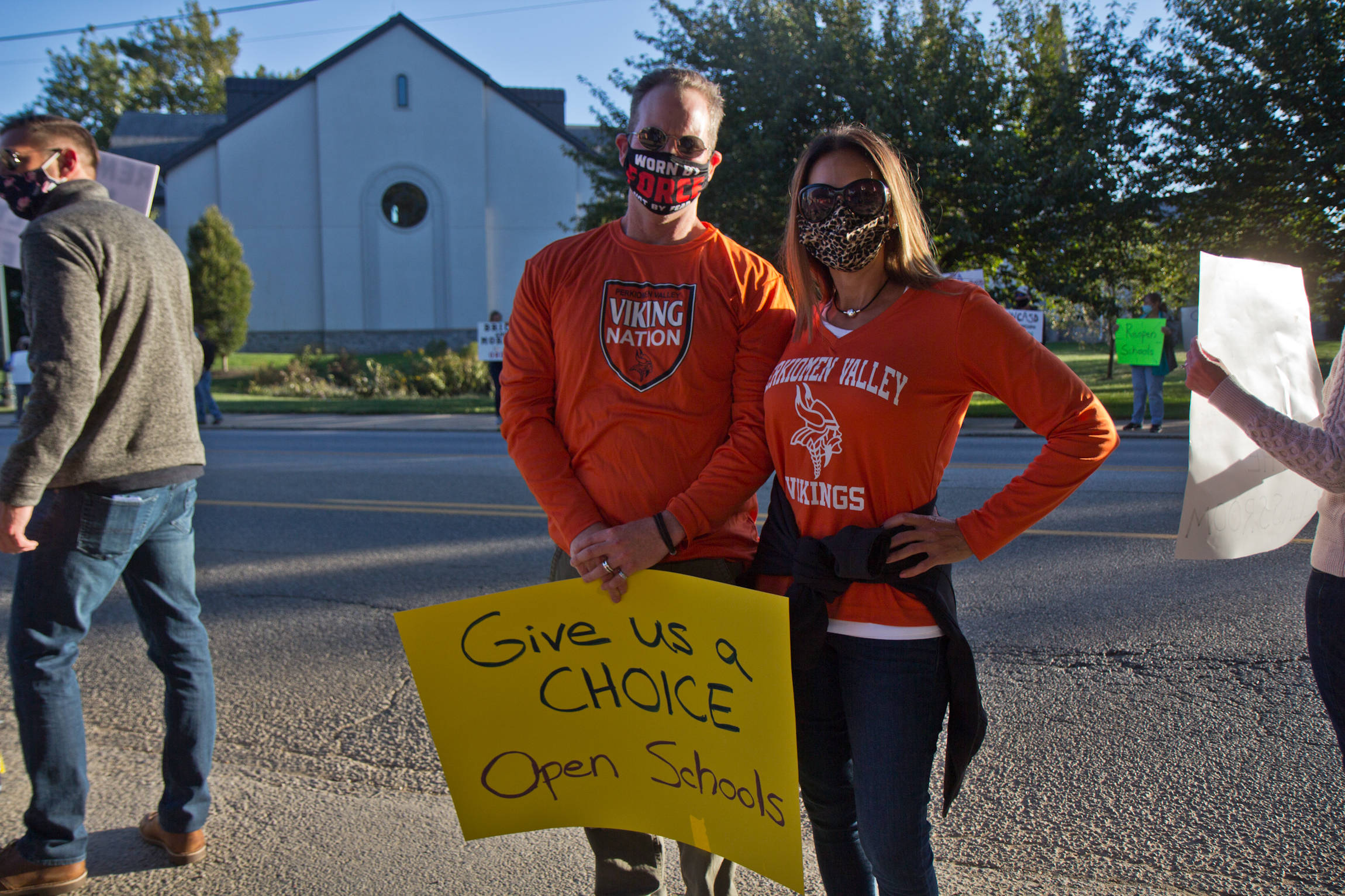 On Monday, Wolf vetoed a bill passed by the Legislature that would give school districts the sole ability to make decisions on sports, including on whether to allow spectators. School sports are currently permitted, but attendance is limited to 25 people indoors, 250 outdoors.

“I’m always amazed at politicians thinking that they can somehow wave a magic wand and suspend, sort of, reality,” Wolf said at a press conference.

However, the sports bill was passed by a veto-proof two-thirds majority in both houses, and Republican lawmakers vowed to override the veto.

Patrice Silver’s husband Lance, 51, nodded vigorously in agreement with his wife’s concerns. He sported a black facemask with big red letters reading, “Worn by force, not by fear.”

“It means I’m only wearing this so I can get into stores,” the Schwenksville resident said. “I don’t care about this virus. It’s not going to do anything to me.”