(Philadelphia) — A committee of 18 people is leading the search for Temple University’s next president, but a group of faculty, Pennsylvania state representatives, and residents who live near the North Philly campus worry the group of mostly white men won’t make the right hire.

“Are those committee members appropriately diverse? Do they possess the ability to understand, communicate with and interact with Temple’s increasingly diverse community?” asked Rev. William Moore of Tenth Memorial Baptist Church at a protest Monday morning calling out the university’s search committee.

In July, Richard Englert, Temple’s current president, announced plans to retire next year and so began a national search for his replacement.

The lack of a single Black woman or neighborhood resident drew fierce backlash from the group, which gathered at North Broad Street and Montgomery Avenue Monday morning to express skepticism that a mostly homogenous committee can hire a culturally competent president. 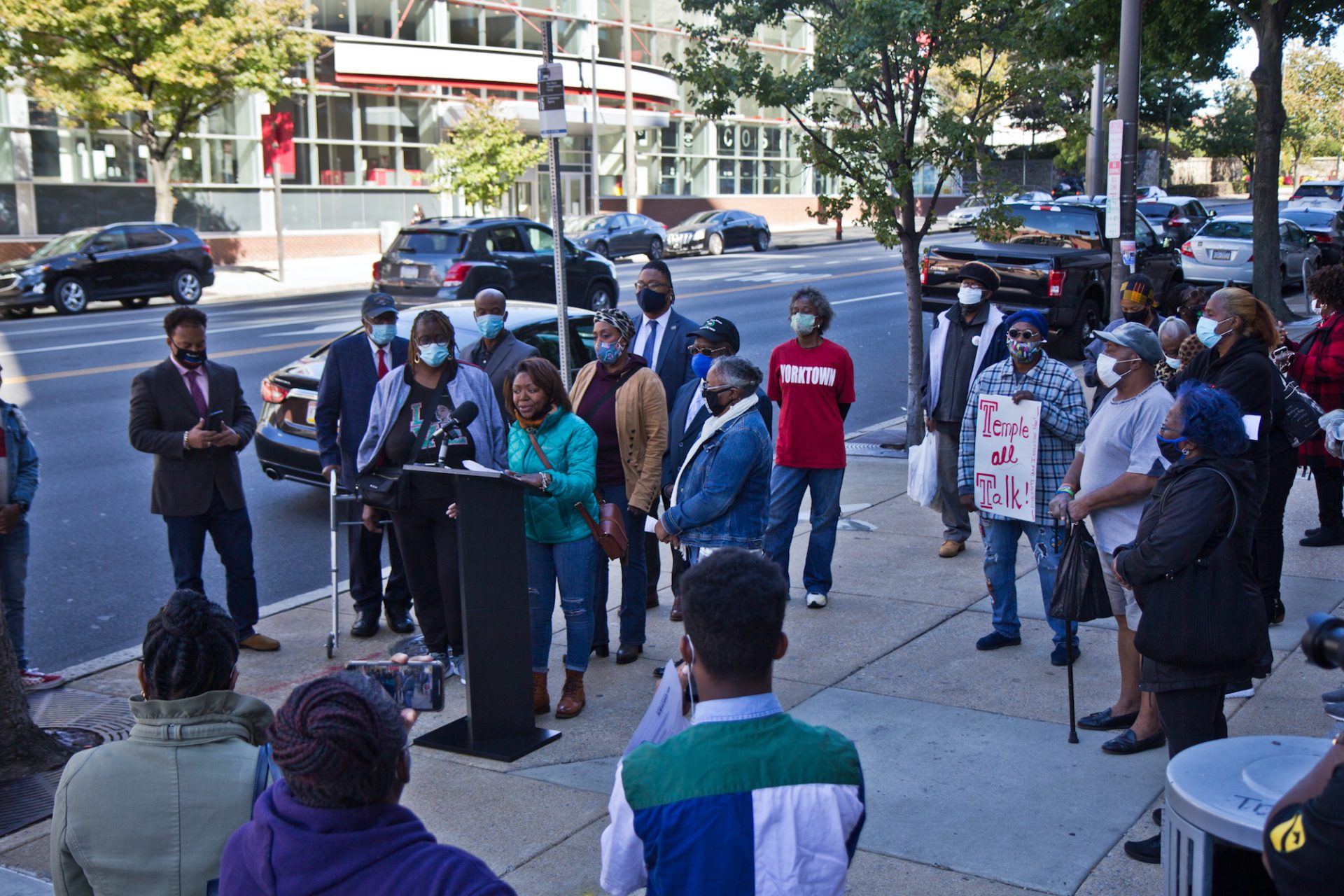 “Representation matters,” said Steve Newman with the Temple Association of University Professionals. “If the room where it happens lacks diversity, then the decisions that get made there will not be informed by the invaluable experience of these groups and the hard-earned wisdom that comes with them.”

Ahead of Monday’s event, Mitchell Morgan, chair of the university’s board of trustees, announced the addition of Kimmika Williams-Witherspoon and Valerie Harrison, who are both Black women, to the group Sunday night.

Williams-Witherspoon is Temple’s Faculty Senate Vice President and an educator at the School of Theater, Film and Media Arts. Harrison is a former interim president of Lincoln University and Senior Advisor to the President for Equity, Diversity and Inclusion.

The additions are welcome first steps, said activists and state lawmakers, but not enough.

In addition to the committee’s lack of diversity, North Philly residents at Monday’s event were critical they have not been represented in the search.

“This community is filled with people of color who are qualified, educated and more than capable of doing a search and research for a president for this university,” said Gale Loney, a longtime resident who has fought Temple on a number of issues that affect the university’s neighbors.

To Loney, the makeup of the committee thus far is yet another instance in which the university has promised to promote diversity and inclusion — just last week, the university announced it would commit more than $1 million in funding to fight racism — but does little in terms of action. 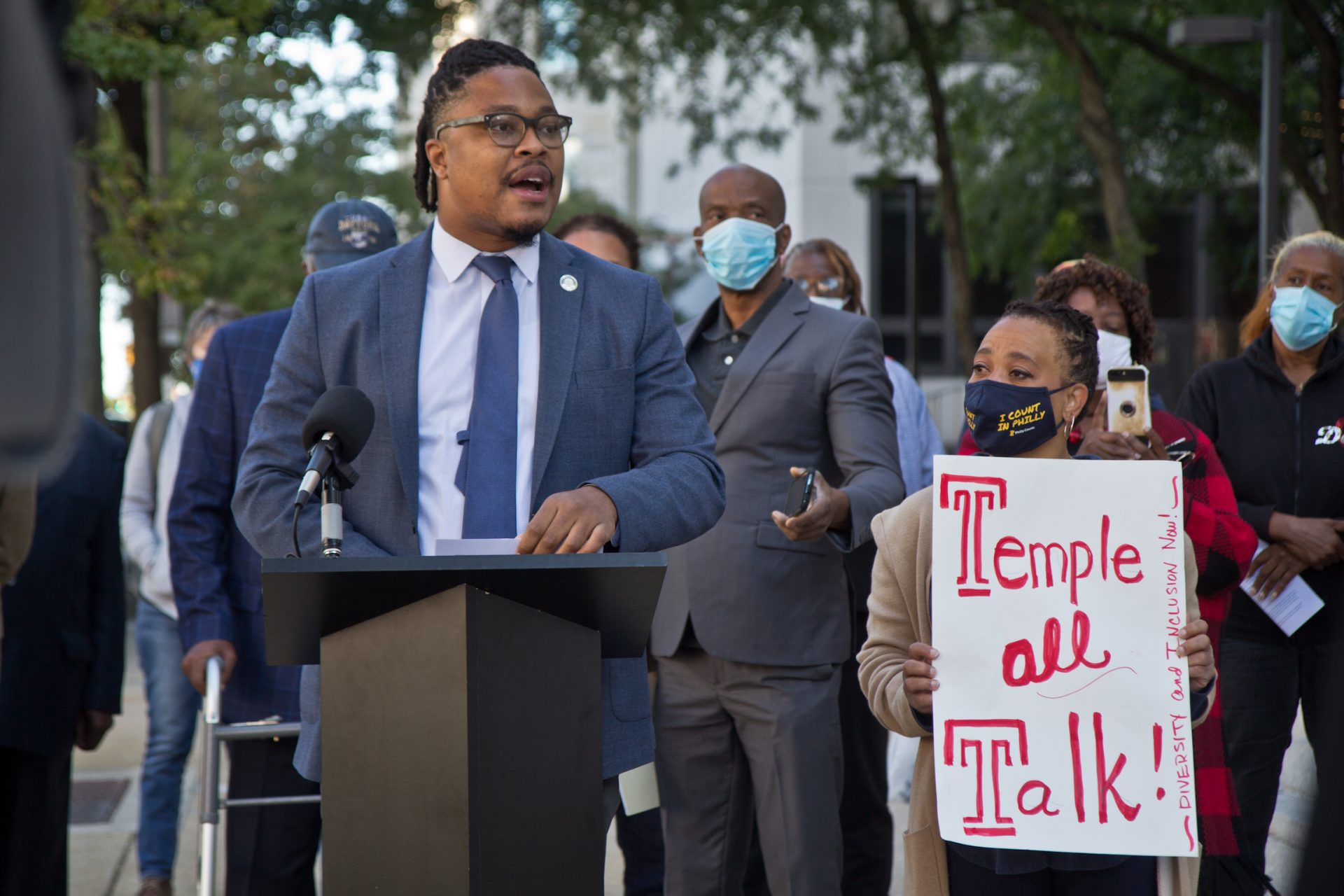 Pa. State Rep. Malcolm Kenyatta led a press conference on the campus of Temple University demand their Board of Trustees for a more inclusive and diverse search committee for a new University President.

Democratic state Rep. Malcolm Kenyatta, whose district includes the university’s North Philly campus, said even if the current committee picks a person of color to lead the university, the way Temple has handled the search so far raises questions about how committed the institution is to creating positive change.

In an email to students Friday, Morgan said the university would hold a series of town halls to define the needs for the next university president. The town halls will be open to the community, alumni and current Temple students, faculty and staff, said the email.

A university spokesperson said Monday there is no information regarding the possibility of additional changes to the current search committee.

Kenyatta said he and residents — taxpayers who help fund the school — will keep pushing for the committee to reach racial and gender parity and include at least one local resident in the group.