Andrea Lerner, left, and her husband, Ira Lerner, sift through the mail of mail-in applications at the Voter Registration office in the Lehigh County Government Center in Allentown, PA., on Tuesday, September 15, 2020.

"I think there's a lot of confusion out there and then they just want to be certain that their applications are in, so they can vote no matter how they want to vote." 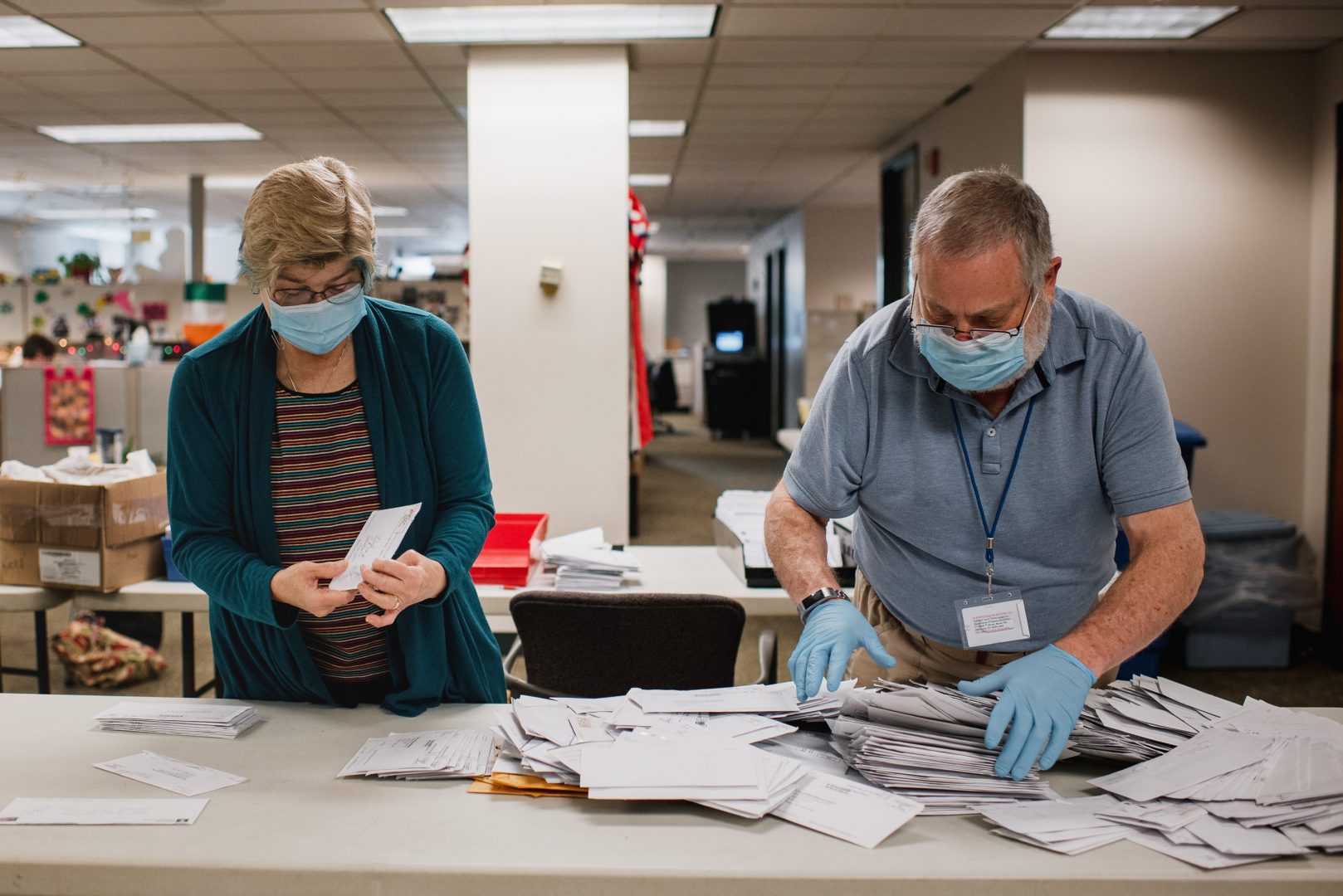 Andrea Lerner, left, and her husband, Ira Lerner, sift through the mail of mail-in applications at the Voter Registration office in the Lehigh County Government Center in Allentown, PA., on Tuesday, September 15, 2020.

(Scranton) — Election workers around the country are preparing for what could be one of the most chaotic elections in history. There’s not only a pandemic, but dozens of ongoing legal fights over voting rules. That’s left a lot of things up in the air only weeks before Election Day.

In election offices such as the one in Lehigh County, Pa., workers are trying to deal with the uncertainty.

Phones in this office, staffed by nine full-time employees and some part-timers, have been ringing nonstop, as voters try to check the status of their registrations and absentee ballot requests. Maureen Linkhorst says many callers are looking for reassurance in an election already turned upside down by the threat of disease and political controversy.

“We anticipate receiving the ballots by the end of September, beginning of October, but that’s not definite,” Linkhorst tells one voter over the phone. She explains that things were delayed because state Democrats were in court trying to keep Green Party candidates off the ballot.

“I think there’s a lot of confusion out there and then they just want to be certain that their applications are in, so they can vote no matter how they want to vote,” she says.

It’s no wonder voters are confused. Pennsylvania’s Democratic governor and Republican state legislature — as well as the national political parties and campaigns — have been at odds over when mail-in ballots have to be received, how they can be delivered and even when they’ll be counted. The state Supreme Court ruled on some of the issues Thursday, but not all, and it’s not clear what changes might still be made. Election ballots sit in a bin at the Voter Registration office in the Lehigh County Government Center in Allentown, PA., on Tuesday, September 15, 2020.

That has election workers everywhere doing what they can to adjust.

In Lehigh, election worker Andrea Lerner sits in front of a large bin of absentee and mail-in ballot envelopes. “These are stickers,” she explains, “I’m taking the back off and cutting them in half and putting each one on.”

Lerner is replacing out-dated language on the backs of the envelopes, which were printed before the state legislature approved a law allowing people to vote in person, as long as they bring their absentee ballots to the polling site to be voided. Before, they could only vote a provisional ballot.

“So we’re putting new language on there so that the voters understand exactly what it is they’re supposed to be doing,” says Lerner.

Still, Election Director Timothy Benyo admits the wording could change again before Election Day, depending on what happens to a voting bill now working its way through the legislature. Morris Romig drops off his voter mail-in ballot application at the Voter Registration office in the Lehigh County Government Center in Allentown, PA., on Tuesday, September 15, 2020. Romig said he’s worried about fraud and doesn’t know who to believe. He said he’s going to vote one way or another in this election.

This is the least of his worries. Like most election officials, Benyo has to basically run two elections this November — one in person and another by mail. That means finding and staffing the usual number of polling sites while dealing with an unprecedented number of mail-in votes.

Benyo says pollworker recruitment is going pretty well. The county needs about 1,200-1,500 volunteers overall to staff 159 polling sites. But some of the usual locations, like churches and schools, have pulled out because of the coronavirus, so he still has to find replacements.

“It’s hard to train the pollworkers too because we don’t know exactly what the rules are and if they’re going to change,” he says. Then Benyo laughs, “We’re rolling with it. Making it up as we go along.”

He notes that about 100,000 county voters — more than half — are also expected to vote by mail this year. That means not only printing and sending out all those ballots, but getting them returned, processed and counted. Chief clerk of regulations and elections Tim Benyo stands for a portrait at the Voter Registration office in the Lehigh County Government Center in Allentown, PA., on Tuesday, September 15, 2020.

A court ruled Thursday that the county can provide drop boxes where voters can deposit their ballots. Republicans had been trying to block their use. But it’s not clear there’s enough time to order them before Election Day. For now, the county has extended office hours in October so voters can return their ballots in person if they don’t want to rely on the postal service.

Counting those ballots is another concern. Benyo has purchased two high-speed envelope openers to speed up the process. It took the county three days to count ballots in the primary, when the volume was much lighter. Right now, the county can’t start processing mail-in ballots until 7 a.m. on Election Day, although that too could change.

Benyo knows it will be a challenge because his office has already been flooded with absentee and mail-in ballot requests.

In fact, four full bins of mail arrive early Monday morning. Worker Ira Lerner dumps them out and spreads the envelopes across two long tables, so he can spray them with disinfectant, just to be safe. All the workers here wear facemasks and gloves as they sort the mail into piles to be processed. A mailer shows President Trump encouraging mail-in voting, despite his vocal opposition to it.

Many of the ballot requests come through third-party groups that are encouraging Pennsylvanians to vote by mail. Most are from a Democratic-leaning nonprofit called the Center for Voter Information. But there are also some from Republican groups — despite President Trump’s outspoken opposition to mail-in voting and unfounded allegations that it leads to widespread fraud. Several of the envelopes bear a picture of a stern-looking Trump, next to the words — “President Trump wants YOU to return this form!”

The problem for election workers is that voters have been sending in two, even three ballot requests because they’re so confused. Clerks have to check the files to weed out the duplicates.

“If they requested a ballot, they would write dupe on top, D-U-P. The dupes go here,” says Lerner, pointing to a separate bin.

Good record-keeping here is paramount. Other workers are constantly checking state records and even newspaper obituaries to make sure they don’t send ballots to someone who has moved or died.

This day’s mail also includes a pleasant surprise. Andrea Lerner picks up an envelope with three big stars drawn on the outside. Inside is a voter’s message, written in bright green marker and signed with a heart.

‘I will only be voting in person. Looking forward to meeting my fellow Americans at the polls on November 3rd,'” reads Lerner, adding, “That’s so much nicer than the usual angry diatribes that we get!”

There have been a few of those, both in the mail and over the phone, and there could be more in the weeks ahead. Everyone here hopes things will go well in November, but they know these are confusing and unprecedented times. Ellen Ortt, 81, looks through old voter registration files at the Voter Registration office in the Lehigh County Government Center in Allentown, PA., on Tuesday, September 15, 2020. Ortt is looking to see which files need to be update with a new address or a party switch.

Voting victories for Democrats in Pa. might have closed the door on more election reform