The event marked the first time that Biden had faced live, unscripted questions from voters since winning the nomination.

(Moosic) — Joe Biden on Thursday went after President Donald Trump again and again over his handling of COVID-19, calling Trump’s downplaying of the pandemic “criminal” and his administration “totally irresponsible.”

“You’ve got to level with the American people — shoot from the shoulder. There’s not been a time they’ve not been able to step up. The president should step down,” the Democratic presidential nominee said to applause from a CNN drive-in town hall crowd in Moosic, outside his hometown of Scranton.

Speaking about Trump’s admission that he publicly played down the impact of the virus while aware of its severity, Biden declared: “He knew it and did nothing. It’s close to criminal.”

Later, Biden decried Americans’ loss of basic “freedoms” as the U.S. has struggled to contain the pandemic, like the ability to go to a ballgame or walk around their neighborhoods. “I never, ever thought I would see just such a thoroughly, totally irresponsible administration,” he said.

Biden faced a half-dozen questions about the coronavirus and a potential vaccine in the town hall from moderator Anderson Cooper and audience members. The pandemic was not just the main topic of the night — it was the cause of the unusual format of the event: a drive-in with 35 cars outside PNC Field. 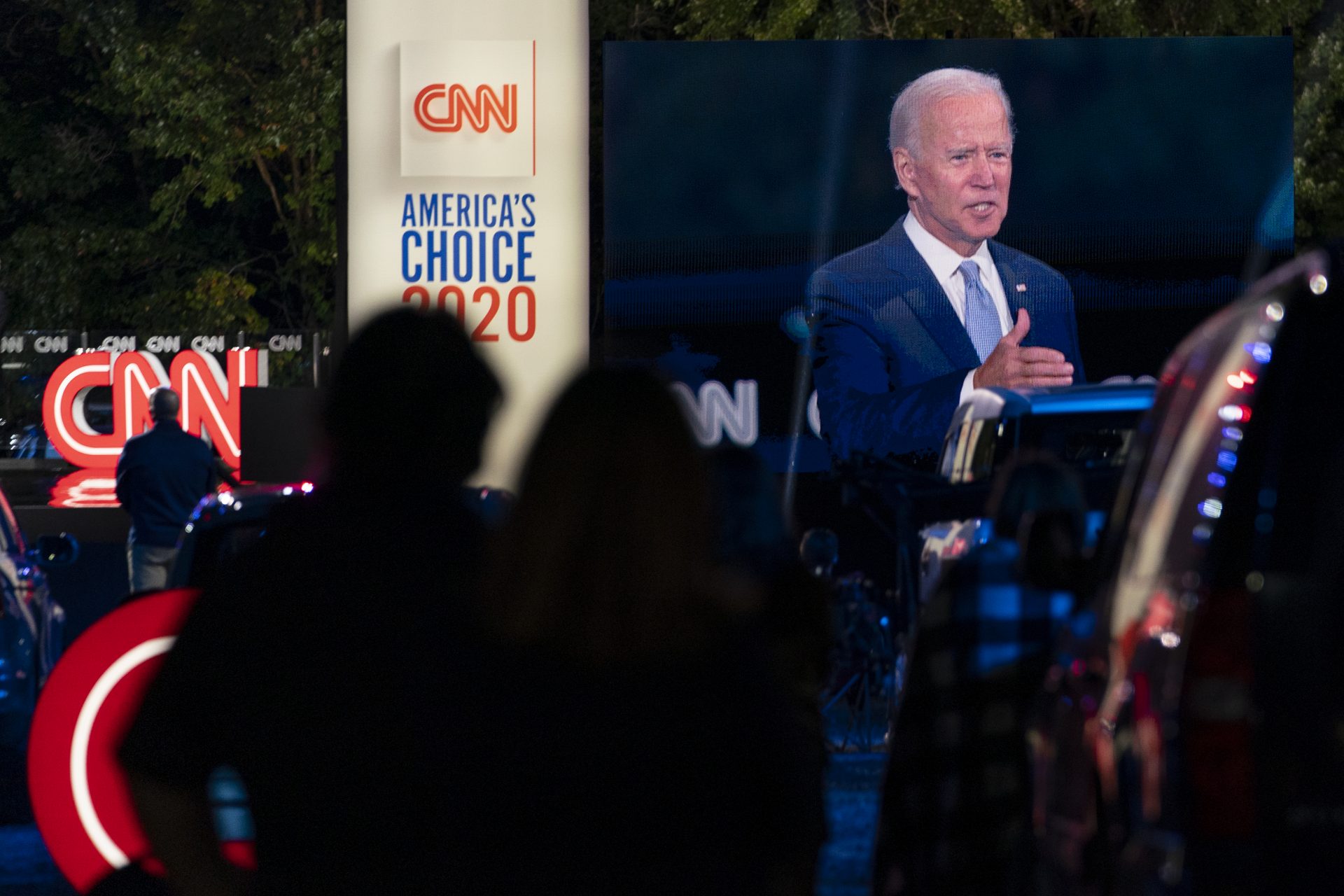 The cars were parked around the stage, each with small groups of people standing outside them or leaning or sitting on the hoods to watch Cooper and Biden onstage. The network erected blue and red spotlights over the dirt and gravel parking lot to make it easier to see, and each parking space was marked off with white chalk in large rectangles to ensure that each group stayed more than 6 feet (1.8 meters) apart.

The town hall marked the first time that Biden had faced live, unscripted questions from voters since winning the nomination. Trump participated in a town hall Tuesday in an auditorium in Philadelphia.

The appearances have been seen as tuneups before the three presidential debates, the first set for Sept. 29. Biden’s uneven debate performances during the Democratic primary contributed to his initial struggles in polls and the early primary vote, and Trump has pushed unfounded conspiracy theories about Biden taking performance-enhancing drugs and has raised questions about Biden’s mental acuity.

Biden, meanwhile, has promised to be a “fact-checker on the stage” with Trump but has said he doesn’t want to get drawn into a “brawl” with the Republican.

On Thursday, Biden said he was beginning to prepare for the upcoming debate by reviewing Trump’s remarks and preparing his own.

Biden was also pressed on his stance on the Green New Deal, the sweeping proposal from progressives in Congress that calls for achieving net-zero greenhouse gas emissions across the economy by 2030. Biden’s proposal doesn’t go as far, but it does aim to reduce emissions to zero by 2050 and has a goal of achieving an entirely carbon pollution-free power sector by 2035.

Biden interrupted a questioner who suggested his climate plan embraces the Green New Deal to insist, “No, it doesn’t,” but when asked by the moderator if he supports the proposal, he said, “I don’t think it’s too much.” 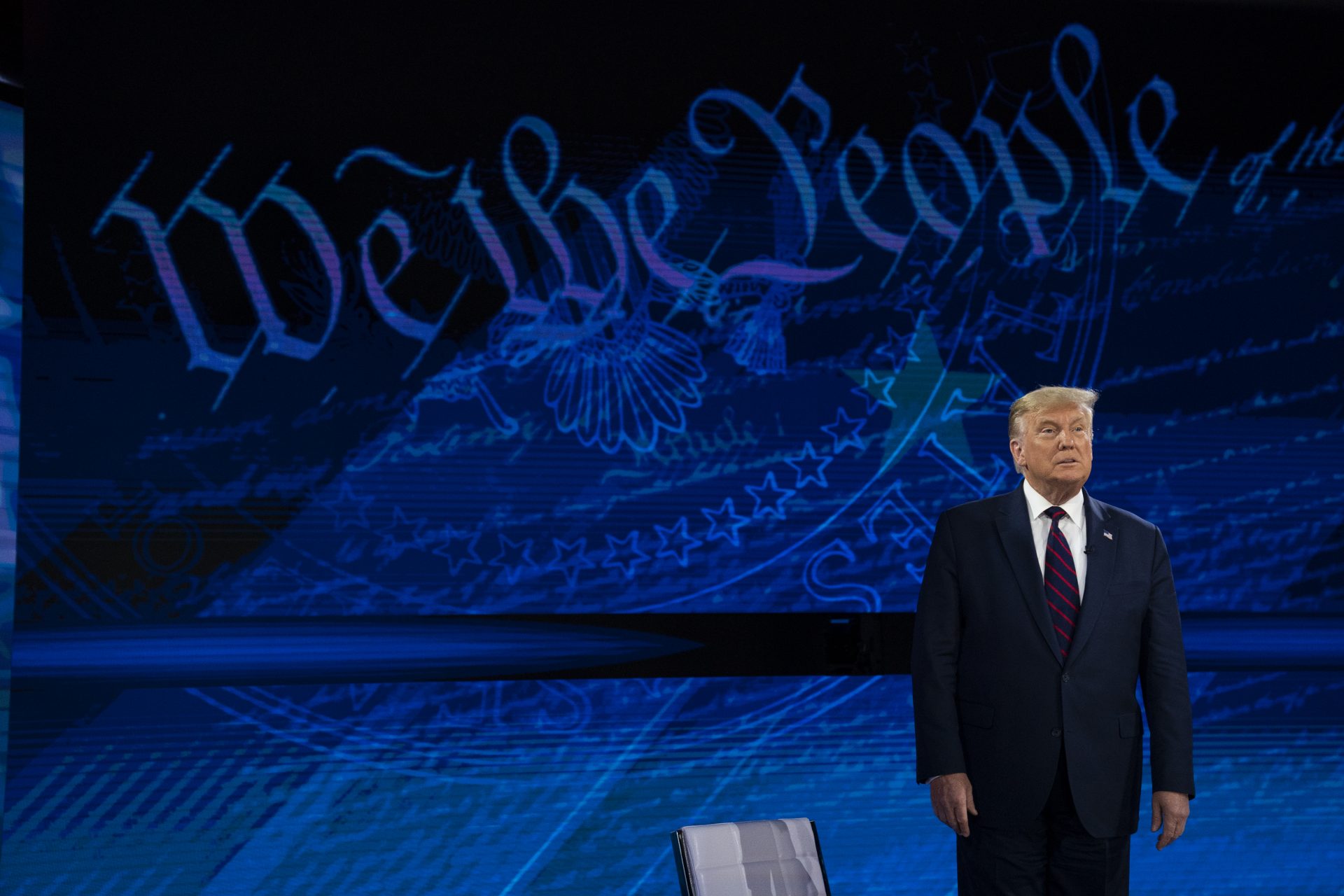 Still, Biden added, “I have my own deal,” which he noted the Democratic Party has incorporated as part of its platform.

Biden also weighed in on foreign policy issues, promising to reduce America’s military footprint abroad and saying that any attempt to interfere with the election by a foreign power is a “violation of our sovereignty.” He promised that if he’s elected and it becomes clear post-election that Russia interfered in the election, “they’ll pay a price for it, and it’ll be an economic price.”

Biden described Russia as an “opponent,” but declined to use the same word when asked about China. He instead called the nation a “competitor” and pledging to improve trade policy with China.

“I never, ever, ever thought I would see such a thoroughly, totally irresponsible administration,” Biden said.

Trump signaled he’d been watching the town hall before he took the stage for a rally in Misonee, Wisconsin, on Thursday night.

“I just see he’s up there tonight getting softball questions from Anderson Cooper. They don’t ask me questions like that,” Trump told the crowd gathered at the airport. “They’ve got cars … it’s the weirdest thing I’ve ever seen.”

The format of Biden’s event was a stark reminder of the issue that’s been a central focus of Biden’s campaign — that the pandemic rages on, affecting Americans’ lives in ways large and small, and that stronger leadership in White House could have eased the crisis. More than 195,000 Americans have died of the coronavirus — by far the highest death toll in the world.

Earlier in the day, Biden joined Senate Democrats for a conference call lunch and told allies that he is taking nothing for granted in the race for the White House and the down-ballot effort to wrest the Senate’s majority control from Republicans. He fielded questions, particularly from senators facing reelection, about his strategy win back the chamber and defeat Trump.

“He just said, ‘You know what we’re up against. You know why this is so important,’” said Sen. Debbie Stabenow, D-Mich.

West Virginia Sen. Joe Manchin said he encouraged Biden to remind workers how much he has been on their side during his many years in government.

Biden’s campaign team has come under scrutiny in recent days over its outreach efforts, particularly for what some see as short shrift with Latino voters. At the same time, Democrats have mixed views over the party’s get-out-the-vote effort that largely bypasses traditional door-knocking to avoid health risks during the pandemic, instead relying on virtual outreach.

Jaffe reported from Washington. Associated Press writers Lisa Mascaro and Darlene Superville in Washington and Bill Barrow in Atlanta contributed to this report.