WITF Music: Keys on the Move

With music venues closed amid the coronavirus pandemic, music still finds a way. 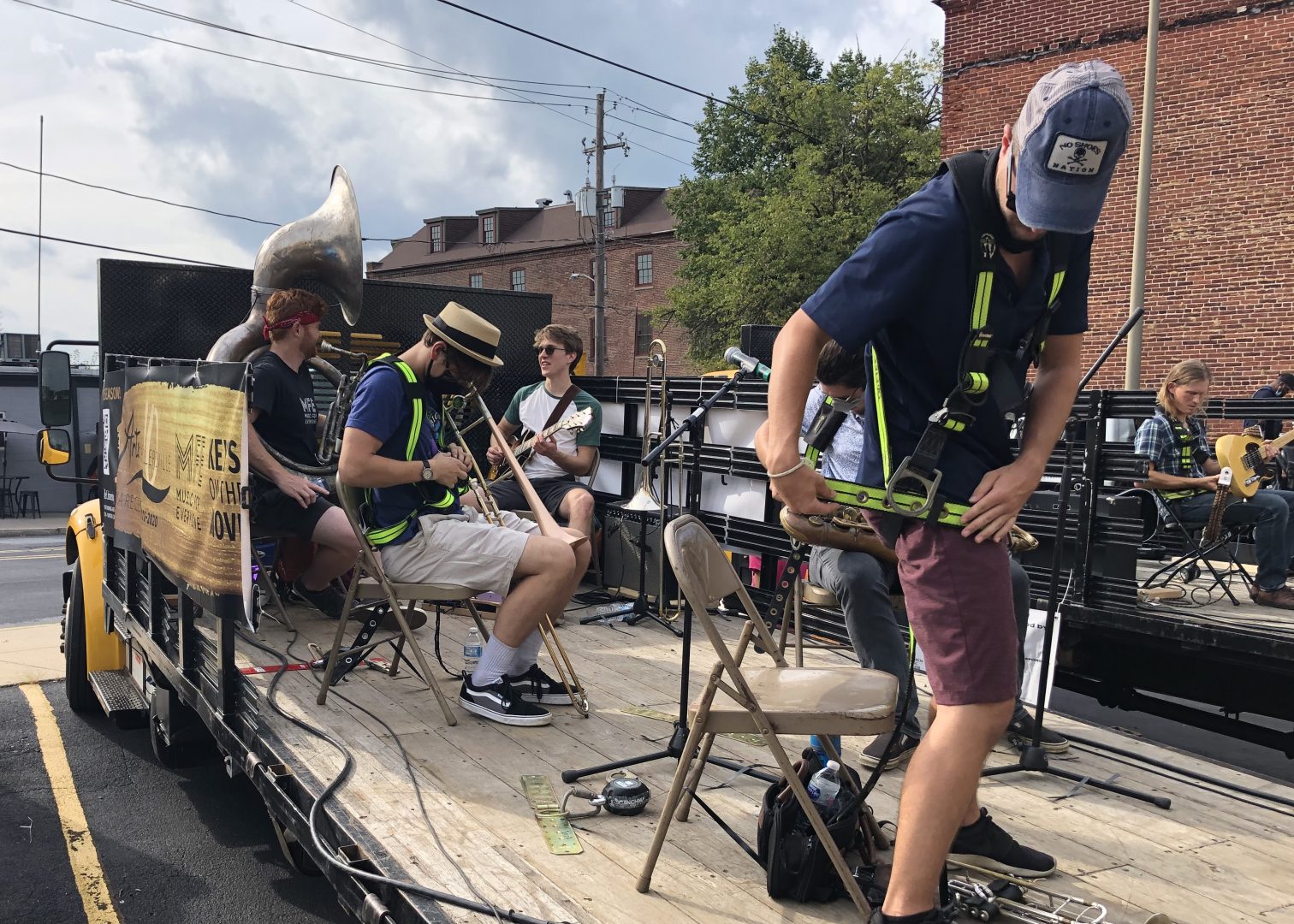 It’s about 5pm on a hot Friday night in August. In the parking lot of Shumaker, just off Harrisburg Avenue in Lancaster, a group of guys with masks on are standing next to three idling flatbed trucks and looking at a map.

What’s about to happen is called Keys on the Move, and it’s an effort by the Lancaster non-profit Music For Everyone to bring music to the residents of Lancaster City during the pandemic. It does that by strapping bands onto the beds of flatbed trucks and driving them around the city. They’ve been doing this each month over the summer as part of the city’s Music Fridays on the third Friday of each month.

Amidst idling trucks, bands sound-checking and musicians clicking in their straps to keep them from falling off the truck I caught up with Matthew Woodson of the Big Boy Brass band, one of the bands playing tonight. I was wondering if he had any anxiety about playing on a moving truck. 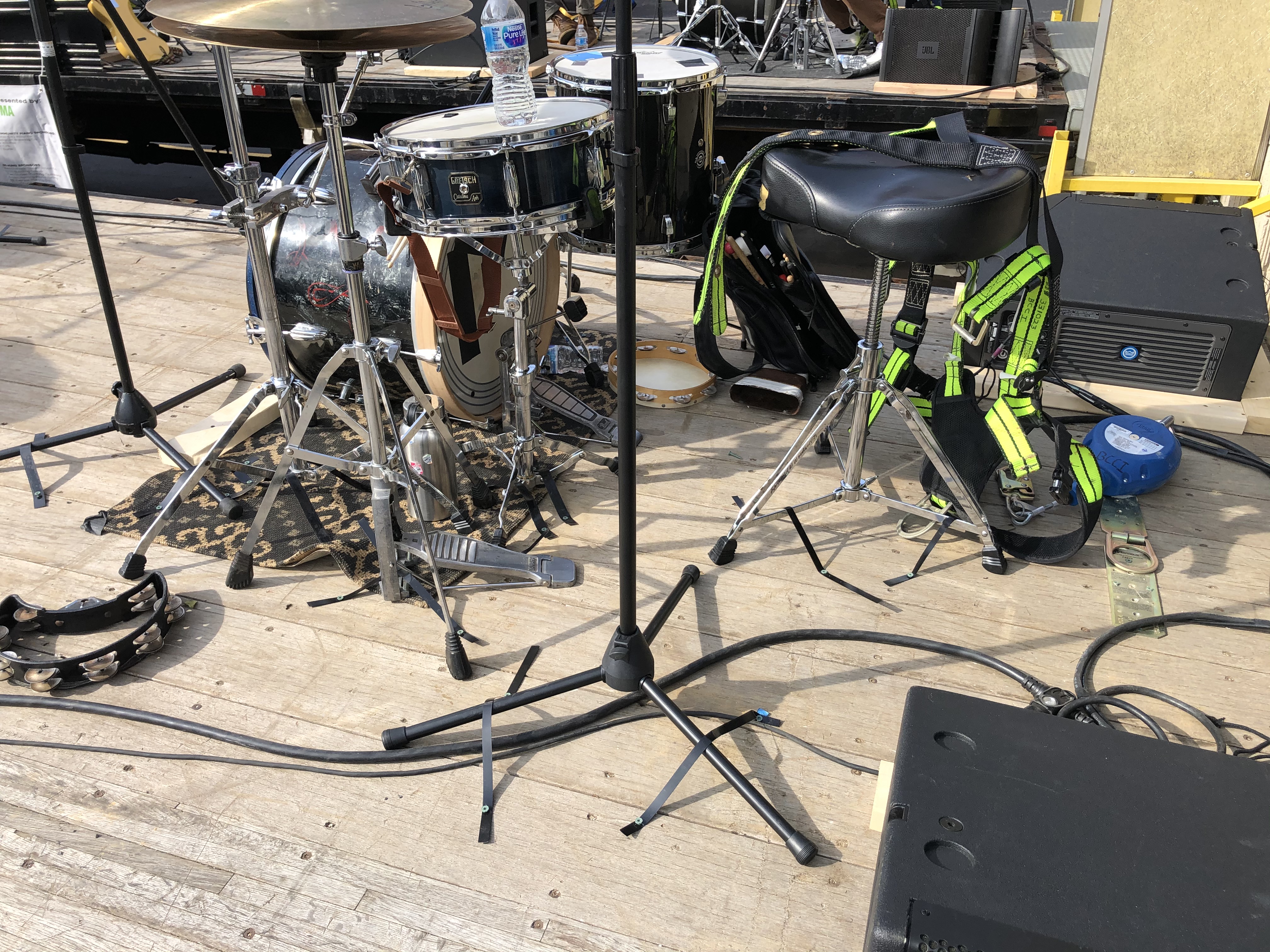 Music stands and gear strapped onto a flatbed truck.

“Um, a little bit. I mean I’ve never played on a moving truck. But I feel good. We’re strapped down. It should be fun. We’ve played on a flatbed before when it was stationary. It wasn’t physically moving.”

The other two trucks have The Benjamin Vo Blues Band and Andy Mowatt‘s band. It’s just about 5pm when the bands all get started playing and the drivers get into the cabs. One by one they very, very slowly pull out of the parking lot and make their way down the streets of Lancaster.

“The whole goal of this is to spread … excitement about music and bring the city together around music and it seems like a perfect opportunity to do that,” says Brenden Stengle. He’s the Director of Operations for Music for Everyone and is talking as he’s steering the truck carrying the Big Boy Brass band.

“So we’re driving down James Street, people are coming out of their houses and their waving and smiling and dancing and just enjoying the music as it rolls by.”

It is impossible not to smile watching the looks of surprise and joy on the faces of everyone we pass by. Before we left for our drive around the city, I talked to Music for Everyone’s founder and executive director John Gerdy.

“We are a non-profit and our mission is to cultivate the power of music as an educational community-building/economic-driver/public-health/social justice tool in Lancaster County. It’s leveraging the power and potential of music to impact our community in a broad cross-section of areas.” 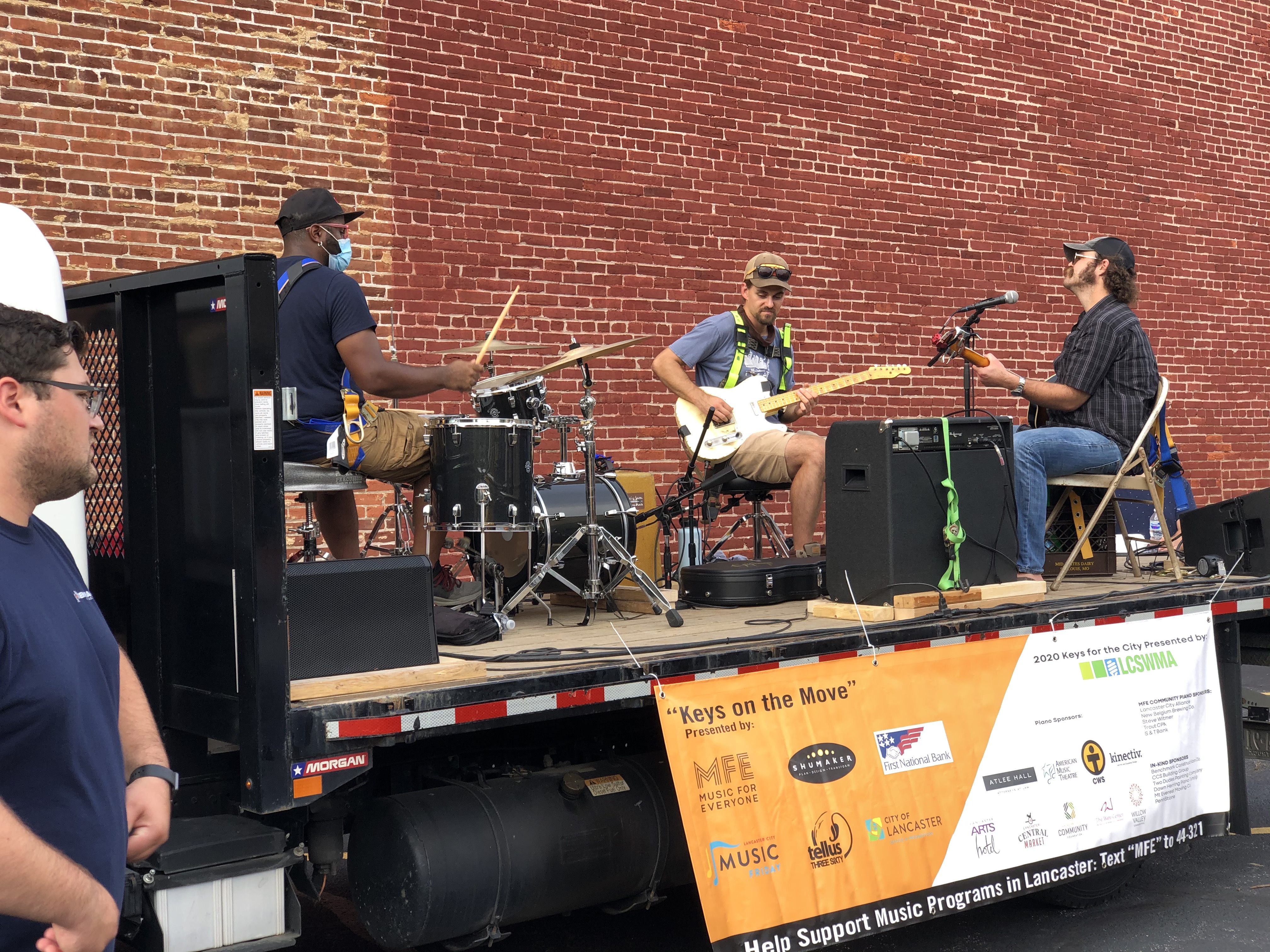 Andy Mowatt and his band.

And what does that look like in practice? It becomes obvious when you see the reactions of people in the streets as the music passes by. They’ve had some really memorable experiences with Keys on the Move.

“The best one,” says Gerdy, “was we passed by the county prison and people in prison [were] yelling out the windows. So you get a lot of moments like that…that shows the power of music to put a smile on peoples’ face, to bring people together and it’s an important tool that we have. We have the responsibility to try to access it in a way and leverage it in a way that benefits our community.”

In the truck, Stengle remembers another moment. “We also had … Emmanuel Nsingani playing … we had a sax player … the sax player kept running from point to point to point so he could jam with them at every intersection.”

Keys on the Move may happen again next summer as well, but the last one for this year is this Friday. So if you make your way into Lancaster city, just follow the music or find a nice spot and wait until it comes to you.

For 'Ike,' a monument unlike any other: Eisenhower Memorial is dedicated in D.C.