US President Donald Trump speaks during a briefing on wildfires with local and federal fire and emergency officials at Sacramento McClellan Airport in McClellan Park, California on September 14, 2020.

As more than two dozen wildfires roared across California alone, the president declined to acknowledge the role climate change likely played in fueling the flames. 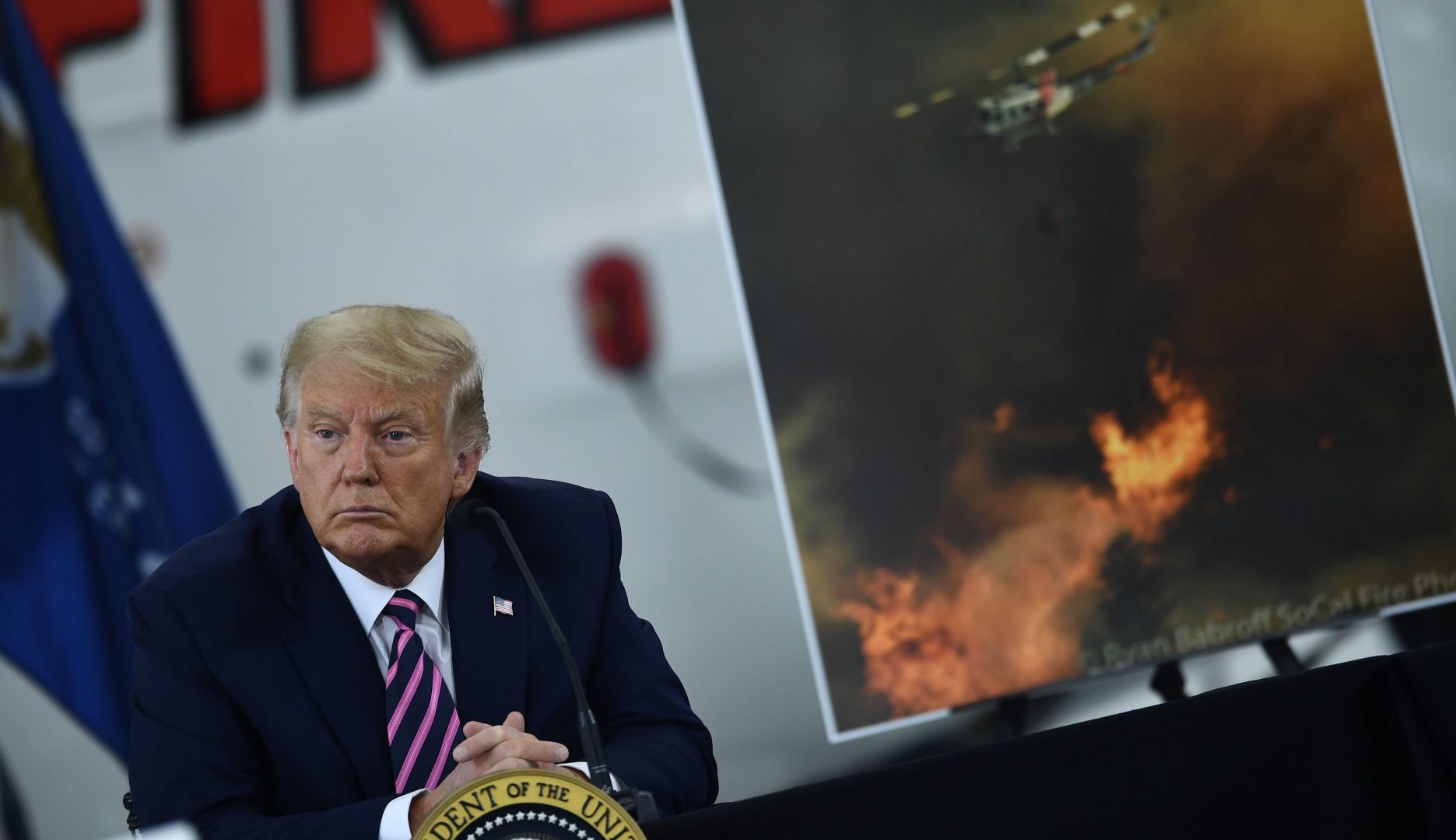 US President Donald Trump speaks during a briefing on wildfires with local and federal fire and emergency officials at Sacramento McClellan Airport in McClellan Park, California on September 14, 2020.

(McClellan Park, Calif) — With wildfires devastating the West and a hurricane bearing down on the Gulf Coast, President Trump, who has for years mocked and denied the reality of climate change, was briefed on Monday on the status of fires in California.

During his briefing, which included California Democratic Gov. Gavin Newsom, officials repeatedly invoked climate change and its impact on the state’s ability to manage the raging infernos.

Still, even as more than two dozen wildfires roared across California alone, Trump declined to acknowledge the role climate change likely played in fueling the flames.

“We’ve had temperatures explode this summer. … We want to work with you to really recognize the changing climate and what it means to our forests and actually work together with that science,” said Wade Crowfoot, California’s secretary for natural resources. “That science is going to be key because if we ignore that science and sort of put our head in the sand and think it’s all about vegetation management, we’re not going to succeed in protecting Californians.”

“It’ll start getting cooler. You just — you just watch,” the president said.

“I wish science agreed with you,” Crowfoot said. 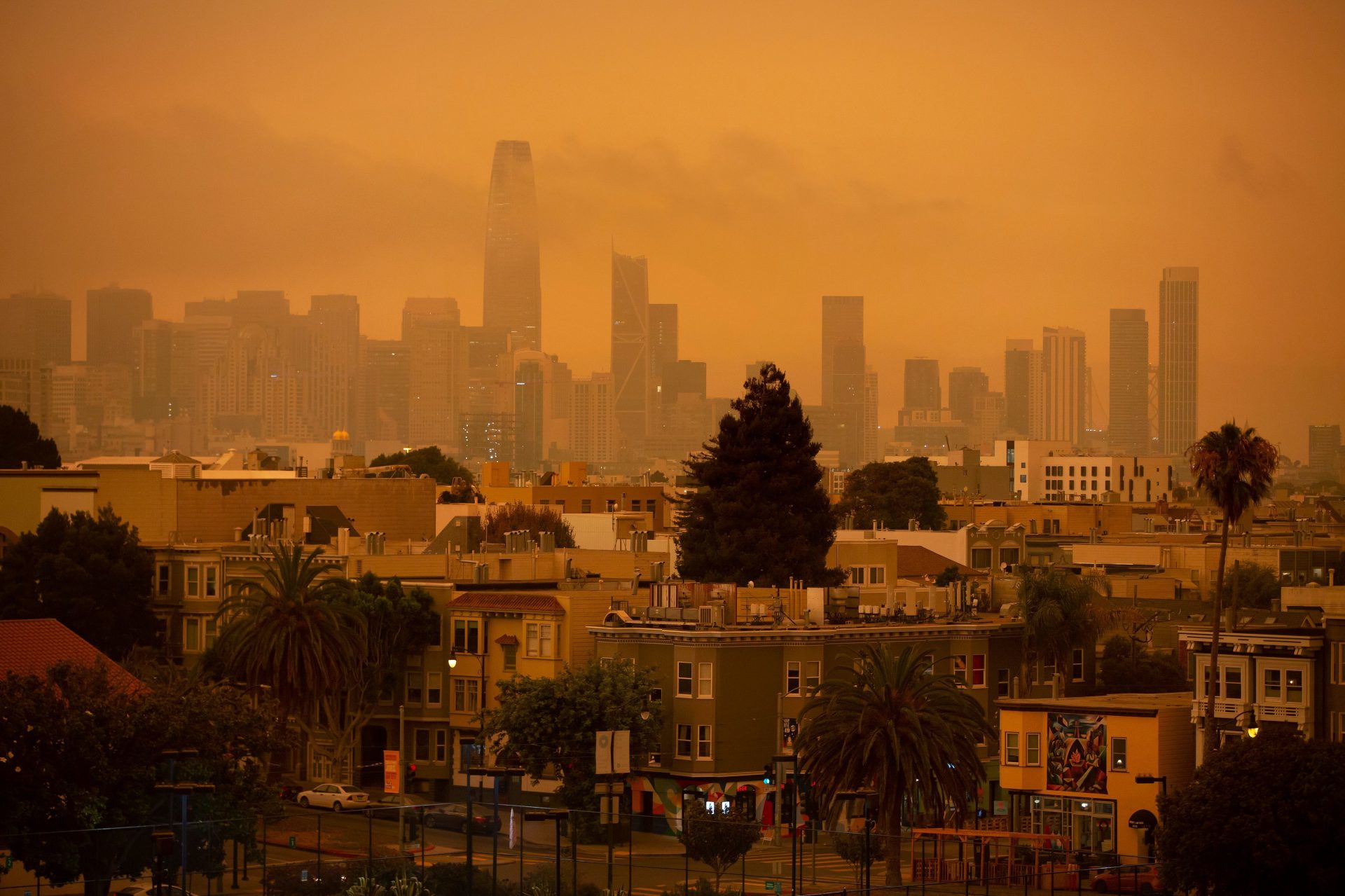 He also said better forest management is the key to preventing the state’s fires. In recent days, he has criticized California officials, but most of the state’s forested land is federal or private.

On the other side of the country, Democratic presidential nominee Joe Biden addressed these disasters and others, and their link to human-caused climate change.

“With every bout with nature’s fury, caused by our own inaction on climate change, more Americans see and feel the devastation in big cities, small towns, on coastlines and farmlands,” Biden said in prepared remarks.

Speaking outdoors on the grounds of the Delaware Museum of Natural History, Biden stressed that climate disasters are affecting blue and red states alike. “It’s not a partisan phenomenon; it’s science,” he said.

Biden called Trump a “climate arsonist” and turned the president’s campaign warnings about at-risk suburbs around: “You know what’s actually threatening our suburbs? Wildfires are burning the suburbs in the West. Floods are wiping out suburban neighborhoods in the Midwest. And hurricanes are imperiling suburban life along our coasts.”

Biden has focused much of his campaign on fighting the battle against climate disasters and has vowed to boost funding for clean energy initiatives and to create domestic jobs in the sector.

This is in stark contrast with Trump, who has dismissed or diluted dozens of federal environmental policies since taking office. A major pitch of his 2016 campaign was to appeal to coal industry workers, vowing to restore the industry.