In this Sept. 7, 2020, file photo Democratic presidential candidate former Vice President Joe Biden speaks during an event with local union members in the backyard of a home in Lancaster.

To door knock or not? Campaigning for Congress in COVID era

(Washington) — Democratic Rep. Madeleine Dean calls herself a “big hugger,” but there’s none of that in-person campaigning in the Philadelphia suburbs as the House freshman runs for reelection largely online to protect against the health risks of COVID-19.

Traveling the heartland, Iowa Republican Sen. Joni Ernst is taking the opposite approach. She just completed an annual 99-county tour of her state, mostly masked, but sometimes not, talking to modest-size groups — and, at one point, gathering close for a photo.

The two lawmakers show the different tactics underway in a pandemic election year unlike any other as candidates try to win over voters beyond the White House in down-ballot races that will determine control of Congress.

President Donald Trump is setting the tone for his party, with big rallies and few masks. Democrats, led by presidential nominee Joe Biden, are keeping events small and mostly virtual, confident that voters will reward them for adhering to public health protocols.

House Speaker Nancy Pelosi, D-Calif., calls the campaign decisions “a matter of life and death.” The GOP leader in the House, Kevin McCarthy of California, a Trump ally, says the president’s party is showing up.

By November, voters will decide who had the right approach — a high-stakes gamble as the coronavirus pandemic rewrites the rules of political campaigning. 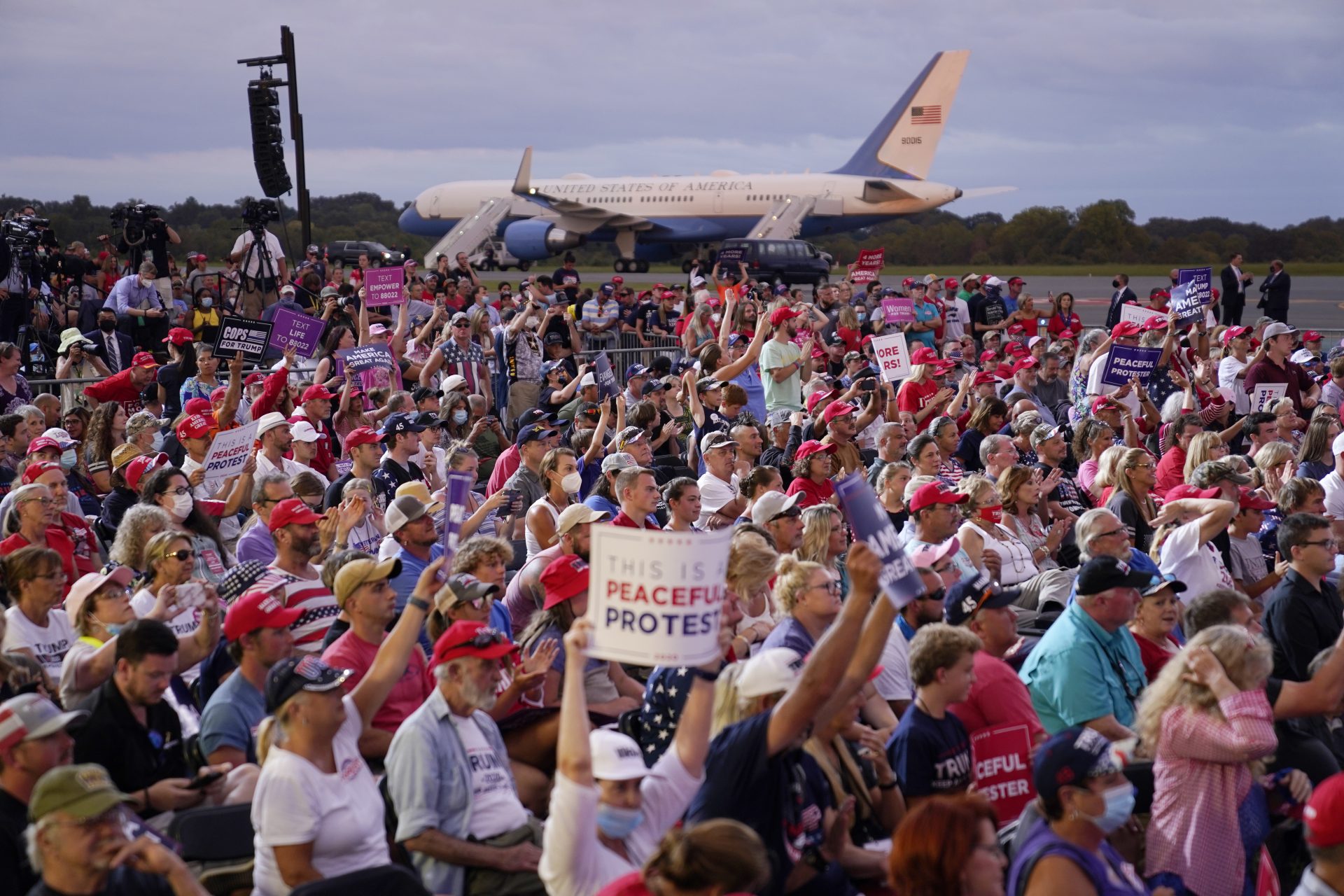 “It’s a different world,” Dean said during a recent Zoom call with reporters.

“I can’t wait for the day when I can go back to knocking on doors and being at train stations to speak to people directly,” she said. “But we’re making the most of it.”

The House and Senate campaigns are courting voters as attitudes shift about COVID-19. In July, an AP-NORC poll showed 85% of Americans said they were staying away from large groups, including 95% of Democrats and 75% of Republicans. By August, about three-quarters of Americans said they were at least somewhat concerned about themselves or a family member being infected, according to the AP-NORC poll.

Public health experts warn that even as the number of cases levels nationwide, Americans’ behavior will determine whether there’s another spike this fall with colder weather and the flu season.

The Democratic Congressional Campaign Committee told lawmakers it’s up to them to set an example.

Campaigns are looked to “as leaders in the community,” said a DCCC memo obtained by The Associated Press, “and their health and safety precautions should reflect that.”

Virtual town halls, phone banks, texting and Zoom-style meet-ups are replacing the traditional campaign events and door-knocking operations, which in years past have been seen as crucial to coax voters to the polls.

One party strategist said Democrats believe voters will appreciate candidates who take COVID-19 risks seriously, attempting to draw a contrast to Trump and Republicans. The strategist and others were granted anonymity to discuss tactics the parties are employing.

In Georgia, Senate candidate Jon Ossoff’s campaign is drawing thousands of people to online forums, more than strategists said could be reached by traditional canvassing. He is running against first-term GOP Sen. David Perdue. 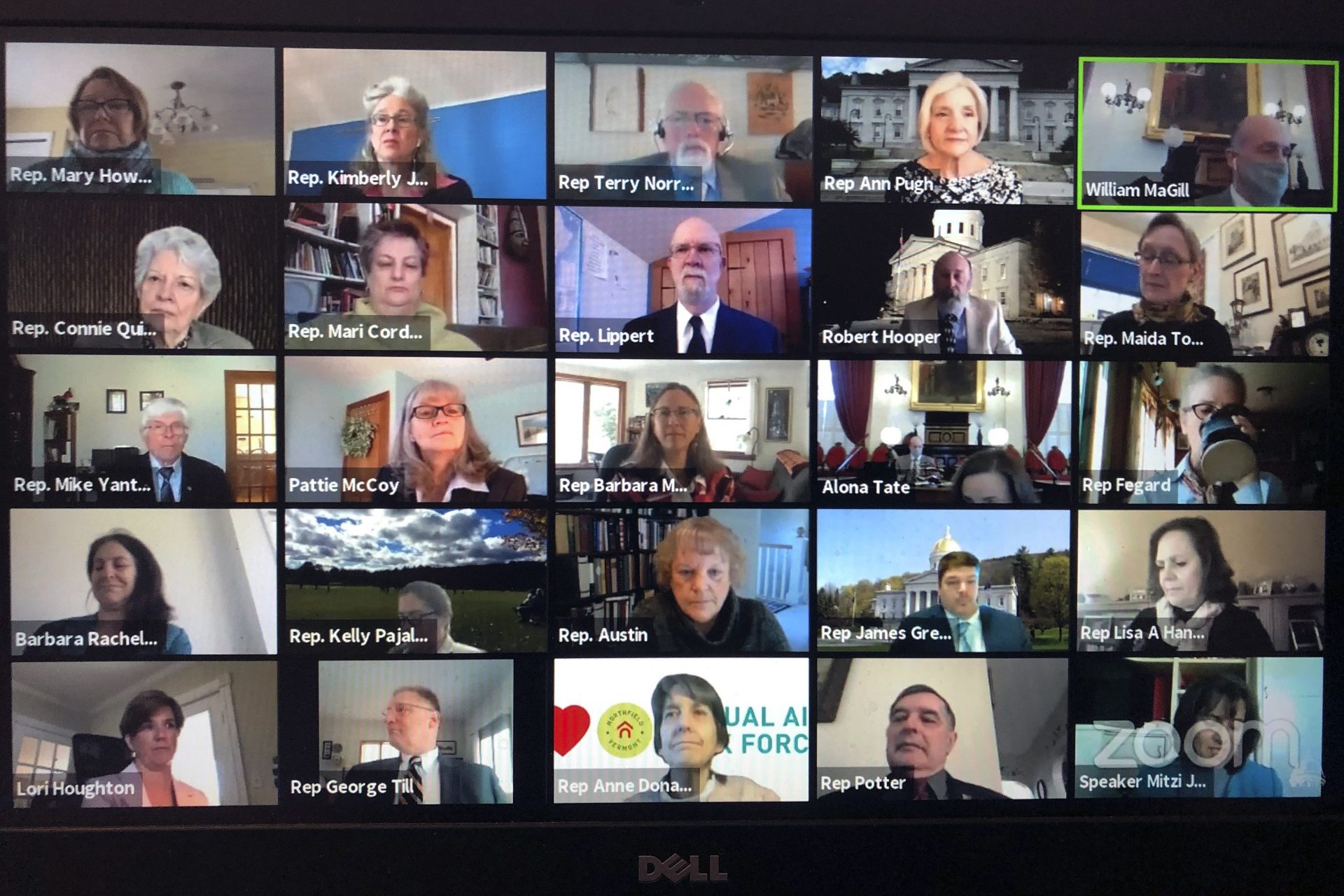 Members of the Vermont House of Representatives convene in a Zoom video conference for its first full parliamentary online session on Thursday, April 23, 2020, in Montpelier, Vt. The first order of business was to ratify a rule change passed in March to allow online meetings developed in response to the coronavirus outbreak.

Republicans are defending a narrow three-seat Senate majority as Democratic candidates gain traction in more than a half-dozen states, including Iowa, Colorado, Maine, North Carolina. That’s twice as many that Democrats would need to flip to tip party control.

“Even in these challenging times, it’s my job to show up and hear directly from all Iowans,” Ernst said in a video message after finishing her all-county tour.

Typically outside groups provide much of the legwork knocking doors to reach voters. This year, they, too, are taking divergent approaches.

The Congressional Leadership Fund announced it’s unleashing $3.5 million to start put boots on the ground — with personal protective gear — in 12 House districts as Republicans stage a longshot fight to wrest control from Pelosi and Democrats. Republicans would need to win some 19 seats.

A Republican strategist said the GOP reckons that with so many Americans home because of the coronavirus crisis there’s a “captive audience” of voters to reach.

Tim Phillips of the Koch-backed Americans for Prosperity Action said his group started testing door knocking on June 1 to see what worked, what didn’t.

Standing 8 to 10 feet away seemed better than 6, he said, and visitors followed local rules about mask wearing — sometimes on, sometimes just in hand.

By July, the group expanded door-knocking nationwide and found people are very willing to open up, he said.

“I can’t tell you how many times now I’ve had people say, ’You’re the first human interaction I’ve had for months now,’” said Phillips, who has knocked doors himself in several states, including North Carolina, where AFP Action is investing $11 million in the Senate race. He said the rate at which people answer the door is up at least 18% compared with pre-pandemic numbers.

Elsewhere, the powerful American Federation of State County and Municipal Employees is launching its “big green machine” — thousands of union workers and retirees — to virtual field offices to help elect Biden and “candidates up and down the ballot,” the union said.

Volunteers can call voters, send texts and take other actions. A union official, granted anonymity to discuss the organizing effort, said they find that people want to “do something.”

Pelosi noted that in some places it may be safe to go door to door.

In Maine, where the number of virus cases has been low, both campaigns are stepping out.

Democratic Senate candidate Sarah Gideon has resumed town-hall “Suppers with Sara” but with a socially distant, outdoor version of the state’s traditional dinners.

Dean, in Philadelphia, acknowledged there’s nothing to replace personal interaction. But she said she’s confident the virtual campaigns will meet the moment of these rocky times.

“The energy is high,” said Dean. “Sadly, it is so laced with anxiety.”

Associated Press writers Sara Burnett in Chicago and Hannah Fingerhut in Washington contributed to this report.