A fisherman walks along the Schuylkill River Trail at Bartram's Gardens.

The theater of walking: Short hikes can change your world

“Follow the perimeter, see what’s out there, look at something different.” - Michael Schill

(Philadelphia) — Michael Schill of West Philadelphia has always been a walker. For 25 years he’s been regularly ambling around the city, most often in two places: the Schuylkill and Wissahickon trails.

“It’s nice to go someplace that you know you enjoy, where you can let your thoughts wander without worrying about where you’re going,” he said. “Just enjoy the physical sensations of walking.”

Schill prefers to walk alone so that he doesn’t have to worry about holding up one end of a conversation. “I’m not the most sociable walking companion,” he said.

Like many people six months into the pandemic, Schill revels in walking when other options for recreation are limited. Urban guided walks are selling out according to the Preservation Alliance for Greater Philadelphia, which offers architectural tours, and Mural Arts Philadelphia, which offers public art tours. Both, however, have reduced the number of people allowed on a given tour to allow for social distancing.

The number of walkers in the more natural environs of the Wissahickon Creek have increased, to the point where Schill avoids that area for the crowds.

It was created by Sean Patrick Cassidy, a MFA theater student at Moravian College in Bethlehem, who hesitates to reveal details about what, exactly, “Rumi/nation” is, other than it has nothing to do with the ancient Persian poet Rumi. He is asking audiences to put on sturdy shoes, put on headphones, and open themselves up to exploration.

“It’s meant to be a mystery,” he said. “Audience members are being asked to take a first step and trust a new theatrical experience.”

The Fringe Festival, which opens this week with more than 100 alternative performance pieces in both digital and physical spaces, features a handful of walking-based options. One of them is “Walk Around Philadelphia” , an annual challenge by photographer J.J. Tiziou to circumnavigate the city’s approximately 100-mile perimeter. He offers maps and tips, breaking up the route into five sections that can each be tackled in a day. People are invited to do as many sections as they wish.

Schill, a museum exhibition technician who was recently laid off from his job at the Please Touch Museum, finds he now has more time for walking. In February, when he still had a job, he did one of 20-mile sections of “Walk Around Philadelphia.” This fall, he plans on doing the whole route.

“The thing that appeals to me – especially in the Northeast where I have never been – it would be fun to try something new,” he said. “Follow the perimeter, see what’s out there, look at something different.”

Demographically speaking, Schill is the kind of person most often found on the more than 300+ miles of recreational trails in the greater Philadelphia area: a 53 year-old, white heterosexual.

“We see, in our outdoor spaces, a fairly homogenous usage,” said Lizzie Hessek of the Pennsylvania Environmental Council. “Not everywhere, but writ large it’s predominantly white folks and the well-off that are using these spaces that we build and say they are for everyone.”

That’s a problem. The PEC would like to see a more diverse range of people frequenting the region’s trails. Hessek hopes one way to entice Black, disabled, and queer people to the trail circuit is tell stories on the trails that might appeal to them.

“To serve as an invitation to people who don’t see themselves represented in those spaces, to say, ‘Your stories live here, too,’” she said.

Hessek partnered with Adrienne Mackey, of the theater company Swim Pony, to develop theatrical audio stories tailored to specific sections of walking trails that can be streamed through your phone as you walk.

Called TrailOff, the streaming stories are triggered by the satellite GPS technology in your phone, so that the story will only progress once when you hit certain locations along the trail. The year-long program is using the Fringe Festival as a launchpad.

One of the stories is “Chronicles of Asylum,” an Afrofuturist science-fiction tale set along Bartram’s Mile, a trail in Southwest Philadelphia along the Schuylkill River leading to Bartram’s Garden. Author Li Sumpter transforms that landscape into a post-apocalyptic refugee colony. 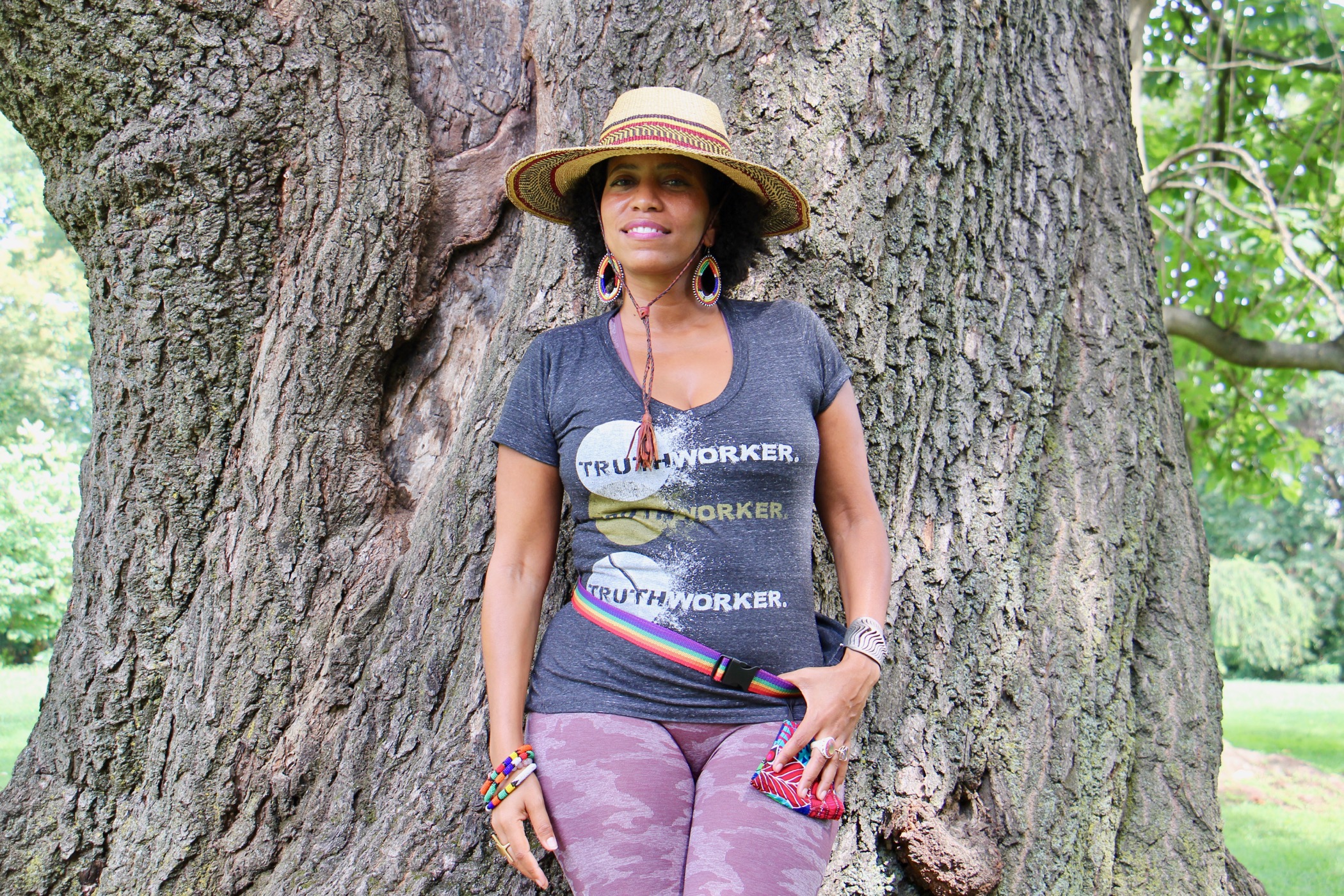 In the future imagined by Sumpter, the Earth is in total environmental collapse and Philadelphia has become an isolated and aggressively policed city-state. Criminals, misfits, and activists fleeing the city would cross the Schuylkill River into what Sumpter called The Hinterlands (what is now West Philadelphia).

“It’s not lawless. It’s actually a very organized place,” she said. “In this colony – which is gated – it is run by this ethos that nature is something to be respected and cared for. The refugees live that way.”

The premise of the story is that people from the city mysteriously disappear into the Hinterlands, never to be heard from again. A journalist at the last remaining pirate radio station – Rogue Radio — travels across the river to find out what’s going on.

Sumpter, aka Dr. Apocalypse (she got her Ph.D. in apocalyptic film studies), said she is inspired by the Afrofuturist science fiction novels of Octavia Butler and the dystopian world of the TV show Walking Dead.

“I used to be a huge fan of the Walking Dead,” said Sumpter. “I mean, I still am – but, like, I’m done with the zombies for now. You know what I mean?”

In reality, Bartam’s Mile is not a refugee colony; it has neither a Star Wars-like cantina filled with miscreants nor a history of disappearing people who may or may not have found a way to leave the Earth to live on another planet.

Rather, the trail is a mixture of urban and rural scenery. The brief stretch has dramatically different parts, from active industrial yards, through abandoned post-industrial wastelands, past lazy boat docks, and into bucolic meadows.

The TrailOff project is not meant to inform you about the history or ecology of its nature trails, but instead offer the sound of imaginative worlds as you walk.

“They are in conversation with the land, but we wanted to be transported to a different universe,” said Adrienne Mackey of Swim Pony. “A lot of authors had to get their brains around that: ‘Oh, I’m not supposed to give you facts. This is not educational. This is for fun.’”

Mackey hired 10 writers to create original works for 10 trails in the TrailOff project. The roster represents the diversity the Pennsylvania Environmental Center would like to see on the trails, including African American, Indigenous, Latino, Muslim, and nonbinary writers.

Some stories are very narrative-driven, like Sumpter’s sci-fi yarn; others are more poetic, like “The Way Sand Wants for Water” by the writer Afaq, an emotional meditation of the landscape of the Cooper River Trail in Camden.

All the stories attempt to transform the landscape — if only in the walker’s mind — into something other than what it appears to be.

The Bartram’s Mile trail starts at the Newkirk Monument, a carved stone obelisk erected 180 years ago on the side of the railroad tracks by the company that built them. The Philadelphia Wilmington and Baltimore Railroad Company wanted to commemorate the successful job done by its executives and engineers who, for better or worse, forever transformed the banks of Schuylkill River, by carving their names into the monument.

“Some named on the monument were immigrants, others the scions of families long-established on American shores,” wrote Bradley Peniston in a 2014 article for Hidden City. “All were white men; most were well-off, if not wealthy.”

In “Chronicles of Asylum,” Sumpter completely ignored the real history of the Newkirk Monument, transforming it into spiritual signpost harkening back to the uses of the obelisk in ancient Egyptian mythology.

Sumpter’s fictional obelisk is not carved with names of rich white men, rather with a kind of oracular message to inform her fictional radio reporter as she begins her journey in the Hinterlands: “All that lives must die. Time is a spiral in space, endless is the soul. Love and gravity will pull you through the darkness if you dare believe.”

“The cosmic plays a big role in my story. African cosmology and Indigenous cosmology play a big role,” said Sumpter. “When I talk about apocalypse I’m talking about patterns of transformation that are cyclical. Exploring themes of birth, death, and rebirth – it’s not just about darkness and death and doom, but about evolution and rebirth and transcendence.”

Flipping the Newkirk Monument from a piece of 19th century industrial history to a signpost of African spiritualism is one way Mackey hopes the entire TrailOff project will trigger the imaginations in a new generation of walkers.

“One of the aims of the project is to say, what if the stories are centered with perspectives that are usually marginalized in environmental programming,” said Mackey. “All of the writers are involved with communities you wouldn’t normally think are nature people. We’re trying to change that.” 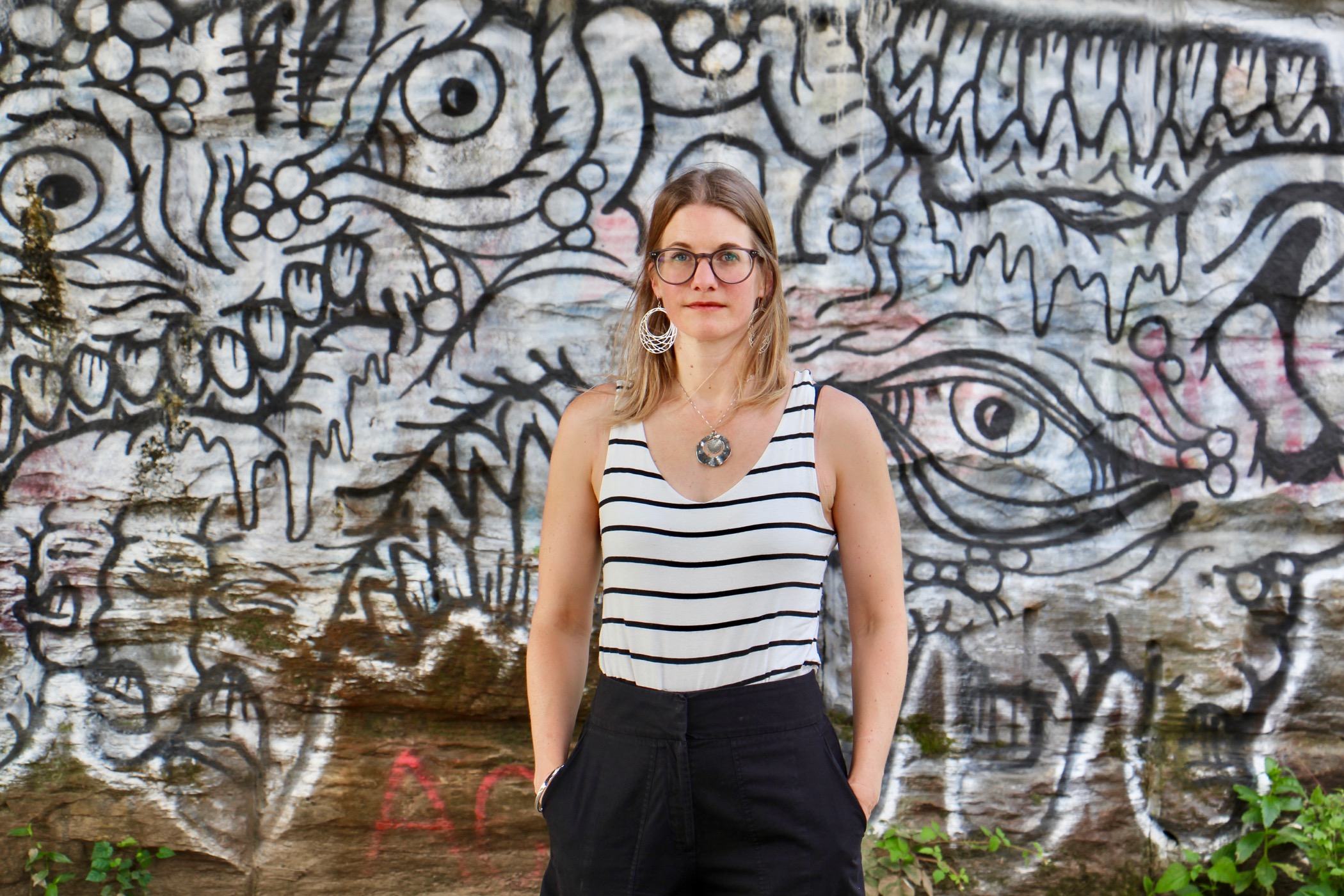