President Donald Trump lays a wreath at a 19th anniversary observance of the Sept. 11 terror attacks, at the Flight 93 National Memorial in Shanksville, Pa., Friday, Sept. 11, 2020.

President Donald Trump and his Democratic rival, Joe Biden marked the 19th anniversary where their differences in style couldn't have been more sharply on display.

President Donald Trump and his Democratic rival, Joe Biden marked the 19th anniversary of the Sept. 11 attacks on Friday at memorial services where their differences in style couldn’t have been more sharply on display.

Trump and Biden were both traveling to rural Shanksville, Somerset County, where the hijacked Flight 93 crashed in a field, killing everyone on board. But the two would not cross paths. While Trump spoke at the site’s morning memorial ceremony, Biden was to visit later in the day, after attending the 9/11 Memorial & Museum’s annual commemoration at Ground Zero in New York, along with Vice President Mike Pence.

In a rare moment of detente during what has become a nasty campaign, Biden approached Pence after arriving at the ceremony and tapped him on the shoulder to say hello. The current and former vice president then shared an elbow bump — the popular COVID-era handshake replacement — as did Biden and second lady Karen Pence.

While a similar meeting between Trump and Biden will not happen, the day will nonetheless bring the two candidates the closest they’ve been in months. And though the country will be focused on the commemorations, the political significance of their visits to Shanksville is hard to ignore: Pennsylvania is a crucial battleground state in the 2020 election. Trump won there by less than 1 percentage point four years ago, and Democrats hope they can return it to their column in less than two months. 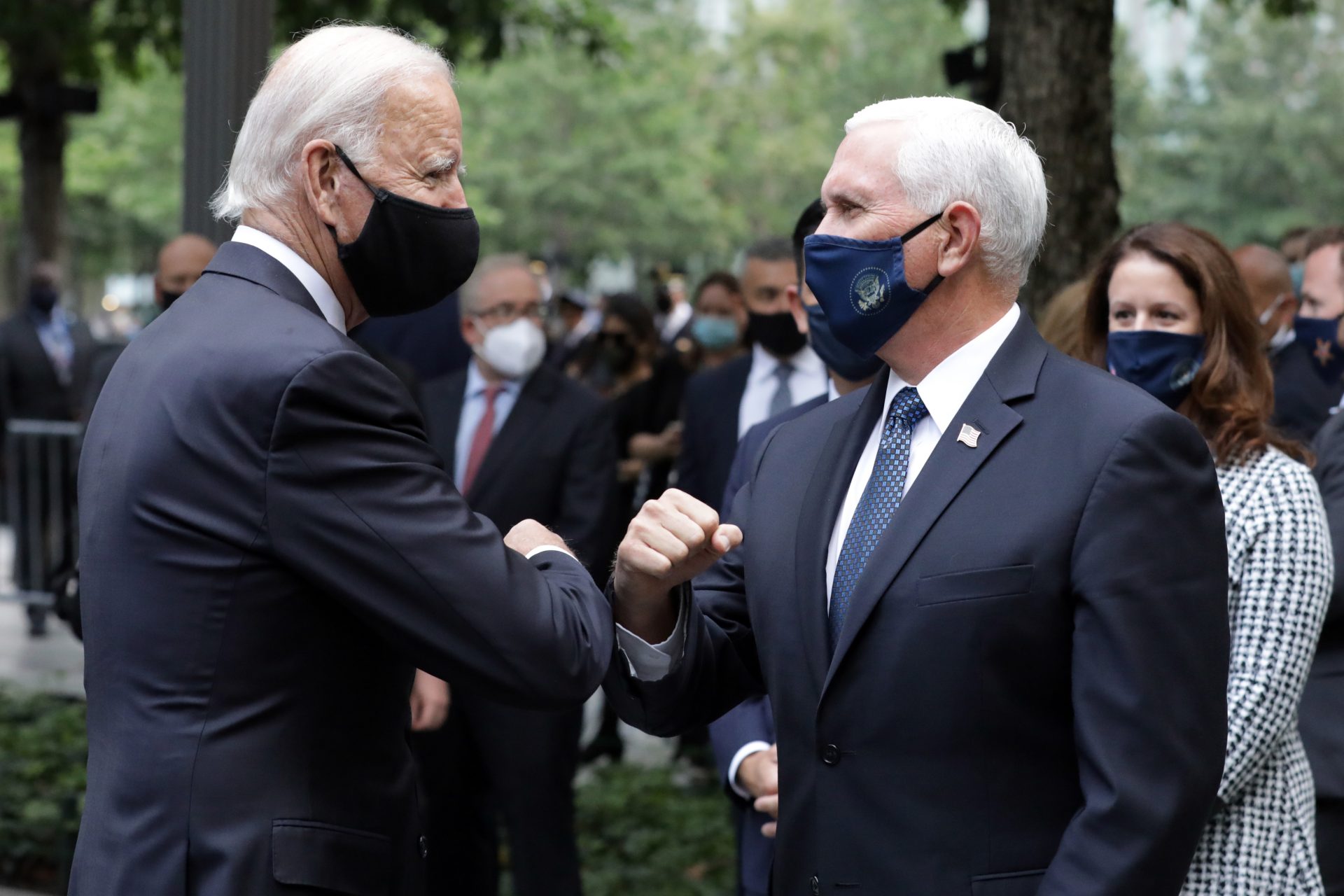 Still, Biden insisted that he would steer clear of politics on a national day of mourning taking place in the midst of another unfolding tragedy, the pandemic.

“I’m not gonna make any news today. I’m not gonna talk about anything other than 9/11,” Biden told reporters. “We took all our advertising down, It’s a solemn day, and that’s how we’re going to keep it, OK?”

Trump delivered a patriotic message in Shanksville as he shared the story of Flight 93, which officials concluded had been headed to Washington, D.C. until passengers teamed up against the hijackers, memorably declaring “let’s roll” as they took them on mid-flight.

“The heroes of Flight 93 are an everlasting reminder that no matter the danger, no matter the threat, no matter the odds, America will always rise up, stand tall, and fight back,” Trump said, telling the families of those killed that “today every heartbeat in American is wedded to yours.”

Trump also noted how the country had come together after 9/11. There was no mention of the current divisions in the country over the coronavirus crisis.

“It was a unity based on love for our families, care for our neighbors, loyalty to our fellow citizens, pride in our great flag, gratitude for our police and first responders, faith in God and a refusal to bend our will to the depraved forces of violence, intimidation, oppression and evil,” Trump declared.

He and first lady Melania Trump also observed a moment of silence aboard Air Force One at 8:46 a.m., marking the time the first plane hit the World Trade Center 19 years ago.

It was a different display in Lower Manhattan at the Ground Zero ceremony, where public officials wee not part of the program. Biden nonetheless consoled family members in the audience. At one point during the ceremony, as Biden was listening to the reading of the names of the victims, he spotted a woman crying in the crowd. Amanda Barreto, 27, of Teaneck, New Jersey, lost her godmother and aunt in the 9/11 attacks.

She said later Biden approached her and “wanted to let me know to keep the faith.” He told her “he knows what it means to lose someone. He wanted me to stay strong. And he’s so sorry for my loss.” She said she was appreciative of his comments and would be voting for him this fall.

Biden also spotted 90-year-old Maria Fisher, who lost her son in the attacks. He told her he had lost his also, a reference to his son’s Beau’s death from cancer. “It never goes away, does it?” he lamented, and handed her a rose. 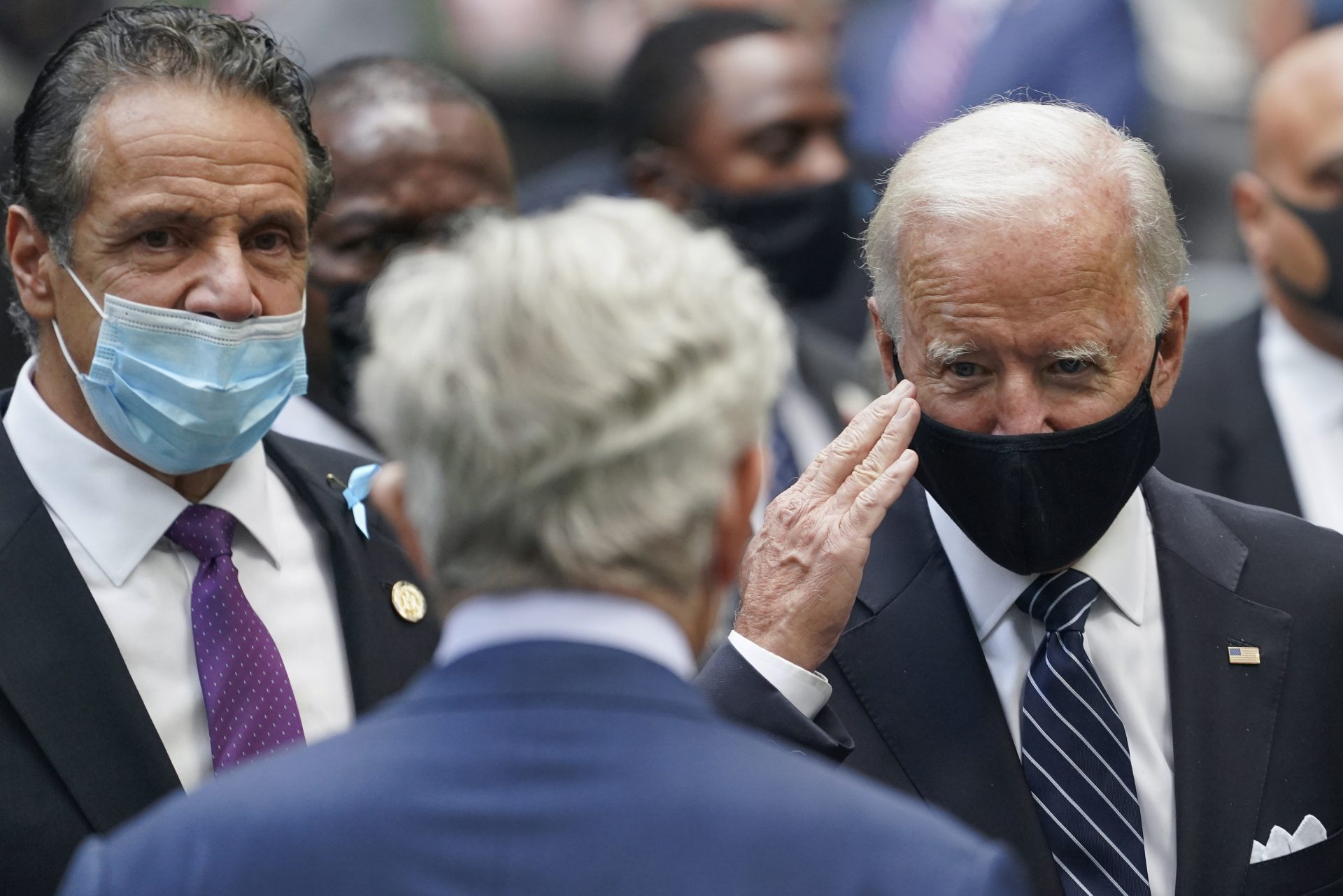 Democratic presidential candidate and former Vice President Joe Biden, salutes a guest alongside New York Gov. Andrew Cuomo, left, at the National September 11 Memorial and Museum, Friday, Sept. 11, 2020, in New York. Americans will commemorate 9/11 with tributes that have been altered by coronavirus precautions and woven into the presidential campaign.

The National Park Service, which co-hosts the annual Flight 93 memorial event, had originally said it was planning an abbreviated ceremony this year to minimize the spread of the coronavirus. The agency had been planning a 20-minute “Moment of Remembrance” without a keynote speaker or musical guests. The name of each passenger and crew member was to be read aloud with the ringing of the “Bells of Remembrance,” according to the agency’s website.

But after Biden and then the White House announced their plans to visit, the website was updated to reflect a new schedule that included remarks from Trump and the secretary of the interior.

In 2016, the 9/11 memorial events became a flashpoint in the presidential campaign after then-Democratic nominee Hillary Clinton abruptly left the Ground Zero ceremony and was seen stumbling as she tried to get into a van. Trump also spent the day in New York and paid his own visit to the memorial in lower Manhattan.

Friday was Trump’s second time observing the anniversary in Shanksville, where he made remarks in 2018. Biden spoke at the memorial’s dedication in 2011, when he was vice president.

The 2,200-acre Flight 93 National Memorial marks the spot in rural Pennsylvania where the hijacked flight crashed, killing all 40 people on board. Three other planes hijacked that day were crashed into the twin towers of the World Trade Center in New York and the Pentagon. Nearly 3,000 people died in the attacks.

Amid flood of news, voters appear locked in on their presidential choices