TOPSHOT - Police officers wearing riot gear push back demonstrators shooting tear gas next to St. John's Episcopal Church outside of the White House, June 1, 2020 in Washington D.C., during a protest over the death of George Floyd. - President Trump visited the church while demonstrators where protesting. With the Trump administration branding instigators of six nights of rioting as domestic terrorists, there were more confrontations between protestors and police and fresh outbreaks of looting. Local US leaders appealed to citizens to give constructive outlet to their rage over the death of an unarmed black man in Minneapolis, while night-time curfews were imposed in cities including Washington, Los Angeles and Houston. (Photo by Jose Luis Magana / AFP) (Photo by JOSE LUIS MAGANA/AFP via Getty Images)

Protesters were supposed to hear warnings before federal police moved in. They didn’t. 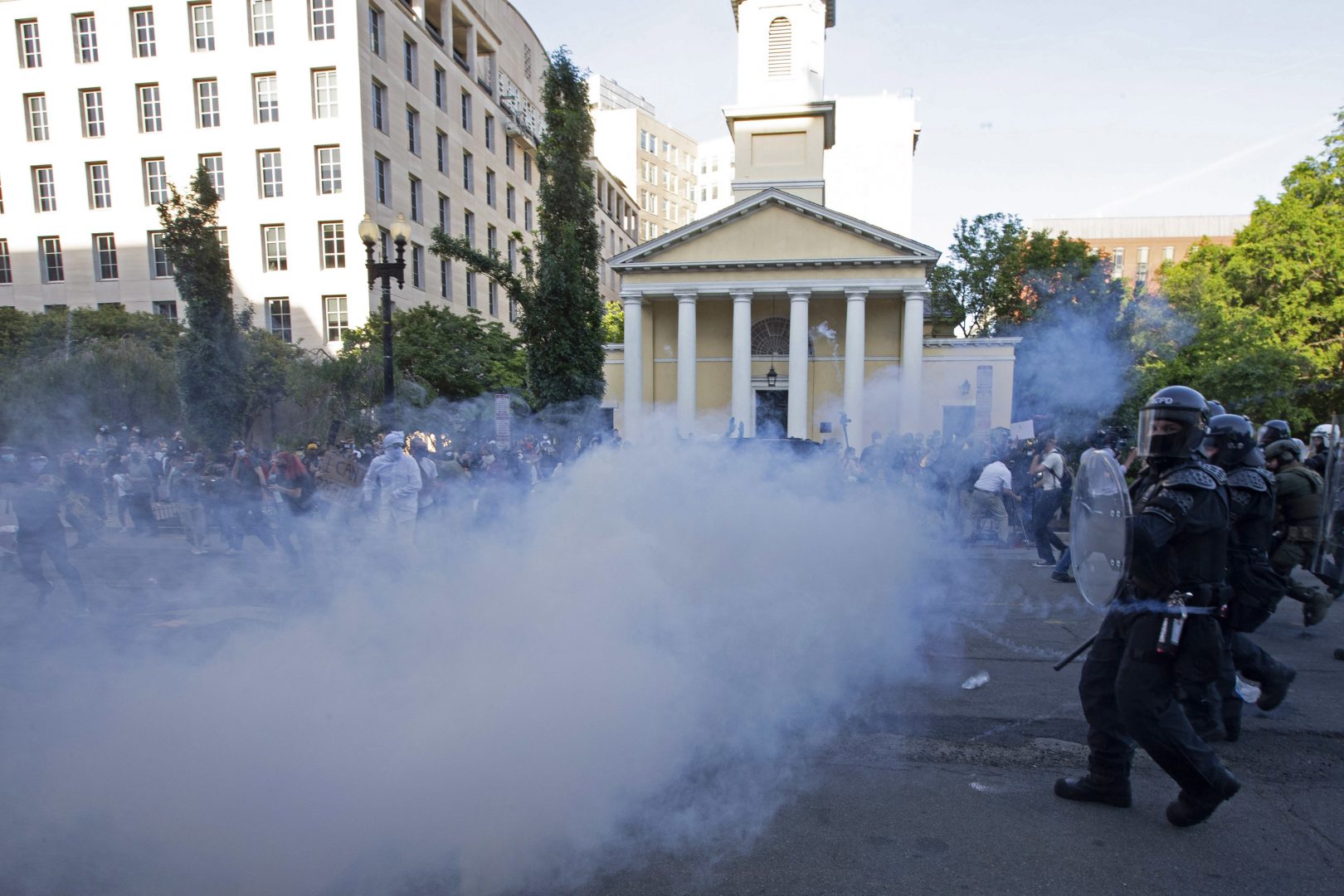 TOPSHOT - Police officers wearing riot gear push back demonstrators shooting tear gas next to St. John's Episcopal Church outside of the White House, June 1, 2020 in Washington D.C., during a protest over the death of George Floyd. - President Trump visited the church while demonstrators where protesting. With the Trump administration branding instigators of six nights of rioting as domestic terrorists, there were more confrontations between protestors and police and fresh outbreaks of looting. Local US leaders appealed to citizens to give constructive outlet to their rage over the death of an unarmed black man in Minneapolis, while night-time curfews were imposed in cities including Washington, Los Angeles and Houston. (Photo by Jose Luis Magana / AFP) (Photo by JOSE LUIS MAGANA/AFP via Getty Images)

(Washington) – Federal Police officers who cleared a crowded park near the White House with smoke and tear gas earlier in June violated court-ordered regulations that spell out how demonstrators are to be warned before aggressive tactics are used against them, attorneys who helped write the agreed-upon rules say.

In particular, the 2015 guidelines require warning large crowds multiple times that they need to disperse, and doing so loudly enough that the orders can be heard for blocks. But a National Guard official who was there that night, and who has become a whistleblower in the case, has told Congress that Park Police used a simple megaphone that few could hear.

Protesters in Lafayette Square near the White House on June 1 said police advanced through the crowd with little warning, firing tear gas and smoke canisters shortly before President Trump appeared outside for a photograph in front of St. John’s Episcopal Church.

“The reason that we wrote this agreement the way that we did was to ensure that there were specific practices that the Park Police had to carry out so that they couldn’t mass arrest people, so they couldn’t suddenly attack a large group of demonstrators,” said constitutional rights attorney Mara Verheyden-Hilliard, who filed a lawsuit that led to the 2015 guidelines. She said her organization, the Partnership for Civil Justice Fund, is preparing litigation against the federal Park and D.C. police for violating constitutional rights.

“They have an obligation to notify that group that they are in violation of the law and to give them the opportunity to comply with a lawful order,” Verheyden-Hilliard said.

Verheyden-Hilliard represented demonstrators, tourists, and passersby who were arrested during a demonstration against the International Monetary Fund and World Bank in Washington, DC., in 2002.

In that earlier episode, police trapped a crowd in Pershing Park, near the White House, and began mass arrests. “People were rounded up, they were put on buses, they were held for 27 hours or more, hogtied in stress and duress positions wrist to ankle,” said Verheyden-Hilliard. “Through this litigation, which was hard-fought litigation, we wanted to ensure that this would never happen again to someone in Washington, D.C.”

Then, 13 years later, U.S. District Judge Emmet G. Sullivan awarded $2.2 million in damages and approved the settlement agreement in 2015. He called it “historic,” and said it could help set the standard for how police departments handle protesters nationwide.

Under that settlement agreement, police who intend to clear an area in Washington, D.C., are required to audibly warn protesters three times that they are violating the law and need to disperse to, in the words of the agreement, “give those who choose not to be arrested time to leave the immediate closed area.”

Each warning is supposed to be two minutes apart and clearly audible. And to ensure demonstrators are actually hearing them, the agreement reads “officers positioned in the rear of the crowd should give a verbal and/or physical indication to the official giving the warnings, confirming that they are audible.”

Evidence suggests that didn’t happen on June 1st. Eyewitnesses, including the senior most National Guardsman at the scene, say those warnings to disperse couldn’t be heard.

Acting Chief of Park Police Gregory Monahan told lawmakers in July that his officers had abided by the rules in the agreement. “The protocol was followed,” he said during sworn testimony before the House Natural Resources Committee. “There were three warnings given and they were given utilizing a Long Range Acoustic device, it’s called an LRAD, that’s what it stands for, that was the device used.”

The LRAD is a kind of sound cannon that emits a piercing noise and then can broadcast a voice or a recording at a deafening level. The idea is to allow people at the back of a crowd to hear instructions.

But recordings made by bystanders June 1, journalists who were there, and from other eyewitnesses, offer no evidence that the sound cannon was used.

“There is zero evidence that there were any officers who can testify that they were in the farthest reaches of the crowd,” said Verheyden-Hilliard. “There has to be documentation that the notice was given multiple times and there are supposed to be recordings made that the notice was given. We wrote all these in specifically for this reason. In fact, unfortunately, it would appear in anticipation of what happened in Lafayette Park.”

A U.S. Park Police spokesman told NPR that Chief Monahan “stands by his testimony to the committee.” The official said because of ongoing litigation the U.S. Park Police couldn’t comment further.

A different version of events

He testified about his experience before the House Committee on Natural Resources on July 28, 2020. “At around 6:20 PM, Park Police issued the first of three warning announcements to the demonstrators, directing them to disperse,” DeMarco told lawmakers. “I did not expect the announcement so early as the DC curfew was not to go into effect until 7 pm that evening.”

DeMarco told the House committee that he was 30 yards away from the officer giving the warnings to disperse and he could barely hear him, and that it was clear to him the protesters couldn’t either. “The announcements were barely audible,” DeMarco testified. “I saw no indications that the demonstrators were cognizant of the warnings to disperse.”

DeMarco is now a military whistleblower recounting what he saw that day and his lawyer, David Laufman, says his client was uniquely positioned to see the events unfold. “From my client’s position, he was 30 yards away from the officer giving the warnings and about 20 yards away from the front line of demonstrators,” Laufman said. “He could both observe and hear the warnings being given and he could observe the reaction of the demonstrators at the same time. He observed a park police officer giving the warnings using a handheld mic attached to an ordinary megaphone sitting on a bench in the middle of the square.”

What happened after those announcements isn’t in dispute.

Officers began to clear the square at 6:30 pm, half an hour before the city-wide curfew went into effect. Horse-mounted park police officers, Civil Disturbance Units, Secret Service, all started to push the crowd back. There were explosions and smoke. DeMarco said they shot tear gas into the crowd. His eyes began to sting and he said he found tear gas canisters lying in the street after it was all over.

The smoke was still in the air when several black sport utility vehicles pulled up to the intersection of 16th Street and H and set up a cordon around St. John’s Church right by the square. The president appeared minutes later.

“The President’s arrival,” DeMarco testified, “was a complete surprise as we had not been briefed that he would enter our sector.”

More groceries, less gas: The pandemic is shaking up the cost of living