This artist rendering of the Durst Organization's plan for Penn's Landing shows mixed-use towers on the waterfront. The proposal was chosen over a competing plan for a new arena for the 76ers.

(Philadelphia) — The Delaware River Waterfront Corporation has selected the Durst Organization to execute a $2.2 billion redevelopment of two prominent parcels along Old City’s riparian shore — effectively ending a competing bid by the Philadelphia 76ers to construct a new arena on the site.

The selection will set in motion an eight-year redevelopment process which will also integrate a new cap over I-95 which will feature a public park. Durst, a $10 billion international real estate firm, proposed replacing two adjoining parking areas with some 3.3 million square feet of new development, including over 2,300 residential units, a 225-bed hotel, over 120,000 square feet of retail, 850 parking spots and thousands of square feet of new public space.

The New York developer also pledged to make a contribution to the city’s Housing Trust Fund or seek on-site affordable housing to take advantage of a zoning bonus that allows additional height in exchange for affordability provisions.

In selecting the Durst organization plan, DRWC board members praised the plan for declining to seek public subsidy, building in environmental resilience features and conforming to the nonprofit’s publicly vetted master plan for the waterfront and integrating the forthcoming I-95 park into their design.

“Their proposal was the most consistent with our master plan,” said DRWC selection committee chair Bill Hankowsky, former chair of Liberty Property Trust.

“We are honored DRWC has selected us for this transformative project that will provide Philadelphians’ extraordinary access to the waterfront,” said Jonathan Durst, President of The Durst Organization. “We look forward to working with community members, elected officials and stakeholders to finalize a design that fulfills the vision of the Master Plan for the Central Delaware.”

The plan promises an economic impact of 28,000 construction jobs, and $2.2 billion in wages over the life of the plan. All four developers emphasized onsite investment. DRWC Finance committee chair Jay Goldstein asserted the Durst plan would include between $770 million and $1.1 billion in impact with “minority or women-based enterprises,” and the company said it would seek a “20% minority-owned equity partner.”

The Penn’s Landing project won’t be the first Durst project on the waterfront. In 2017, the developer shelled out over $21 million for about four acres of piers just to the north between Vine and Callowhill streets. Earlier this year, the DRWC selected the organization’s $10 million bid for an adjacent city-owned lot north of the Benjamin Franklin Bridge, where it plans to build an apartment tower.

The fizzled Penn’s Landing proposals included the 76ers arena plan, helmed by franchise owner Harris Blitzer Sports Entertainment, which had also sought to bring thousands of units of housing, offices, retail space, a school and a new African American history museum on the principal site and neighboring land. The project had sought between $700 and $900 million in incentives, via a publicly-backed financing scheme known as a “neighborhood improvement zone.”

The two most well-known proposals also competed with two other conventional mixed-use developments.

Matt Ruben, a board member at DRWC and the Central Delaware Advocacy Group, which helped develop a master plan for the waterfront, emphasized that the selection process was guided by the city’s decade long failure to redevelop derelict port land along the Delaware River.

“We had seen a litany of failed proposals which had no common theme and were not based on a  consistent plan,” he said. 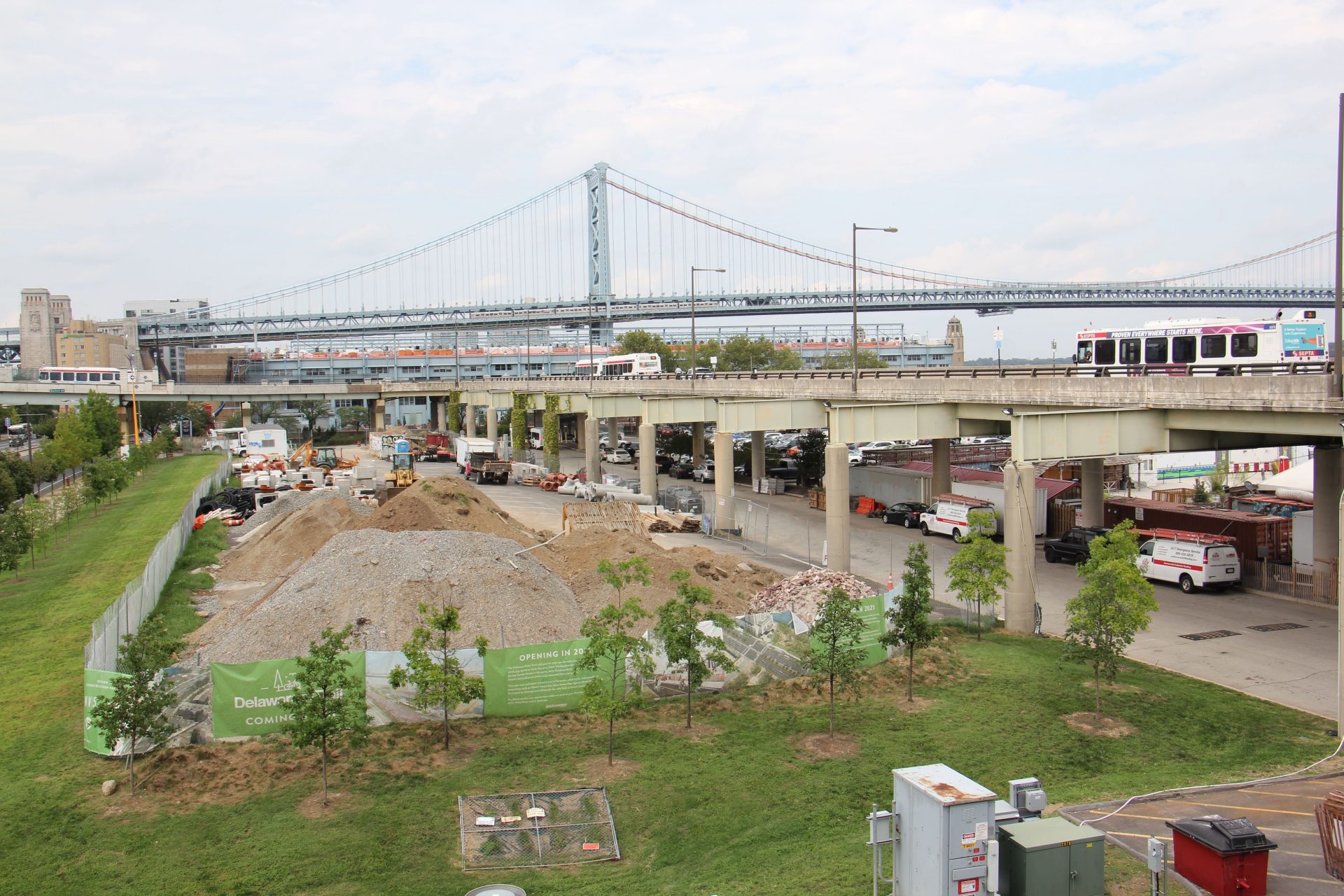 Penn’s Landing at Chestnut Street, looking north on Friday. The area is the site of a proposed new Sixers arena.

The master plan instead envisioned the waterfront as an extension of neighborhoods in Center City, with improved pedestrian access, new streets, public amenities and a mix of development that included residences.

The Durst plan appears to have won points for doing exactly that. A rendering for the larger of the two parcels shows a new street (Known as “Penn’s Landing Road”) between Market and Chestnut Street and includes sprawling new gardens and pedestrian space between four core structures and along the I-95 park cap.

Echoing Hankowsky’s comment, Ruben underlined how the master plan was central to the final selection.

“We have one and only one purpose: to make that plan a reality.”

The DRWC will initiate a community engagement process on the Durst proposal after a formal agreement with the developer is signed, officials said Wednesday.