A customer walks through the Penrose Diner after eating indoors during the coronavirus, Tuesday, Sept. 8, 2020, in Philadelphia.

Restaurants may increase indoor occupancy from 25% to 50% of capacity starting Sept. 21. 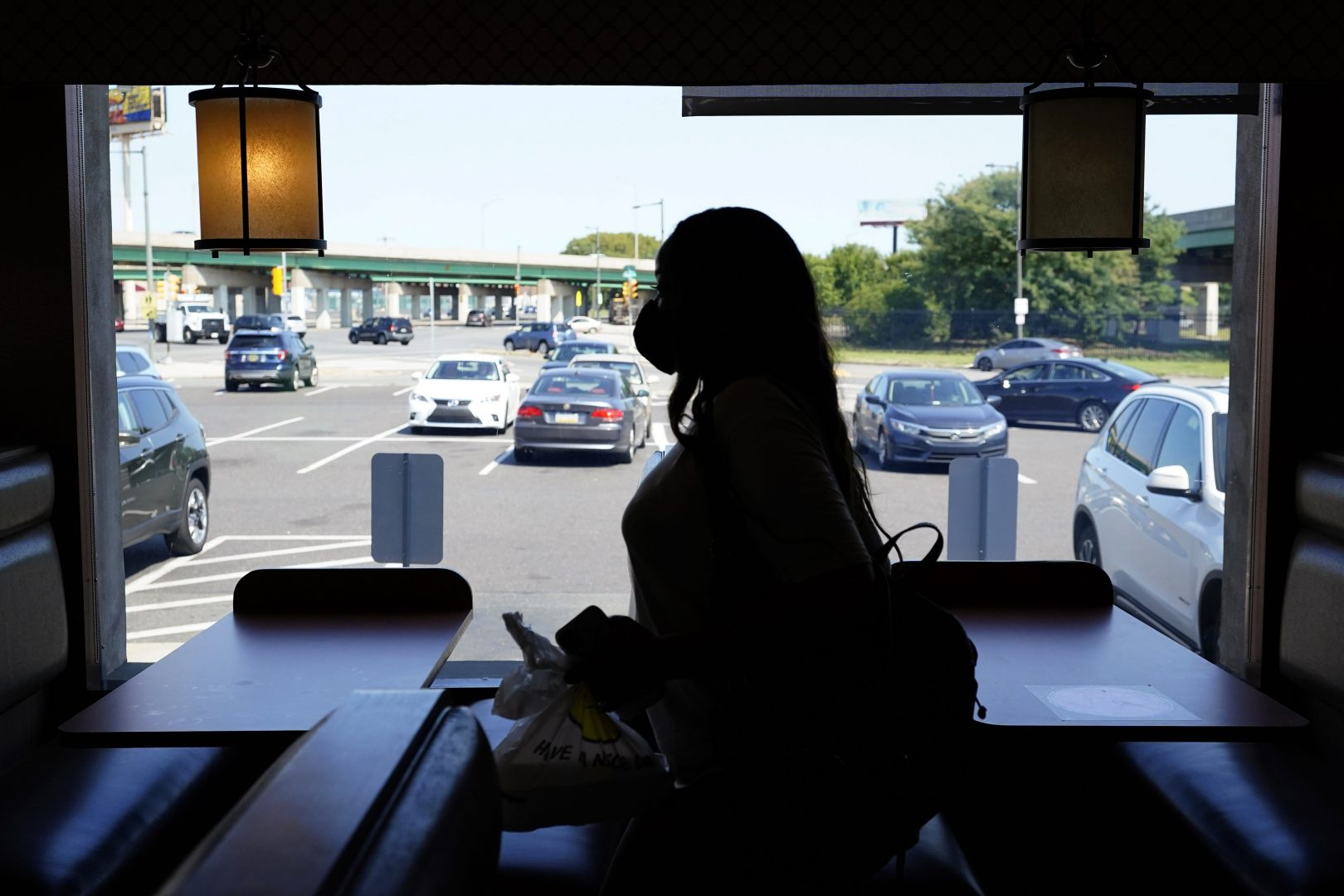 A customer walks through the Penrose Diner after eating indoors during the coronavirus, Tuesday, Sept. 8, 2020, in Philadelphia.

(Philadelphia) — Pennsylvania restaurants will be allowed to seat more patrons inside after Gov. Tom Wolf announced Tuesday he is relaxing restrictions on indoor dining, providing some relief to an industry that’s been hit hard by the coronavirus crisis.

Restaurants may increase indoor occupancy from 25% to 50% of capacity starting Sept. 21, more than two months after the Wolf administration, citing rising infection rates in some virus hot spots, imposed a new round of restrictions on the state’s beleaguered hospitality industry.

“The move to 25% … was an attempt to flatten the curve in Pennsylvania. We were starting to see a troubling rise,” Wolf said at a news conference in Lancaster. “Now I think we’re at a point where we are ready to lift that, partially.”

Bar and restaurant owners have said they were unfairly blamed for rising virus case numbers, challenging the Wolf administration to provide evidence. At a recent House hearing, industry officials warned that thousands of establishments were in danger of closing permanently without relief from the state.

Establishments that want to increase capacity must certify to the state that they are complying with all public health guidelines. Those restaurants will then appear in a searchable state database called “Open & Certified Pennsylvania,” the administration said. 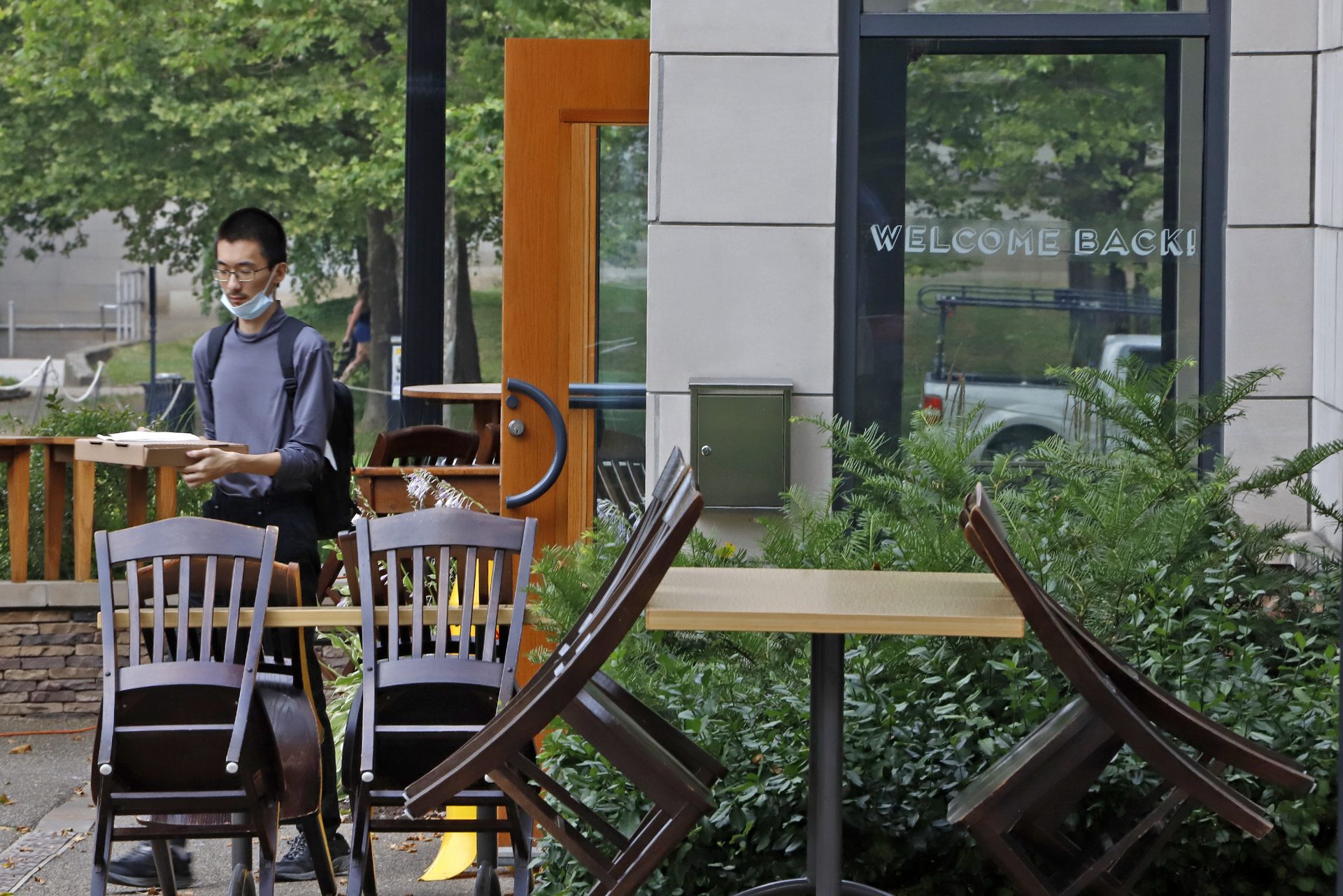 A man walks out of the Porch restaurant with his takeout order on Thursday, July 9, 2020 in the Oakland neighborhood of Pittsburgh. Due to a spike in COVID-19 infections, service at restaurants has been limited to takeout for the past week. Beginning Friday, restaurants will re-open for outside dining only.

Other restrictions on the hospitality industry will still apply. Restaurants must stop selling alcohol at 10 p.m., and bars that don’t offer meal service will remain shut down.

“I think we’re in a position to recognize the hardship that this has caused the restaurants and at the same time continue to do what we can do to keep people safe,” Wolf, a Democrat, said Tuesday.

Republican leaders in the House said bars and restaurants suffered a “lost summer” because of Wolf’s capacity restrictions.

“The governor’s announcement today is a step in the right direction, but opening restaurants to 50 percent is merely a break-even point for many of these small businesses and the order puts a number of restrictions on these establishments’ ability to do business,” House GOP spokesperson Jason Gottesman said in an email.

“While we are happy the governor is trying to address this, it needs to go further in order for it to have a real impact,” he said.

“We don’t want people to congregate while they’re drinking,” she said.

Philadelphia lifted its own ban on indoor dining Tuesday, permitting restaurants to seat patrons inside for the first time in nearly six months.

The reopening came with several restrictions, including a 25% capacity seating limit and a prohibition on parties larger than four people — making it unclear if all the city’s restaurants would unlock their doors.

Movie theaters and performing arts spaces in Philadelphia also got the green light to reopen, albeit with restrictions, and criminal trials in the the city were expected to restart as potential jurors reported for screening.

Immigrant advocacy group CASA demonstrated on the steps of the Capitol building in Harrisburg on Aug. 26, 2020.

In other coronavirus developments in Pennsylvania on Tuesday:

Another call for eviction relief

Wolf again called on state lawmakers to pass an eviction moratorium, as well as make changes to a statewide rent and mortgage relief program, citing a looming “eviction cliff” that threatens thousands of renters during the pandemic.

Wolf’s statewide moratorium on evictions and foreclosures lapsed at the end of August. He has said he doesn’t have the legal authority to extend it, though his administration’s rationale has raised questions about what exactly prevents him from doing so.

Wolf acknowledged Tuesday that the Trump administration subsequently imposed a national moratorium on evictions meant to shield renters who are suffering financial hardship because of the pandemic, but said it doesn’t go far enough, nor do anything for landlords who are bearing a financial cost.

“I am continuing to ask the General Assembly of Pennsylvania to act, because so many people in our commonwealth are facing an eviction cliff,” said Wolf, citing a census estimate that about 400,000 Pennsylvania households were unable to afford July rent.

Pennsylvania is using $175 million of its federal coronavirus relief money to provide rental assistance to eligible tenants and mortgage relief to homeowners, but Wolf said the program has not been working as intended. The Pennsylvania Housing Finance Agency, which administers the program, said only 1,756 tenants were approved for $3.3 million in rent relief in August.

Landlords have been reluctant to participate in the state program, Wolf said, because of a $750-per-month cap on payments. Wolf wants lawmakers to raise the cap and change the program’s cumbersome application process to encourage participation.

The GOP’s priority is to “get our economy moving again and end the stagnation from Gov. Wolf’s unilateral and overbroad shutdown,” said Gottesman, the House GOP spokesperson. “The best form of economic recovery is a steady job, not more government programs.”

The House returns to session next week.