This Labor Day, unions face new pressures and possibilities due to COVID-19

Unions have been thrust into the center of the fray, gaining new followers and visibility while dealing with their own financial turmoil and shifting public health directives. 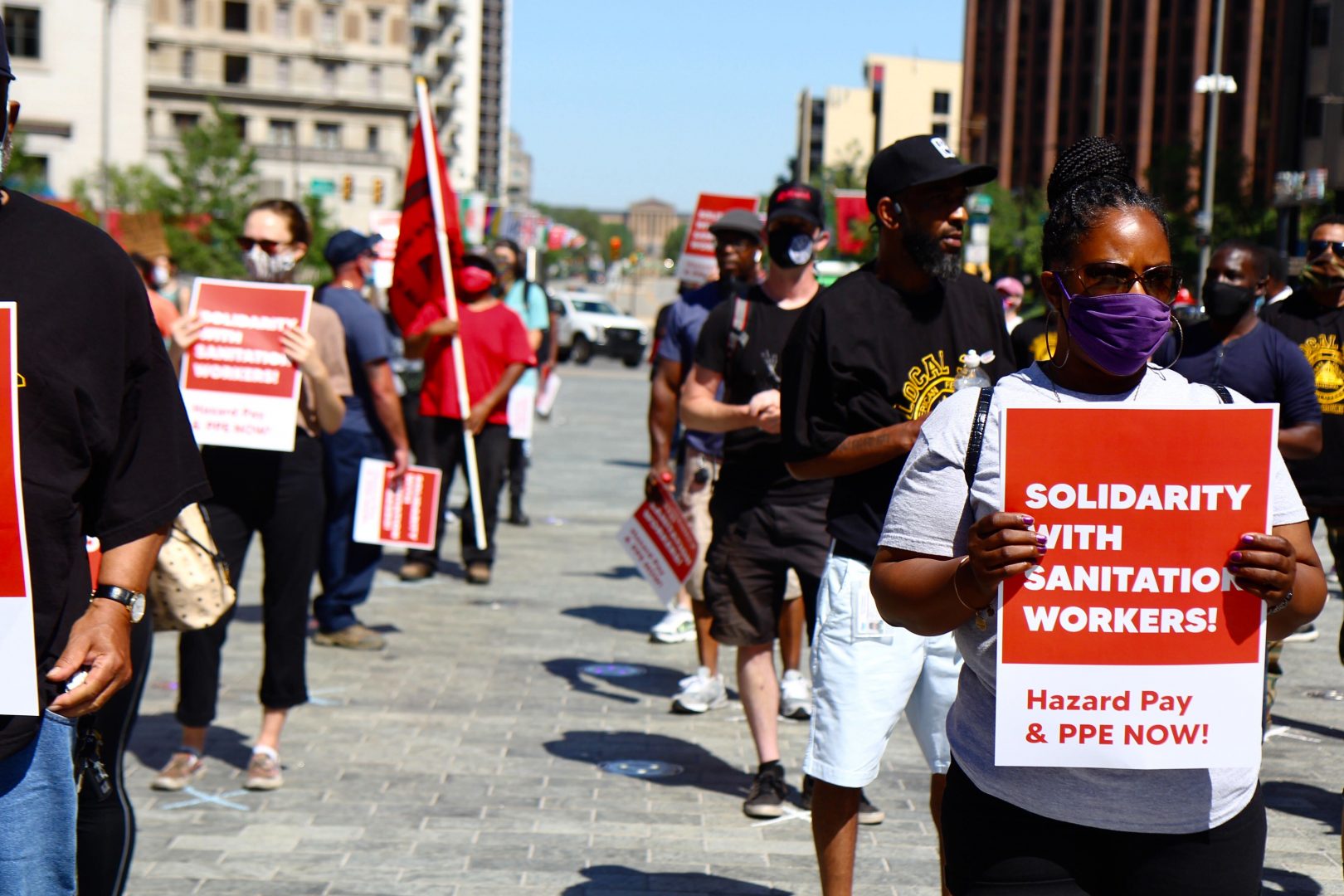 (Philadelphia) — Like everything else in 2020, Labor Day has a different resonance this year.

The coronavirus pandemic has sharpened conversations around workplace safety and workers’ rights, while also casting thousands of Pennsylvanians into financial precarity.

Unions have been thrust into the center of the fray, gaining new followers and visibility while dealing with their own financial turmoil and shifting public health directives.

On one hand, many organized labor groups report an increased interest in unionizing.

“We’re hearing from non-union firms because they don’t really have anyone advocating for them,” said Wendell Young, president of UFCW Local 1776, which represents 35,000 Pennsylvania workers at grocery stores, meatpacking plants and pharmacies.

Such worksites were early hot spots for transmitting coronavirus, as they continued to operate even as nearly all other workplaces were shut down. More than 900 of the local’s members have been infected since the start of the pandemic, and seven have died as of last week, according to Young. He credits the union’s efforts of working with management, for example, to coordinate the shutdown of several meat-processing facilities around the state, with helping to slow the spread of the virus.

Earlier in the year, UFCW also teamed up with grocery store chains to advocate for grocery store workers to be given priority for COVIF-19 testing.

As students return to school, the coronavirus frontlines are extending into the classroom and bringing more collective action with them.

“We’ve gotten a lot of requests [to organize], more than in a typical year,” said Arthur Steinberg, Pennsylvania president of the American Federation of Teachers. His union represents K-12 and higher education staff, as well as other professional workers, such as those in health care. The coronavirus has been both “a trial to help navigate through the pandemic and advocate for the workers and the kids we teach, and it’s been a boost because we have seen people become aware of the importance of unions,” he said.

Teacher unions have been visible in Philadelphia and elsewhere, surveying members and promoting the results of such surveys as guides for how schools should navigate reopening.

New members give unions more political and economic power, but there’s no guarantee that workers reaching out now will actually follow through with a union drive, a process that can take several months.

Accelerated organizing has coincided with financial and health crises in the past, said Patricia Campos-Medina, extension faculty with the Worker Institute at Cornell University’s School of Industrial and Labor Relations. During and after the flu pandemic of 1918, unions, from the police to shipyards to actors, went on strike. The Great Depression, which initially weakened unions, also led to new organizing campaigns and New Deal policies which would strengthen them, including the passage of the National Labor Relations Act.

Now, she said, workers are focused on several fronts at once: winning safety measures at work, demanding racial justice as the pandemic disproportionately affects Black and brown laborers, and demanding better policy from local officials to make up for a lack of federal leadership.

“There is an inflection point in which workers themselves are demanding elected officials to step in at the local and state level to protect them from the failure of the federal government,” she said.

In Philadelphia, that has meant a citywide ordinance protecting worker’s rights to report COVID-safety violations without retaliation. To date, the Mayor’s Office of Labor has received 11 such complaints but has not yet imposed any penalties, according to Outreach and Communications Director Candace Chewning. At the state level, it has meant using federal CARES Act funding to provide hazard pay for some frontline workers.

There’s also been an outpouring of support for essential workers, both unionized and not, summed up in the appreciation campaigns for sanitation workers, who have had to shoulder increased demand for residential trash collection during the pandemic.

Another example is the recognition that fulfillment center workers, the invisible pickers and packers who make online shopping possible, are “essential.” Workers from Instacart and Amazon walked out early in the pandemic.

‘A real threat’
At the same time that the coronavirus pushes unions, the economic recession it triggers threatens the financial health of employers as well as employees and unions, particularly in industries that were the hardest hit such as hospitality, tourism and entertainment.

“At the low point, we were maybe 95% or more laid off,” said Dermot Delude-Dix, a research analyst with Unite Here Local 274, a union that represents workers at hotels and stadiums, among other sites. Six months after businesses shut down en masse, a “few hundred” of the local’s 4,000 workers are currently employed.

“It’s hard to imagine being more affected by the pandemic,” he said.

Travel and hospitality trade groups predict a long, slow slog to recovery with hotels hitting only 50% of their previous revenues by 2021, and air travel lagging until 2024. Those delays mean many workers won’t be returning to their old jobs any time soon, whether they’re unionized or not.

“Membership decline is a real threat” to unions, said Campos-Medina, as the loss of dues threatens their financial footing.

Steinberg said his union, AFT PA, is still financially sound, but has seen a drop in members from higher education, particularly adjunct professors.

Young too echoed this concern, and added another one: infection rates that had been on the decline have now reversed and are climbing again. As businesses reopen, some of the more cautious behavior and practices instilled in the earlier days of the pandemic are falling away.