An at-times tense debate was the latest in what’s become a war between the executive and the GOP-controlled legislative branch over the state’s coronavirus response.

An hour-long debate culminated in an unsuccessful vote to override the governor’s veto of a resolution that would force him to end the state’s disaster declaration.

The hour-long debate culminated in an unsuccessful vote to override Wolf’s veto of a resolution that would force him to end the order, which the governor renewed earlier this week.

While Republicans argued that the state’s case count and hospitalization rate have fallen to a level that should allow businesses including bars and restaurants to open at full capacity, the Wolf administration has repeatedly said ending the declaration would not lift those restrictions.

Democrats also argued the threat of the coronavirus is still imminent, and new cases and outbreaks are being reported daily. On Wednesday, the Department of Health reported an additional 816 additional cases of COVID-19.

Nine Democrats voted with all Republicans in favor of overriding the veto. But supporters failed to meet the higher bar needed to succeed — two-thirds of members, or 136 votes.

Driven by complaints of a lack of transparency and cooperation, Republicans and a handful of Democrats passed the original resolution in June. GOP leadership claimed the measure did not require Wolf’s approval, a dispute that ended up in the state Supreme Court. The justices ultimately sided with the governor.

Wednesday’s failed vote doesn’t necessarily mean the end for the resolution, though, as House leadership is allowed to call multiple override do-overs. 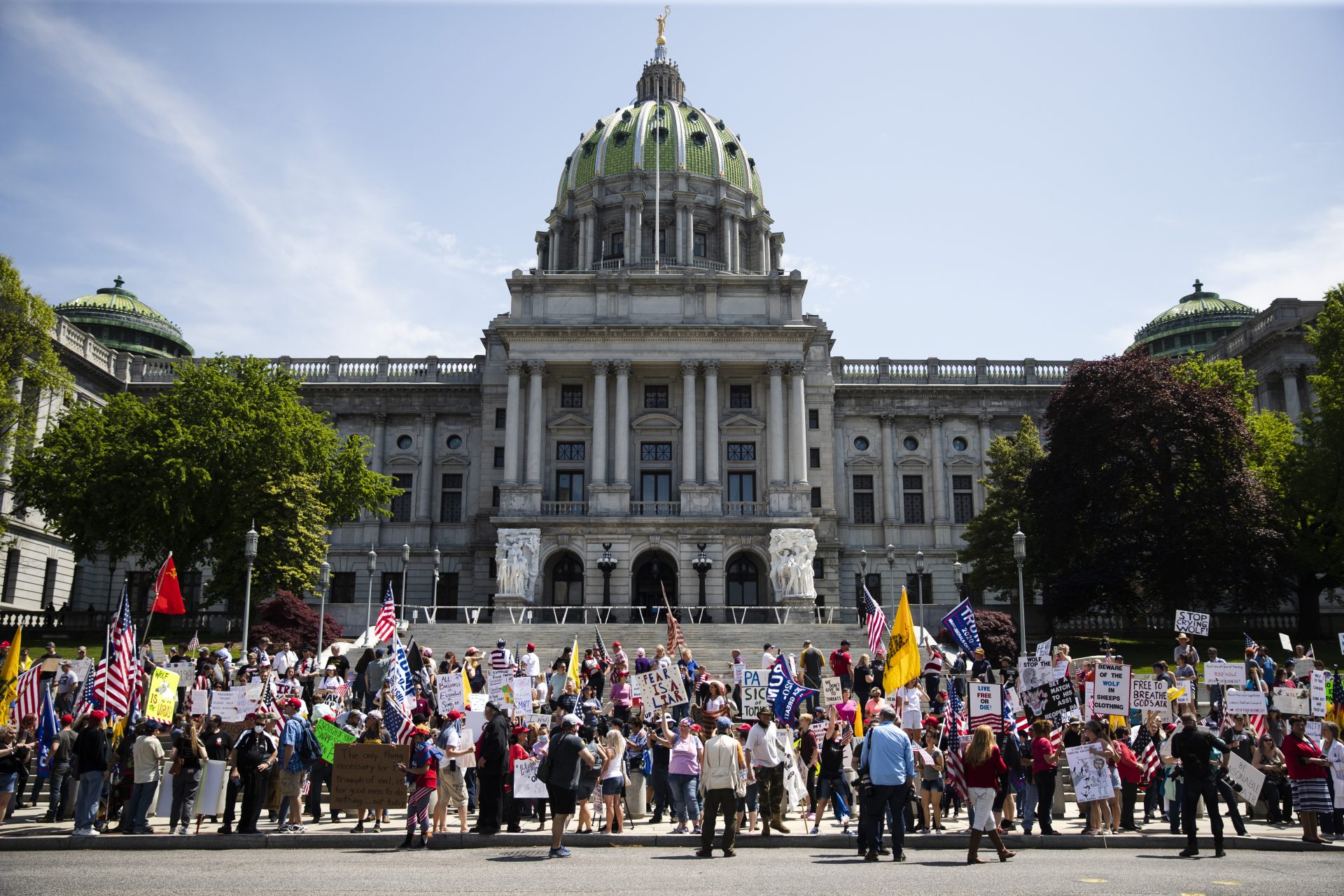 Protesters demonstrate during a rally against Pennsylvania’s coronavirus stay-at-home order at the state Capitol in Harrisburg, Pa., Friday, May 15, 2020. (AP Photo/Matt Rourke)

“We’re not currently scheduled to be in tomorrow, Rep. Neilson,” Cutler replied, “but if we go much longer we might be.”

The at-times tense debate was the latest in what’s become a war between the executive and the GOP-controlled legislative branch over the state’s coronavirus response.

Wolf first issued the disaster declaration in March, greatly expanding his powers to mobilize state agencies and suspend regulations. He renewed the order for a second time this week, saying in a statement it “will provide us with resources and support needed” to continue combatting the “the health and economic effects” of the virus.

Perhaps the most contentious aspect of the administration’s pandemic response was the temporary closure of businesses statewide to slow the spread of the virus and keep hospitals from becoming overwhelmed.

While the most severe restrictions have since been lifted, officials have limited the capacity of certain businesses, like restaurants, bars, salons, and entertainment venues, because they say new coronavirus cases have been linked to such places. Meanwhile, GOP lawmakers have cast doubt on the scope of the problem and decried the ongoing economic harm.

Wolf’s administration has said ending the disaster order would not return the state to business as usual. Instead, mitigation orders issued by Health Secretary Rachel Levine — which cite the Disease Prevention and Control Law of 1955 — would remain in place.

“Despite the Republicans’ assertions, COVID-19 still exists, and we need to remain vigilant,” Nate Wardle, a spokesperson for the Department of Health, said. “The Republican legislature continues to pretend that we are not in the middle of a public health crisis. They need to start taking this seriously and help people who need it most, not take votes for political theatre.”

House Majority Leader Kerry Benninghoff (R., Centre) said Republicans have tried to work with the Wolf administration throughout the pandemic but “feel a lot of these efforts have been ignored.” He said Wolf is “behaving like he’s been given a blank check of authority” and has issued confusing and inconsistent guidance and mandates.

Trump, Biden will both mark September 11th anniversary at the Flight 93 National Memorial