People attend the March on Washington, on Friday at the Lincoln Memorial in Washington, D.C., on the 57th anniversary of the Rev. Martin Luther King Jr.'s "I Have A Dream" speech.

(Washington) — Thousands of demonstrators braved sweltering temperatures in the nation’s capital on Friday to demand an overhaul of the country’s criminal justice system and push for racial equality.

The event, called the Commitment March was held at the Lincoln Memorial, the same site Rev. Martin Luther King, Jr. called for those same reforms decades ago in his iconic “I Have A Dream” speech.

Like the 1963 March on Washington, organizers opened with a series of speeches before attendees began to march through the streets of the city, this time ending at the Martin Luther King Jr. Memorial.

This event – dubbed “Get Your Knee Off Our Necks” — comes at a particularly tense time as frustration over police brutality and use of force have sparked national outrage following the Memorial Day killing of George Floyd by police in Minneapolis.

‘We still struggle for justice’

A common theme throughout the march was a call to action for attendees to register and to vote in the fall elections.

Several of the speakers led the crowds in chants of “No Justice! No Peace!” And repeated the refrain that “Black Lives Matter.” At one point some in the crowd could be overheard saying “hands up, don’t shoot.”

Addressing the crowd from the steps of the Lincoln Memorial, just as his father did on this day 57 years ago, Martin Luther King III said the civil rights struggle his father helped lead in the 1950s and 1960s is far from over. 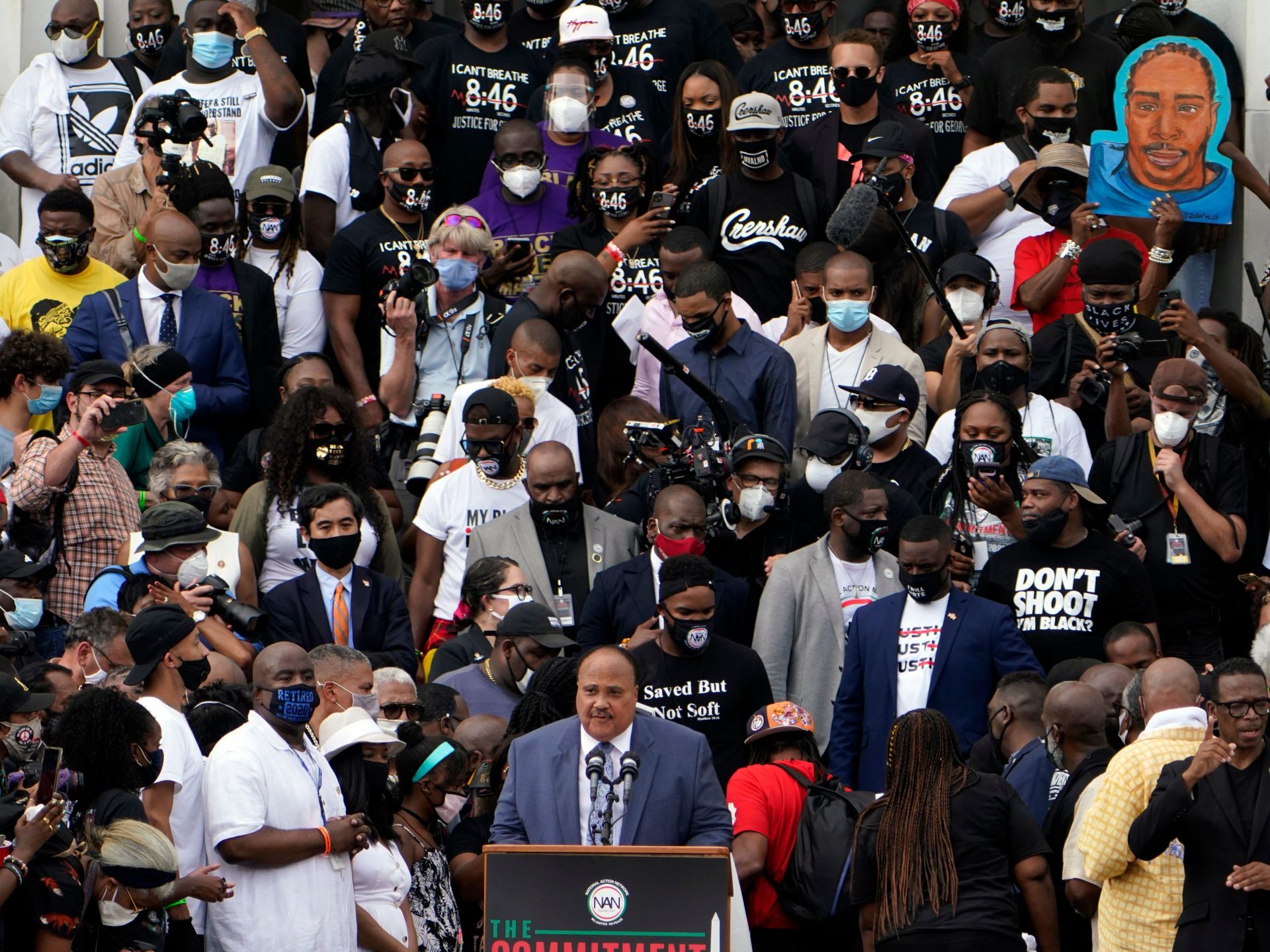 Human Rights Advocate Martin Luther King III, center at bottom, speaks at the Lincoln Memorial during the “Commitment March: Get Your Knee Off Our Necks” in Washington, D.C.

He also touched on the killing of Emmett Till, the Black teenager who was killed on this day in 1955 for allegedly whistling at a white woman in Mississippi.

“Sixty-five years later we still struggle for justice, demilitarizing the police, dismantling mass incarceration and declaring and determining indeterminately as we can that Black lives matter.”

King also encouraged the crowd to become the change they want and not wait on another icon, like his father, to help champion present-day challenges.

“If you’re looking for a savior, get up and find the mirror,” King said. “We must become the heroes of the history we’re making.”

Rev. Al Sharpton, whose National Action Network hosted the event, said he talked with King III about the idea for the march at Floyd’s funeral in June. Sharpton gave the eulogy at that service.

He, like so many others on this day, called on Washington lawmakers to take up legislation of the George Floyd Justice in Policing Act, which was passed by the Democratic-controlled House and is awaiting a vote in the Republican-led Senate.

“We didn’t just come today to have a show,” Sharpton said. “Demonstration without legislation will not lead to change.”

In a nod to the August temperatures that hovered around 90 degrees for most of the afternoon, Sharpton suggested that if demonstrators can endure this discomfort, then they can endure the potential of long lines at the polls in November.

“We didn’t come out and stand in this heat because we didn’t have nothing to do,” Sharpton added. “We come to let you know, if we will come out by these numbers in the heat … that we will stand in the polls all day long.”

Sharpton also called for Majority Leader Mitch McConnell, R-Ky., to take up a bill introduced by Senate Democrats named after the late Rep. John Lewis that would fully restore the landmark Voting Rights Act of 1965.

The Supreme Court struck down part of the law in 2013 that used a formula to determine which states needed federal election oversight.

Lewis, a civil rights icon, died in last month at age 80. He was the last surviving speaker from the 1963 March on Washington. 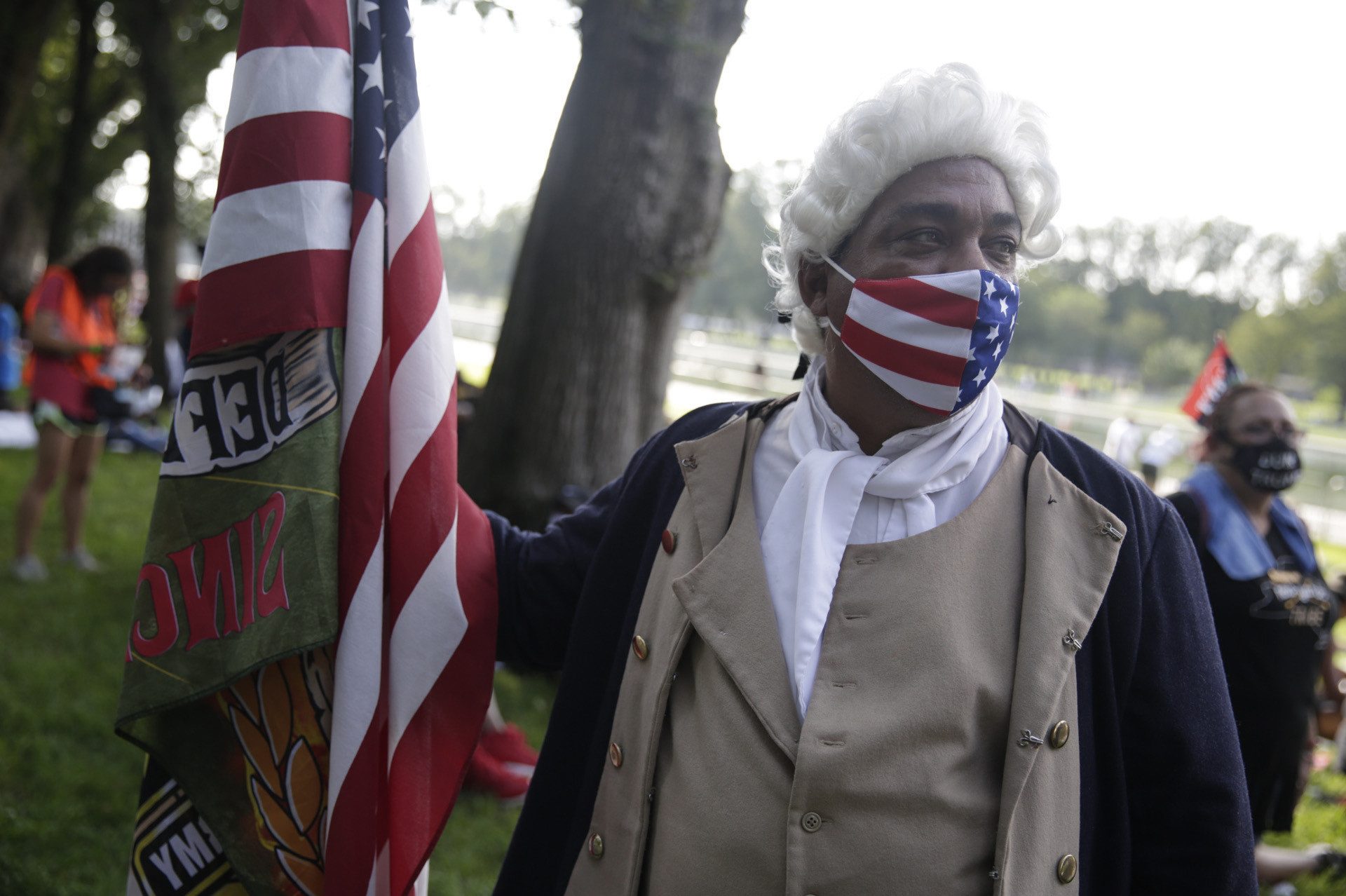 Ricardo ‘The Patriot’ from Polk City, Florida, said “Black people have been here since before the United States was a country…and people forget that.” 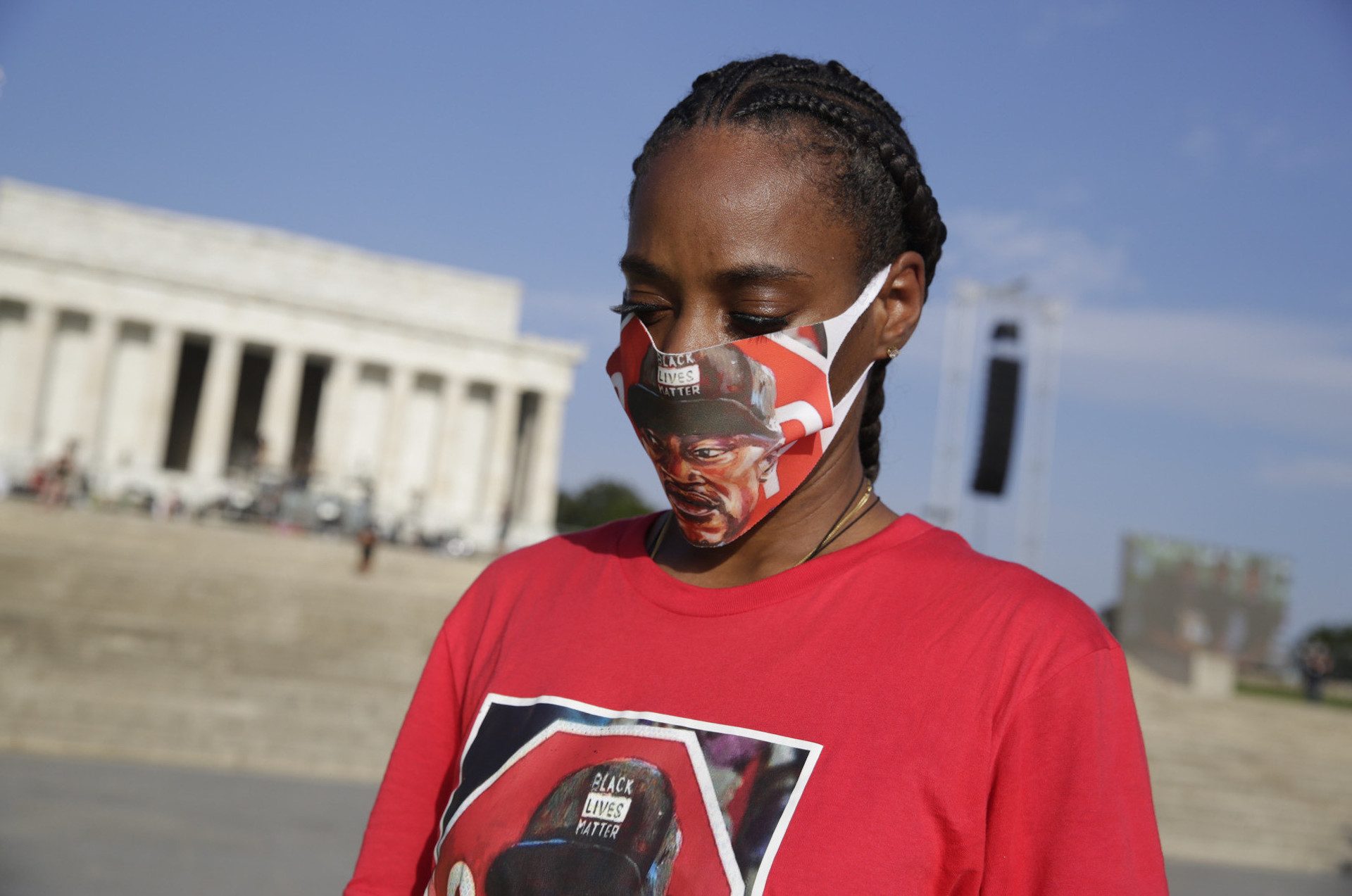 A.K. Caraway from Houston, Texas, was a classmate of George Floyd. She said: “Martin Luther King made this March and I am making the march for a change.”

The event also featured family members of Black Americans who have been killed by police or in other racially-charged incidents, including Floyd, Breonna Taylor, Ahmaud Arbery, Trayvon Martin and others whose names have become rallying cries during recent national protests demanding their killers be held accountable.

“I wish George were here to see this right now,” Philonise Floyd, brother of George Floyd said. “My brother, George, he’s looking down right now. He’s thankful for everything that everybody is doing right now.”

He added that elected officials need to take notice of how the killings of Black Americans have galvanized masses.

“Our leaders, they need to follow us while we’re marching to enact laws to protect us,” he said fighting back tears.

Tamika Miller, the mother of Breonna Taylor, who was shot and killed by Louisville, Ky., police in her home in March, addressed the crowd.

She expressed gratitude to demonstrators for helping to keep her daughter’s case in the public view, as the crowd broke into chants of “Say her name.”

“I just want to thank everybody who’s been in support of getting justice for Breonna Taylor,” she said. “What we need is change and we’re at a point where we can get that change, but we have to stand together [and] we have to vote.”

Before the march got underway, civil rights attorney Benjamin Crump, who represents many of the victims’ families, said “the problem isn’t de-escalation, the problem is racism.”

“Certainly, as with all these tragedies you want accountability because we can’t get justice,” Crump said Friday on NPR’s Morning Edition.

Several Democratic members of Congress also spoke at the event, including Rep. Ayanna Pressley, D-Mass., who told the crowd, “We are in unprecedented, uncertain times.”

She also painted a picture of America that she said is possible, but alludes many Americans of color. 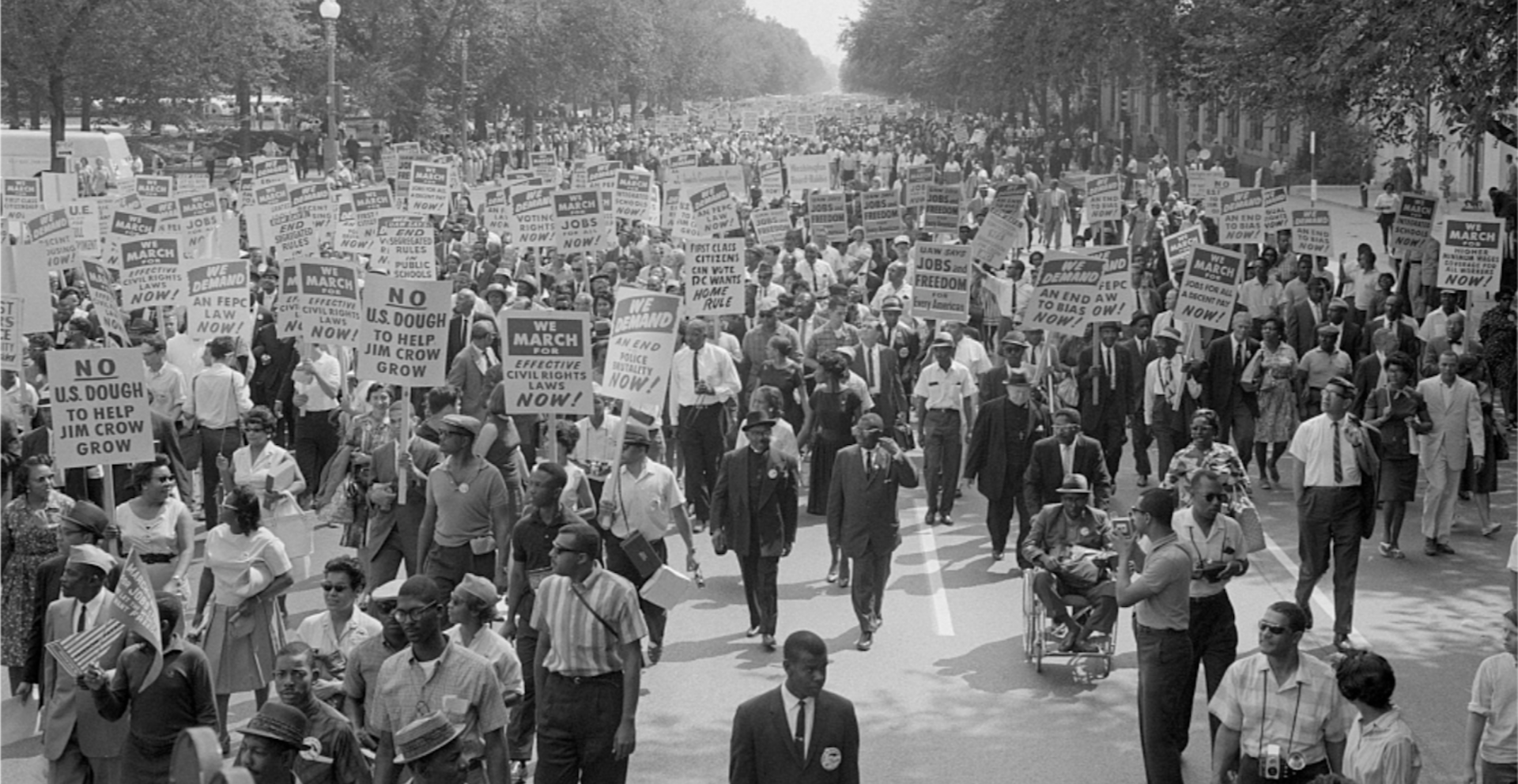 A scene from the original March on Washington, where Rev. Martin Luther King Jr., delivered his iconic “I Have A Dream Speech” in 1963. Demonstrators will again gather in Washington on Friday to call for racial justice and police reform.

Politics of the moment

Racial justice and police reform is a hot-button political issue as election day draws near.

“If we work together to challenge every instinct our nation has to return to the status quo … we have an opportunity to make history, right here, right now.”

During the speeches Friday, news broke that President Trump had granted a full pardon to Alice Johnson, the 65-year-old Black woman who whose life sentence he commuted in 2018, with the help by reality star Kim Kardashian West.

Johnson was a featured speaker at the Republican National Convention Thursday, the same night Trump accepted his party’s nomination for president.

In his acceptance speech Trump underscored his self-proclaimed moniker as the “law and order president,” while accusing Democratic challenger Joe Biden as someone who repeatedly tears down America.

The march also comes on the heels of another shooting, that of Jacob Blake by police in Kenosha, Wis., on Sunday. Blake, a Black man, was shot seven times in the back at close range. He is now paralyzed from the waist down, according to his family’s lawyers.

The shooting was captured on video and went viral on social media, sparking days of demonstrations that turned deadly this week.

A 17-year-old from Illinois allegedly opened fired on protesters in Kenosha, killing two and injuring a third. The shooter, a white male, reportedly has ties to a militia and is a staunch supporter of law enforcement.

He is facing six criminal charges, including first-degree intentional homicide, in connection with the shooting.

The ongoing coronavirus pandemic also loomed over the event, with many in the crowd wearing facial coverings. It was clear, however, particularly on the main stage that social distancing protocols were not followed by everyone.

Due to a requirement imposed by Washington, D.C., Mayor Muriel Bowser that visitors to the District from high-risk states self-quarantine for 14 days, turnout for the march is expected to be smaller than organizers had originally anticipated.

Event organizers had planned for 100,000 attendees, but a permit issued by the National Park Service indicates that about half of that is expected, according to The Washington Post.

Lock of Abraham Lincoln's hair and bloodied telegram up for auction