Becky Ansel is a violinist who’s been out of work since the pandemic started.

An informal Keystone Crossroads survey that asked people about their reasons for being unemployed found the most common answer by far was “my job doesn’t exist." 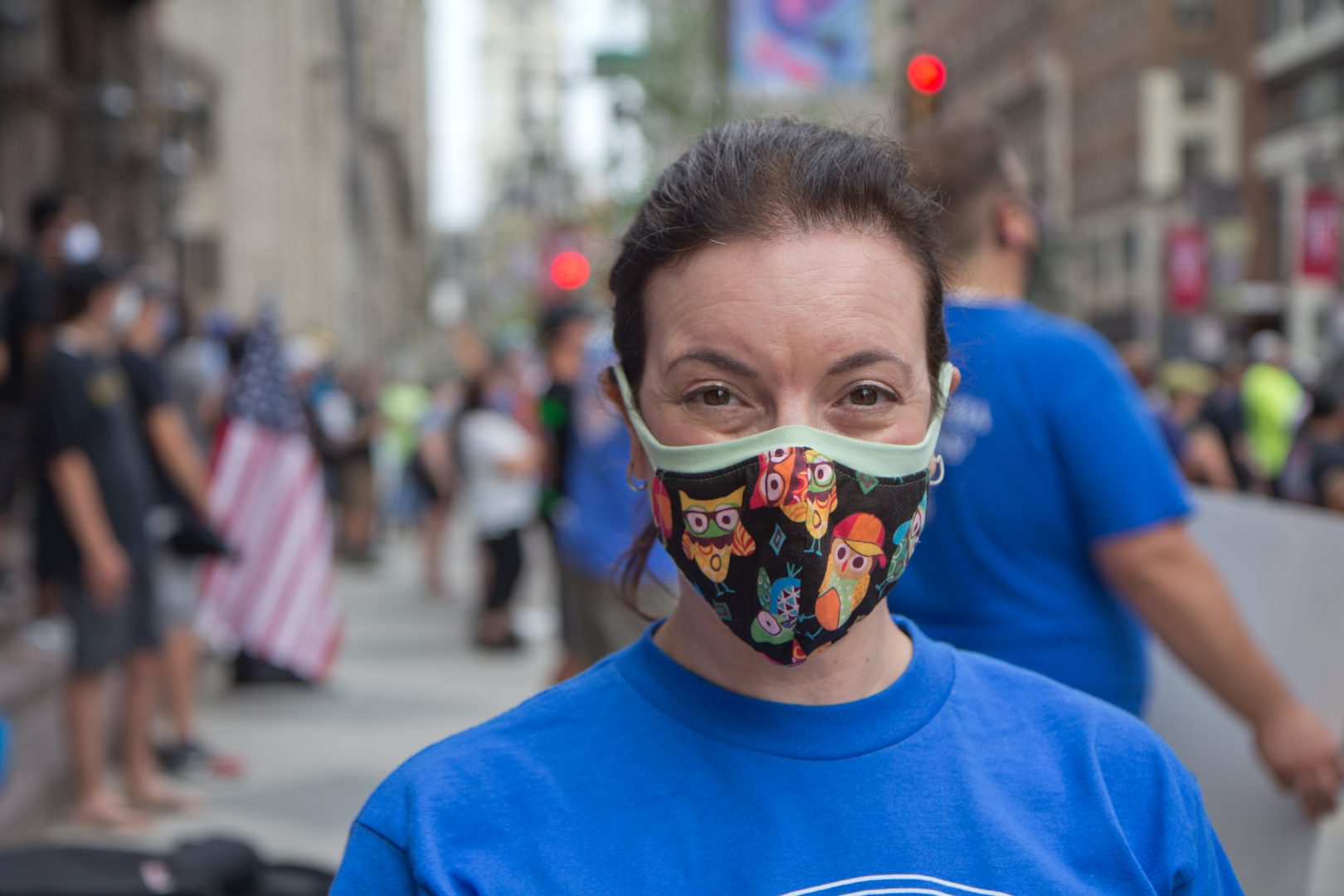 Becky Ansel is a violinist who’s been out of work since the pandemic started.

(Philadelphia) — Some parts of life look almost normal right now. Hair is being cut. Restaurant sidewalks are bustling. The stock market is soaring.

But in the five months since the coronavirus outbreak in the United States, safety concerns and business shut down orders have triggered a steep recession. As Wall Street rallies, millions of people are still out of work.

Becky Ansel, 47, used to play with a group of more than 40 musicians, packed into the orchestra pit with the Pennsylvania Ballet. Instead of playing for a crowd with others, she’s now practicing pieces written for a solo violin. Large gatherings are on hold, and the ballet is not budgeting for musicians at all in its upcoming seasons.

“You’re getting so many conflicting bits of advice. ‘Don’t go out!’ ‘Stay at home!’ ‘Look for a job!’ In my industry, it’s pretty hard to do that when our jobs are based on making music together,” she said.

Pennsylvania, which shut down early and aggressively, saw steep job losses at the beginning of the pandemic. Around a million and a half commonwealth residents are currently receiving some form of unemployment benefits, according to the most recent numbers available from the Department of Labor and Industry.

An informal Keystone Crossroads survey that asked people about their reasons for being unemployed found the most common answer by far was “my job doesn’t exist,” among other options that included health and child care concerns. Younger respondents worried about their professional prospects, older workers about their chances of getting rehired. All had bills on their minds. 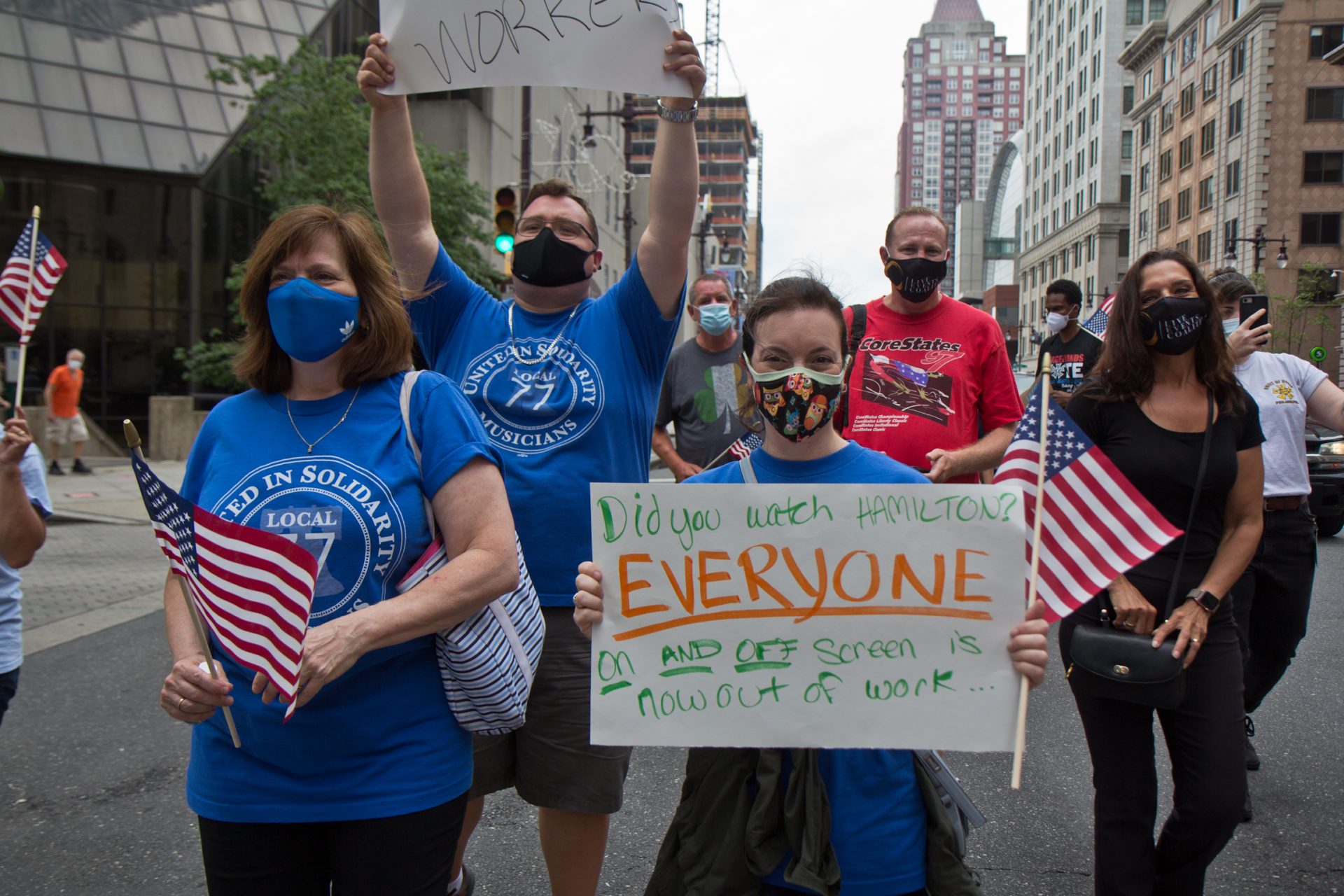 Becky Ansel marches at a protest demanding the extension of unemployment benefits for out of work musicians, stagehands and other out of work entertainment professionals.

“I am a catering chef. My lifelong career is about gatherings and food and good times. Will I ever have my job back??” wrote Crystal Yucalevich, who works in Glenside. She said a few events have returned, but not to the same degree as before the pandemic. “I’m not so sure that my profession (catering, cooking, baking, restaurants, etc) will totally survive this new world we are in.”

“Is this the time to retire, rug having been pulled out from under me?” wrote Teri Dignazio, a travel agent based in Chadds Ford.

The numbers back up their experiences. Hopes that the United States would get the pandemic under control quickly and the country would experience a rapid, “V-shaped recovery” seem to have been overly optimistic. Many analysts now predict a protracted turnaround, with the potential for a series of economic peaks and valleys.

In March, the plunge in jobs was cataclysmic.

“It was like we joined hands and jumped off a cliff together. So it was really abrupt, and really, really deep,” said Erica Groshen, senior labor economics advisor at the Cornell School of Industrial and Labor Relations, and former commissioner of the U.S. Bureau of Labor Statistics.

Following that drop, some of the jobs that were initially lost returned in May and June. But, Groshen says, that didn’t come close to erasing that initial drop, and now growth has slowed.

“We’ve had the quick part and now we’re in the long slow slog and the virus and policy are going to make the biggest difference,” she said. By analyzing different measures of employment “disruption” — basically any loss of work due to the pandemic — Groshen estimated that as of July, 23.8 million Americans were experiencing some disruption in their employment, down from a peak of 39 million.

In Pennsylvania, the unemployment rate ticked up in July to 13.7%. That number is more than three times what it was a year ago. Fewer than half of the jobs lost due to the pandemic have returned.

Jamie Lee, 37, from Wilkes-Barre, lost her job at an adult day care center in March, setting her family back on bills by a month until unemployment kicked in.

“To some people it doesn’t seem like a lot, but when you live it, it seems like your whole world is crashing down in front of you because you have no control over anything that’s going on,” she said.

Her husband delivers furniture and has been busier than ever, working six days a week. That’s started to take a toll on him physically. As the extra $600 in federal unemployment assistance expired, Lee blanketed her resume around town. 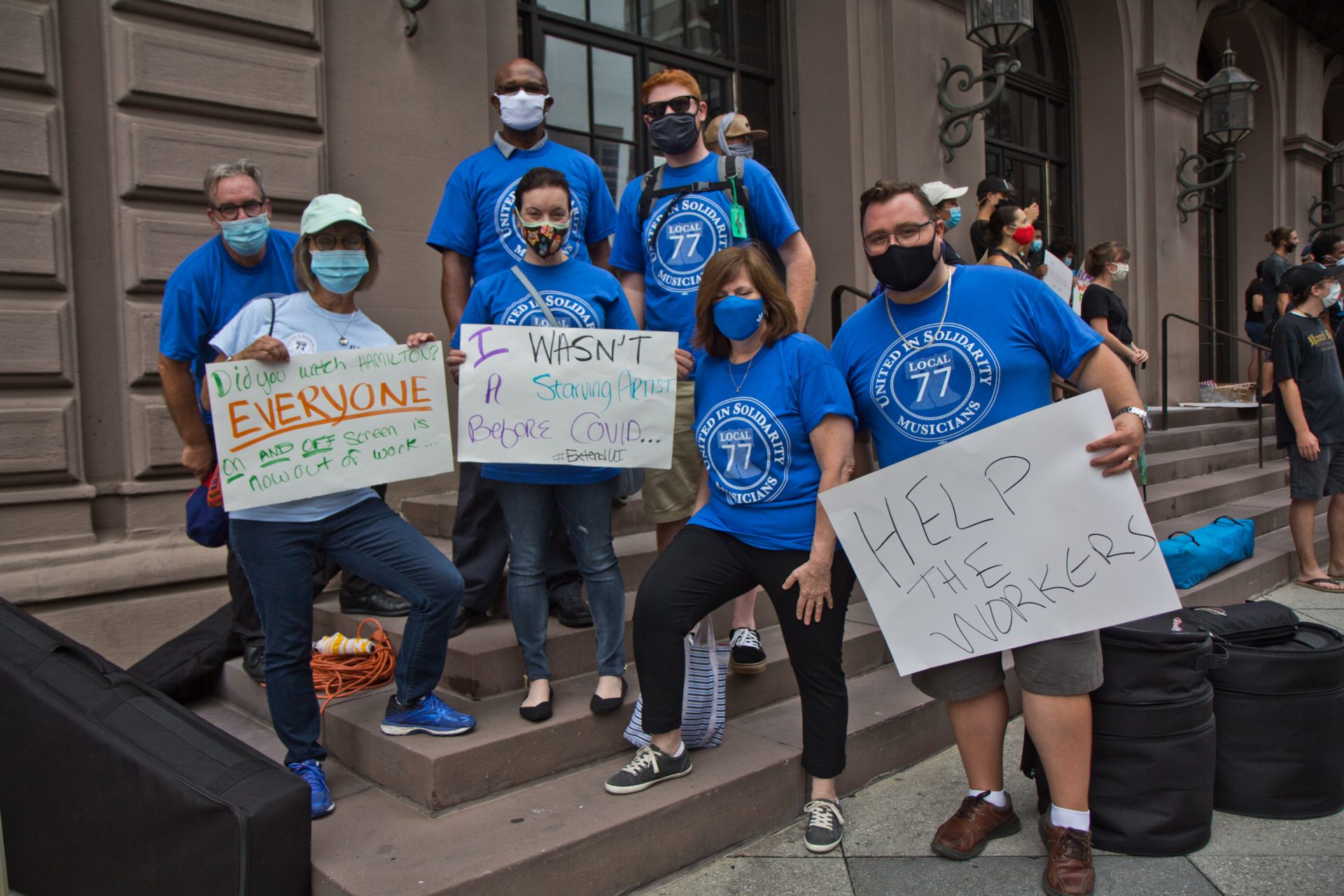 Becky Ansel with members of the Philadelphia Musicians’ Union Local 77 at a protest demanding the extension of unemployment benefits for out of work musicians, stagehands and other out of work entertainment professionals.

But she found many businesses that were still operating were in the process of losing, not hiring, staff.

“I had another employer which was just a local store tell me they couldn’t hire because they didn’t have the means to pay anybody. They had to [lay] people off,” she said.

The number of new unemployment claims — one placeholder for how many people are losing jobs each week — has dropped since March, but it’s still twice as high as it was in the weeks before the shut down. Nationally, there was an upswing in new unemployment claims in mid-August, showing many companies are still shedding jobs, even as others call workers back.

If health concerns or family obligations are a factor in the search for new work, be prepared to hunt even harder, said Shonda Woods, a single mom living in Delaware County. Woods had been working in human resources and as a rideshare driver before the pandemic.

To be able to juggle her children’s virtual school and to lessen the chances of contracting the coronavirus — she and one of her sons have asthma — she’s searched exhaustively for a job that would let her work from home. She estimates she’s filled out hundreds of applications, pouring through online job portals. 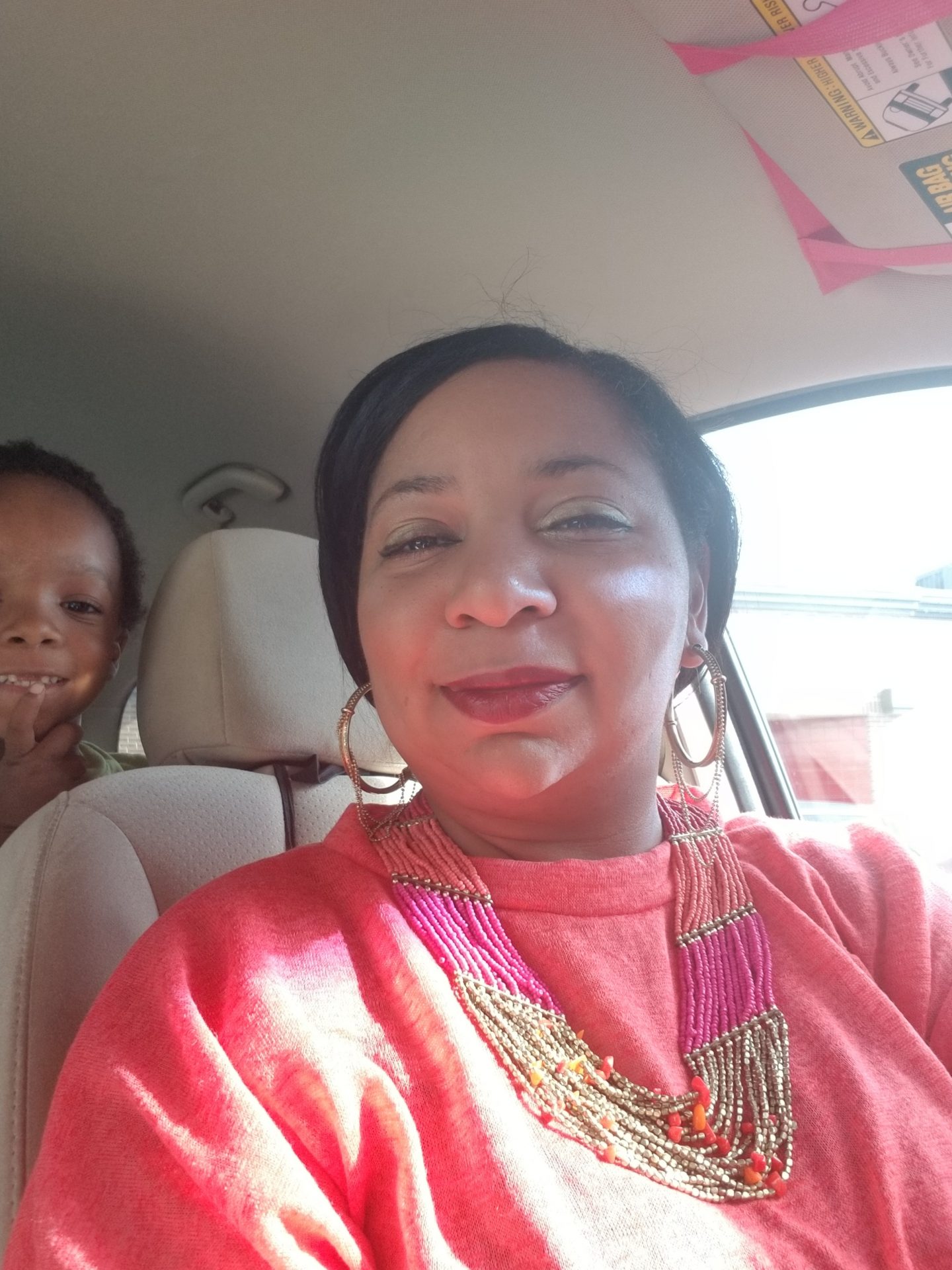 All of the automated replies “filled up my inbox,” said Woods. “I must have dumped it out 10 times.” She’s had a couple of interviews, but no offers yet.

On the flipside, workers who can’t or prefer not to work virtually may not have a choice.

Gwendolyn Blackshear, 40, a substitute teacher living in Philadelphia, reached out to Keystone Crossroads initially with this story: “My substitute teaching job goes fully virtual in September, yet I don’t own a laptop with a camera.”

Blackshear recently earned her doctorate in education at Drexel University, and is hoping to break into college-level work. 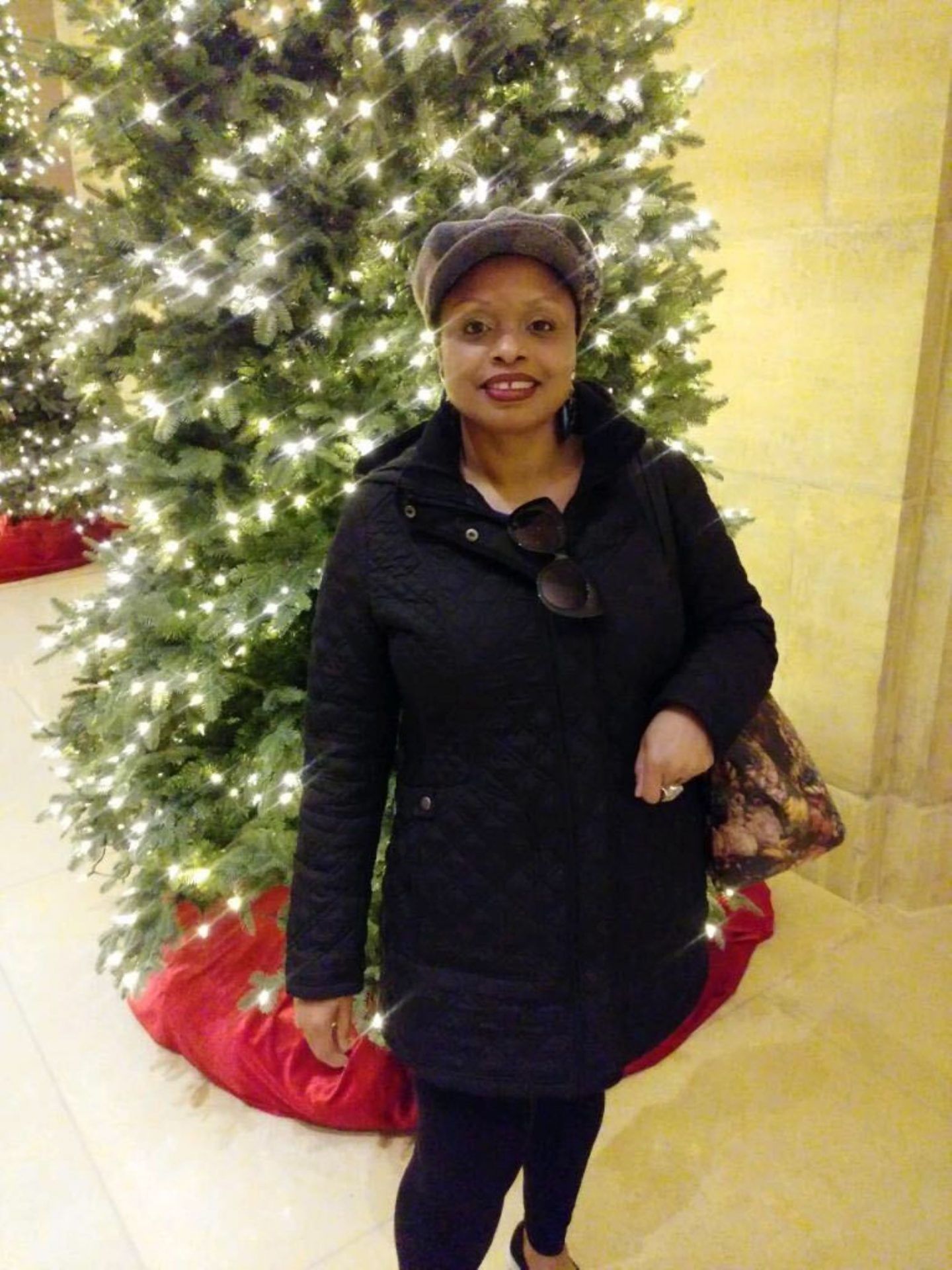 “Even though they’re going to be doing virtual, to me, that’s nothing, that’s not real,” said Blackshear. “I am more for in-person, personal, human relations. I like to see and touch and feel people. I don’t like this computer stuff, I hate it. But that’s life, ‘cause this is where everything is going.”

Groshen agreed, saying recessions “move us faster towards long term structural changes that we were heading towards anyway… businesses more associated with the ‘older way’ are more likely to fail.” Those changes could include a turn to more virtual meetings and conferences, as well as the possibility for more local manufacturing as companies seek to diversify their supply chains.