In this Wednesday, May 6, 2020, photo, United States Postal Service carrier Henrietta Dixon sorts mail to be delivered before she sets out on her route in Philadelphia. Dixon has been with the post office for nearly 30 years, the last nine on her current route.

The postal service has been removing machines from Pennsylvania sorting facilities. How is that affecting the state’s election planning?

At least 26 mail scanning and sorting machines have been taken offline at eight mail processing sites this summer across the state. 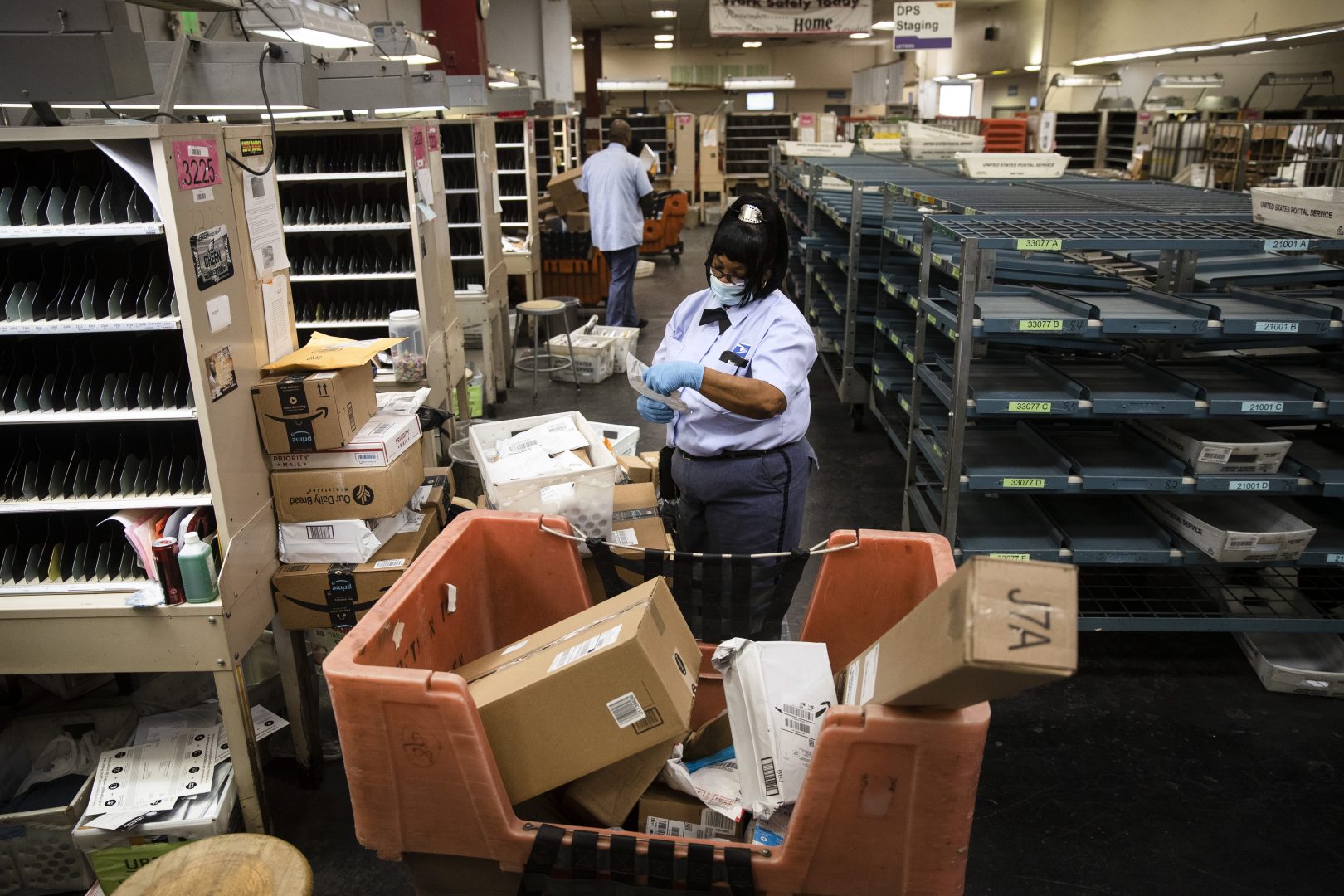 In this Wednesday, May 6, 2020, photo, United States Postal Service carrier Henrietta Dixon sorts mail to be delivered before she sets out on her route in Philadelphia. Dixon has been with the post office for nearly 30 years, the last nine on her current route.

Pennsylvania hasn’t been spared from the mail system cutbacks that — a few months before an anticipated vote-by-mail surge for the presidential election — prompted public outcry, a 20-state lawsuit against the Postal Service and the summoning of Congress back to Washington.

At least 26 mail scanning and sorting machines have been taken offline — and, in most cases, promptly trashed or taken offsite — at eight mail processing sites this summer across the state.

The specifics vary among Pennsylvania’s sorting facilities: In Scranton, for example, only machines used to handle mail surges were removed, while Harrisburg’s initial process capacity has been halved with the loss of a postage canceling device. 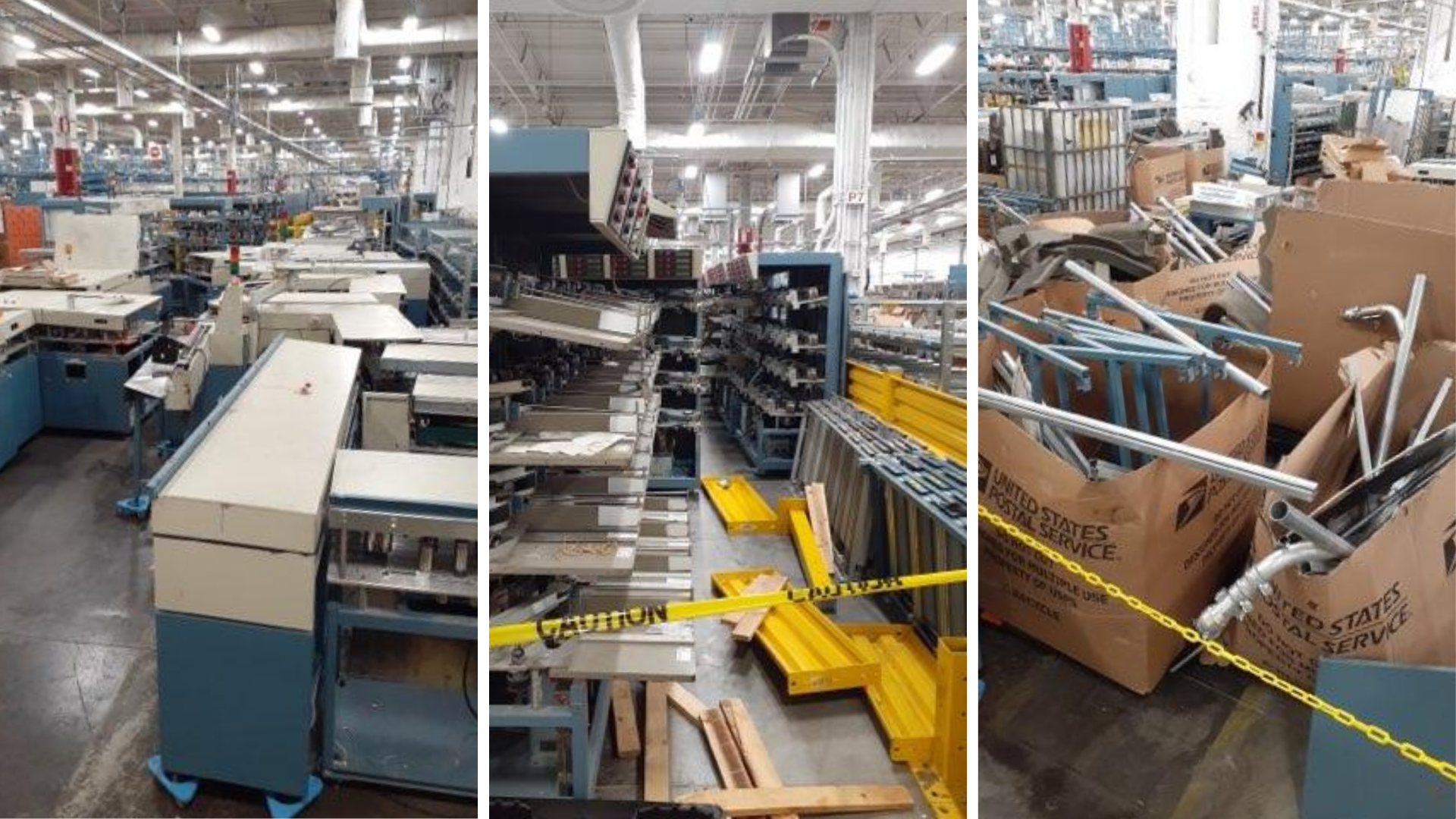 Various pieces of mail sorting equipment at the Philadelphia Processing Plant, disassembled and ready to be sent to a scrap yard, according to a union source with knowledge of the process.

The lawsuit, filed by 20 state attorneys general against the U.S. Postal Service, cites a 20 to 40 percent capacity reduction nationwide due to a round of operational changes planned since at least one year ago by USPS in response to declining first-class mail volume.

“We acknowledge letter volume is down, but is it a knee-jerk reaction to remove equipment?” said Joe Szocki, president of the American Postal Workers Union Local 269–Erie.

President Donald Trump has acknowledged that withholding USPS funding could hamper mail-in voting — and he said vote-by-mail would benefit Democrats. So, the timing of the removal has raised alarm about the Postal Service’s ability to ensure all mailed ballots are counted. Trump’s re-election campaign also is suing the Pennsylvania Department of State and all 67 counties’ election boards to limit in-person mailed ballot delivery to county election offices.

USPS has gone through budget and service cuts before. Voting rights advocates’ push for more generous ballot return deadlines isn’t new either. But the pandemic, lawsuits and legislative inaction have compounded both issues.

In Pennsylvania, ballots must be received by 8 p.m. on Election Day. However, a ballot postmark deadline and three-day receipt extension are under consideration by the courts and the state legislature.

Overall, processing capability at Pennsylvania’s principal sorting facilities doesn’t appear to be drastically affected, at least at this juncture.

But other operational changes across the state could have a greater effect on mail-in voting. For example: Carriers are now required to depart for their routes each day at a certain time. That means trucks must leave processing facilities at a certain time, even if mail scheduled to go out that day remains to be processed, union leaders say.

Election mail, however, “goes right to the top of the pile,” says Andy Kubat, who heads the Lehigh Valley postal workers union.

“I can’t say that they get special treatment, but because they are pre-printed on envelopes that are labeled as business mail, they do flow through the system a little more quickly than, say, handwritten letters or things like that,” Kubat said.

Nick Casselli, who leads the Philadelphia local of the American Postal Workers Union, said that kind of mail is typically given priority, allowing workers to sort and deliver it faster.

“In the 35 years I worked in the post office, we’ve always treated campaign literature and ballots as priority mail, and that will remain because that’s a hot item right now.”

Lehigh, Philadelphia and Pittsburgh each lost about 20 percent of their sorters in recent weeks, while Erie took a 33 percent hit, according to a removal schedule WITF obtained and confirmed with union leaders at each site.

Kubat, Casselli and Szocki say they can manage the extra election mail because it’s not much extra relative to typical volumes.

But some others worry they can’t pull it off without the extra equipment, overtime and other resources that had been more readily available and didn’t make this year’s budget given the relatively recent pandemic-driven surge in mail-in voting.

“During the primary, there were no major problems — but that wasn’t a major national election [that’s contested] like the one we are looking at,” says Kevin Gallagher, state APWU vice-president.

Kim Miller, president of the Keystone chapter in Harrisburg, expressed similar concerns. The removal of one machine halved postage scanning capacity there, while sorting remains at 92 percent capacity after the elimination of three mail sorters in Harrisburg.

“I’ve seen more people electing to request to have mail-in ballots,” Miller said this week. “And with the increase of mail-in ballots, if we don’t have the machines, there’s going to be a delay.”

Some post office regions could have to make even more adjustments if Pennsylvania implements an Election Day ballot postmark deadline along with the three-day receipt extension currently under consideration by the courts and the state legislature.

Szocki noted that during the primary, Erie postal workers pulled out election mail and delivered it in pallets directly to the main county offices to save the trip to Pittsburgh for postage canceling. Philadelphia used a similar process, though a judge ruled those ballots didn’t count without a postmark.

“I still would tell people — even though I’m confident we’ll be able to handle it — to request early and mail early,” Kubat said. “Or … drop it off in person.”

In response to USPS upheaval and election procedure uncertainty, officials in multiple Pennsylvania jurisdictions — including  York and Lehigh counties and Philly and its suburban collar counties — are exploring satellite election offices to try to accommodate voters concerned about the mail slowdown without risking running afoul of future court rulings that might ban dropboxes.

Voters will be able to use dropboxes outside county government headquarters in Lebanon and Erie counties, and a secure mail slot in Carbon, according to election officials.

Montour County officials expect to extend courthouse hours during the two weeks leading up to Nov. 3 to facilitate ballot dropoff for voters, according to chief clerk and director of elections Holly Brandon.

Editor’s note: This post was updated to add information about counties’ plans for ballot dropoff.