Election coordinator Charlene Maloney processes a mail-in ballot at the Bucks County Board of Elections office prior to the primary election, Wednesday, May 27, 2020 in Doylestown.

Under current law, it is the close of polls on election day, Nov. 3 at 8 p.m. 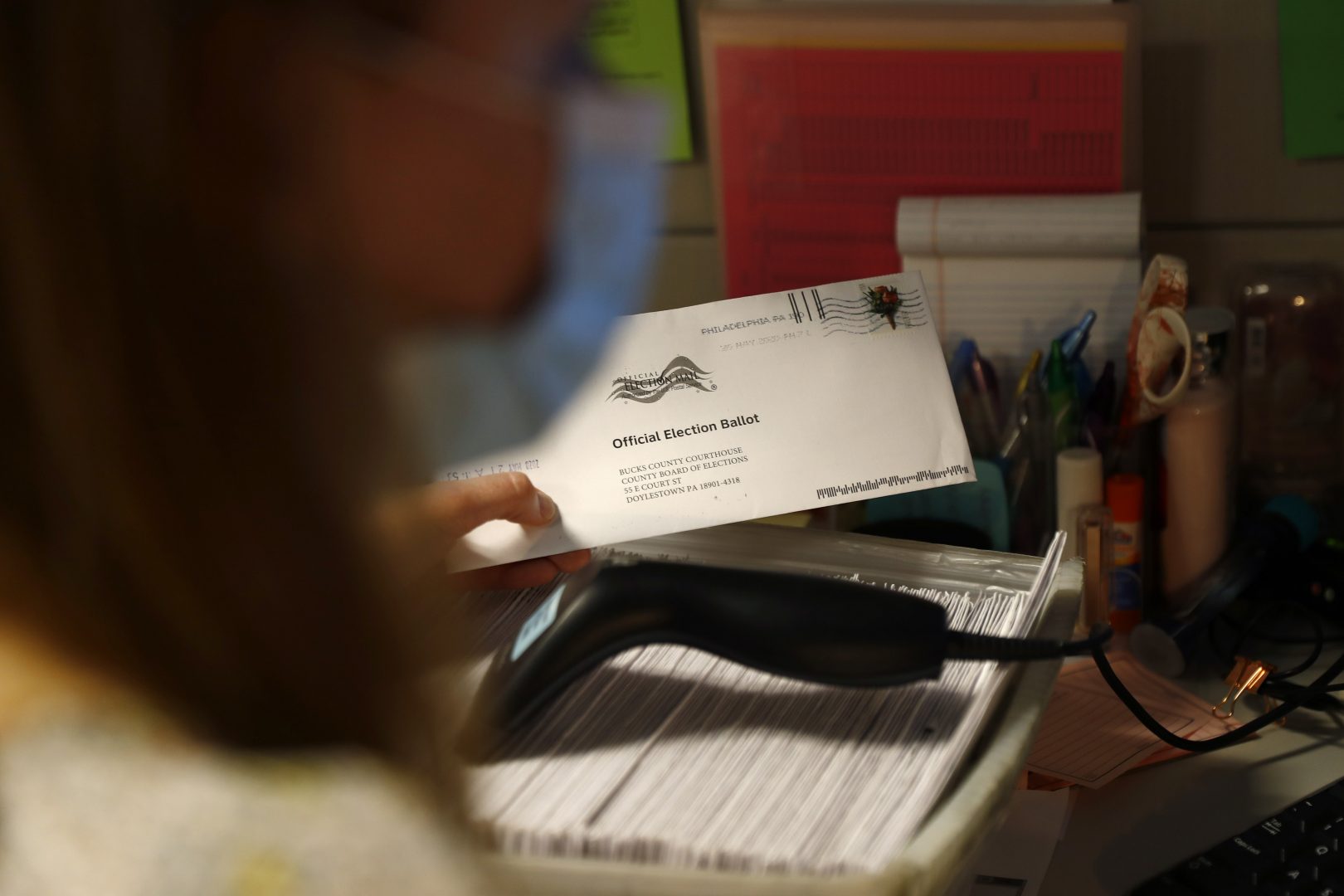 Election coordinator Charlene Maloney processes a mail-in ballot at the Bucks County Board of Elections office prior to the primary election, Wednesday, May 27, 2020 in Doylestown.

(Harrisburg) — Citing a warning by the U.S. Postal Service about its delivery times, Gov. Tom Wolf’s administration is asking the state Supreme Court to extend deadlines for mail-in ballots to be received in the November election when Pennsylvania will be a premier presidential battleground.

The filing, submitted after hours Thursday to the state’s highest court, cited a letter dated July 29 by the general counsel of the U.S. Postal Service, Thomas Marshall.

In it, Marshall warns that Pennsylvania’s mail-in ballot deadlines are “incongruous” with the postal service’s delivery standards and he recommended that voters mail in their ballots a week before the deadline for it to be received and counted.

That deadline, under current law, is the close of polls on election day, Nov. 3 at 8 p.m. But Wolf’s administration pointed out that state law allows voters to apply for a mail-in ballot up until a week before the deadline, nevermind mail it in.

“To state it simply: voters who apply for mail-in ballots in the last week of the application period and return their complete ballot by mail will, through no fault of their own, likely be disenfranchised,” Wolf administration lawyers wrote in the 13-page filing. 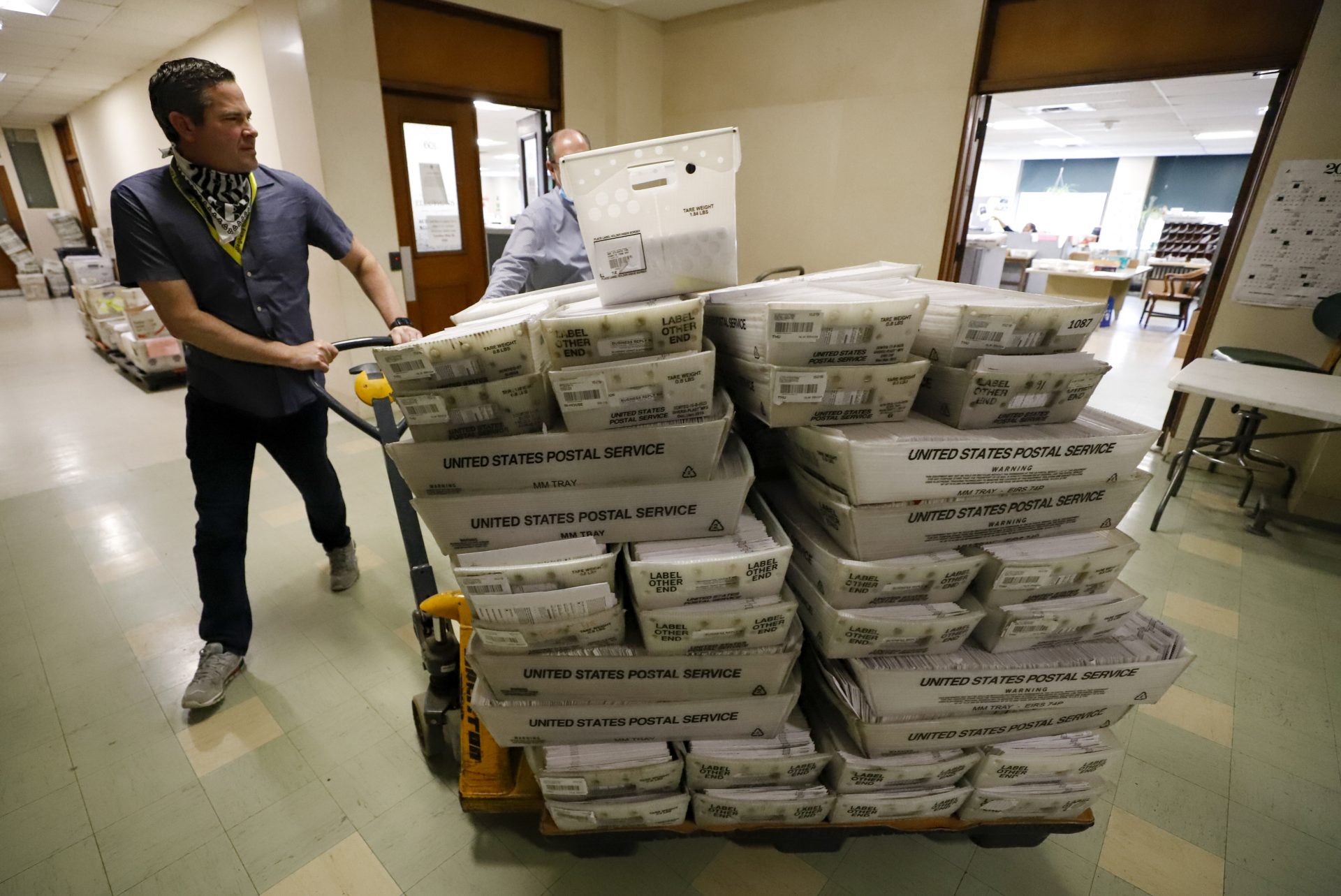 Chet Harhut, deputy manager, of the Allegheny County Division of Elections, wheels a dolly loaded with mail-in ballots, at the division of elections offices in downtown Pittsburgh Wednesday, May 27, 2020. The once-delayed June 2, Pennsylvania primary will feature legislative and congressional races, a first run for some new paper-record voting systems and the inaugural use of newly legalized mail-in ballots.

As a result, Wolf’s administration is asking the state Supreme Court to order that ballots postmarked by 8 p.m. on Nov. 3 be counted if they are valid and received during the three days following the election.

Ballots received during those three days but lack a postmark or legible proof of mailing should also be counted, the administration’s lawyers wrote.

The court filing came the same day that President Donald Trump frankly acknowledged that he is starving the U.S. Postal Service of money in order to make it harder to process an expected surge of mail-in ballots, which he worries could cost him the election.

Trump’s campaign and the Republican Party is also suing in federal court in Pennsylvania in an effort to block the use of drop boxes, which were used in some counties in the primary to make it easier for voters to submit mail-in ballots on time.

That election was the first test of a 2019 state law that allows voters to mail in a ballot, without an excuse that meets narrowly tailored definitions in state law. However, demand for mail-in ballots unexpectedly skyrocketed during the pandemic, as voters preferred to vote by mail rather than go to a polling station in person.

More than 1.4 million Pennsylvanians voted by mail in the primary, or about half, smashing a state record made possible by the sweeping new election law Wolf signed last fall.

In the 2016 presidential election, 6.1 million voters cast ballots, as Trump’s narrow victory in Pennsylvania helped pave his path to the White House.