"This despicable act does not represent who we are as a community."

(Harrisburg) — Several community groups, as well as elected leaders from the city of Harrisburg and Dauphin County, are condemning spray painting of two swastikas on the Kesher Israel Congregation in the Uptown neighborhood earlier this week.

The Anti Defamation League of Philadelphia, which tracks anti-Semitic incidents across the country, said in a statement the vandalism at Kesher Israel is the third time in less than a month that a Pennsylvania synagogue was attacked.

The group pointed to an internal report that shows Jewish communities were targeted 109 times in 2019 alone, a stark increase from the commonwealth’s historic average of 64 attacks per year. 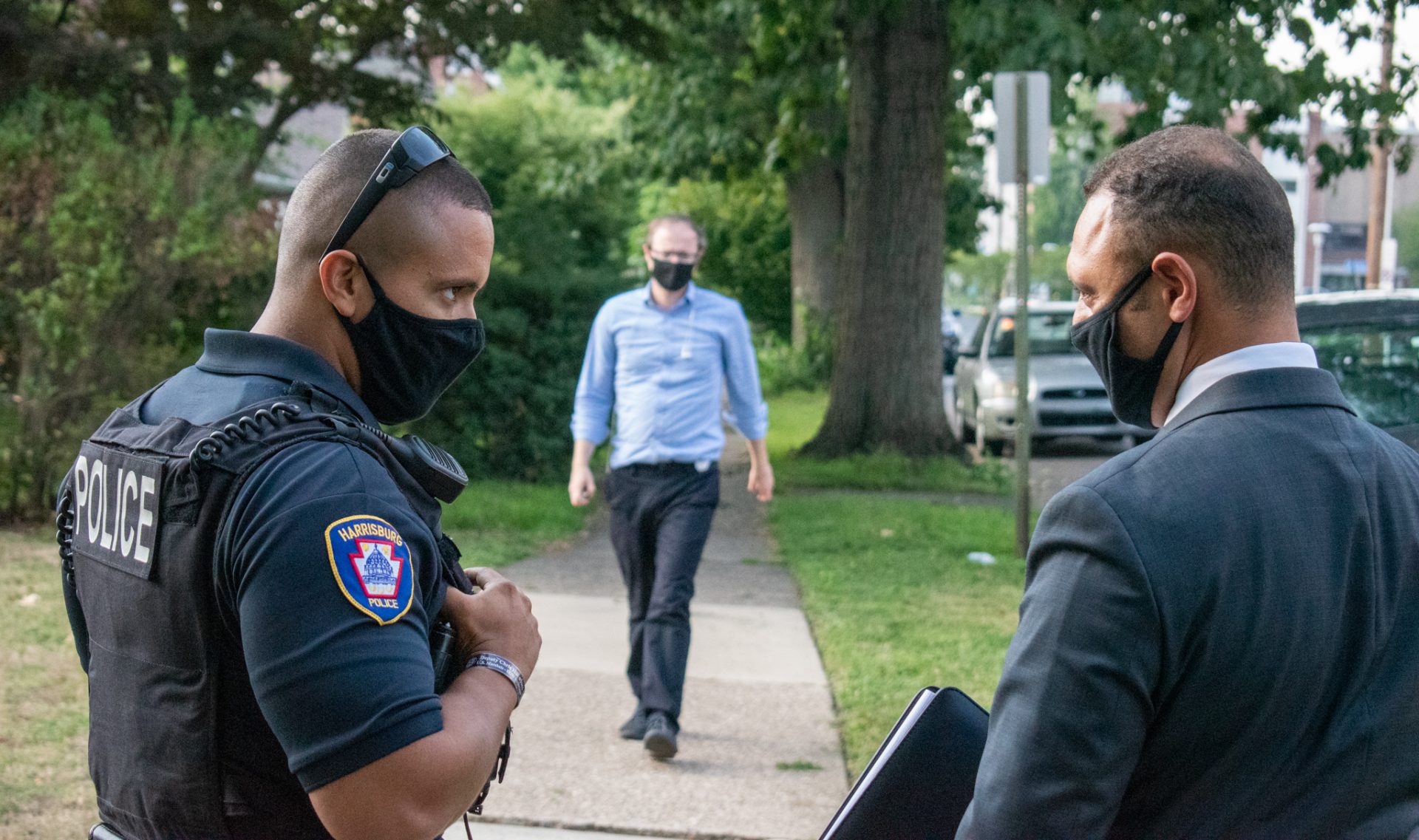 A Harrisburg police officer talks with Pennsylvania State Police Trooper Ismail El-Guemra, at right. In the background, Rabbi Elisha Friedman walks toward the officers as he describes what he saw.

ADL Regional Director Shira Goodman called on investigators to view the vandalism as a hate crime.

“The swastika is one of the most painful hate symbols for Jews. Its meaning is clear. The perpetrators intended to terrorize their targets, but the Jewish community of Harrisburg will not be cowed,”  Goodman said.

“This despicable act does not represent who we are as a community. We are people of faith, love and hope, and we will be stronger than ever,” the board of commissioners said in a statement.

Harrisburg Mayor Eric Papenfuse condemned the vandalism “in the strongest terms.” The Mayor’s Interfaith Advisory Council will also be holding a vigil tonight at 5 pm outside the Temple (2500 North Third Street).

“We stand in complete support of and solidarity with the members of Kesher Israel and the entire Jewish community of Greater Harrisburg. An attack on one of us is an attack on all of us,” MIAC Co-Chair Russell Goodman said.

The Jewish Federation of Greater Harrisburg collected the responses below from people and groups across the area:

“All of us at Temple Ohev Sholom share in your sadness and outrage over the recent vandalism at Kesher Israel synagogue. An attack on one Jewish institution is an attack on all Jewish institutions, and we are here for you as your neighbors and friends to fight anti-Semitism wherever it exists and to support you at this difficult time.”
— Temple Ohev Sholom Rabbi Peter Kessler and President Rob Teplitz

Hate has no place in our community, we stand with all the members of IRF and their faith. We condemn in strongest terms any violence against anyone”. We support Jewish Community and their places of worship wherever they may be in the world. People of Kesher Israel Synagogue, we stand in solidarity and support.
— Hindu American Religious Institute Chairman Kanti Jasani

“We stand in firm solidarity with our Jewish Family.  Hate and racism have no place in this world.”
— Laura Pickering Ford, Harrisburg Friends Meeting

We lament that we are living in a time where hate-filled rhetoric is sparking actions aimed at instilling fear in those labeled as “other.” We join with neighbors in our community to stand with the Kesher Israel Congregation, offering our prayers and support. In doing so, we shine the light of God’s love with the confidence that it is stronger than the darkness of hate and fear.
— Pennsylvania Council of Churches Director of Advocacy & Ecumenical Outreach Rev. Sandra L. Strauss

“The despicable and callous act that most certainly was rooted in antisemitism with regards to the desecration of Kesher Israel Congregation is not only condemned by the Pennsylvania Human Relations Commission.  But it calls us to an even higher level of our humanity to not only just stand with Kesher Israel Congregation at this moment but in the days to come and to be prepared to assist when called upon.”
— Pennsylvania Human Relations Commission Executive Director Chad Dion Lassiter