Now is the time to start biking

"It's freedom. When you were a kid and you got a bike and you could go riding around and it was just freedom. And that's what it can be for adults, too." 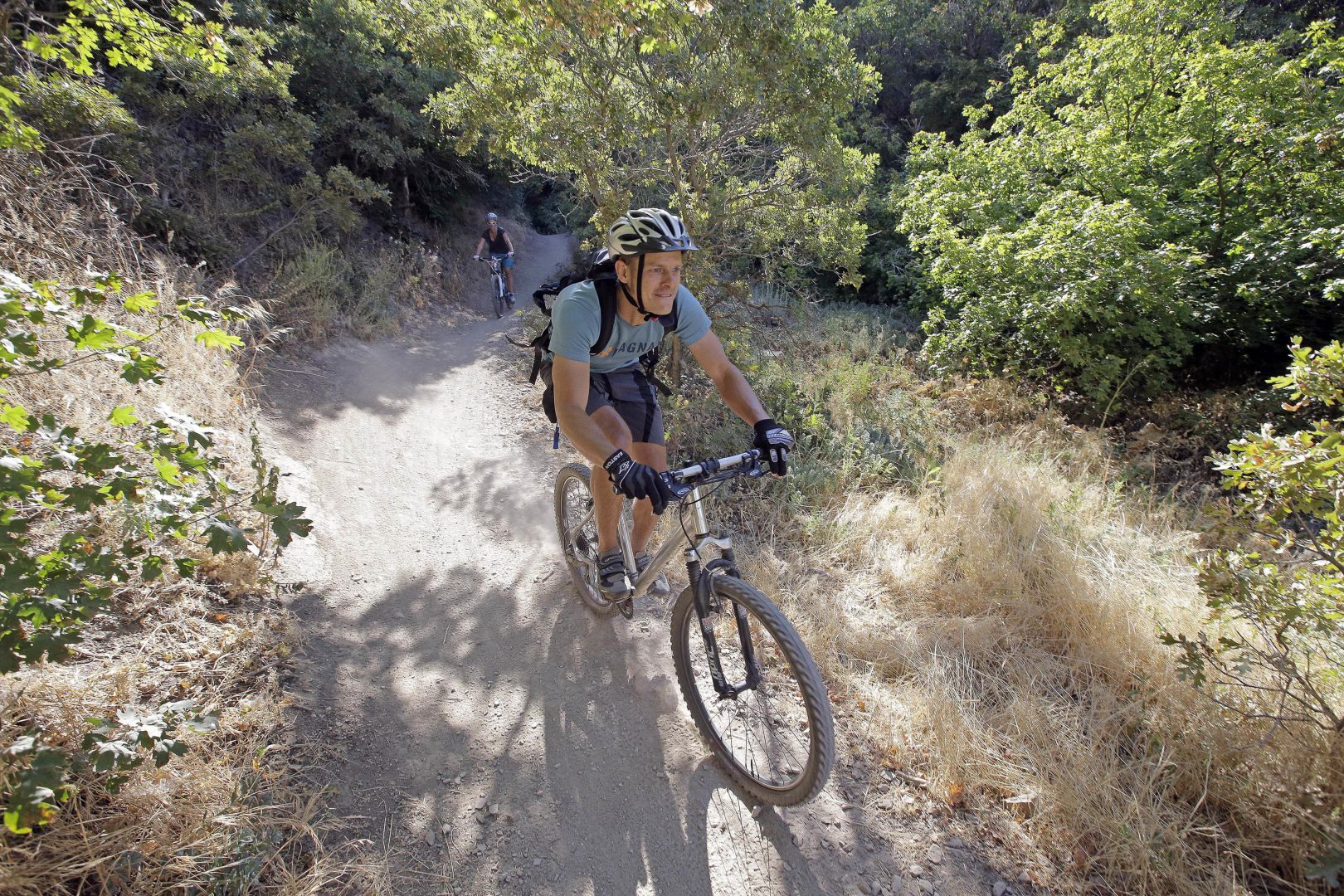 (Washington) — Like many others, I’ve spent much of these last few months cooped up in my apartment. But lately, I’ve been trying something new to combat the COVID-19 Blues: When the world is too much, I hop on my bike. Out in the road, the breeze on my face makes the air feel crisper. Lush tree canopies arch over the street in front of me. I can hear the whirring of my wheels on the pavement. I feel apart from everything. I feel safe and relaxed.

I’m not the only one. In March, when the pandemic began to dominate public consciousness in the U.S., bike sales were 50% higher than the year before. It makes sense: Experts say the risk of coronavirus infection is lower outside than it is inside, and it’s fairly easy to maintain social distance on a bike. Plus, regular exercise is good for your mental and physical health. If you ever had an inkling that biking might be for you, now seems like a good time to try it out.

Like any new habit — and, let’s be honest, any new exercise habit — starting to bike regularly is easier said than done, so we asked three expert bikers to guide us along.

Go Easy On Yourself

Robbie Webber is on the board of directors for Madison Bikes in Madison, Wis. She has been teaching people how to bike for more than 20 years. One of the first things she has students do is think about their first bike, and she says one common theme often emerges.

“It’s freedom,” she says. “When you were a kid and you got a bike and you could go riding around and it was just freedom. And that’s what it can be for adults, too.”

To get to that point, she says a lot of new adult bikers have to overcome their own intimidation, that many people just don’t see themselves as bikers. They think they have to be in peak physical shape. But she says that’s not the reality.

“A lot of people bike. You see lawyers on bikes. You see moms with kids. You see older people. You see college professors, but you also see college students. People aren’t necessarily wearing Lycra,” she says. “If you saw me, you’d be less intimidated about biking.” She’s 62, and she says, “I am overweight and out of shape. But I can bike because I just take my time and I’m not worried about people passing me.”

She says it’s helpful to start small. Don’t try biking somewhere for the first time when you’re in a hurry or have an important meeting. Bike somewhere closer and low-stakes, like a quick run to the store or to a friend’s backyard. Work your way up to more far-flung destinations.

Webber says that mentality, of taking it easy, can be extended to the route itself. Try out different routes to find the one you’re most comfortable with, whether that’s a road with little car traffic or one without a lot of hills. Visit a bike shop to get maps of your city’s bike paths and lanes. Ask a friend who bikes for suggestions or to go on a ride with you.

“Believe it or not, people often are glad to share their knowledge. You may not be able to shut them up once you ask them for help,” she says. 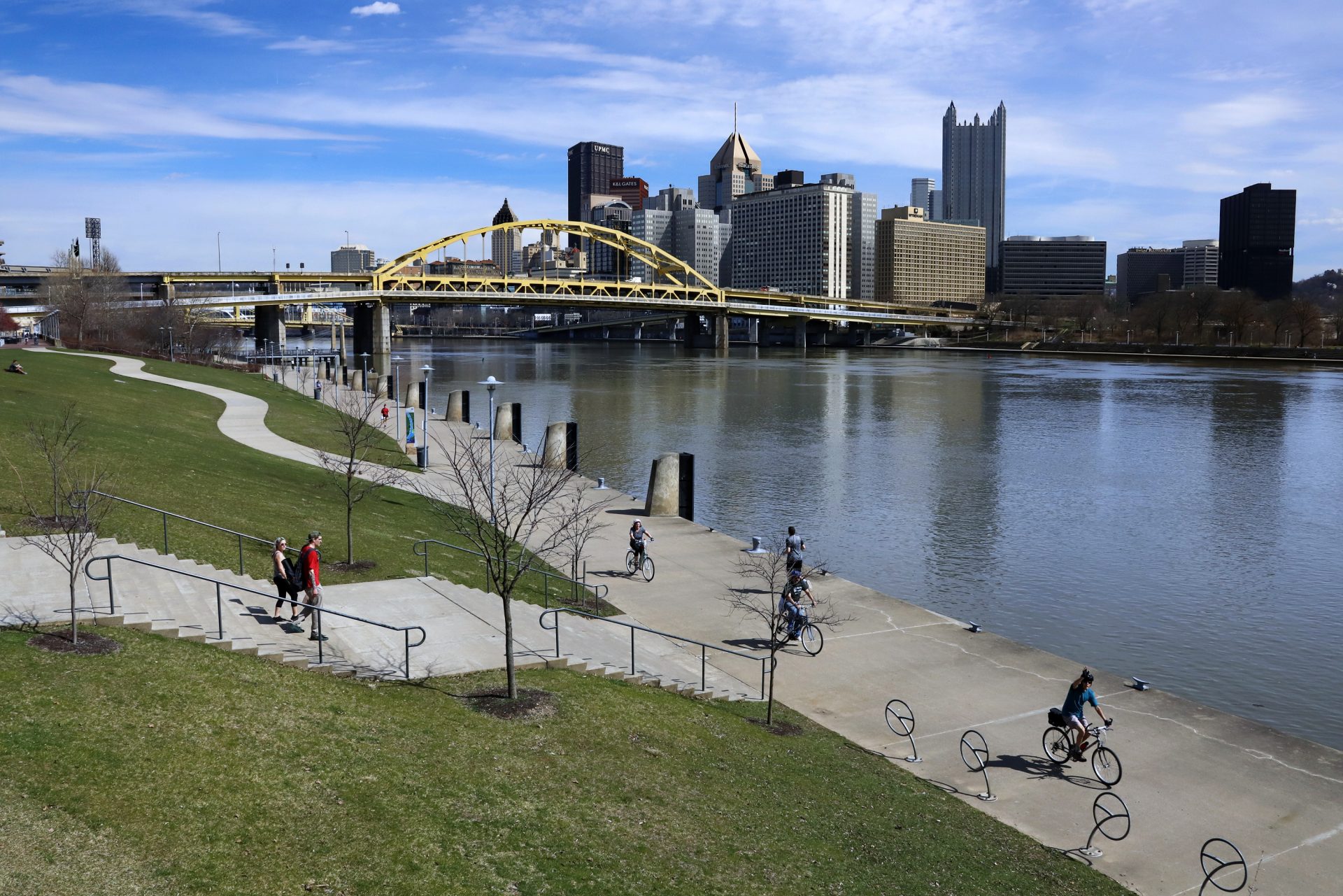 People ride their bicycles along North Shore on Thursday, March 26, 2020, in Pittsburgh.

You Don’t Need A Ton Of Gear To Get Started

Once you’ve moved past intimidation, it’s time to think about gear. That too can feel overwhelming, but Shequaya Bailey, president of the Pittsburgh Major Taylor Cycle Club, says it doesn’t have to be. She says you really only need three items to get started.

“Bare minimum, I’d say: some sort of bag to carry your items in to make sure they’re secure, a helmet, and the main item you really need is the bike,” she says.

When you go to a bike store, Bailey says, it’s important to tell them what kind of biking you’re planning on doing. If you’re biking on gravel or unpaved trails, consider a mountain bike. A road bike or a hybrid, which have thinner tires, is a better match for city streets. For hills, you might want a bike that has gears.

“Any bike shop worth their salt will have you test ride several bikes,” she says. “You’ll go down the block and ride around and they’ll give you a few to try and see how you like it. And you’ll change the gears and see how you like that. Anyone who wants to sell you a bike without a test ride? You want to walk out.”

You don’t have to buy a new bike either. Once you know what kind of bike you want and the right size for you, you can always get one used. If your city has a bike share program, you can also use that instead.

Once you’ve got a bike and a helmet, think about how you want to carry all your belongings. That could be a simple backpack, but it could also be a basket on your bike or a pannier, which is a saddle bag clipped onto a bike rack.

Beyond those three main elements — a bike, a helmet and a bag — Bailey says it’s also key to think about clothes. In the summer, athletic shorts and a t-shirt will often do, maybe with a change of clothes for when you arrive. But what about winter biking?

“Having a couple different layers is super helpful,” she says. She recommends putting a wool layer closest to your body, because it’s warm and dries quickly. For the outer layer, something that’s wind and waterproof. She also stressed the importance of good gloves and a face covering, something that should be ubiquitous these days anyway.

Once you’re geared up, it’s time to get out on the road. But how do you stay safe? Claudia Corcino, co-founder of Ciclistas Latinoamericanos de New York, has a lot of tips for staying safe while biking.

“Use reflective clothing. Follow the rules of the road. Also, signal. Not many cyclists signal when they are in the road,” Corcino says. “I will also tell cyclists not to use headphones or listen to music. Because sometimes you get distracted and you have to be aware of what is behind you.”

Corcino says all those tips can be summed up in a simple idea: “Anything that could make you predictable with the drivers.”

To be a good biker, it helps to think and act like a good driver: Don’t run red lights or stop signs. Signal when you’re turning. Use lights at night. Pay attention to your surroundings.

If a bike lane exists, use it. The League of American Bicyclists says bikers should try to give cars three feet of space, but they shouldn’t bike in the gutter either. If the road is too narrow, ride in the middle of the lane. You don’t want to tempt drivers to try to squeeze past you. It’s about maintaining a balance, and that’s not always easy.

More robust local infrastructure, like protected bike lanes, can help bikers avoid having to make those tough choices in the first place. And, Corcino says, drivers play a huge role in keeping bikers safe too.

“Please don’t double park, or don’t park on bike lanes. Please be mindful of opening your door. Please look and watch for cyclists,” she says.

There’s a simple trick, for instance, for opening a car door with biker safety in mind. It’s called the Dutch Reach: When exiting a car, the driver uses the hand farthest from the door to open it. It forces your whole body to turn, so you’re naturally able to see oncoming bikers.

While staying safe on a bike can feel complicated, Corcino is optimistic about the future of biking — and bike safety.

“With more cyclists on the road, we protect ourselves,” she says. “[Drivers] see more people using an alternative mode of transportation. So they will just get used to it.”

And maybe, she says, they’ll even try it themselves.

Black activist burnout: 'You can't do this work if you're running on empty'