The map depicts HTC (Hard To Count) 2020 Census response rates, with bluer colors representing higher responses.York city has just under 50 percent self-completion rate for the 2020 Census, one of the lowest in the region. (Courtesy CUNY Mapping Service)

Counties along the Route 222 corridor report 2020 U.S. Census completion rates well above the national average, but cities in the region are trailing by significant margins.

Making up those differences will be harder now that the Trump administration has rolled back a previously announced extension tied to the coronavirus epidemic. Census officials will now have to complete their work by the end of September, a month earlier than the timetable announced in April.

Organizers of census collection efforts warn that the potential undercount of thousands of people could mean urban, Latino and immigrant communities will lose tens of millions of dollars in federal funding over the next decade.

The City of York faces one of the biggest challenges in the region.  The county self-completion rate is above 72.5 percent, but the city lags at only 49.1 percent.

Anne Walko, co-chair of the York County Complete Count Committee, said the committee’s efforts in the city have “been a little bit more concentrated and a little bit more intentional than we’ve had in the rest of the county, given the fact that we know that there are pockets of the cities that have had historically lower response rates.”

But Walko said that the pandemic created more barriers for the segment of people who are already hard to reach. Little more than a quarter of York’s population is Latino, but Latinos have been the majority of coronavirus infections cases in the city. 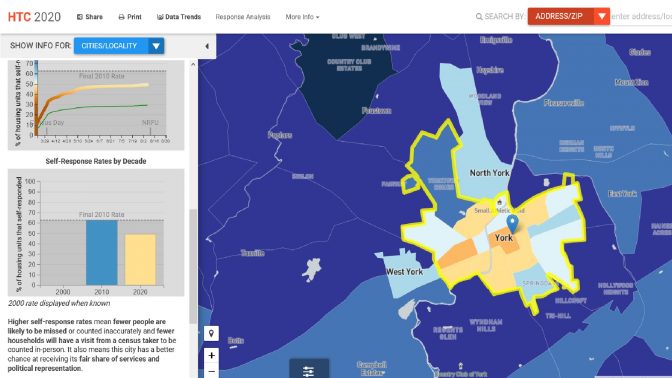 The map depicts HTC (Hard To Count) 2020 Census response rates, with bluer colors representing higher responses.York city has just under 50 percent self-completion rate for the 2020 Census, one of the lowest in the region. (Courtesy CUNY Mapping Service)

“I think in some ways that really got those who are going to fill it out to fill it out even sooner,” Walko said. “But in a lot of other ways, it just created more sort of barriers and detours to those who weren’t really ready to fill it out in the first place.”

Two critical census tracts in the city have completion  rates in the mid-30s. Those tracks are largely Latino and have a significant immigrant population, according to Census estimates.

Walko said the committee plans to do more advertising on York’s Rabbittransit buses and produce  more informational videos. One main point they are trying to get across is that Census information cannot be used by immigration or city authorities against residents.

“We need to attend to make sure that those folks understand that the census is safe, that it’s secure, that filling it out … you’re protected, your information is protected,” Walko said.

Norman Bristol-Colon, executive director of the Governor’s Census 2020 Complete Count Commission, said there has to be consistent and clear messaging when it comes to getting people to participate.

“In communities of color in places like Reading and Lancaster, Allentown, Lebanon, York, Harrisburg, Philadelphia and Pittsburgh, we need to make sure that they understand that everything that we do for the next 10 years, when it comes to federal funding and federal support to the Commonwealth, it is all connected to the U.S. Census,” he said.

Bristol-Colon said the Trump administration’s attempt to add a citizenship question to the census and the move to not count undocumented immigrants in congressional apportionment has made immigrants hesitant to participate.

Pennsylvania is already expected to lose at least one congressional seat after the census is completed, and the Trump administration’s apportionment decision would not likely result in the loss of another seat, according to the Pew Research Center. But it may have reinforced negative perceptions of the census among undocumented immigrants.

“The fear mongering coming out of Washington creates challenges for us, but that challenge is even beyond Pennsylvania,” Bristol-Colon said. “It’s a challenge for the nation, because then it goes against the same Constitution that is allowing us to do this count.”

Latino rights organization NALEO Education Fund in a Washington Post article this week called the shortened census timeline “cruel” and warned Latno communities would be negatively impacted for the next decade due to likely under-counting. 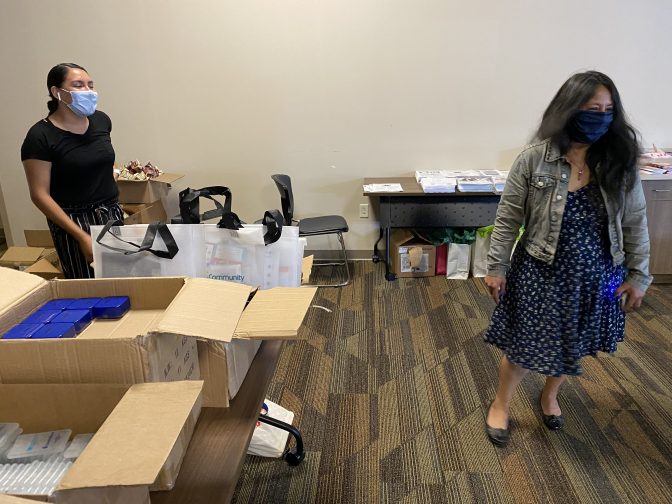 Reading over the weekend reached the 50 percent mark for Census completion. Over the past two months, Reading’s self-completion rate only moved up less than 4 percentage points from percent.

Isabel Monterrosa, Berks County Complete Count Committee’s volunteer and publicity coordinator, says response rates in some tracts of the city remain dismal, but it isn’t for lack of effort, she said.

Local leaders drove a caravan through the city on July 21 promoting participation. The Census 2020 Day caravan distributed information about the benefits of filling out the census. It ended in an event in City Park that went into the early evening.

The event resulted in 300 people being counted and 60 questionnaires being completed, Monterrosa said.

Mayor Eddie Moran and other prominent local Latinos participated. Moran said he relayed the message that going uncounted can mean the loss of thousands of federal dollars to address problems like fixing streets.

Moran also emphasized the importance of all residents, not just citizens, to complete the census.

“If we don’t do our part in getting counted, we are short changing ourselves in getting funds we’re entitled to,” Moran said over the bachata music playing in the park. “It doesn’t matter if you’re documented or undocumented or what your status is here; you can be counted and again, you are protected.”

Reading Mayor Eddie Moran speaks on the importance of everyone in Reading, undocumented immigrants included, being counted 2/ pic.twitter.com/JfDCFECkRZ

Patricia Vasquez, a member of the Complete County Committee and Reading’s community development coordinator, said people are generally too worried about paying rent, keeping their family fed and being employed to really appreciate the importance of the census.

The city currently has ads playing on local Spanish-language radio stations and an English ad on the local hip-hop station, Vasquez said.

The complete count committee set a goal of counting 500 households in the city each week, or increase response by 2 percent, every week until the end of September, according to Monterrosa.

The Reading School District will continue to assist in getting the word out to parents, and Montrerrosa said she is optimistic the schools’ participation will reach more people.

Reading School District has already sent out messages in a district mobile app, emails and texts. The district has also posted on social media about the census. Additional reminders, fliers in the district’s meal program other tactics will be used to reach parents up to the census deadline, according to the district.

Monterrosa said she believes that immigrants, who are often suspicious of the government and strangers, have been made even more hesitant to complete the census in the face of President Trump’s actions.

But there’s also a big public information gap in Latino communities, she said, relaying her observation that she  has seen on multiple occasions people respond affirmatively when asked if they have filled out the census, only to then see them ask other people around them what the census is.

In other cases, some people are hesitant to speak with strangers in general.

“You know, undocumented people are not going to want to open the doors to anybody,” Monterrosa said.

Lebanon city’s response rate of 57.4 percent, while low, is significantly better than York’s or Reading’s. Janelle Mendoff, the city’s community and economic development administrator, said she is thankful that so many community leaders and organizations worked hard to educate citizen on the census, including the Latino-focused nonprofit Juntos De Lebanon.

Mendoff, the chair of Lebanon’s complete count committee, echoed other leaders’ views that  some residents are afraid the census will get them in trouble. Some are worried they will be cited for having migrants or transient guests rooming in people’s apartments, she said.

“Even that has come up too, so that’s why we really like the city doesn’t get the information and that was something we want to really get out there and we’re not getting this,” Mendoff said. “We’re not gonna come after you if you’ve got, you know, five people living in a one bedroom apartment.”

Mendoff said she is also hoping to get confirmation that the Lebanon School District will reach out to families before the Sept. 30 census deadline.

Anthony Orozco (@AnthonyOrozco20) is a Report for America reporting fellow working at PA Post. Report for America is a national service program that places talented emerging journalists in local newsrooms to report on under-covered topics and communities.