August pick of the month: “The Brothers York: A Royal Tragedy” by Thomas Penn 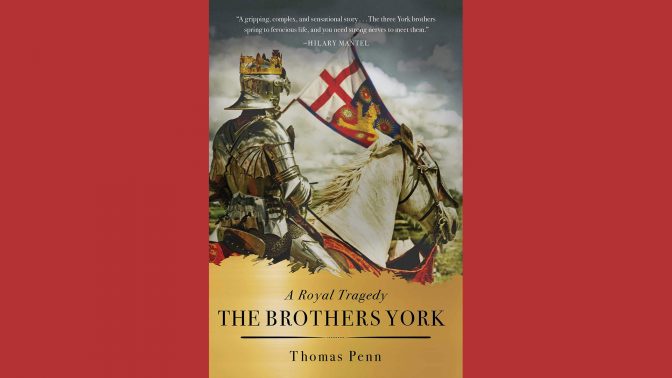 WITF is partnering with Midtown Scholar Bookstore on a Pick of the Month. Read along with us and discover books we think you’ll like. August’s pick is The Brothers York: A Royal Tragedy by Thomas Penn.

In 15th-century England, two royal families, the House of York and the House of Lancaster, fought a bitter, decades-long civil war for the English throne. As their symbols were a red rose for Lancaster and a white rose for York, the conflict became known as the Wars of the Roses.

During this time, the house of York came to dominate England. At its heart were three charismatic brothers—King Edward IV, and his two younger siblings George and Richard—who became the figureheads of a spectacular ruling dynasty. Together, they looked invincible.

But with Edward’s ascendancy the brothers began to turn on one another, unleashing a catastrophic chain of rebellion, vendetta, fratricide, usurpation, and regicide. The brutal end came at Bosworth Field in 1485, with the death of the youngest, then Richard III, at the hands of a new usurper, Henry Tudor, later Henry VII, progenitor of the Tudor line of monarchs.

Fascinating, dramatic, and filled with vivid historical detail, The Brothers York is a brilliant account of a conflict that fractured England for a generation. Riven by internal rivalries, jealousy, and infighting, the three York brothers failed to sustain their power and instead self-destructed. It is a rich and bloody tale as gripping as any historical fiction.

July pick of the month: "Option B: Facing Adversity, Building Resilience, and Finding Joy" by Sheryl Sandberg and Adam Grant