School districts go round and round on school bus reopening plans

Should students with COVID-19 symptoms be isolated at the front of the school bus?

(Harrisburg) — School districts nationwide puzzling over how to safely educate children during a pandemic have a more immediate challenge â€” getting 26 million bus-riding students there in the first place.

Few challenges are proving to be more daunting than figuring out how to maintain social distance on school buses. A wide array of strategies have emerged to reduce the health risks but nobody has found a silver bullet.

Should students with COVID-19 symptoms be isolated at the front of the school bus? Should bus seats be assigned? Should buses be loaded from the back? Should buses only carry a few students at a time?

â€śThe transportation professionals are left with the issue of, OK, youâ€™ve got little Billy at the bus stop. Momâ€™s not there and heâ€™s got a temperature. Thatâ€™s a dilemma,â€ť said Steve Simmons, a bus safety expert who used to head pupil transportation for Columbus, Ohio, public schools. â€śWe canâ€™t answer those kinds of questions. I donâ€™t think anybody can.â€ť

Simmons, president of the National Association for Pupil Transportation, was part of team of industry and school officials who produced a 70-page report on ways to lower the risk of COVID-19 transmission.

Many schools have been surveying parents to determine how many students will take the bus and how many will be privately driven to school. Others are making decisions about bus capacity that involve a trade-off between safety and affordability.

The task force report warned that a 6-foot (2-meter) social distancing regulation â€śis not financially nor operationally feasible,â€ť and that â€ścurrent thinkingâ€ť is that a 72-student capacity bus can accommodate 24 students, or more if family members sit together.

Some large districts will nonetheless â€śjam â€™em inâ€ť the school bus, Simmons said, while other districts plan to stagger school start times or teach half the students in the morning and the rest in the afternoon, with two sets of bus runs. 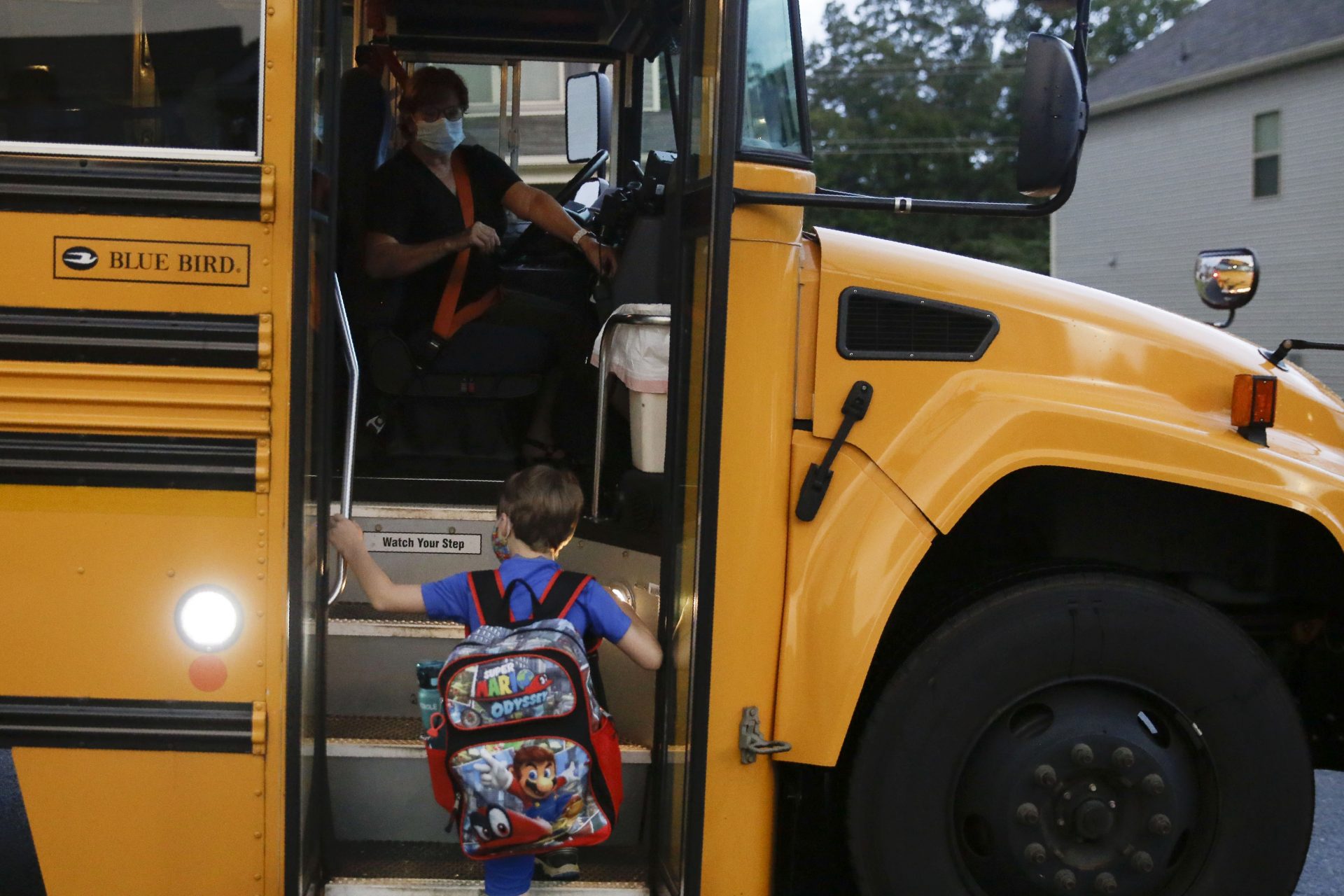 Paul Adamus, 7, climbs the stairs of a bus before the fist day of school on Monday, Aug. 3, 2020, in Dallas, Ga. Adamus is among tens of thousands of students in Georgia and across the nation who were set to resume in-person school Monday for the first time since March.

School transportation plans are â€śjust one of the many ways weâ€™re seeing inequities playing out in this pandemic,â€ť said Deborah Gordon Klehr, executive director of the Education Law Center in Philadelphia.

â€śSome districts are saying that they will cut back on the number of students offered transportation, or expect more parents to drive their students to school,â€ť she said. â€śStudents and families with fewer resources are going to be the ones hurt by this.â€ť

Kim Blodgett quit her job as a fourth-grade teacher this year in order to drive her 5-year-old son to the Oklahoma School for the Deaf, concerned the twice-daily, 45-minute bus ride from their home in Norman was too risky.

â€śSo many parents feel like they have no control over any of this thatâ€™s happened,â€ť Blodgett said. â€śThey have to work, they have to send their kids to school. They have to put their kids on that bus. Itâ€™s a horrible situation all the way around.â€ť

Simmons said most bus drivers are old enough to put them at heightened risk for severe illness if they catch the virus. They will have to decide whether to continue driving â€” a job that typically does not pay much â€” or to stay home and prioritize their own safety, which could worsen a yearslong national school bus driver shortage.

Schools will have to decide what cleaning standards they want to set and whether to add sneeze guards or similar barriers among students and between students and bus drivers.

In Pennsylvania, the Transportation DepartmentÂ shot down a proposal to installÂ plastic barriers around bus drivers, telling a school bus contractor there is not evidence it would make students or drivers safer. In New York, hand sanitizer isnâ€™t even allowed on buses â€śdue to its combustible composition and potential liability to the carrier or district,â€ť according to guidance from the stateâ€™s school reopening task force.

The task force report said a survey of bus contractors found they were unanimously opposed to taking studentsâ€™ temperatures, as some districts have considered. The contractors said drivers and bus monitors do not want to have to interpret health data, among other objections. 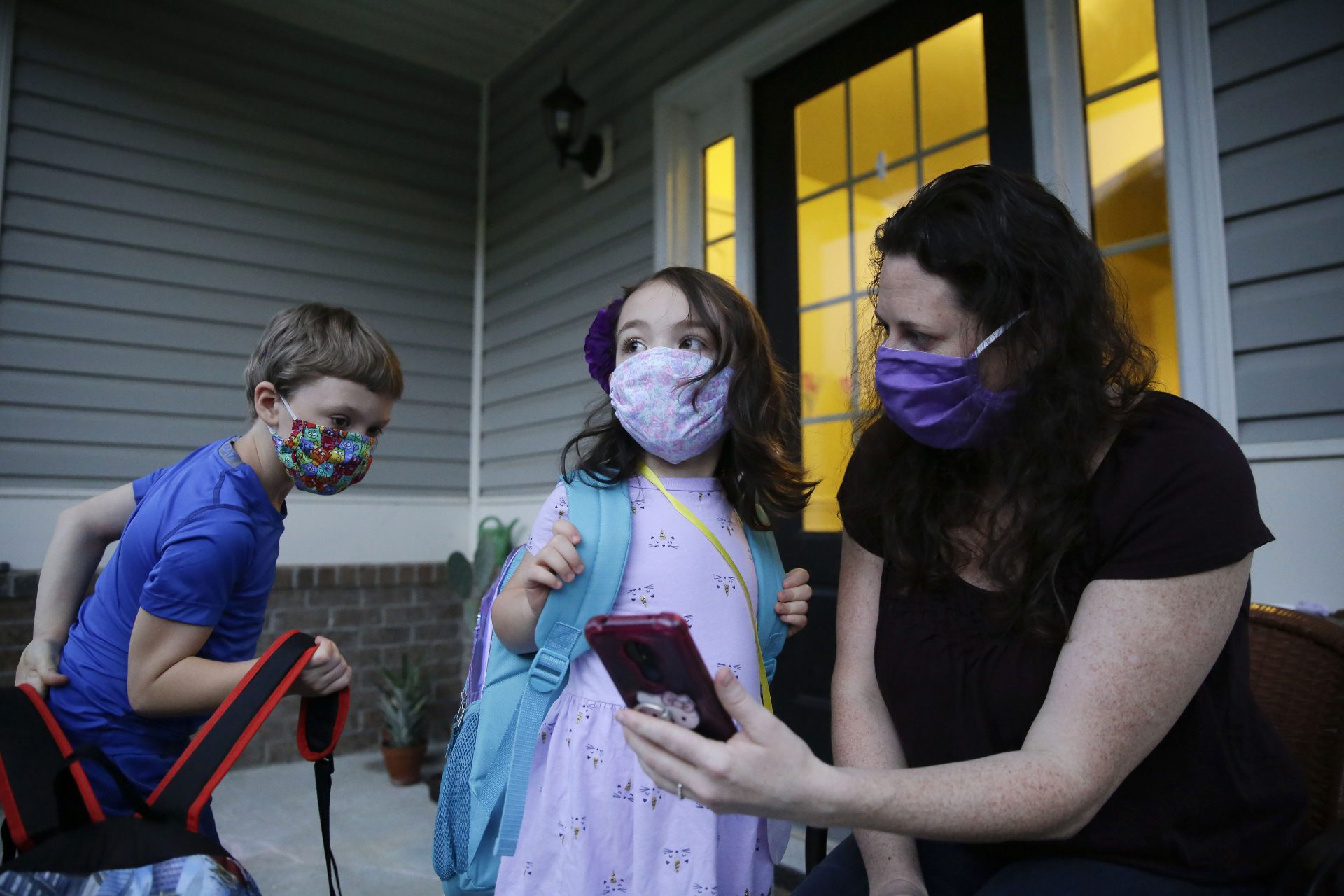 Rachel Adamus, right, shows her children, Paul, left, and Neva, 5, center, an app on her phone showing when the school bus will arrive near their home, on Monday, Aug. 3, 2020, in Dallas, Ga. The Adamus children are among tens of thousands of students in Georgia and across the nation who were set to resume in-person school Monday for the first time since March.

Getting on and off the bus is considered a time of heightened risk. Pennsylvania districts are considering assigned bus seating, making students fill empty buses from the back and emptying them from the front.

A suburban Philadelphia school district’s reopening plan states that students with symptoms should be placed in the front seat of the bus and brought to the school nurse. Another mandates that no students with symptoms will be sent on a bus or brought to school. Districts are designating rooms where sick or potentially sick children can be isolated until their parents can retrieve them.

Pottstown, Pennsylvania, schools have proposed keeping windows on its few buses open, a plan that will be difficult to carry out in winter. New York’s statewide recommendation is for windows to remain cracked if the outside temperature is at least 45 degrees Fahrenheit.

Public schools in Providence, Rhode Island, had considered making all students attend the schools that are located closest to their homes as a way to limit ridership, but officials withdrew that proposal after parents objected.

The Kentucky Education Department suggests schools institute â€śwalking school buses,” a system used in at least two other states in which adults chaperone groups of students walking to and from school together, with designated bus stops and pickup times. Kentucky Education Department spokesperson Toni Konz Tatman said there has been no word yet of any districts giving the walking school buses a try.

Bus plans are expected to be tweaked over the first weeks and months of school, but if a major outbreak is linked to bus transportation, parents will have to decide whether to vote with their feet and go another route.