In this June 23, 2020 file photo, the J.C. Nichols fountain is seen in Kansas City, Mo. Kansas City officials have voted to remove the name of influential developer J.C. Nichols from the city's most recognizable fountain because he barred Blacks and Jews from his neighborhoods. 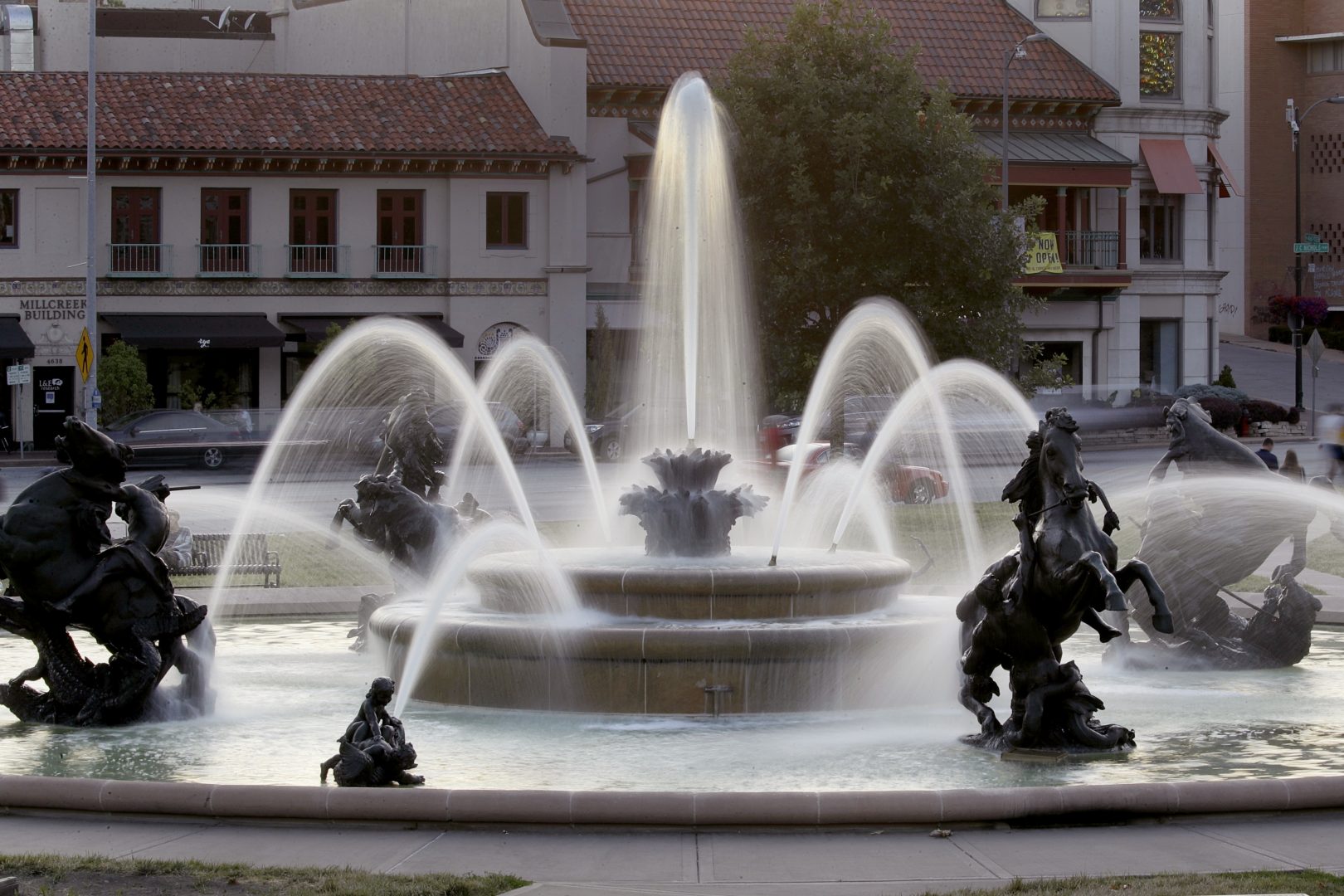 In this June 23, 2020 file photo, the J.C. Nichols fountain is seen in Kansas City, Mo. Kansas City officials have voted to remove the name of influential developer J.C. Nichols from the city's most recognizable fountain because he barred Blacks and Jews from his neighborhoods.

Nearly 100 years after J.C. (Jesse Clyde) Nichols built Kansas City’s Country Club Plaza — an outdoor shopping center modeled after Spanish architecture — his name has been stripped from one of its streets and an iconic fountain.

The debate to remove his name has long simmered, but the pressure mounted as protests over systemic racism continued after George Floyd was killed in May by Minnesota police officers. Nichols, a prominent real estate developer, promoted restrictive zoning that prohibited Blacks, Jews and other minorities from living in certain neighborhoods. For many, the segregation that persists in the city today is a reminder of his zoning policies.

At the end of June, the Parks and Recreation Board of Commissioners voted to remove the name JC Nichols after two public comment sessions on the issue.

Here are some thoughts that residents who attended the sessions shared.

In the first public comment session, Wanda Taylor said the name is a reminder that the Plaza wasn’t built for Black people. She recalled a time when she would spend weekends on the Plaza with her daughter.

“She would go back to school and her classmates, African American, would want to know why she went to a place where white people went and that Black people aren’t welcome on the Plaza,” Taylor said “I was struck by the pain associated with going there.” 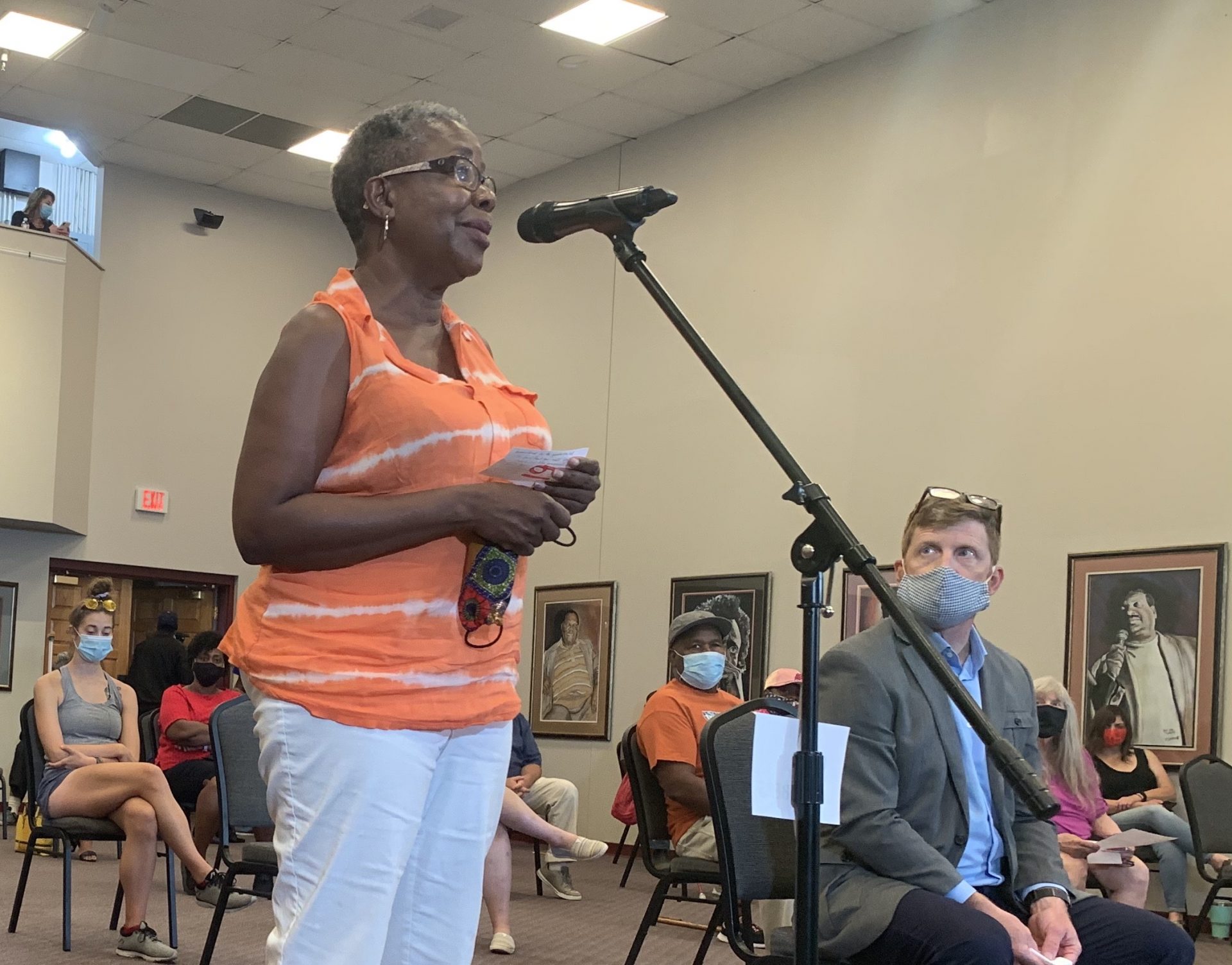 Wanda Taylor of Kansas City, speaking a public meeting in favor of changing the name of the fountain honoring J.C. Nichols, a Kansas City developer who barred Blacks and Jews from his neighborhoods.

“In the United States, we have such a habit of pointing to events and saying, ‘hey look we fixed an inequity,’” Bozarth said, “so taking away his name and renaming is a great step but it must be coupled with additional efforts.”

Kevin Woolfolk, one of the many residents who voiced support for removing Nichols’ name during the second comment session, said he’s happy to see the name change, but unlike Bozarth, he is looking backward, not forward.

“The people who are hurt the most have been dealing with this for more than 150 years, Woolfolk said, “and this is not the first time we’ve called for something like this to happen. To remove these symbols of hate whether it’s in a statue, whether it’s on a street, or in our schools.”

It is painfully clear to him that the name should have been removed long ago. Woolfolk said a man whose policies inflicted pain across the nation — Nichols founded the National Association of Real Estate Boards and his structure for suburban segregation plays out in many other communities — should not be glorified.

“He was a segregationist, a racist and an anti-Semitic. Practices, like redlining, that he supported are part of the reason I feel African-Americans are still fighting the American dichotomy today,” Woolfolk said.

Steff Hedenkamp echoed Woolfolk on the need to change the name, but she says this is merely a symbolic gesture.

“We have to do more than these sort of quick fixes or write a check,” Hedenkamp said. “We’ve got to figure out what’s happened and how it impacted these folks, how it’s impacted all of us and how we heal? How do we move forward?”

Healing was a common theme among those who supported the name change. How can changing a name help mend the wounds of racial injustice?

Those who were opposed to the name change said it wouldn’t heal anything. Some cited the failed renaming of The Paseo to Martin Luther King Jr. Blvd. last year, acknowledging the divide and contention it caused within the community.

Others, like Tim O’Mara, said the action erases an important part of Kansas City’s history, one Nichols helped write.

“He had his flaws. The only perfect man was Jesus Christ and he is not Jesus at that,” O’Mara said at the first public comment session. “He was a pioneer of Kansas City whose contributions should be remembered.”

Hedenkamp said those concerned with erasing history are off base.

Now that the Parks board has moved to change the name, a replacement has to be chosen. While Kansas Citians will need to wait for the new name— renaming is not on the agenda for the upcoming board meeting — suggestions are already flooding in. Names like Mill Creek Parkway and Vietnam Veterans Drive for the street and Unity for the fountain.

“They say the American dream is homeownership. He [Nichols] kept people like me outside of homeownership,” Taylor said. “So let other young Black people dream.”

For this story, Noah went to several public comment sessions and spoke additionally with Kansas Citians about their personal experiences and associations with the name JC Nichols. Noah reported on this story to show how Kansas City is engaging in nationwide calls to remove monuments to the Confederacy and other racist figures from streets, fountains and statues.

I attended the first and second comment session, where speakers only had 90 seconds to voice their thoughts. The people who stood out to me most offered personal experiences or insights that showed thought and care to the subjects; those are the people I got contact information for and spoke to or used audio for this story. All of the people who I interviewed were excited to engage in this conversation and have the opportunity to expand upon their thoughts.

How open people were to speaking about this and how passionate they were about this man’s name. There is a lot to be said about symbolic gestures, but in this instance at least it carries a lot of weight.

Why President Trump's tweet about delaying election is just noise