Vice President Mike Pence waves after he spoke at a "Cops for Trump" campaign event at the police station, Thursday, July 30, 2020, in Greensburg, Pa. 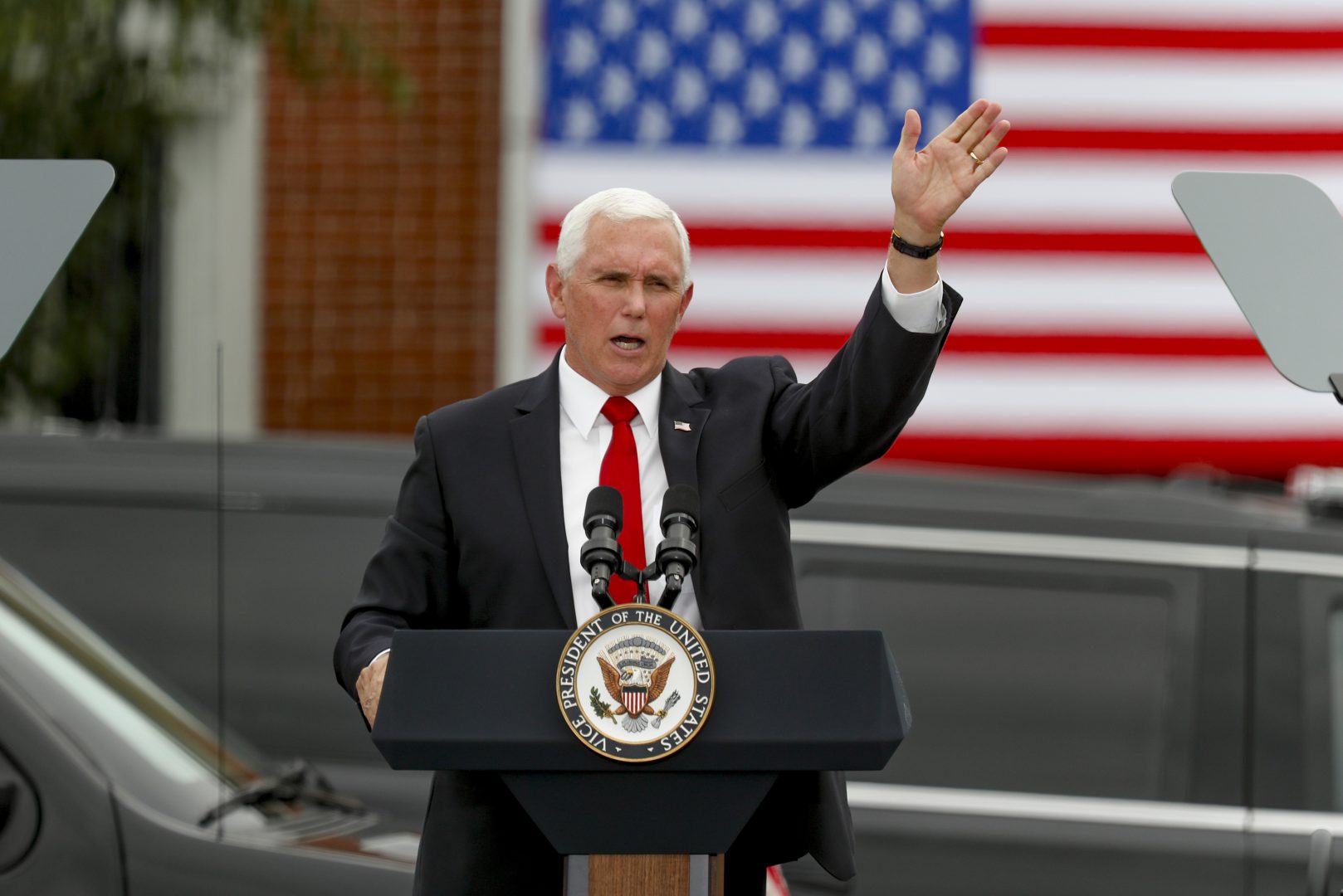 Vice President Mike Pence waves after he spoke at a "Cops for Trump" campaign event at the police station, Thursday, July 30, 2020, in Greensburg, Pa.

Vice President Mike Pence made a campaign stop outside the Greensburg Police station in Westmoreland County Thursday, to stand with law enforcement and denounce those who are calling to defund police departments.

“Law enforcement isn’t the problem, law enforcement is the solution,” Pence said. “That’s why President Trump and our entire administration back the blue just like all of you, and we’ll stand with the men and women on the thin blue line every single day. Security is the foundation of our prosperity.”

Pence addressed the crowd of supporters outside, nearly all of whom weren’t wearing masks or social distancing. This was Pence’s second Pennsylvania stop this month promoting the role of law enforcement, set against a backdrop of the dramatic uptick of coronavirus infections across much of the U.S. and protests against police brutality.

The crowd cheered when Pence reminded attendees of the president’s decision to send in the National Guard to remove protesters outside the White House in early June, and the administration’s controversial move to bring in federal agents to Portland, Oregon.

“We’re not going to defund the police — not now, not ever,” Pence said. “We’re going to back the blue with more resources and more support.”

Pence mostly focused on security and police, despite his role leading the White House’s response to the coronavirus, which he only addressed briefly.

“Our hearts grieve with the more than 150,000 families that have lost loved ones,” he said. “As we continue to marshal a whole-of-America response to the pandemic, we all have to do our part. But in these challenging times, none have done more to save American lives than our heroic health care workers, first responders and men and women in law enforcement.”

Ahead of Thursday’s visit, state Democrats denounced the campaign’s decision to focus on law enforcement amid an unprecedented pandemic that has claimed more than 7,000 Pennsylvanians lives.

“We don’t need a two-hour visit from Mike Pence for a photo opp,” said chair of the Westmoreland County Democratic Committee Tara Yokopenic. “As the head of the White House’s coronavirus task force, the vice president ought to be working on how to deliver on a national testing strategy … We need real support.”

Yokopenic said that Westmoreland residents and small businesses lack the confidence to reopen safely as health guidelines change to try to control the spread of the virus.

“We want life to get back to normal, but we can’t ignore the crisis for political purposes,” she said. “Anyone who says this virus is under control is simply not paying attention.”

With less than 100 days until Election Day on November 3, both presidential campaigns are paying close attention to Pennsylvania, which Donald Trump won by just over 44,000 votes in 2016. Earlier this month, Pence and former Vice President Joe Biden made stops in the Northeastern part of the state, where they promoted diverging messages to voters.

Pence held a rally with the Fraternal Order of Police union in Philadelphia while Biden talked up his multi-billion dollar economic recovery proposal near Scranton, which he reiterated again on Thursday.

“Mike Pence and the Trump Administration’s complete mismanagement of the coronavirus pandemic has not only wreaked havoc on the Pennsylvania economy, it has led to over 100,000 Pennsylvanians contracting the virus,” Biden said in a statement. “[It] has undermined the health and economic security of countless families. Pennsylvania doesn’t need more broken promises from Trump’s enablers. It needs a president who will provide the leadership and trust that they deserve.”

A recent Monmouth poll showed Biden with a 13-point lead over President Trump among registered voters in Pennsylvania, with an especially strong advantage in swing counties like Erie. That poll also found that voters were surprised when Trump won the state in 2016 and suspect that Trump’s support is stronger than it appears in polls. Polls also predicted Hillary Clinton would win the state four years ago.