Sunrise Movement protesters used a projector to display statements of immigrant families being held in the Berks County Residential Center. The statements described the emotional cost of family detention and reported the center’s failure to take precautions against the spread of coronavirus.

“The governor has offered a lot of impassioned statements over the years … but the facility is still open,” said Troy Turner, a coordinator with Sunrise Berks. “Words are kind of meaningless unless there’s meaningful action behind them.”

Wolf has said that he lacks the power to stop ICE from using the Berks facility. But Turner said his group believes Wolf can issue an emergency removal order to release detainees during the coronavirus pandemic. 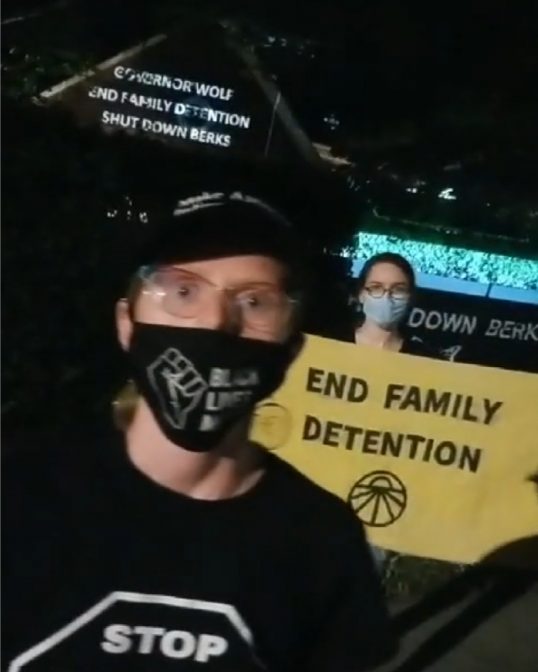 A protestor addresses the camera on a live stream broadcasted on the national Sunrise Movement’s Instagram page.

“This is kind of our last resort,” Turner said of Wednesday night’s action. “It’s ridiculous that families, our neighbors here in Berks, that are locked up during a pandemic fearing for their lives and that [Wolf] should be able to sleep soundly every night.”

“Those are things we don’t want existing side-by-side,” Turner said.

The quotes projected on the home were pulled from sworn statements of families detained in the center. The statements appear in an April lawsuit filed by the nonprofit organizations Free Migration Project in Philadelphia and ALDEA- The People’s Justice Center in Reading. The two nonprofits sued the Pennsylvania Department of Human Services in the state supreme court, arguing the state failed to make emergency removals to protect families from the coronavirus. The case was refiled in Commonwealth Court and the judge sided with DHS earlier this month.

The protests are part of a #WideAwake strategy that takes public grievances to the homes of elected officials during the evening.

“Inside the facility, no one wears gloves or masks. We never had any meeting with any of the staff explaining what the situation regarding COVID-19 is, we only learn what is going on from the TV news. On the TV there seems to be a lot of panic and concern, great steps being taken, but not here in the facility.”

“The only time that we are given gloves are the gloves we receive when we are cleaning the facility. The staff does not wear gloves or masks. They only wear gloves when we are being served food.”

“We are still all together in this one building. We are scared all of the time. No person in this facility speaks our language.“

The protest was held at Wolf’s official, albeit ceremonial, residence and it is unclear if Wolf was in the Harrisburg mansion at the time of the protests. Wolf still maintains a private residence in Mt. Wolf.

Turner said he and other protestors attempted to protest at Wolf’s York County home, but they were deterred by security before they were able to set up their projector. Northeastern Regional Police Department Chief Bryan Rizzo said his department received notice of suspicious vehicles around Wolf’s home Wednesday evening but heard nothing in regards to protests in the neighborhood.

“Governor Wolf has been clear and consistent in opposing the facility’s use for family detention. He will continue to work with the county to explore all possible options and is ready to continue discussions if the commissioners are willing,” Kensinger said. “Since the county directly contracts with ICE, it is ultimately up to them if they want to continue to detain families in this facility during a pandemic.”

Kensinger said the state has offered options for repurposing the facility in a way that will retain jobs, are sustainable and could serve needs in the community.

Those options include A 16-bed program for individuals stepping down from a forensic unit of a state hospital, a 16-bed program for adolescents with co-occurring mental health and substance use disorders and an agriculture workforce training center.

The Wolf administration is open to other suggestions but the county has never provided any input, according to Kensinger.

Earlier this month, a Wolf administration official said the state moved to pull the center’s state license to house children, but conceded that only the federal government has the power to close the center. Even if the state issues an emergency removal order, detainees would still likely remain in U.S. Immigration and Customs Enforcement custody, the official said.

Wolf last month publicly stated support for a federal judge’s order to release children from the center due to threats of coronavirus within ICE detention centers.

The protest at Wolf’s official residence echoed protests outside of the homes of Berks County Commissioners Michael Rivera in June and Kevin S. Barnhardt earlier this month.

Coalition members and other activists held a 12-hour protest outside the center located in Bern Township July 17. The day-long protest was held on the original release date for detained children as ordered by Judge Dolly Gee of the Central District of California. Gee recently said her order is unenforceable.

A 12-hour-long protest at the Berks County Residential Center begins with a “honk-in.” Heavy police presence on site Protesters are calling’s for the release of asylum-seeking immigrants families detained in Berks and Texas @PaPostNews @witfnews pic.twitter.com/2HXMhfVI1H

Berks County sheriff’s deputies arrested six protesters July 8 for blocking a driveway into the Berks County Services building in Reading as the activists called for commissioners to end the county’s contract with ICE.

Berks County holds a contract with ICE to lease out the county-owned building and received around $1.3 million from the agency, according to county officials. Barnhardt is the only one of Berks County’s three commissioners to publicly oppose the detention of families in the center.

ICE officials Monday did not reveal how many immigrants are currently detained in the Berks center or if families are being released as ordered. ICE officials reported there were 21 families in the center last week.

In Gee’s order, she said that ICE detention centers were “on fire” with cases of coronavirus and ordered the release of children for their safety.

ICE reports 941 cases of detainees and 15 cases among detention center employees. ICE officials maintain that the agency is proactive in protecting detainees from the virus.

“Expanded testing has been conducted for all residents at the [family residential centers] and all incoming residents are tested for the virus,” ICE officials said. “ICE uses the CDC recommended guidelines for isolation for any resident that tests positive or has signs or symptoms of the virus.”

All staff follow the CDC guidelines for self-monitoring and staff temperatures are taken prior to the start of any shift. ICE continuously screens all residents for medical issues that may put them at higher risk for contracting COVID-19, according to ICE.