Pa. business owners to Wolf: Please police mask requirement so we don’t have to

David Evasew is not taking the threat of the pandemic lightly.

The owner of Upper Merion Dance and Gymnastics Center in King of Prussia spends over an hour each night reading the latest reporting and guidance on the coronavirus, and has reduced the number of kids in his buildings each week by nearly 90% to maintain social distancing.

But he’s had a harder time with what is arguably the most important coronavirus prevention measure: mask-wearing. Pennsylvania Health Secretary Dr. Rachel Levine ordered people to wear masks inside businesses back in April, but left it up to business owners to enforce it.

Evasew said many of his customers are reluctant to wear masks, and he hesitates to confront them over it.

“Right now, we are hurting for money,” said Evasew, who reopened his gym in June. “If we did something as a business, the person would just up and leave and go somewhere else, because someone else is not going to enforce it.”

If customers leave, Evasew said that would put him in a tougher financial situation.

“There needs to be some force behind [the rule] to make them understand how important it is.”

Pat Burns, who owns seven supermarkets in the Philadelphia area, said his employees have been struggling to enforce the mask rule as the weather has turned steamier.

“We have had customers yell and scream at management and security,” Burns said. “We kind of have to back off because we don’t want to have an incident.”

As more of Pennsylvania’s economy reopens and COVID-19 cases trend up, business owners are struggling to impose the mask mandate on their own. They’re calling on state officials to step in and enforce its own rules.

“From the very beginning there have been issues with this,” said Gene Barr, president and CEO of the Pennsylvania Chamber of Business and Industry. “But I think we are seeing increasing frustration [from business owners] as people are getting frustrated and saying, ‘I don’t want to wear a mask anymore.’” 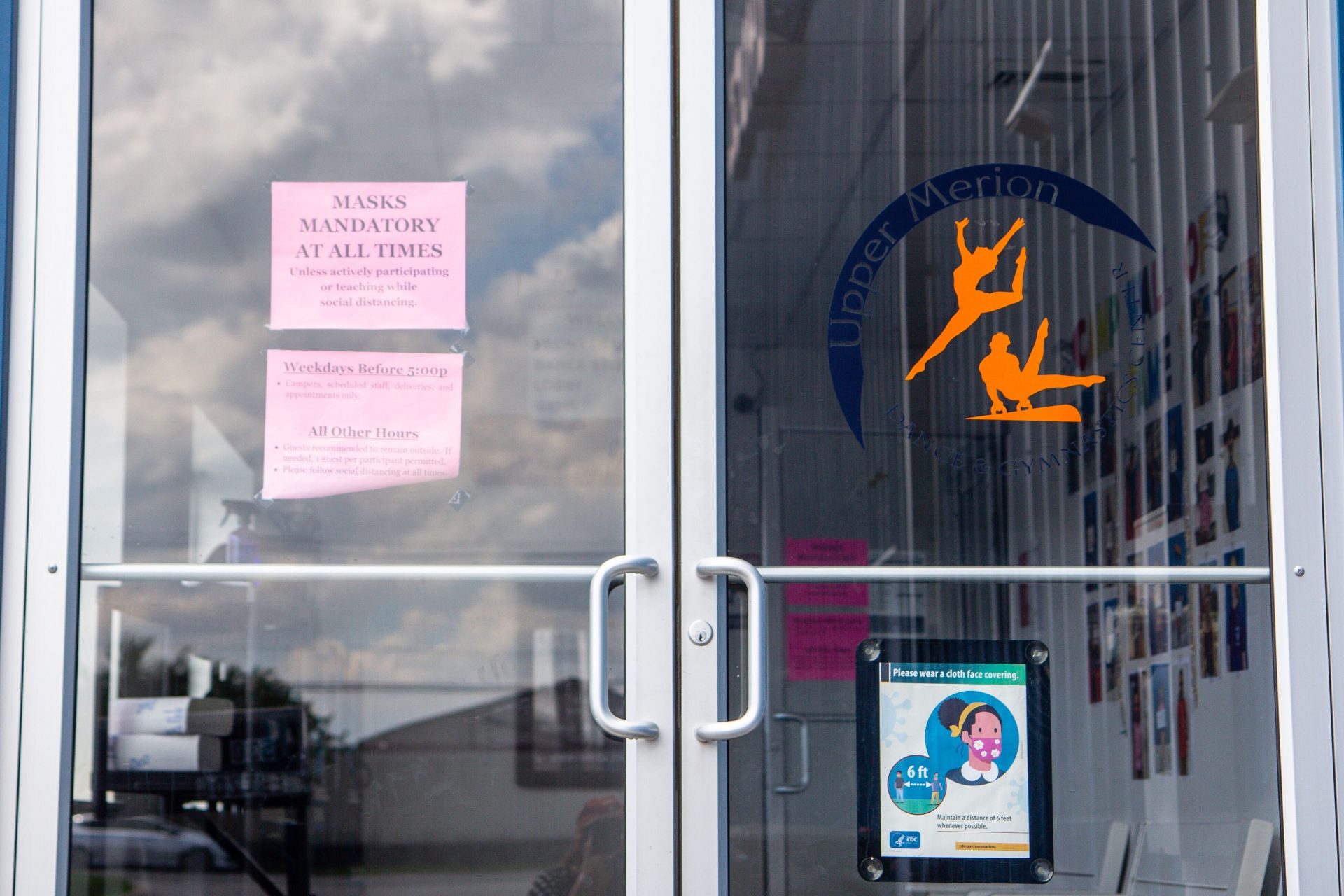 Signs at the Upper Merion Dance and Gymnastics Center call for cloth masks to be worn when in the building.

‘Retailers are not designed to be police officers’

Technically, anyone who breaks Pennsylvania’s mask requirement could receive up to a $300 fine, and up to 30 days in jail.

However, state officials have made it clear that they would not enforce the rule against individuals, relying instead on people’s good faith and safety to comply.

“Does everyone stop at a stop sign? Most people do. Is there a police officer at that stop sign? Mostly not,” Pennsylvania Gov. Tom Wolf said at a June 29 press briefing. “They do it because it is in their self-interest.”

But while a scofflaw motorist faces the threat of an occasional ticket, people flouting the mask rule can do so with impunity — something Alex Baloga, president and CEO of the Pennsylvania Food Merchants Association, said makes it more difficult for business owners to enforce the rule.

“Retailers are not designed to be police officers,” Baloga said. “Not having that … enforcement aspect of it coming from an official entity I think makes it more difficult.”

Officials have also taken a relatively light touch in enforcing the mask requirement with business owners.

The Pennsylvania State Police hasn’t issued a single citation to a business owner for violating the state’s business safety order since it went into effect in April. Philadelphia’s Department of Health has only issued seven “cease operation” orders out of more than 4,000 inspections.

Barr said business owners would have an easier time enforcing the mask rule if state officials made it clear that individuals who break it could face a penalty.

“It should say, ‘Masks required, failure to do so could result in fines,’” Barr said.

Syon Bhanot, a professor of behavioral economics at Swarthmore College, said the threat of a fine alone would not be likely to convince reluctant mask-wearers to change their ways. He suggested the state create a system for business owners to report people who refuse to wear masks, followed by some kind of penalty for noncompliance, and publish when it is enforced.

“The more we can take the onus off the store owner the better,” Bhanot said. “Politicians not wanting to anger everyone and wanting to please everybody, to some extent, get us to this position … You need to back up [the rules] with something.

Tess Wilkinson-Ryan, a professor of law and psychology at the University of Pennsylvania, said she thinks fines would help with compliance, but worries they would disproportionately impact communities of color that are being hit hardest by COVID-19.

“I’d be worried about the potential for discretionary enforcement that targets vulnerable or marginalized or over-policed communities,” Wilkinson-Ryan said.

When exceptions are the rule

The mask rule does not apply to everyone: Children under age 2, people unable to remove a mask without assistance, people who are hard of hearing and people who cannot wear a mask due to a medical condition are exempt.

People who claim a medical condition are not required to present any proof, something David Evasew said his students and staff seem to be well aware of.

“A lot of participants were coming in without their masks and they were saying, ‘Oh, I have asthma’ or ‘Oh, I have a breathing condition,’” Evasew said. “These are people that have been with us for several years that have never had an asthma attack.”

Some western Pennsylvania businesses have actually been sued for enforcing the mask mandate with customers who claim they have a medical exemption. Attorney Thomas Anderson has filed dozens of federal Americans with Disabilities Act lawsuits against the grocery store chain Giant Eagle and Palace Entertainment, which owns a number of amusement parks in the area, claiming that those businesses violated his clients’ rights by forcing them to wear a mask.

“As soon as he walked in the door, Plaintiff was stopped by an armed guard who asked why Plaintiff wasn’t wearing a mask. Plaintiff responded that he cannot wear a mask because of his anxiety and allergies,” reads one of the lawsuits. “The manager finally appeared and told Plaintiff, ‘Too bad, so sad, you cannot enter the store without a mask.’” 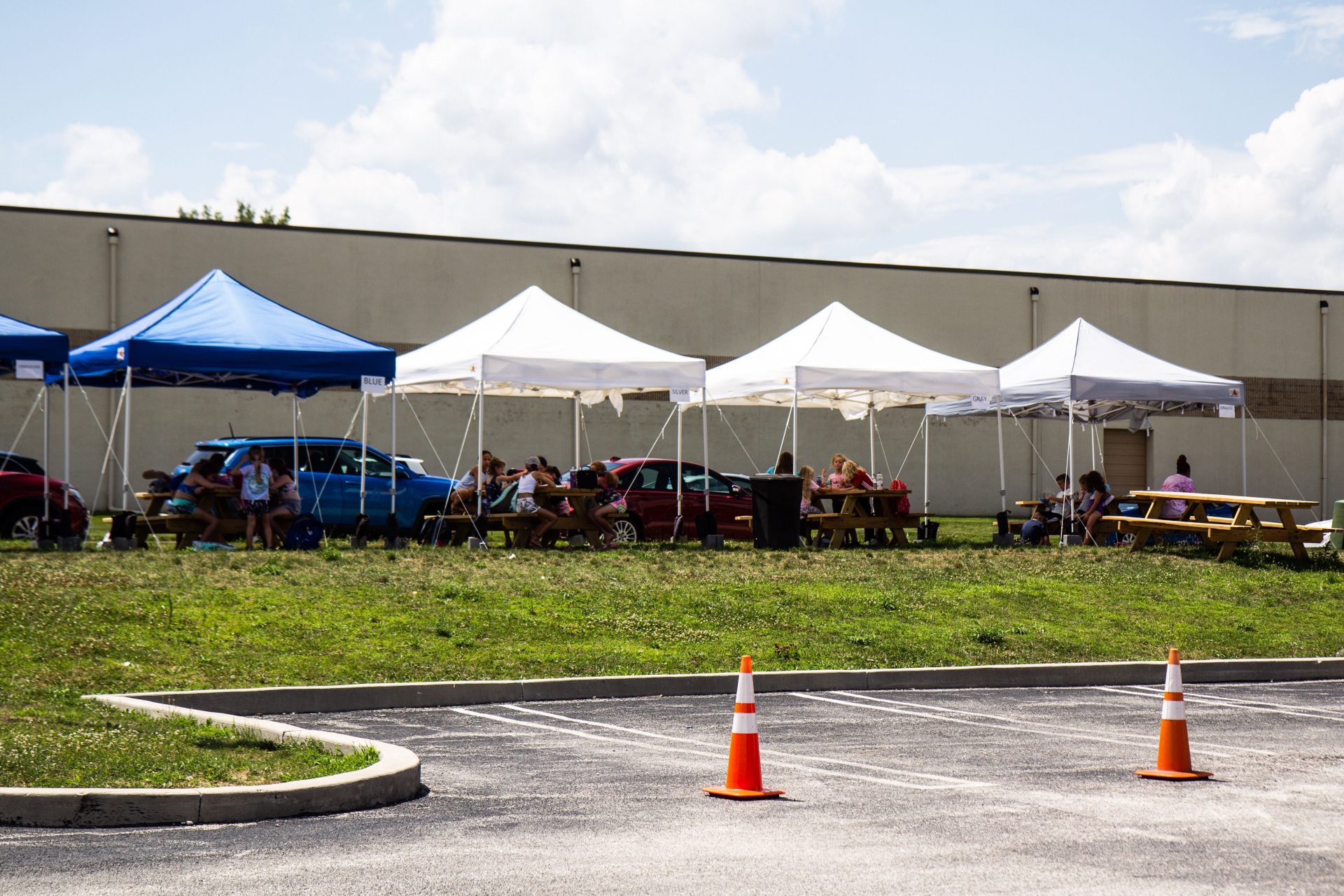 Campers at the Upper Merion Dance and Gymnastics Center eat outside at picnic tables.

Evasew said he’s lost about 5% of his gymnastic center’s customers since reopening because they do not want to comply with the mask rule. Two even disputed the center’s charges on their credit card bills.

But, Evasew said, other parents of kids who attend the center are now pressing him to more aggressively enforce the mask rule — and threatening to leave if he doesn’t.

“No matter what I do, I am going to be wrong and I am going to get customers mad at me,” Evasew said. “At this point, it’s like what are we supposed to do? Unless there is government enforcement, I can’t do anything.”

On Tuesday afternoon, Evasew’s worst fears about the lack of mask wearing came true: a young person who goes to his gym had tested positive for COVID-19.