A man dressed in all black wore a tactical vest and carried an AR-15-style rifle and a handgun as he watched over protest in Wyomissing Wednesday. (Photo by Anthony Orozco/PA Post)

Activists come armed to protests in a mansion-lined neighborhood in Berks County. 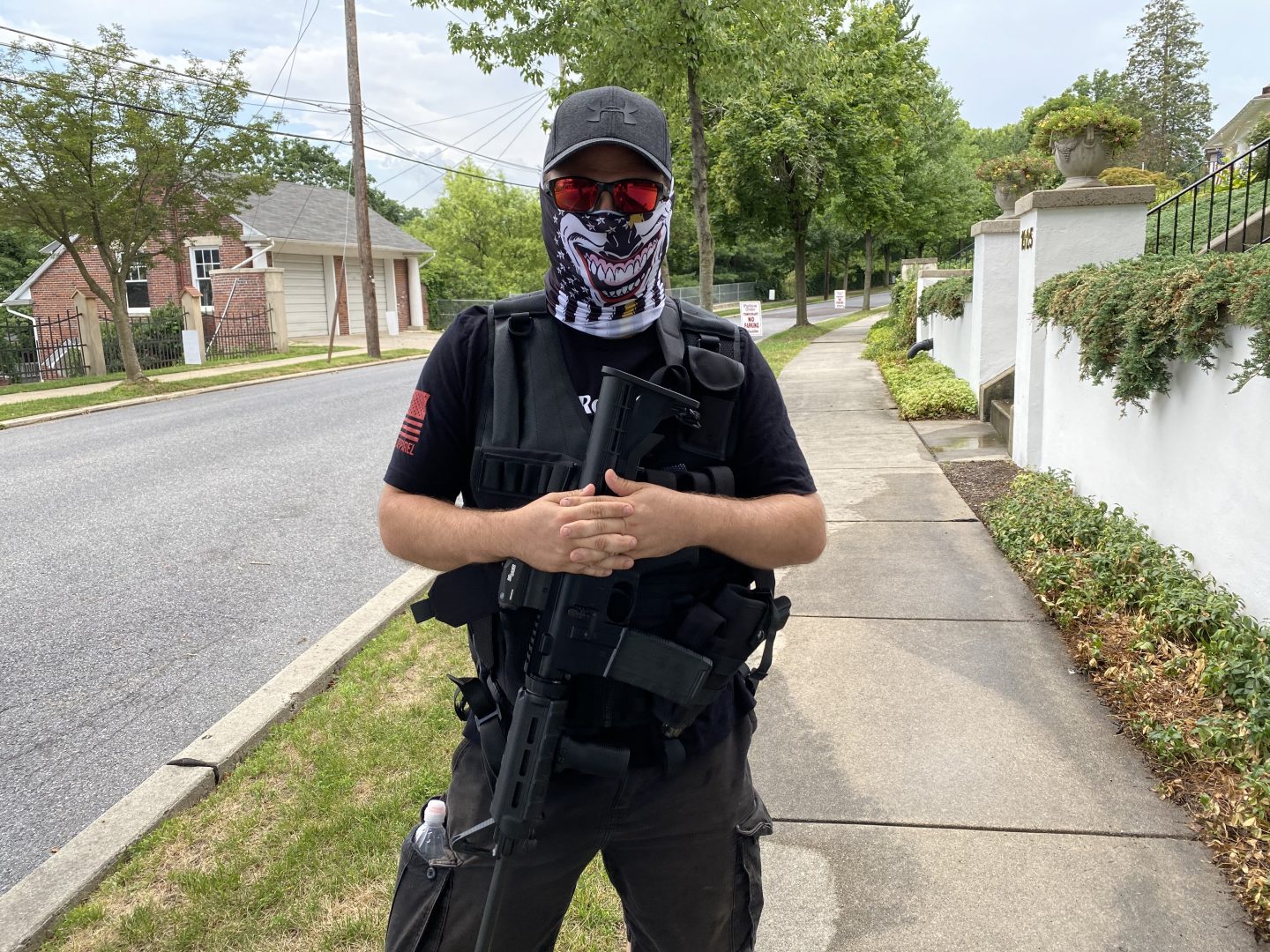 A man dressed in all black wore a tactical vest and carried an AR-15-style rifle and a handgun as he watched over protest in Wyomissing Wednesday. (Photo by Anthony Orozco/PA Post)

A tightly packed group of protestors gathered last Wednesday at the gate guarding the spacious and well-manicured lawn surrounding the Wyomissing Borough Hall. Calls to defund the police filled the air.

Across the street a man wearing camouflage fatigues, a helmet, knee pads and a tactical vest clutched his semiautomatic rifle as he watched. A group of police officers stood nearby, unconcerned by the armed man’s presence. At the other end of the block, a different man dressed in black was standing; he carried an AR-15 on his chest and a .45 caliber pistol on his thigh. 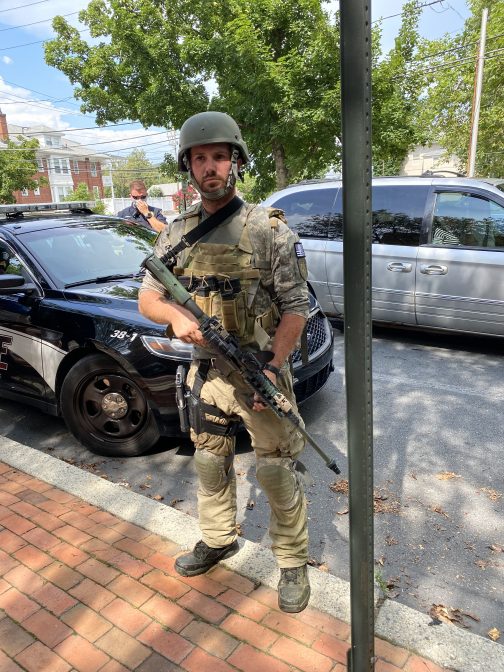 The armed men watched as activist Shakair McCain grabbed the microphone at the center of the protests and voiced her frustration. Once again, she said, she was forced by events to come to the defense of Black man forcefully detained by the state. This was a reference to Stanley Gracius, whose arrest inside a Wyomissing Walmart on July 20 was captured on video and shared widely online.

“Being Black in America is getting harder and harder everyday because we look like we are playing a race card but at the end of the day, we’re not going to just sit back and be treated like this anymore,” McCain said. A close look wasn’t required to see the holstered handgun jutting out of the waistline of her shorts.

The scene last week in Wyomissing was an example of how fear — fear of Black Lives Matter protesters and Antifa, fear of an authoritarian police state, fear of neighbors who may sympathize with the “other” — has driven Americans to arm themselves.

The man in camo, one of the few people not wearing a mask, did not want to identify himself. His fatigues featured a stylized American Flag patch on his shoulder. Instead of the traditional Old Glory, this flag was black and white, emblazoned with a “Punisher” skull logo.

“Punisher” is a comic book character. His backstory is that he’s a veteran (and in some versions, a former police officer) turned ultraviolent vigilante who skillfully dispatches criminals. The Marvel character, unlike other comic book heroes, takes no mercy on his targets.

The man in camo reluctantly shared that he is affiliated with a state militia.

Down the street, the armed man dressed in black identified himself only as a Wyomissing resident. He said he was there to protect the borough if the protests became violent.

“Left, right-wing, I don’t care, everybody’s human, everybody has their right to whatever,” he said through a mask decorated with a black and white American flag and ghoulish grin. “But to do this and to bash the police department and say defund the police like everybody wants to in my opinion is a bad idea because if something happens to you and you call 911, they’re not going to show up. What’s going to happen?”

2/ Wyomissing resident armed with an AR and 45 attends protests to keep the peace pic.twitter.com/PBhTlLxgDg

The man said he was not part of law enforcement but part of another group he declined to name. He also said he believed police had done the right thing in arresting Gracius.

The arrest of Gracius prompted the protests outside the borough hall, which continued the next day when about 40 people gathered outside the Walmart where the incident happened.

McCain also showed up to the Thursday protest with her handgun, saying fears for her safety and the presence of militia and other armed residents have not made her feel any safer.

“I feel like they want to intimidate us so bad they would go to those lengths and police probably wouldn’t even do anything if he tried to come over and have a say in what he would do to us and not do to us,” McCain said. “That’s the thing, we do not take threats lightly, we’re not supposed to; that’s why I’m armed.”

Referring to the two armed men who stood on the sidelines of Wednesday’s protest, McCain said she is not going to be intimidated.

“He was armed, he basically said, to protect Wyomissing like we were going around Wyomissing destroying things and stealing things … As you can see we’re peaceful, we still want to be peaceful,” McCain said. “We’re not going to come out of our element unless provoked.”

McCain’s fiance, Jordan Bridges, was also carrying a handgun and shared similar views about the presence of the armed resident and the self-described militia member on the fringes of protests like the one against Gracius’s arrest.

“I feel like the people that do that are against Black Lives Matter, they do that so if something goes wrong they feel like, ‘I got the right so, I can go shoot [protesters] or harm them or intimidate them,’” he said.

Wyomissing Police Chief Jeffrey R. Biehl did not respond to requests for comment about how armed residents and protestors complicate policing in his community.

Berks District Attorney John T. Adams said law enforcement recognizes and respects the rights of Pennsylvanians to openly carry firearms, though it may cause concern among neighbors and draw extra attention from officers.

“As long as that person is an individual who may legally possess a firearm it is legal to open carry,” Adams said. “In any situation when there are firearms present of course, i think Law enforcement uses extraordinary caution as they should and firmly believe they should and I firmly believe they will be very observant of an individual who possesses a firearm … in a situation like a protest.”

McCain said she hopes more activists and protesters arm themselves as the country boils with racial and political tensions.

“People have this thing, they think minorities aren’t supposed to carry concealed, they’re not supposed to do that because they automatically think we’re criminals,” McCain said. “They don’t see anything wrong with Caucasian people carrying weapons to intimidate but they see something wrong with us carrying weapons to protect ourselves because we are now being threatened and our lives are being threatened.”

800-plus new cases in Pennsylvania as Phillies game canceled