A 12 hour protest was held in front of the Berks County Residential Center July 17, calling for the release of immigrant families detained inside.

Lawyers in Reading motion to kick well-known immigration attorney off the case, saying he pursued a compromise with ICE that reinforced family separation.

Immigration activists in Pennsylvania working for the release of undocumented families from federal detention are at odds with a key ally over a proposed legal compromise that would allow undocumented children to stay in the country.

ALDEA — The People’s Justice Center, a Reading-based nonprofit, joined with other immigration lawyers in a motion in federal court to remove an attorney from the long-running legal case that sets standards for the care of families held in U.S. Immigration and Customs Enforcement (ICE) detention pending the outcome of their asylum claims.

The activist groups are specifically targeting Peter Schey, a well-known figure in immigration law who helped negotiate the 1997 Flores Agreement and remains one of the lead attorneys negotiating with the federal government over the fate of detained families.

Earlier this week, the Trump administration was reported to be nearing a compromise deal with Schey and other lawyers that would give a choice to parents whose children are with them in family detention: Either be deported with their children, or agree to leave their children with family members legally in the United States or in foster care.

ALDEA lawyers and Schey did not respond to multiple requests for comment from PA Post over the past two weeks. But other groups question why Schey is negotiating with ICE when a federal judge in California, U.S. District Judge Dolly M. Gee, has already ordered the agency to release all children in detention, including ones being held at the Berks Family Residential Center in Bern Township.

“For those of us who are involved with this, in any respect, we are wondering why is Peter Schey agreeing with ICE to frustrate the order of Judge Gee to release the Children,” said David Bennion, the executive director of the Free Migration Project, a Philadelphia nonprofit that works closely with ALDEA and other similar groups. “I haven’t found a good answer for that but it seems he is acting against the interest of the families and the children.” 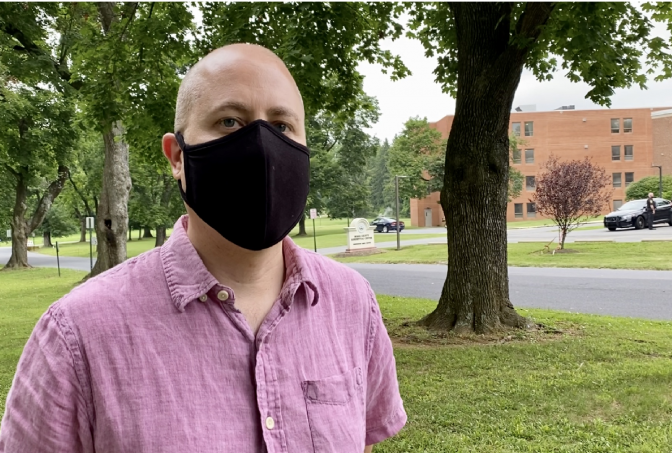 Sundrop Carter, executive director of the Pennsylvania Immigrant and Citizenship Coalition (PICC), is not involved in the Flores litigation. But Carter said she understands the tendency for lawyers to become so focused on an individual client or family that they lose sight of larger issues.

“Some of the tension of the Flores case is an outgrowth of this zealous advocacy for clients that can be at odds with what protects our community,” Carter said.

There are currently 21 residents in the Berks County center, up from 13 last month, ICE officials said Thursday. ICE declined to comment on whether the agency will meet the July 27 deadline set by Judge Gee to release children. An ICE spokesperson said the agency could not comment on ongoing litigation.

A 12-hour-long protest at the Berks County Residential Center begins with a “honk-in.” Heavy police presence on site Protesters are calling’s for the release of asylum-seeking immigrants families detained in Berks and Texas @PaPostNews @witfnews pic.twitter.com/2HXMhfVI1H

On Wednesday, the request to remove Schey from the case faced opposition from lawyers representing the federal government, who said the intervention was not timely and could threaten the larger Flores Agreement.

“[ALDEA and allied lawyers] argue that members of the class have a conflict with the named class members and class counsel as to the remedies  provided by the settlement agreement,” The government’s response read. “In such a case, the solution is not to add additional counsel  as [ALDEA and allied lawyers] suggest, but rather the proper remedy is to decertify the class and terminate the Agreement.”

As the battle continues in the courts, activists are waiting to see what will happen on the ground. Carter said she does not expect ICE to comply with the Monday deadline to release children.

“The court orders are important and what the judges say is important and also those judges don’t have an enforcement mechanism to make ICE do anything,” Carter said. “The only repercussion or consequence is more legal action. There’s not a punitive action that Judge Gee can take; it’s not like you can throw ICE in jail for violating the court order or fine ICE for not following the court order.”

Carter said that the battle is not only being fought in the courts but in the streets and the Shut Down Berks Coalition will continue to call for the national end of family detention and for Gov. Tom Wolf to move to close the Berks center.