For the past four months, Jeremy Marsac has followed all the guidelines needed to navigate Pennsylvania’s unemployment compensation system but still waiting to receive his funds.

8 percent of claims needed to be reviewed manually

For the past four months, Jeremy Marsac has followed all the guidelines needed to navigate Pennsylvania’s unemployment compensation system.

He was hopeful about a month ago when he got his pin number, but then things got tangled up when he learned he had to redirect the funds from direct deposit to a state-issued debit card. Marsac, who is self-employed, at one point had to restart the process under specific criteria.

Once again, he followed all the instructions, but eventually got radio silence. He’s been struggling ever since. He has gotten no answers; no help, no funds.

Essentially, since the statewide shutdown in March, Marsac, who owns JmJ Property Services in Easton, has been struggling to clear one hurdle after another to collect his due assistance from the state’s unemployment insurance system.

“I’m very disappointed,” said Marsac, a single father who had been making his living hauling trash and furniture, chopping trees and emptying houses. “It’s broadcast like a lie. I don’t think Labor & Industry has been up to par.”

Marsac is referring to the assessment out of the Department of Labor & Industry claiming that the vast majority of eligible claims have been satisfied and that the office is doing the best it can.

The labor department has significantly beefed up staffing to continue to meet the demands of the unprecedented volume of emails, phone calls and claims prompted by the pandemic-induced economic distress.

In the wake of the March statewide shutdown prompted by the coronavirus, unemployment compensation claims in Pennsylvania surged from 40,000 to a current estimate of 3 million. The department has distributed $29 billion in benefits, including traditional state benefits as well as federal funds under the CARES Act.

The majority — 92 percent — of claims filed between March 15 and June 20 have either been paid or determined eligible. The remaining 8 percent have needed to be reviewed manually. But that number means tens of thousands of people are waiting.

In the meantime, the unemployment rate in Pennsylvania has surged to 13 percent. 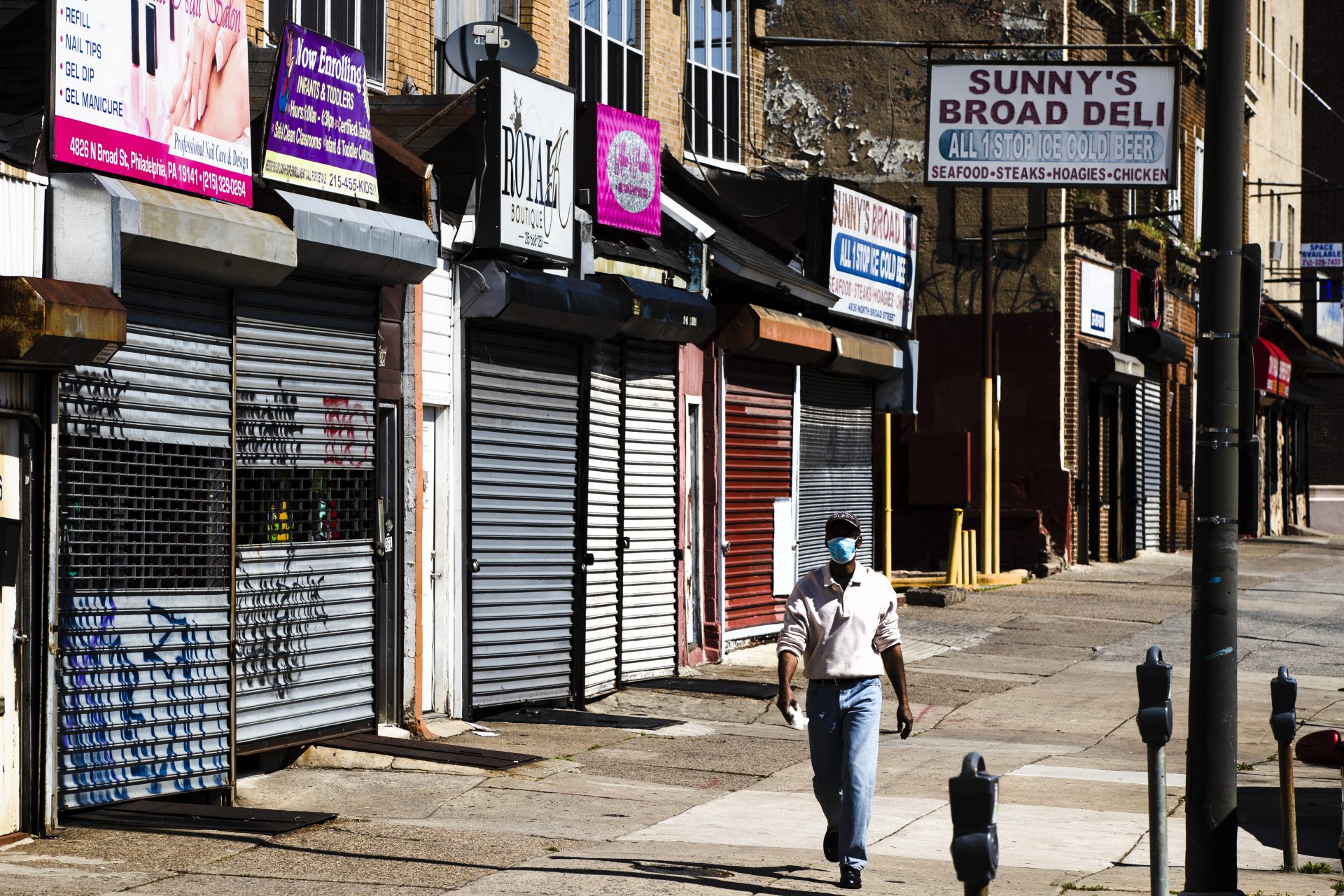 A person wearing a protective face mask as a precaution against the coronavirus walks past stuttered businesses in Philadelphia, Thursday, May 7, 2020. Nearly 3.2 million laid-off workers applied for unemployment benefits last week as the business shutdowns caused by the viral outbreak deepened the worst U.S. economic catastrophe in decades.

Four months after the coronavirus prompted a statewide shutdown, leading to widespread job losses, legions of men and women like Marsac, who have lost jobs or have seen wages reduced, report they are still struggling to collect unemployment funds.

For thousands, it’s the same story: The state website routinely crashes, phone calls are dropped, if they can ever get through; chat lines are not staffed; and in general, service on the end is unresponsive.

“The support is a disaster regardless of what that office is claiming,” said Lou James, a Philadelphia suburb resident who has been helping his wife clear hurdles but with little success.

“We have made several attempts to contact that office, holding on the line for over an hour at a time, with no response … the unemployment compensation office performance is deplorable….. Please don’t paint a picture of the UE office running a smooth operation. It continues to be an inefficient, wholly antiquated and frustrating process bound together by some prehistoric program, staffed by too few and inexperienced folks, isolated and inaccessible from the public who has grown increasingly frustrated, angry and dire given the lack of financial support.”

A self-employed, 25-year farmer, Menzies would typically earn $600 to $800 a week buying and selling hay to horse farmers. When the statewide lockdown was issued, Menzies stayed home. Meanwhile, orders froze and the cash flow stopped.

She says she has “fallen through the cracks” and is having no success getting the financial assistance through the unemployment compensation office. She has filed every other week since April 19 and has received a pin number, a confirmation letter and even the debit card. She said she has called the phone line “literally thousands of times and only get a busy signal.”

Emails have gone unanswered; as have queries to the office of Rep. Ryan McKenzie, Sen. Pat Toomey and Gov. Tom Wolf.

“This financial crisis was put onto me without my consent,” Menzies said. “I complied, stayed home, and felt some comfort that the governor and federal compensation would get me through. But I feel the fool now, because nothing has come through…and I feel the idiot because I can’t get through to a faceless person who could help me, or at least talk to me. I’m depressed, I’m desperate, I’m afraid of the future.”

Indeed, the narratives continue to clash.

“These are not faceless, nameless people,” he said. “These are family members, friends, neighbors, relatives.”

Oleksiak said that while department staff have accomplished a lot, he is not satisfied.

“It’s really just a matter of numbers,” Oleksiak said. “We are very busy. What’s frustrating for me and I know it’s frustrating for people who haven’t received anything is that those numbers don’t mean anything if you are not on the right side of the statistics. We understand that.” 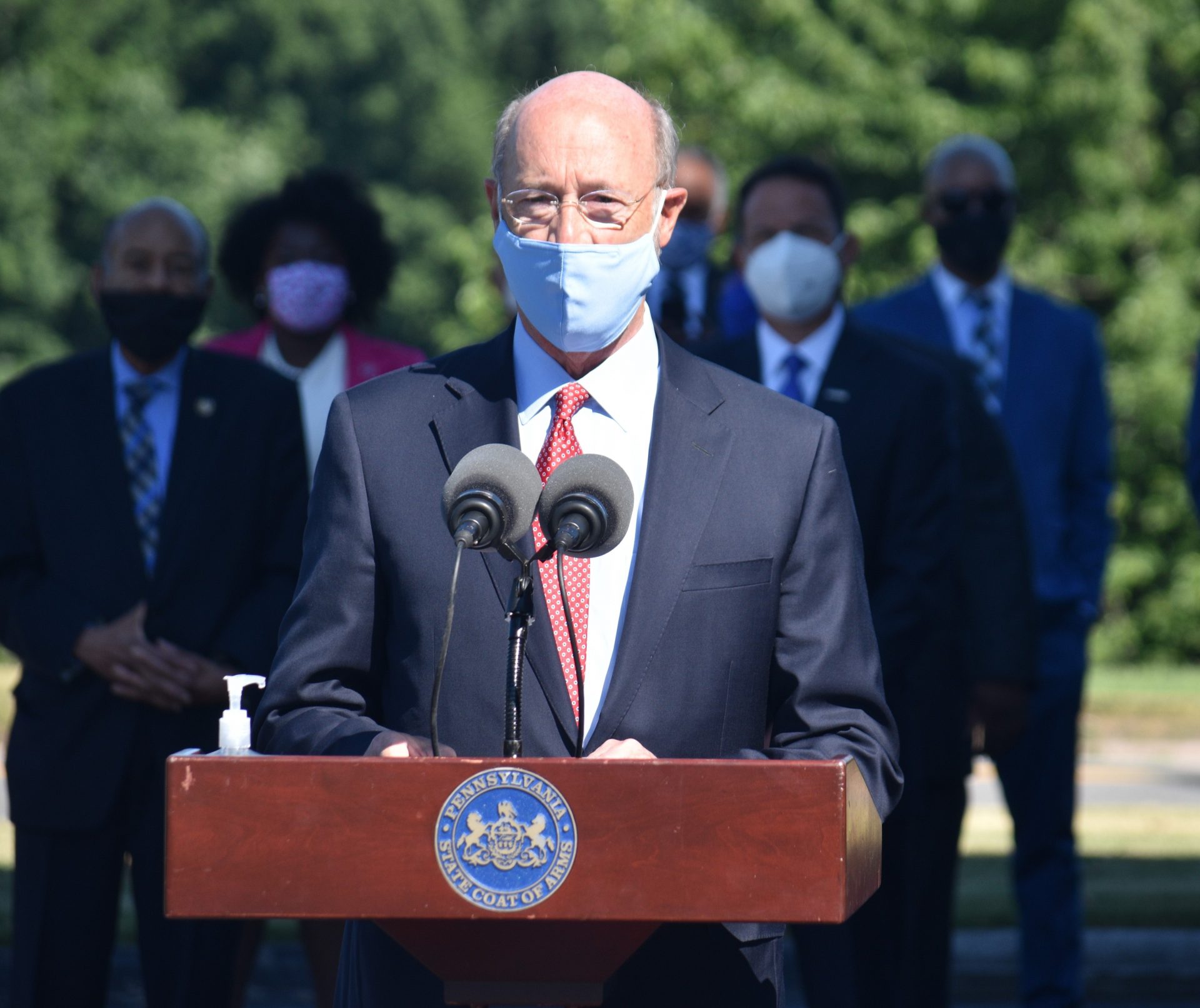 The governor this week said he recognized the urgency of the situation.

“I don’t care if it’s 10 percent or 5 percent or 1 percent,” Wolf said. “If there is one person who has not gotten served correctly, that’s a problem and we recognize we have a problem.”

Despite the mobilization that the state put in place to meet the surge of claim numbers, the “small handful of people in the Commonwealth not served in timely fashion” must be addressed.

“That’s a problem and we continue to work on it,” Wolf said.

Oleksiak stressed that the department continues to ask people to limit the number of emails, preferably to one email.

“I understand the frustration but that just bogs down the system,” he said.

In good times, Oleksiak noted, the system could easily take six to eight weeks to make a determination on claims. Given the high volume that wait time is exponentially increased.

Oleksiak gave assurances that all residents eligible for compensation would receive their benefits – without having to wait too much longer.

“That is the business that we are in,” he said. “We don’t want to not give people the benefits. We want to do that but we have fiduciary responsibility.

Oleksiak said fraud remains rampant, and is a factor in the speed of determinations.

He said the department has no backlog with pin numbers; and that the biggest hold up continues to be claims that require special action, such as the release of federal or military wages.

“Those are things that are outside our control,” Oleksiak said.

Oleksiak gave assurances that individuals whose claims fell within the eligibility requirements for the extra $600 per week in unemployment assistance from the federal government would receive those funds. The program is set to expire at the end of the week.

“They will be made whole,” he said. “If they were eligible during that time, they will receive that benefit.”

Oleksiak said that compared to other states, Pennsylvania has done a decent job fulfilling all the claims.

He said other state agencies have reached out to him to see how Pennsylvania does it. Some states have shut down their call centers; others their email systems.

“I’m aware people are not getting benefits. To them it doesn’t matter how well we are doing. We want to do what we can to get to those folks,” Oleksiak said.

In the meantime, Marsac, who has resumed with his business as much as possible, worries about his family’s welfare and his health. His parents help a bit and he has turned to SNAP in order to feed his children, but he remains troubled by the lack of state unemployment compensation.

“I work as much as I can,” he said. “It’s not easy with daycare. I’m trying the best I can. It’s more frustrating how much I‘ve lost and not gotten any help…..things don’t stop.”

‘We did it, and we can do it’: A Bucks County Rosie helps fight a new foe