Pennsylvania is becoming more racially diverse. And that could be a big deal for the 2020 election.

Demographic data shows if PresidentTrump intends to capture the commonwealth again this year, he can’t rely on the same coalition he relied on four years ago.

(Hazelton) — Amilcar Arroyo recalls that when he first came to Hazleton, a small city in southern Luzerne County, in 1989, he was one of just a handful of Spanish-speaking people who lived there.

But things have changed so much since then.

Almost 60% of the people who now live in Hazleton are Latino. In 2002 Arroyo, who is originally from Peru, launched a Spanish-language newsletter to help people find services and community, and it blossomed into a monthly newspaper, El Mensajero International. As its publisher, he takes pride in listing all the businesses — grocery stores, restaurants — owned by immigrants from the Dominican Republic, Mexico and countries in Central and South America that now line the city’s streets.

“Hazleton was a town of elderly people with a very small young population,” Arroyo said of his early days in the city. “If Latino people didn’t come to this area to live in Hazleton, it would be, I don’t want to say a ghost town, but that’s what people say.”

Hazleton’s transition from a mostly white to a mostly Latino city was relatively quick, and has been well-documented and analyzed over the years. But it’s just one high-profile example of a change that’s gradually happening all across Pennsylvania that has big electoral and political implications.

Trump won Pennsylvania by a hair’s breadth, thanks largely to a surge in support from white voters — specifically, ones who don’t have a college degree.

It’s a group that has increasingly undergirded the Republican Party’s base for years — but it’s also one that is steadily shrinking in crucial swing states like Pennsylvania. 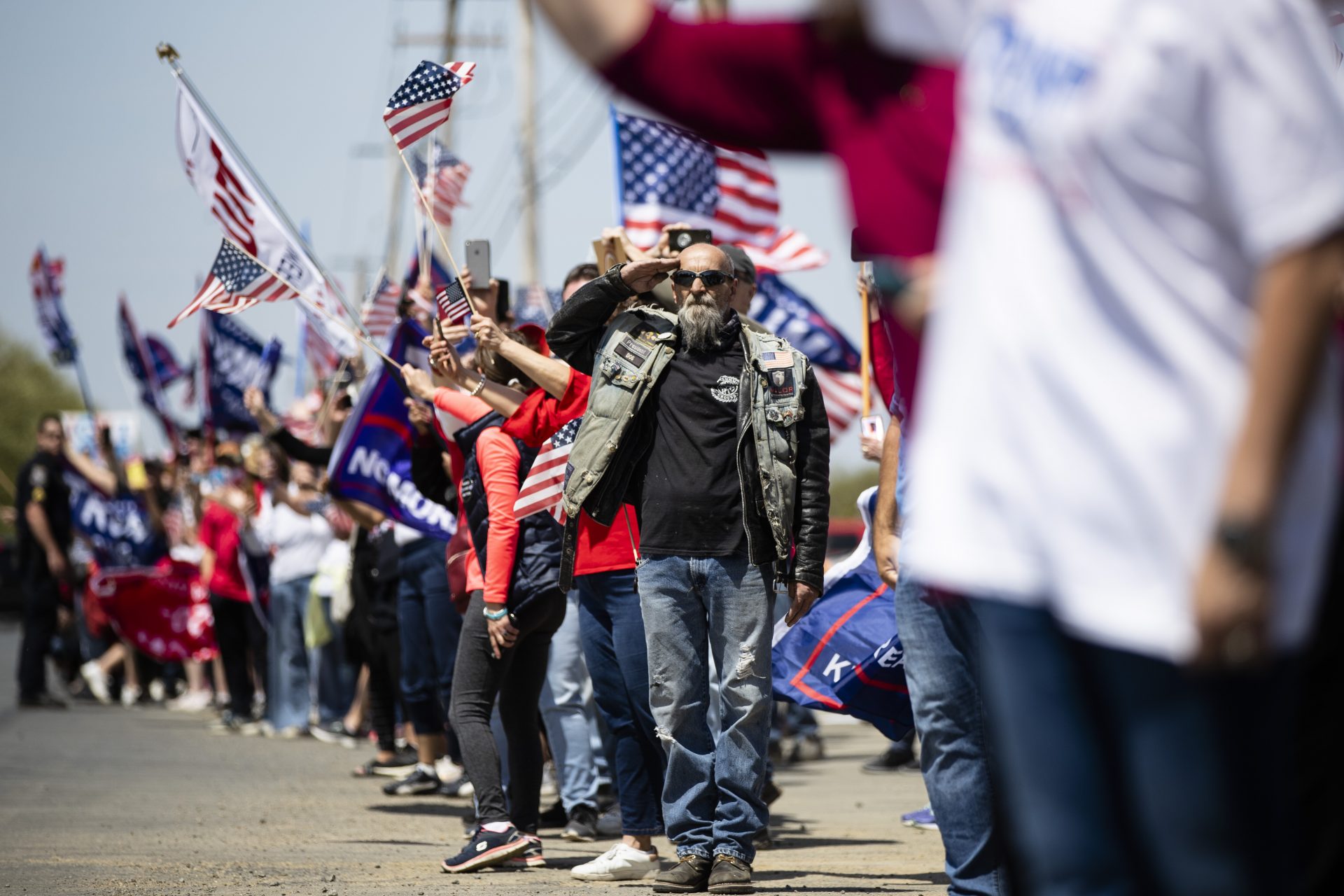 A man salutes as President Donald Trump’s motorcade drives past on Thursday, May 14, 2020, in Allentown, Pa.

Demographic data shows that if Trump intends to capture the commonwealth again this year, he can’t rely on the same coalition he relied on four years ago.

“If everything remains the same in 2020 as it was in 2016 — of course it won’t, but in terms of turnout patterns and support levels among these different demographic groups — just that much demographic change … would be enough to tip the election to the Democrats,” said Ruy Teixeira, a fellow at liberal-leaning think tank the Center for American Progress.

Teixeira has tracked demographic changes and their impact on elections over many cycles, and said the changes Pennsylvania sees during every four-year presidential term have lately followed a “basic pattern.”

Numbers of what he calls “white, non-college voters” decline, and Latino, Black and Asian residents make up a growing share of the voter base.

He said in 2016, that meant Trump “would have needed a huge swing in his favor among white, non-college voters, who are still a huge proportion of the Pennsylvania electorate … and by God, that’s exactly what happened.”

That swing was “unusually large,” he noted — Hillary Clinton lost the demographic by about 29 points, while Mitt Romney had carried it by 20 points four years previously.

In 2020, that all-important swing will have to be even larger if the president isn’t able to make inroads with, for instance, white college-educated voters. They make up a significant portion of the Philadelphia suburbs, which Republicans have long considered crucial.

“He has to hold his base, that’s absolutely certain” said Chris Borick, a political science professor who runs the Muhlenberg College Institute of Public Opinion. “But he also has to grow it, so he needs to find areas to do it, including marginal gains in places like Philadelphia and suburban Philadelphia.”

Borick pointed to recent polls that show Trump has become less popular overall since the coronavirus pandemic began, and noted that he generally ranks more unfavorably than favorably among suburban voters — though economic issues remain one potential GOP strong point with that group.

He also agreed with Teixeira’s assessment of Pennsylvania’s shifting demographics.

“Just look at the census and state data on population changes over time,” he said. “If you overlay growing counties with counties that are losing population and then overlay the 2016 map … there’s not many red counties growing.” 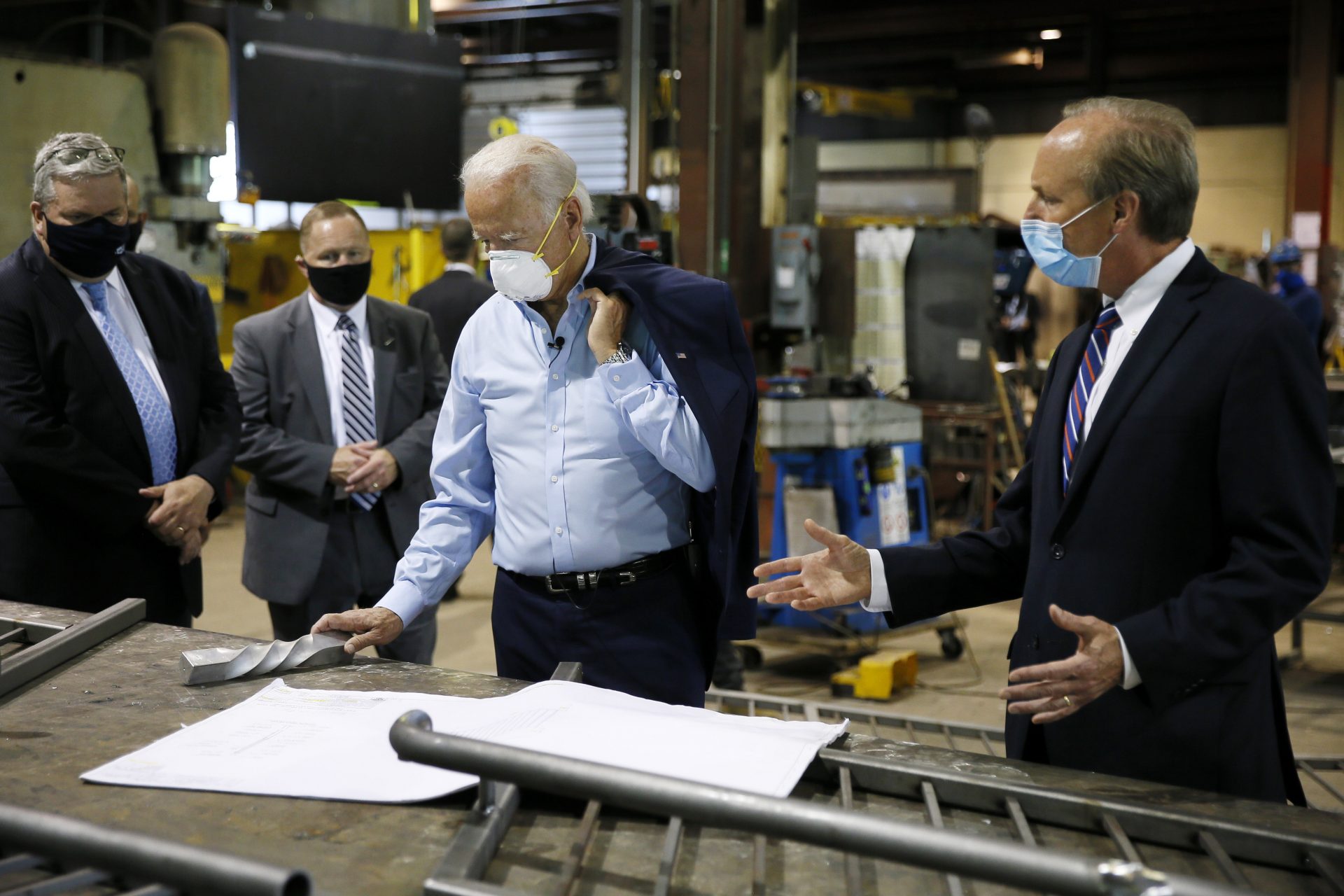 Change, by the numbers

When Trump turned out white, non-college voters four years ago, their influence was especially pronounced in the historically blue, working-class towns and cities where Democrats were once dominant.

Take the three counties that turned red in 2016, for instance: Erie, Northampton and Luzerne.

In 2012, Barack Obama beat Mitt Romney by about nine percentage points in Erie and five in Northampton and Luzerne counties. Four years later, they swung to Trump by one, four and a whopping 19 percentage points respectively.

Pennsylvania’s Department of State, which keeps those numbers, doesn’t break down the votes by demographic group — though Teixeira noted, while white, non-college voters comprise 51% of the commonwealth’s overall electorate, they made up about two-thirds of Trump’s 2016 voter base.

But by looking at county-level demographic data overall, it’s possible to get a clearer picture of the people who make up the electorates in key counties, and how those electorates are changing.

At the end of 2019, Erie County was 84% white. But in the last four years, as its total population declined by 2.3%, the county’s white population shrank by 3.2% while its Latino and Asian populations grew by 5% and 12.8%, respectively.

Luzerne County, 79% white, has had a fairly stable population over the last four years, but its number of white residents shrank notably, by 4.2%. Meanwhile, its number of Black residents grew by 13.9%, and its share of Latino residents increased by 26.1%.

Tim Schock, an analyst who keeps track of these demographic numbers at the Pennsylvania State Data Center, noted that within the last four years, Pennsylvania’s total Latino population broke a million, a “pretty significant shift during that time.”

In places like Luzerne, he added, the changes are especially stark. Since Trump carried the county, numbers of Latino residents have grown by almost three percentage points and now comprise nearly 14% of the population.

Another group that’s rising in several key counties, Black voters, is often discussed less in conversations about demographic impact on elections. In large part, that’s because of Black voters’ historically strong support for Democrats. Nationwide, only about 6% of Black people voted for Trump in 2016.

However, Black turnout dropped sharply in 2016, and Black support for Hillary Clinton was notably lower in 2016 than it was for President Barack Obama in 2012 and 2008.

State Sen. Anthony Williams, a Democrat from Philadelphia, said he thinks results like these show that Democrats often take Black voters for granted — to the party’s detriment.

“I don’t think it’s intentional, but there’s an assumption that there is some homogeneous perspective when it comes to Black people,” Williams said.

He says if Democrats want to motivate Black voters to turn out in big numbers, they need to engage them on a wider variety of issues.

“Other than saying things like ‘we want to get rid of poverty,’ I’ve not heard the party talk about how we bring in real, quality education, how in a city where the majority of the community is Black people, we’re not significantly employed in law firms, professional firms,” he said. 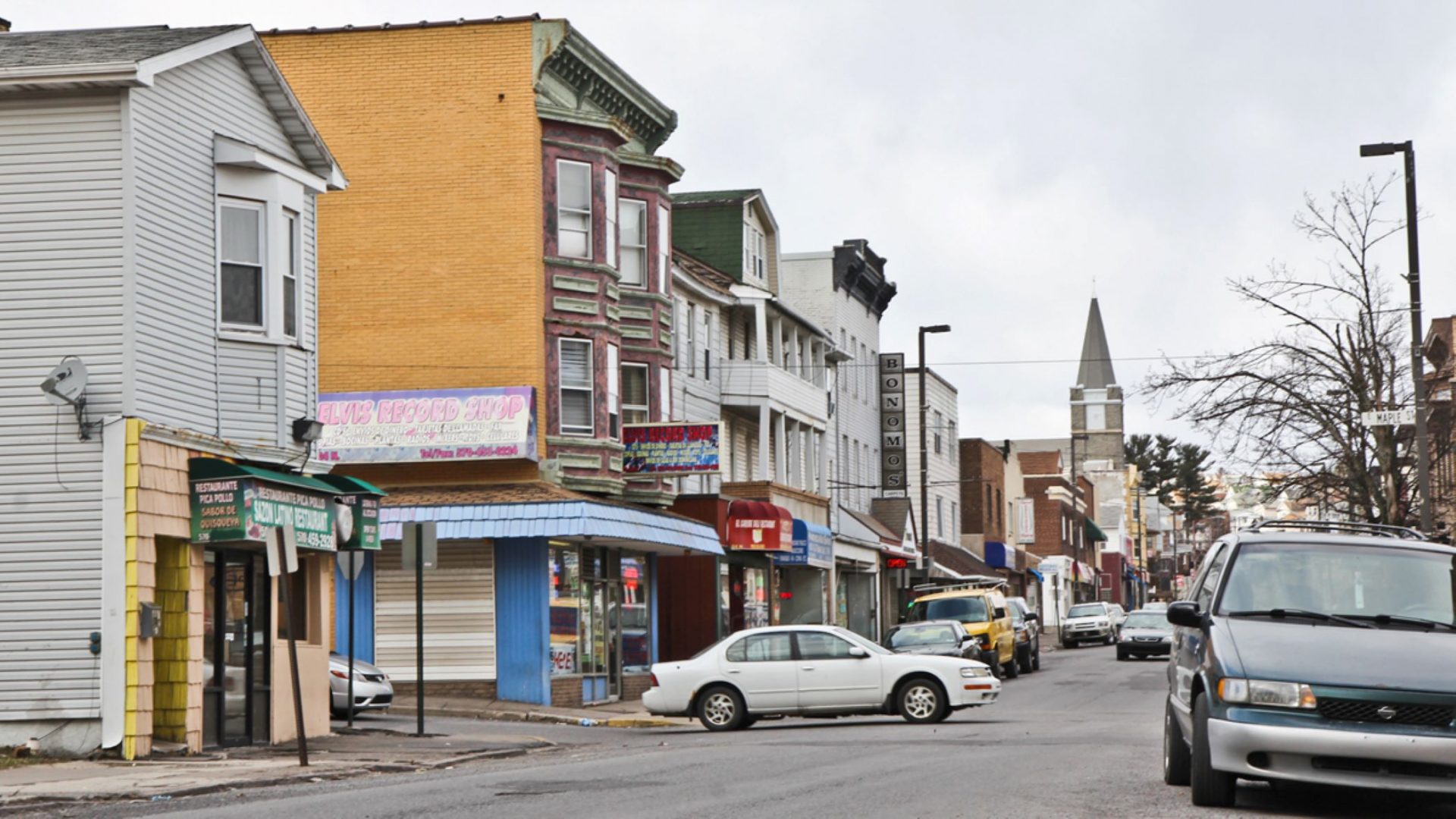 Wyoming Street in Hazelton, Pa. was once nearly vacant but since a wave of immigration, almost 90% of storefronts are filled.

Arroyo, the Hazleton newspaper publisher, has known that firsthand for decades.

When he got to the city in 1989 he was one of maybe 100 Latino residents, and said he didn’t notice any ill will from the mostly white people who already lived there.

But, he said, “when the people who were born and raised here noticed more and more Latino people coming here, and the clash of cultures, and the way they live, how they speak, how they play their music … that is when we started having a problem.”

From his perspective, the situation hit rock bottom in 2006.

That’s when then-mayor Lou Barletta, a Republican and lifelong Hazletonian, pushed an ordinance that would have barred undocumented immigrants in Hazleton from being hired or renting housing. It never took effect — a federal judge blocked it immediately and it was ultimately shut down completely. Barletta’s related effort to make English Hazleton’s official language met the same end.

But Arroyo said the damage to the community was profound.

“It was an ordinance against undocumented immigrants that turned [Hazleton’s white residents] against everyone who looked Hispanic, who was Hispanic, who was speaking Spanish,” he said. “It was very bad years between 2006 and 2008, I would say.”

Barletta has since departed from public life. After his mayoral tenure, he won a seat in Congress, became a staunch Trump surrogate, then badly lost a U.S. Senate bid against Democrat Bob Casey.

Arroyo doesn’t dwell too much on Barletta’s tenure anymore. He said these days, Hazleton still has “a couple guys” who won’t accept new immigrants, but overall the city is no longer so divided. Most native Hazletonians, he said, welcome immigrants, have largely recognized their contributions to the business community.

Beyond Hazleton, he noted, is still a different story.

Luzerne is, after all, a county that voted heavily for Trump. Arroyo, who lives outside the city, recalled that in the 2016 general election it took him much longer to vote than usual — he thinks because so many white people who generally wouldn’t vote turned out to support Trump.

The appeal feels familiar to him.

“What is going on in the United States at this time, we suffered that discrimination and racism in 2006, 2007, 2008,” he said. “The message when Donald Trump was a candidate was making a division … to paint the Latino people as invaders … that they don’t pay taxes, that they don’t speak the language, that they sell drugs, that they are ‘bad hombres,’ like he said.”

Trump’s large margins in Luzerne County likely would have looked different if the rapidly growing Latino population had stronger voter turnout. Latinos are not a monolith — polling has shown that a considerable portion skew conservative — but they’ve long been seen as an untapped source of votes for Democrats — a so-called “sleeping giant.”

Arroyo, for one, said he thinks that turnout will happen. It’ll just take time.

“It is coming, but little by little,” he said. “We are a baby generation. We’ve just lived in this area for the last 10 to 15 years. A generation takes more than that to understand, really, the American way to live. We love this country, believe me.” 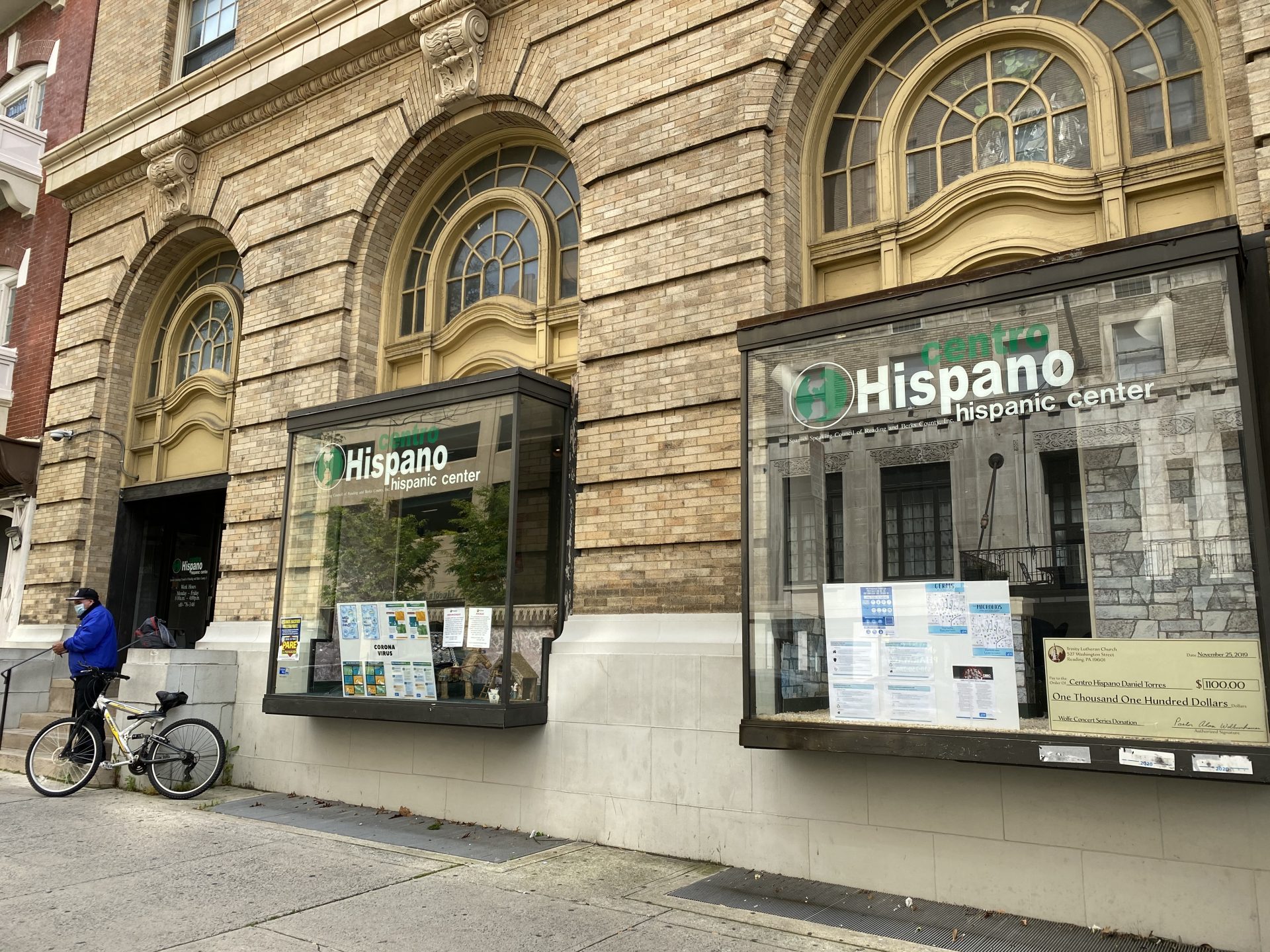 Centro’s offices are closed to public visits, though it is still feeding seniors. The windows of the center’s building in downtown Reading are filled with informational posters.

Demographic changes will be just one part of the 2020 presidential equation.

Teixeira couches his observation that, all things equal, those changes would wipe out Trump’s 2020 win with the reminder that all things will not, of course, be equal.

For one thing, polling averages in Pennsylvania have shown Joe Biden cutting significantly into the president’s margins among his crucial “white, non-college” voters — Teixeira estimates the former vice president has — as it stands today — shaved about 10 to 20 points off Democrats’ 30 point 2016 deficit in that group. Biden is also pulling strong support among white college-educated voters.

Those poll averages peg Biden as having a seven to eight percentage point advantage over Trump. Of course, Hillary Clinton also led the president in polls for much of the 2016 campaign. Asked whether he’s factoring in potential for change or error, Teixeira laughs.

“Absolutely,” he said. “Sure, it could definitely happen, polls aren’t perfect. Are there ‘shy’ Trump voters? Are they under-sampling white non-college voters? It’s always possible.”

But, he added, there would have to be a “pretty big” — and unlikely — polling error to reverse the trend he’s seeing right now: that the president’s hoped-for wave of white voters just needs to be higher if it’s going to carry him to victory.