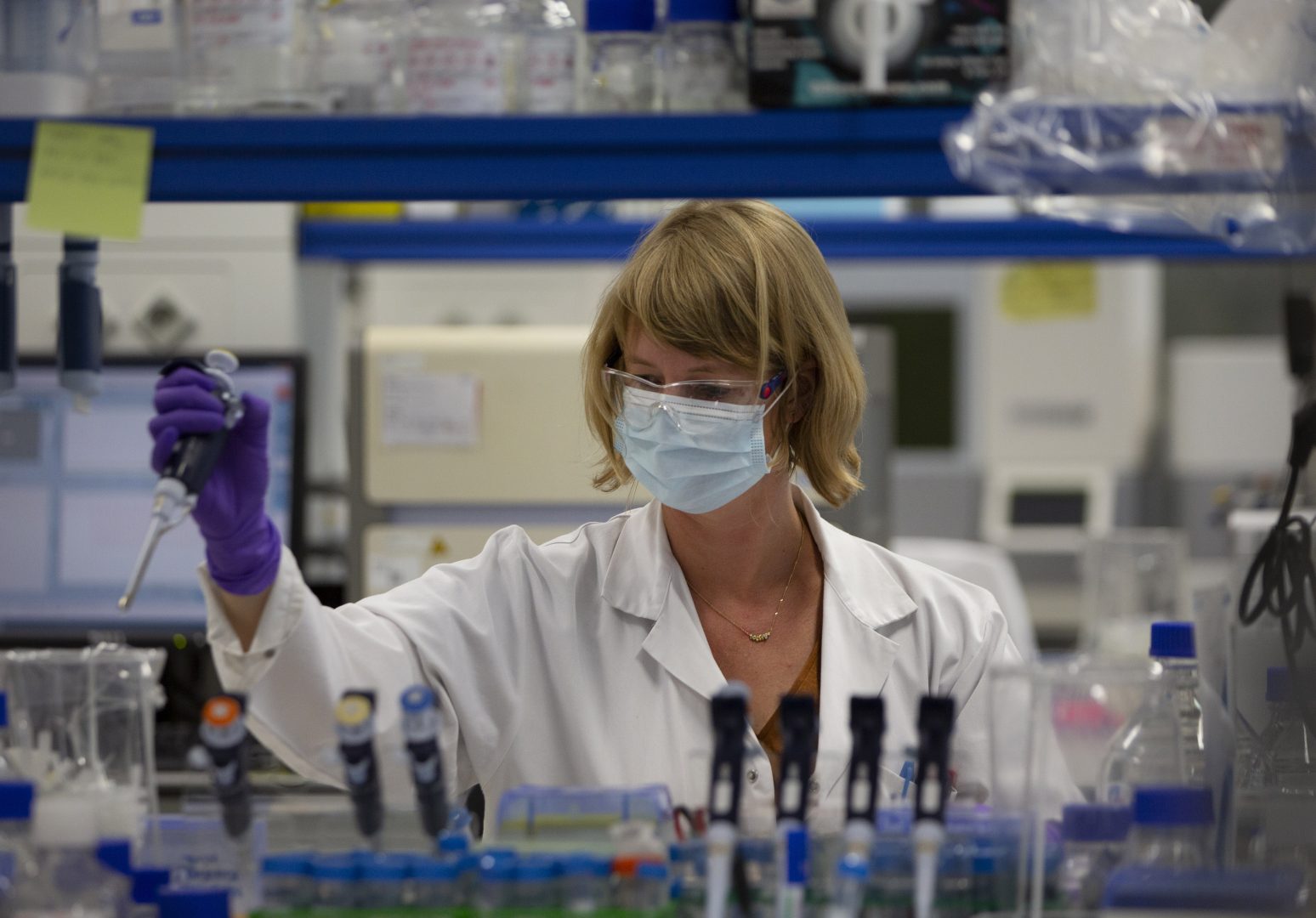 A declining death rate is typical of any new disease. Initially, without any diagnostic testing and limited research about the illness, the sickest patients are identified, the ones who are most likely to die.

At the coronavirus pandemic’s peak in the middle of April, an average of 37 people died a day in Philadelphia. At that same time, an average of 117 people were admitted to the city’s hospitals each day, meaning that roughly one-third of patients hospitalized for COVID-19 were dying.

Yet a few months later, as COVID-19 cases in Philadelphia have plateaued, a much smaller proportion of hospitalized patients die: just 18% as of July 1.

Health professionals can’t say for certain what’s causing the decline in mortality rate, but they can take a few educated guesses.

“One possible reason is that increased COVID testing and awareness is identifying people with less severe symptoms and people earlier in the course of the illness, who do better when hospitalized,” Philadelphia Health Commissioner Thomas Farley said in an email.

In other words, as the disease progresses, the mortality rate drops because we catch people before they get too sick.

But science gets some credit, too.

As new research has emerged about the virus, Philadelphia hospitals have adapted their treatment protocols, and hospital systems have gotten a better grasp on how to manage the disease it causes.

Hospitals get a handle

In anticipation of a surge of patients, Philadelphia’s hospitals canceled elective surgeries and outfitted COVID-only floors, wings or entire buildings to be able to safely segregate those patients from everyone else. They transformed operating rooms into intensive care units, outfitted with mechanical ventilators.

At the pandemic’s peak, Temple University Hospital was treating 185 COVID-19 patients per day. Einstein saw 250; Penn maxed out around 100 at the Hospital of the University of Pennsylvania, where they had six floors dedicated just to COVID patients. (The majority of deaths from the novel coronavirus, but not all, were occurring in hospital settings at that time.)

One major source of stress for medical professionals was knowing for sure whether a patient indeed had COVID-19. Slow testing turnarounds and frequent false negative results caused hospitals to treat any patient with COVID-like symptoms as a COVID patient. It also meant that patients coming to the hospital for other reasons who also happened to have COVID-19 were more likely to go undetected, risking the infection of other patients or health care workers.

Now, all the hospitals are outfitted with in-house rapid testing, allowing them to know whether  patients test positive for the virus within a few hours so they can be placed in the appropriate area.

Another point of anxiety for many hospital staff at the start of the pandemic was the low supply of personal protective equipment like N95 respirators, gowns and surgical masks. The Centers for Disease Control and Prevention recommended reusing N95s, but doctors and nurses were afraid that doing so could facilitate the transfer of the virus from one patient to another, or create greater risk of becoming infected themselves. The hospitals worked with the Pennsylvania Emergency Management Agency to secure a machine that decontaminates masks using hydrogen peroxide mist, for regional health systems to share. What was once unthinkable has now become institutionalized: At Penn, health care workers leave their N95s on a rack by the door at the end of their shifts, for them to be sterilized.

“We put our name on the damn thing with Magic Marker,” said Stephen Gluckman, an infectious disease specialist at the University of Pennsylvania. He said they felt comfortable with the new procedure because coronavirus counts among health care workers remained low.

At Jefferson, a robust telehealth infrastructure was already in place, and it kicked into gear to steer patients away from the hospital. Other hospitals followed suit. While many in-person visits have resumed, that system is well-oiled now.

Now, the census of COVID-19 patients at each hospital is steadily hovering between 15 and 30.  HUP went from six dedicated COVID-19 floors to half of one floor. Elective procedures have resumed at Penn, Jefferson, Einstein and Temple, and most of the hospitals are back at full or near-full capacity, though representatives from each said they stand at the ready to convert the rooms they had transformed into COVID-19 space back if case counts rise substantially.

Absent a magic pill to cure the disease, doctors use different methods to achieve different goals: They want to prevent the virus from replicating quickly in the body, stop the immune system from overreacting, treat inflammation in the lungs and vascular system, and suppress long-term effects.

Whether or not they were influenced by President Donald Trump’s unfounded endorsement of the drug, many hospitals were experimenting with hydroxychloroquine, the antimalarial medication that, in the early stages of the pandemic, showed promise as a potential treatment. But as mounting evidence started to emerge, the drug’s efficacy appeared doubtful and its potential side effects worrisome.

Rohit Gulati, executive vice president and chief medical officer at Einstein Healthcare Network, said the hospital only ever treated a handful of patients with hydroxychloroquine. Gerard Criner, who directs the Temple Lung Center, said he and his team used it on roughly 30 patients, though there is still one ongoing trial for health care workers. All Philadelphia hospitals have long since abandoned the medication as a go-to weapon in the treatment arsenal.

Replacing it is remdesivir, approved by the Food and Drug Administration through an emergency use authorization after clinical trials showed it shortened recovery times. It works by interrupting the process by which the virus makes copies of itself.

All four hospitals have made it a mainstay of their treatment. Einstein’s Gulati said he’s found that remdesivir is more effective at reducing recovery times and mortality rates when used at the start of treatment.

“If it’s used later, when they’re already on a ventilator, it helps but not as much as if it were used earlier,” he said.

Gulati added that the two lengths of treatment tried, five days or 10, seem to yield roughly the same results, so his team has been placing patients on the five-day treatment as a rule.

It’s also now common to combine remdesivir with a steroid treatment like dexamethasone, which has been demonstrated to reduce mortality rates by suppressing the immune system and preventing it from overreacting to the virus. A hyperactive immune response is often what causes the lungs to fill with fluid, which can lead to death.

Steroid use was initially discouraged by the CDC and the World Health Organization out of concern that a suppressed immune system could open the door to recurring infection. Still, Criner’s team at Temple used the treatment from the start regardless. He said they believed the reports coming in from doctors with the Chinese Medical Society over the WHO.

“Who do you believe: Someone sitting in London who basically isn’t treating any people, or the people who are treating people?” said Criner. WHO and CDC have since endorsed steroid treatment, for its ability to reduce lung inflammation, after randomized controlled trials have borne out its efficacy.

“It’s like doing a trial of someone jumping out of a plane with a parachute, you know, you’re basically trying to save as many lives as you can.”

On top of remdesivir and steroids, it’s common for patients to also be enrolled in ongoing investigative trials, like those testing convalescent plasma therapy and attempts to reduce early blood-clotting.

Getting air into the lungs

At the peak of the pandemic, learning a loved one had to go on a ventilator could feel like receiving a death sentence: It was the last resort for pumping oxygen into the lungs when a patient couldn’t do it otherwise, and early reports out of Wuhan and New York showed as many as 90% of patients placed on ventilators ended up dying. But a lot more is known now, about when and how to provide oxygenation safely, so that ventilator use can be avoided all together.

Ventilators are risky, in part, because they involve sedatives and invasive intubation procedures. Yet initially, relying on less invasive oxygen support was discouraged, on the grounds that the aerosols it produced would put health care workers at risk of infection.

Criner said his team was confident from the beginning that wouldn’t be the case if oxygen flow from the noninvasive means was high enough. Research has since emerged from Europe to support this finding. Getting patients on high-flow, non-invasive oxygen instead of placing them on ventilators is becoming more and more common.

All four hospitals are also practicing proning, the practice of flipping a patient onto his or her stomach to increase airflow to the lungs. The technique is underutilized but effective for other lung diseases, in part, because patients often find it uncomfortable and it requires a lot of labor to move patients. Gluckman at Penn said that although no hospital beds are designed for it, they encourage patients to lie prone even if they are not on any oxygen support — at least for a few hours.

The scariest part of this virus for many health care workers may have been its “novel” aspect: not knowing exactly what the virus would do to which patients, or how to precisely respond.

So throughout the peak weeks of the pandemic, the city’s chief medical officers did one more thing they had never done before: At least one evening a week, they got on the phone together. Competitors under normal circumstances, they swapped observations, shared successful techniques, and learned from one another.

While there is still no cure, there is one thing health care workers can count on: COVID-19 will never be new again.