Plexiglas dividers separate video gaming machines at Rivers Casino in Pittsburgh on Monday, June 8, 2020. The casino is scheduled to re-open at 9 a.m. Tuesday, operating at 50% capacity to comply with Pennsylvania Gaming Control Board COVID-19 protocols.

“Our safety is last." 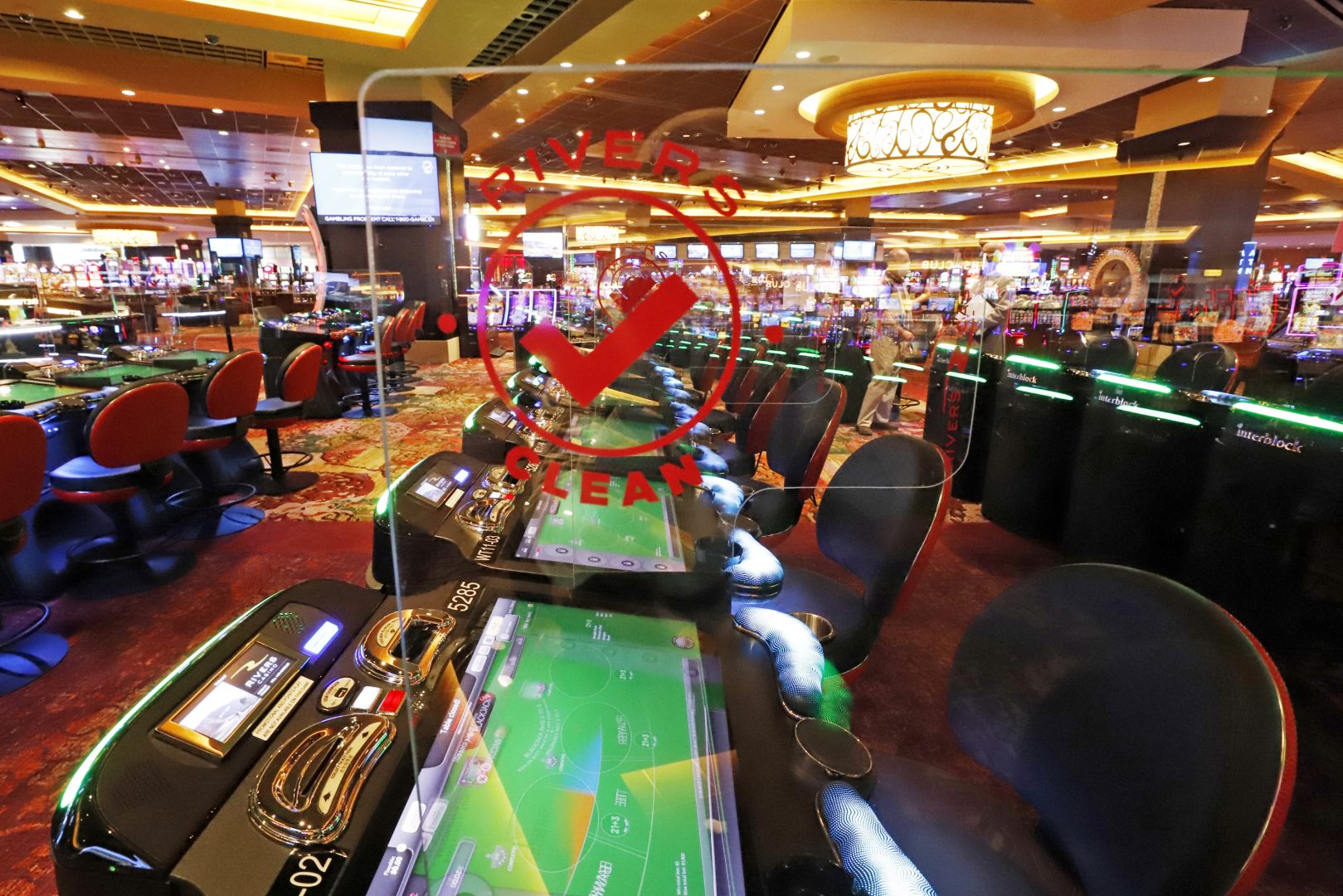 Plexiglas dividers separate video gaming machines at Rivers Casino in Pittsburgh on Monday, June 8, 2020. The casino is scheduled to re-open at 9 a.m. Tuesday, operating at 50% capacity to comply with Pennsylvania Gaming Control Board COVID-19 protocols.

(Pittsburgh) — On July 10, the day Rivers Casino reopened after a week-long closure that also shuttered bars and restaurant dining rooms in Allegheny County, there were signs the North Side gambling complex was trying not to take unnecessary chances.

Like other entertainment venues operating under state and county rules, the casino is limited to half-capacity. Masks are required for patrons and workers, and smoking is banned. Plexiglas barriers have been installed at locations like the cashier’s booth, to shield staff and patrons from the airborne droplets carrying the virus. Barriers were also installed between some slot machines, where seating has been reduced to encourage distancing.

But there are no such barriers at the casino’s table games — the more than 100 stations for craps, blackjack, roulette and more. And when a WESA reporter visited the Rivers on reopening day, he observed 11 people (including four casino employees) around a single craps table. Casino rules limit craps players to three on each side of the table, plus four employees, but that doesn’t allow for social distancing—the 11 men stood or sat shoulder-to-shoulder.

Two veteran table-games dealers at Rivers Casino told WESA that they worry the lack of barriers exposes workers to unnecessary risk. It’s at the tables, they said, where patrons are liable to spend the most time in close proximity to casino staff – typically well under 6 feet apart.

“Our safety is last,” said one of the two dealers, who both asked to remain anonymous for fear of jeopardizing their jobs.

Rivers Casino “just care[s] about the bottom line,” said the other. 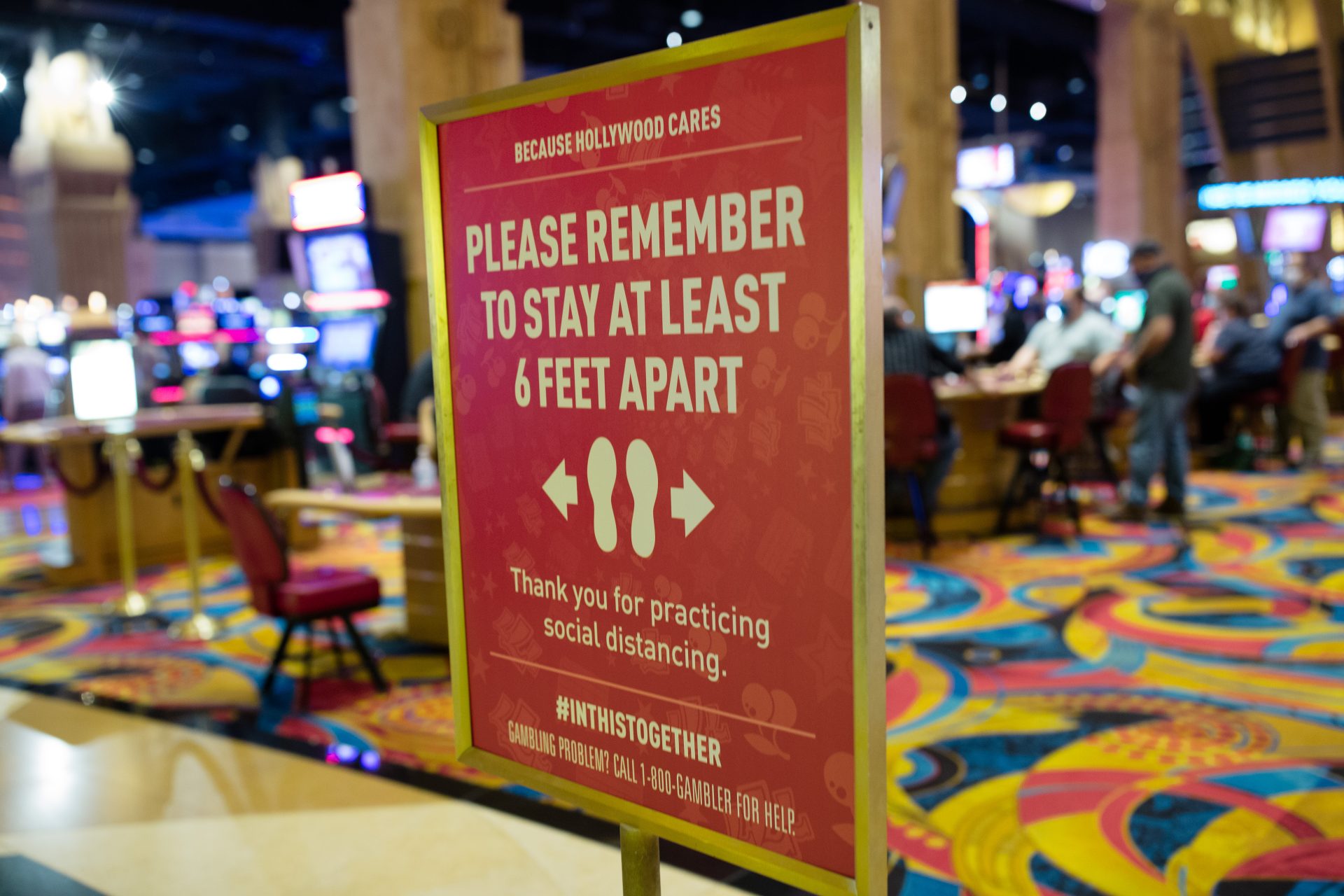 A sign directs patrons to maintain their distance at Hollywood Casino in Grantville on Friday, June 19, 2020.

A spokesperson for the North Side casino said it is following all state and county health guidelines. “We strive daily to meet or exceed all safety standards and to adapt quickly as new information becomes available,” said Jack Horner, in an emailed statement. “The health and well-being of our Team Members, guests and the Community is our top-priority.”

Rivers takes a number of precautions that include testing patrons’ temperatures upon entering the casino, as well as checking the temperature of each employee starting a shift. The casino also touts its HVAC system as an effective means of tamping down the virus’ spread.

But the casino has acknowledged that three employees have tested positive for COVID-19 since it reopened June 9, following an initial three-month pandemic shutdown that encompassed businesses across the state. And both Rivers dealers who spoke with WESA said the addition of Plexiglas barriers to the casino’s table games would make them feel notably safer.

While the dividers are not mandated, some casinos around the country — including the Rivers Casino in Des Plaines, Ill. — have also installed them at selected table games. Since the pandemic began, transparent barriers have become ubiquitous at supermarkets, pharmacies and even convenience stores. Experts say there’s a good reason.

“We know that the virus can’t get through that barrier. So [barriers] probably do have benefit,” said Dr. Brian Lamb, an internal-medicine physician with the Allegheny Health Network.  “It should be recommended that any time that you have people that are in close contact with each other, if you can provide some sort of additional barrier, more protection at this point in the pandemic is better than less.”

Lamb emphasized that while exposure for patrons of a given establishment might be relatively brief, and limited to a handful people, workers at a business like a casino might experience prolonged exposure to many more.

“These [workers] are basically day in, day out being exposed to people face-to-face, and so anything we can do to help protect these people is what we should be doing,” he said.

Dr. Philip Harber, a public-health expert at the University of Arizona, added that precautions like taking the temperatures of workers and patrons is by itself inadequate because so many people who are infected do not exhibit symptoms.

The federal Occupational Safety and Health Administration also recommends that employers install barriers “to ensure that workers do not pass potentially infectious respiratory droplets between each other,” according to an email from OSHA’s regional office.

Table-games dealers at Rivers wear clear cloth masks, clear-plastic face shields, or both. But the dealers who spoke to WESA said the casino could better enforce distancing rules, which include limiting the number of players at table games.

The dealers said that before the casino’s June 9 reopening, Rivers held a staff training session on new practices to block the spread of COVID-19. Both dealers reported that casino general manager Bill Keena told staff at the training that he was “not afraid of the virus.”

The dealers said management also told workers that anyone who did fear the coronavirus should get another job, though one of the dealers also recalls managers saying they understood if employees were concerned about their safety.

Asked about this alleged episode, Horner declined comment. He also declined to answer a query about how distancing rules are enforced.

The trade group the American Gaming Association does not provide its members with detailed COVID-19 operating guidelines because the industry is governed state by state. However, spokesperson Casey Clark said, “We’re seeing all of our members in the American Gaming Association apply strict standards to ensure health and safety remains a priority not for just the customers but team members as well.”

PIAA: Fall sports to start as scheduled amid coronavirus pandemic