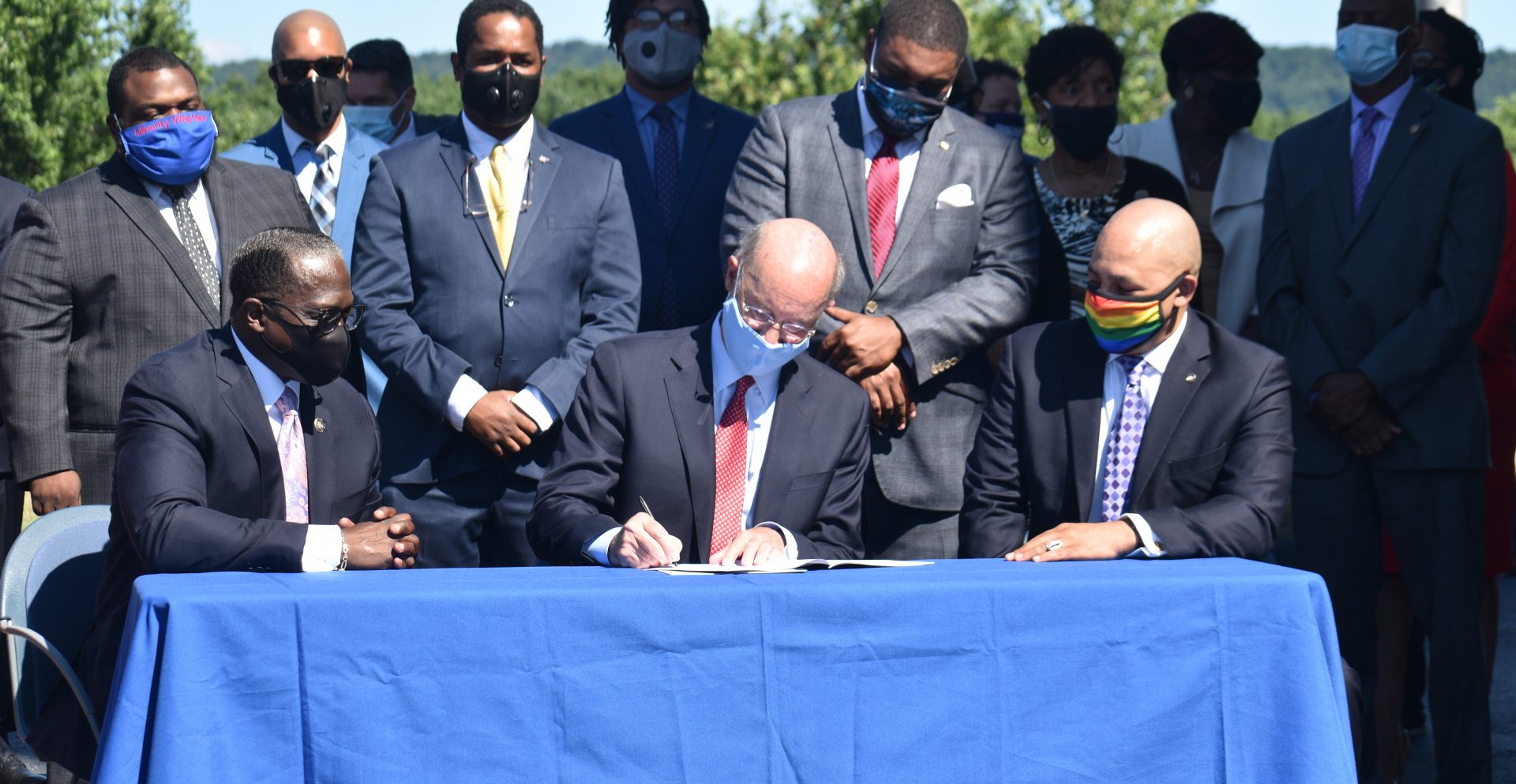 A new law signed by Governor Tom Wolf will give Pennsylvania police departments greater access to disciplinary records for officers during the hiring process.

It creates a statewide database of separation records, including criminal charges filed against an officer, ethical or civil complaints, and binding and final disciplinary actions. Pennsylvania law enforcement agencies are required to search the database when hiring a new officer, and backers of the measure say it’s aimed at preventing deaths like the 2018 killing of 17-year-old Antwon Rose II in East Pittsburgh.

The goal is to give local agencies the ability to dig into job candidates’ backgrounds. Act 57 swiftly moved through the Pennsylvania General Assembly after nationwide protests over the death in Minneapolis of George Floyd while in police custody.

But the new law provides only limited access to that information for members of the public, specifically exempting most of the employment records in the database from the state’s Right-to-Know Law.

Some states provide more public access to police officer disciplinary records. In 2015, WNYC found that 12 states make disciplinary records generally available to the public, another 15 make those documents available in some situations, and 23, including Pennsylvania, make them confidential.

Last month, New Jersey’s governor and attorney general took action to make public more disciplinary information about police officers. New Jersey State Police said it would publish the name of all all state troopers, over the past 20 years, who received suspensions of more than 180 days or whose employment was terminated as a result of misconduct.

Meanwhile, the N.J. attorney general’s office said it would require all law enforcement agencies to publish the names of law enforcement officers who have been terminated, demoted, or suspended for more than five days. Pennsylvania Attorney General Josh Shapiro, a Democrat, said he supports making more information about disciplinary records public, but he said Act 57 is focused on the hiring process. He said representatives for the public, whether it’s a police chief or mayor, will have access to disciplinary information under the law.

“They can then be held accountable by the public for the decision that they make,” Shapiro said at a bill signing news conference outside the Pennsylvania Commission on Crime and Delinquency office in  Harrisburg. “That’s where the transparency comes in. That’s where meaningful change comes.”

Act 57 does say some information should be disclosed to the broader public. If a law enforcement agency chooses to hire someone who has received final and binding discipline or been criminally convicted for any of 10 types of behavior, then the hiring agency is required to file a report “that indicates the … reasoning and rationale” for hiring the person.

The law says those hiring reports, which must be submitted to the Municipal Police Officers’ Education and Training Commission, are “subject to disclosure” uner the Right-to-Know law.

“In that hiring report, they’re going to have to explain why they ignored these red flags,” Rabb said.  “Now what happens when you ask a law enforcement agency, why did you hire this person? Do you think the chief of police wants to answer those questions?”

Still, even though the law says hiring reports are covered by the Right-to-Know Law, an attorney with the Pennsylvania News Media Association, Melissa Melewsky, said it’s not clear how much information agencies will release. She said agencies could still review the hiring reports and decide that parts shouldn’t be released because of existing exemptions in the open records law.

“There’s a lot to be figured out here when it’s put into practice,” Melewsky said.

Erik Arneson, executive director of the state’s Office of Open Records, which hears appeals in open records cases for most agencies, said he thinks the law clearly requires agencies to release the full, unredacted hiring report.

“The legislative intent, it seems to me, is crystal clear,” Arneson said.

“If somebody decides to take a very minimalistic approach to putting together one of these reports, I think that’s just going to lead to more questions,” Arneson said. “In cases like this, experience has taught us that it is very smart to get out in front of it and do a full, credible job upfront, rather than having to backfill later on when questions emerge.”

Tuesday’s signing came a little over a month after Black Democratic lawmakers protested on the Pa. House floor.