Protesters kneel in front of the Lehigh County Jail in Allentown, Pa., on Monday, July 13, 2020, to demonstrate against police brutality after video emerged of an officer placing his knee on a man's head and neck area outside a city hospital. Police have launched an internal probe.

(Allentown) — Activists against police brutality expressed outrage and demanded accountability Monday after video emerged over the weekend of an officer placing his knee on a man’s head and neck area outside an Allentown hospital.

Allentown police released a much longer surveillance video of the incident that showed the officer putting his knee on the man’s head and neck area twice while he was being restrained a few steps from the emergency room entrance — the first time for eight seconds, the second for 20 seconds.

The man appeared to be “suffering from a medical, mental health or drug and alcohol crisis,” police said in a statement late Monday.

Police violated their own policy against neck restraints when an officer used his knee to bear down on the man’s head, activists said, while the American Civil Liberties Union of Pennsylvania called it an illegal use of force.

Hundreds of people marched in downtown Allentown on Monday night, calling for the officer to be fired and police funds to be reallocated to education, mental health and other social services.

“These police officers should not have been restraining him. He needed help,” said Maegan Llerena of Make the Road Pennsylvania, an advocacy group. “Not even two months after George Floyd was murdered in Minneapolis, there was a knee on the neck of a man in front of a hospital. What is that? Can someone explain that to me?” 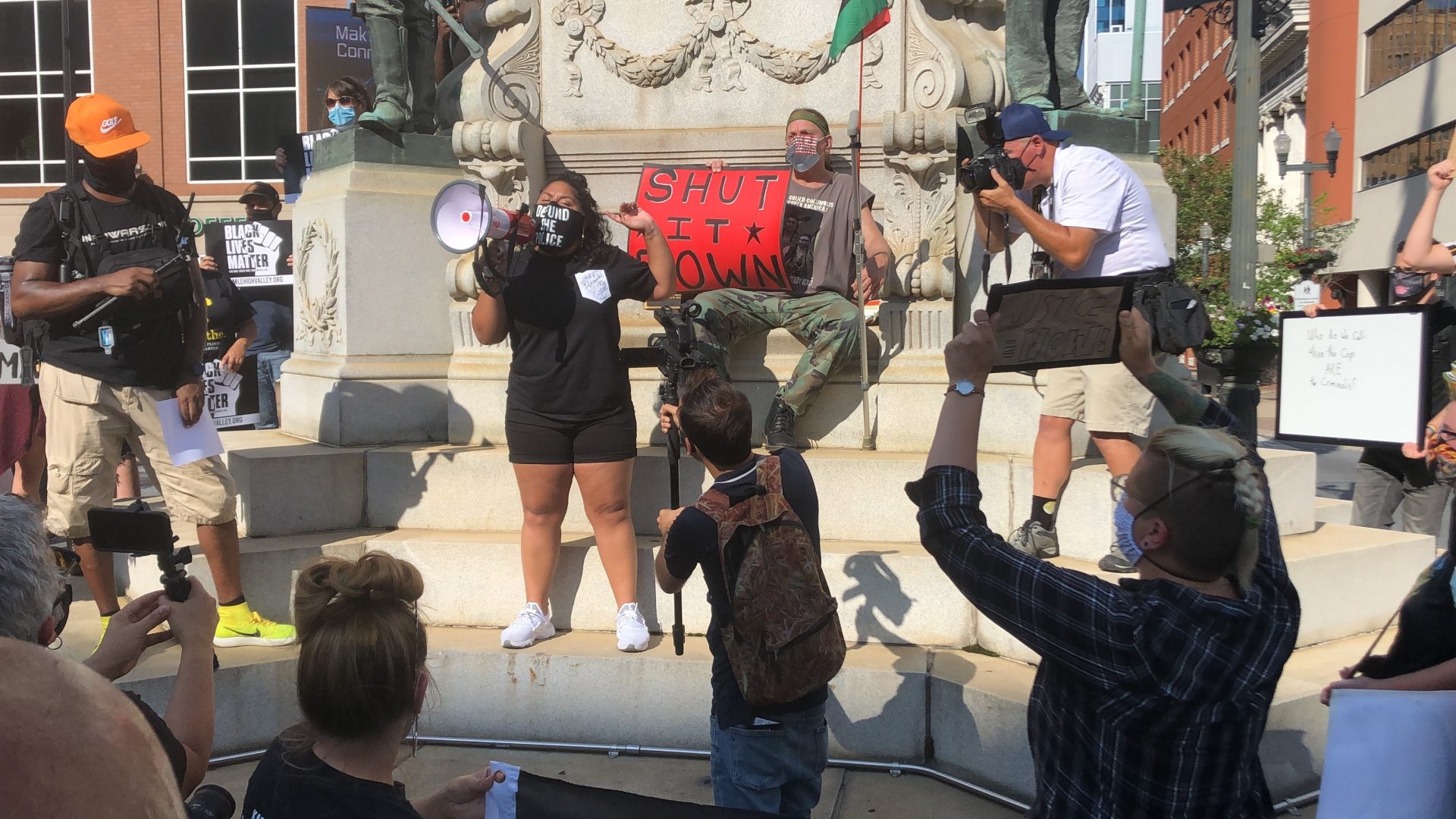 The group issued a list of demands, including the release of any police bodycam video of the incident, the suspension of the officers involved, the name and condition of the man, the establishment of a regional criminal justice review board and a reallocation of police funding.

The brief bystander video, shot from a passing vehicle and posted on social media, shows Allentown officers restraining the man on the ground outside the emergency room of the Sacred Heart Campus of St. Luke’s Hospital. An officer had his elbow on the man’s neck before switching to a knee to hold him down while other officers restrained his arms.

In the soundless, 9:38 surveillance video, released late Monday, the man can be seen staggering on the street and sidewalk, vomiting several times and stopping in the driveway of the ER.

Two of the three officers at the scene approached the man after several minutes and attempted to place him into handcuffs, and the man appeared to resist. One of the officers swept the man’s leg to bring him to the ground. Shortly after, the other officer put his knee on the man’s head and neck.

An earlier police statement said the man had begun to yell and spit at officers and hospital staff, adding the man was “noncompliant which required officers to restrain” him. The surveillance video shows a hospital staffer placing what police called a “breathable spit mask” over the man’s head, which is used to protect staff, officers and others from contact with bodily fluids.

The man was treated at the hospital and released, police said.

BREAKING:@AllentownPolice were filmed Saturday evening applying the same force to a resident that the cops used to murder #GeorgeFloyd.
This happened here in #Allentown outside a hospital.
We demand answers. We demand change.
We’re Done Dying.#DefundThePolice pic.twitter.com/AbuyvkMNdT

The ACLU criticized the police explanation.

The police department’s “appalling excuse for an officer illegally placing his knee on a man’s neck is that he was in mental distress and being ‘non-compliant,'” the group tweeted in reaction to the shorter bystander video. “Police should NOT be first responders to those in a mental health crisis.”

Attorney Benjamin Crump, who represents Floyd’s family, tweeted the bystander video, writing that the restraint used by the unidentified officer is “exactly what led to #GeorgeFloyd’s death.” Crump demanded the officer’s name.

Police have not released the name or race of any individuals seen in the video. Community advocates said they were trying to identify the man in the video to offer support.

“During a health crisis, whatever it was, when he should’ve been given support, instead he was criminalized and he received a knee to his neck,” said Hasshan Batts, executive director of Promise Neighborhoods of the Lehigh Valley, an Allentown community group.

“Our investigation is ongoing, and as we uncover additional information we’re trying to release that as we can,” Assistant Police Chief Bill Lake said.

A St. Luke’s spokesperson said the hospital has turned its own video over to police.