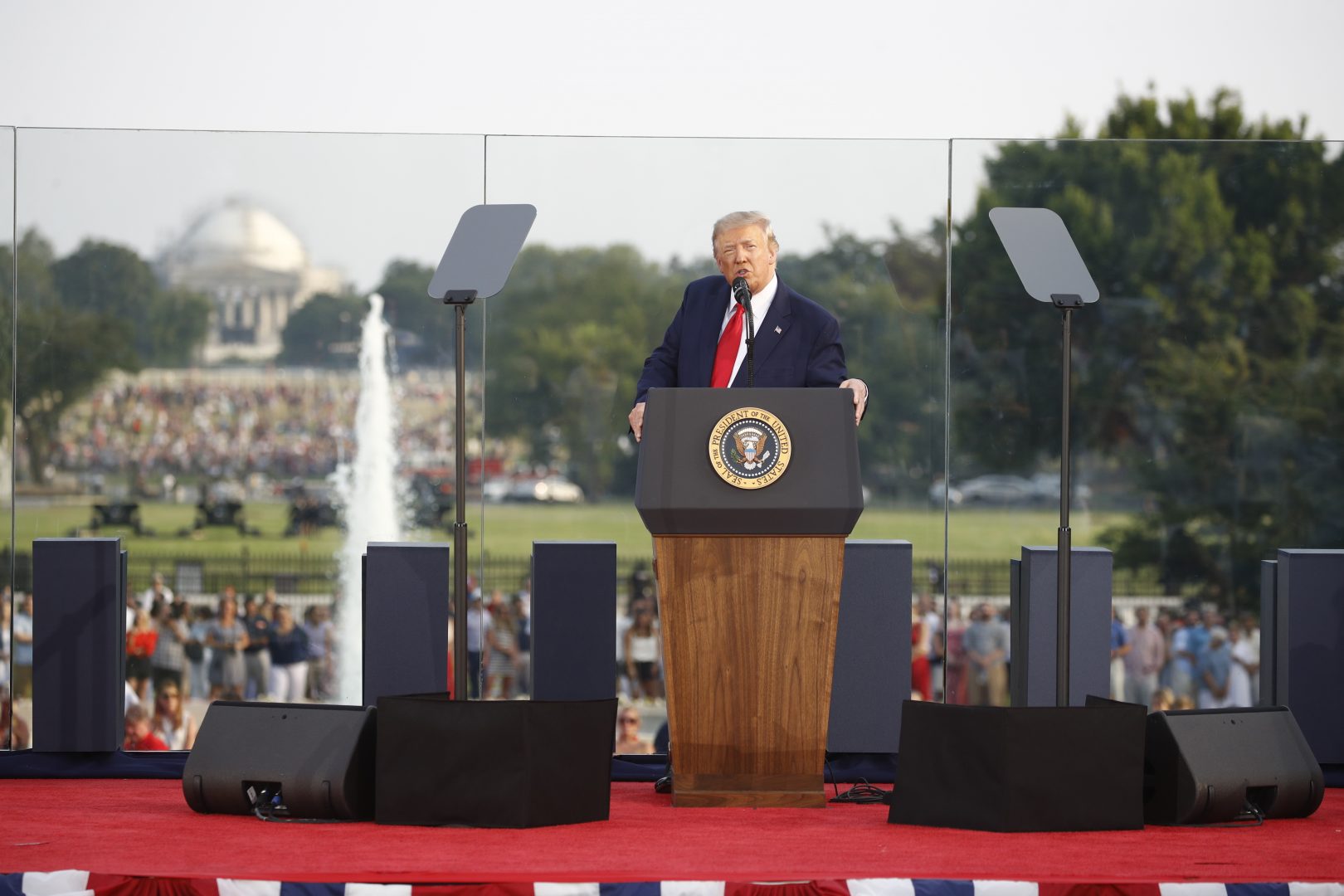 (Washington) — In an unusually divisive speech for a president on the Fourth of July holiday weekend, President Trump on Friday decried a “growing danger that threatens every blessing our ancestors fought so hard for.”

What is it? Terrorism? Polarization? A lack of trust in institutions?

No, Trump said at Mount Rushmore, it’s an attempt to erase American history and values. And one part of that, Trump said, is “cancel culture,” which he described as “driving people from their jobs, shaming dissenters, and demanding total submission from anyone who disagrees. This is the very definition of totalitarianism….”

Cancel culture is a form of group shaming — excluding someone who has done something objectionable or offensive, or withdrawing support from corporations or public leaders for the same reason. It’s often pushed from the left of the political spectrum, and there are certainly those who think it’s gone too far in some instances.

Philadelphia police officers gather near the statue of Christopher Columbus at Marconi Plaza, Monday, June 15, 2020, in the South Philadelphia neighborhood of Philadelphia.

Apart from the merits of the argument, it’s ironic that Trump is arguing for inclusivity. The fact is, there are few quicker than Trump to “cancel” people for not believing the same as he does — or supporting him faithfully. He just doesn’t call it that.

Additionally, his emphasis on cancel culture — another element of his broader culture war — can be seen as a distraction, a shiny metal object that Trump wants to use to switch the narrative and see if it sticks because he is struggling in his reelection bid.

But there are things in all likelihood that will shape this presidential election far more than “cancel culture.” Here are six, from public opinion surveys:

58% — Trump’s record disapproval: The latest NPR/PBS NewsHour/Marist poll found that Trump’s disapproval rating was up to 58%, the highest of his presidency. What’s more, 49% “strongly” disapprove of the job he’s doing. That kind of intense opposition to a president has never been seen before, since polling began.

87% — Dissatisfaction is the highest of Trump’s presidency: Amid this coronavirus pandemic and the ensuing economic freefall, the Pew Research Center recently found that 87% of Americans are dissatisfied with the direction of the country. Seventy-one percent say they are angry, 66% say they’re fearful, and just 17% are proud of the way things are going.

56% — Trump’s (mis)handling of the coronavirus: About 130,000 Americans have now died from the coronavirus. That’s about a quarter of all the deaths worldwide. A statue of a chef at Florio’s of Little Italy restaurant wears a protective face mask on the Hollywood Beach Broadwalk during the new coronavirus pandemic, Thursday, July 2, 2020, in Hollywood, Fla. In hard-hit South Florida, beaches from Palm Beach to Key West will be shut down for the Fourth of July holiday weekend. Restaurants and businesses along the Boardwalk will remain open.

And an average of 56% of people disapprove of his response to the pandemic, the highest level so far. That’s taken its toll on Trump politically, especially as states in more politically conservative places are seeing spikes in cases and hospitalizations. Pew found Democrat Joe Biden has an 11-point advantage on who’s best to handle the public health impact of the coronavirus pandemic, 52% to 41%. Fifty-two also happens to be the percentage of voters saying they would vote for Biden over Trump in the general election, according to the latest NPR/PBS NewsHour/Marist poll.

67% — Making racial tensions worse: A separate NPR/PBS NewsHour/Marist poll, conducted in early June, found two-thirds of Americans thought Trump mostly made racial tensions worse. That was after a week of protests, and right after law enforcement forcibly removed peaceful protesters outside the White House, so he could walk to a partially burned church across the street and pose with a Bible. In this June 1, 2020, photo provided by the Catholic Diocese of El Paso, Bishop Mark Seitz, center, kneels with other demonstrators at Memorial Park holding a Black Lives Matter sign in El Paso, Texas. Pope Francis called Seitz unexpectedly after he was photographed at the protest.

Yet Trump has only doubled down since then. He’s not only pushed a “law and order” message but amped it up, saying, for instance, if “Black Lives Matter” were painted on New York City’s Fifth Avenue, it would be a “symbol of hate.”

Another eyebrow-raising number is the 52% who now say they are in favor of removing Confederate statues from public spaces around the country, according to a Quinnipiac poll. Three years ago, just 39% said so.

47% — An economic handling decline: Gallup found that from January to June, the percentage of Americans approving of the job Trump’s doing on the economy declined 16 points, from 63% to 47%. The strong economy was undoubtedly buoying Trump to some extent, and now, it’s not. Trump’s lead over Biden on handling of the economy has shrunk, though he’s still up on the question in most polls.

35% — Trump’s suburban cratering: One set of numbers that will make you rub your eyes is about suburban voters. In 2016, Trump won suburban voters, 49% to 45%, according to exit polls. The latest NPR/PBS NewsHour/Marist poll, though, has Trump losing them by a whopping 60% to 35%. That’s not a typo. That’s a 29-point swing, from +4 to -25. That kind of cratering in the suburbs is part of why Democrats won the House in 2018, are favored to keep it in 2020, and have made inroads with an unfavorable Senate map. It’s tough to see Trump winning reelection without turning things around in the suburbs.

Overall, these numbers aren’t great for Trump. One saving grace is that his supporters love him — and intensely so. His base is more enthusiastic about voting for him than potential Biden voters are for voting for the former vice president, and that’s a wildcard to watch. But while enthusiasm is important, it doesn’t always translate into more votes. Reelections, after all, are always about the sitting president. Trump may wind up driving out his base, but also Democrats in opposition to him.

5 things to watch this week:

1. Woke up this morning… and there were more elections on Tuesday: There are primaries in two states, New Jersey and Delaware.

The race to watch is in New Jersey’s 2nd Congressional District. Democratic candidates are vying to take on Rep. Jeff Van Drew, who switched parties from Democrat to Republican during Trump’s impeachment. Five Democrats are on the ballot, and the race is largely between Amy Kennedy and Brigid Callahan Harrison. Kennedy, a former educator, is a member of the politically elite Kennedy family. (She’s married to former Rep. Patrick Kennedy.) She also has the endorsement of New Jersey Gov. Phil Murphy. But Harrison has the endorsement of South Jersey power broker George Norcross and state Senate president Steve Sweeney. 2. Trump to Florida, New Hampshire: Want another sign of what the battleground states are? Look at Trump’s travel this week. He’s set to hold a high-dollar — in-person — fundraiser in Florida this week and then head to New Hampshire, where he will hold an outdoor rally Saturday. It’s his first attempt at a rally since his underwhelming (indoor) event in Tulsa, Okla. Trump’s Florida fundraiser is reportedly for $580,600 per couple. Trump and the Republican National Committee trailed Biden and the Democratic National Committee in fundraising, $141 million to $131 million, in June.

3. Awaiting more key Supreme Court decisions: There are more decisions coming from the Supreme Court, as soon as Monday — including on whether Trump can block disclosure of his financial records, and whether lay teachers at parochial schools are protected by the civil rights laws.

4. The Pentagon and protests: The hearing to watch this week on Capitol Hill involves the Department of Defense’s role in civilian law enforcement. Slated to testify Thursday before the House Armed Services Committee are Defense Secretary Mark Esper and Gen. Mark Milley, chairman of the Joint Chiefs of Staff.

Milley last month said he regretted his role in Trump’s walk to the partially burned church across the street from the White House. And Esper broke with the president and said, “The option to use active-duty forces in a law enforcement role should only be used as a matter of last resort, and only in the most urgent and dire of situations. We are not in one of those situations now.”

5. Mexico’s president visits the White House: In his first U.S. trip, Mexican President Andrés Manuel López Obrador will visit Washington Wednesday to commemorate the signing of the U.S.-Mexico-Canada, or USMCA, trade agreement. López Obrador is seen as friendlier to Trump than past Mexican presidents, and they also share another thing in common — a dislike of the media. He wondered aloud this weekend of what he calls the “corrupt media”: “How much are they paid to attack me?”

Quote of the weekend:

“We must now realize the promise of America by trusting God, unifying our vision and building our future.”

— Kanye West announces his 2020 run for president on Twitter on Saturday, which was July 4.

Ennio Morricone, the sound of the American West, dies at 91