These groups, which now boast a collective audience of more than 1 million members, are still thriving after most states started lifting virus restrictions. 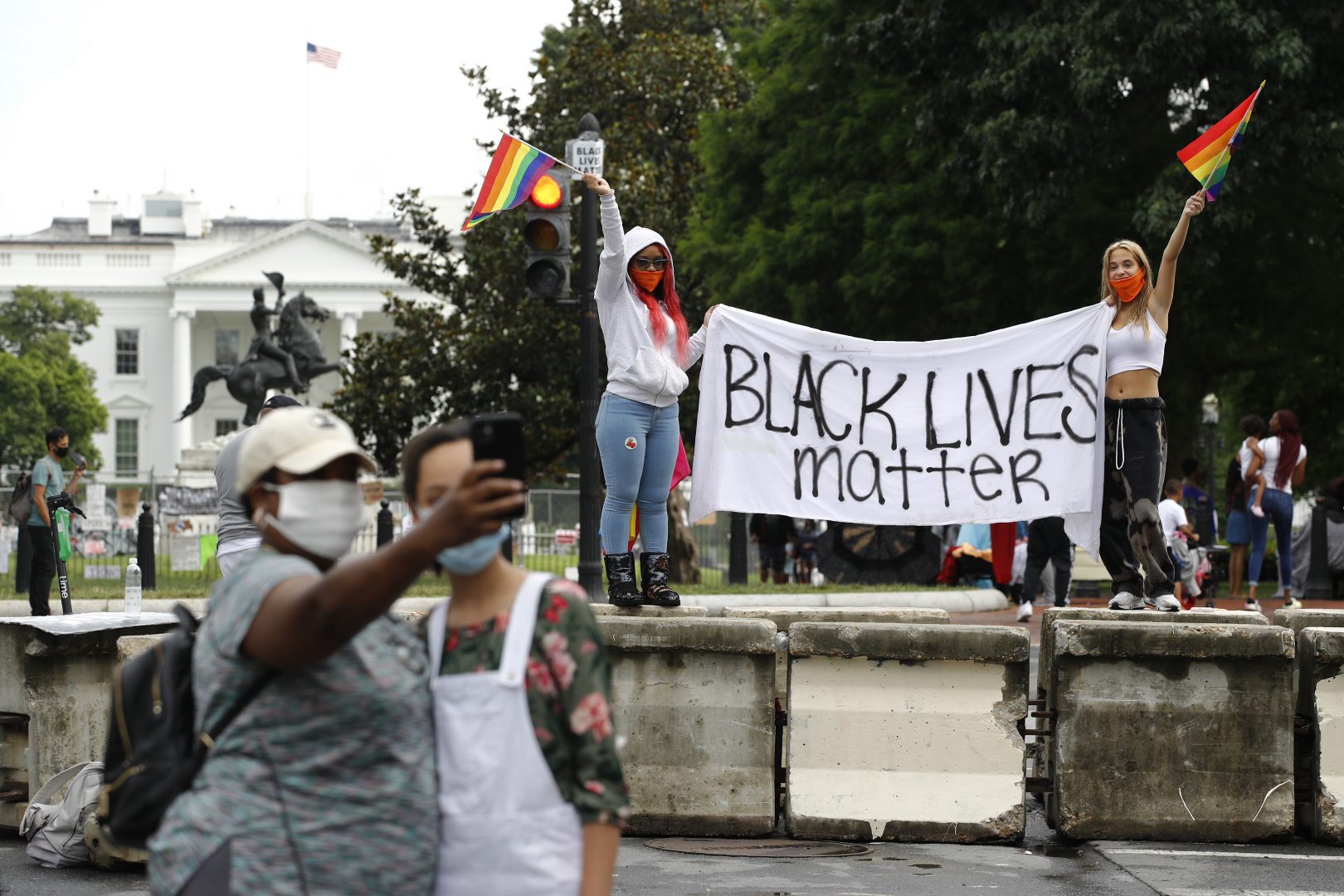 (Chicago) — A loose network of Facebook groups that took root across the country in April to organize protests over coronavirus stay-at-home orders has become a hub of misinformation and conspiracy theories that have pivoted to a variety of new targets. Their latest: Black Lives Matter and the nationwide protests of racial injustice.

These groups, which now boast a collective audience of more than 1 million members, are still thriving after most states started lifting virus restrictions.

And many have expanded their focus. 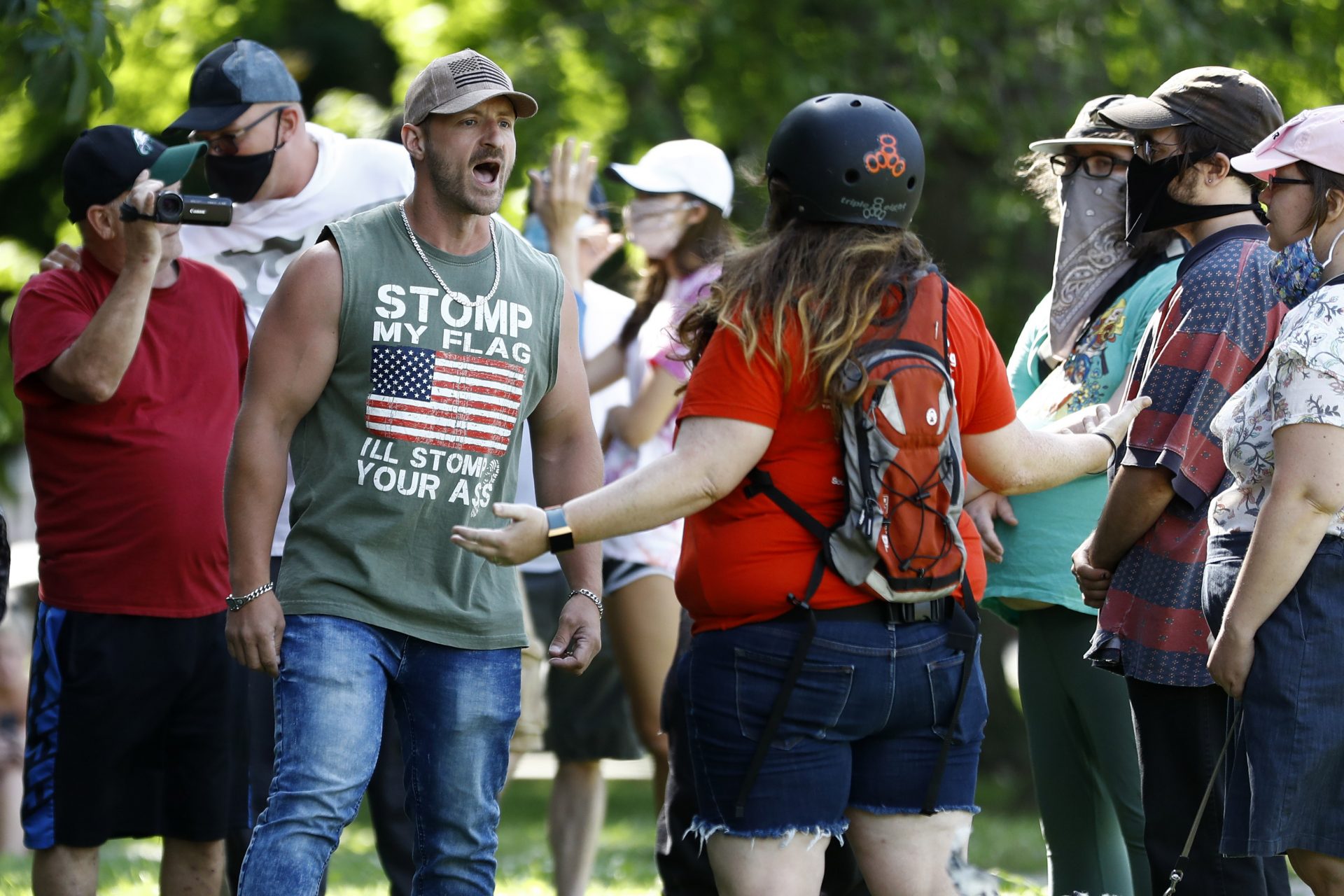 A man yells at a protester near the statue of Christopher Columbus at Marconi Plaza, Monday, June 15, 2020, in the South Philadelphia neighborhood of Philadelphia.

Others have become gathering grounds for promoting conspiracy theories about the protests, suggesting protesters were paid to go to demonstrations and that even the death of George Floyd, an unarmed Black man who died in the custody of Minneapolis police, was staged.

An Associated Press review of the most recent posts in 40 of these Facebook groups — most of which were launched by conservative groups or pro-gun activists — found the conversations largely shifted last month to attacking the nationwide protests over the killing of Black men and women after Floyd’s death.

Facebook users in some of these groups post hundreds of times a day in threads often seen by members only and shielded from public view.

“Unless Facebook is actively looking for disinformation in those spaces, they will go unnoticed for a long time and they will grow,” said Joan Donovan, the research director at the Harvard Kennedy School’s Shorenstein Center on Media, Politics, and Public Policy. “Over time, people will drag other people into them and they will continue to organize.”

Facebook said it is aware of the collection of reopen groups, and is using technology as well as relying on users to identify problematic posts. The company has vowed in the past to look for material that violates its rules in private groups as well as in public places on its site. But the platform has not always been able to deliver on that promise.

Shortly after the groups were formed, they were rife with coronavirus misinformation and conspiracy theories, including assertions that masks are “useless,” the U.S. government intends to forcibly vaccinate people and that COVID-19 is a hoax intended to hurt President Donald Trump’s re-election chances this fall. 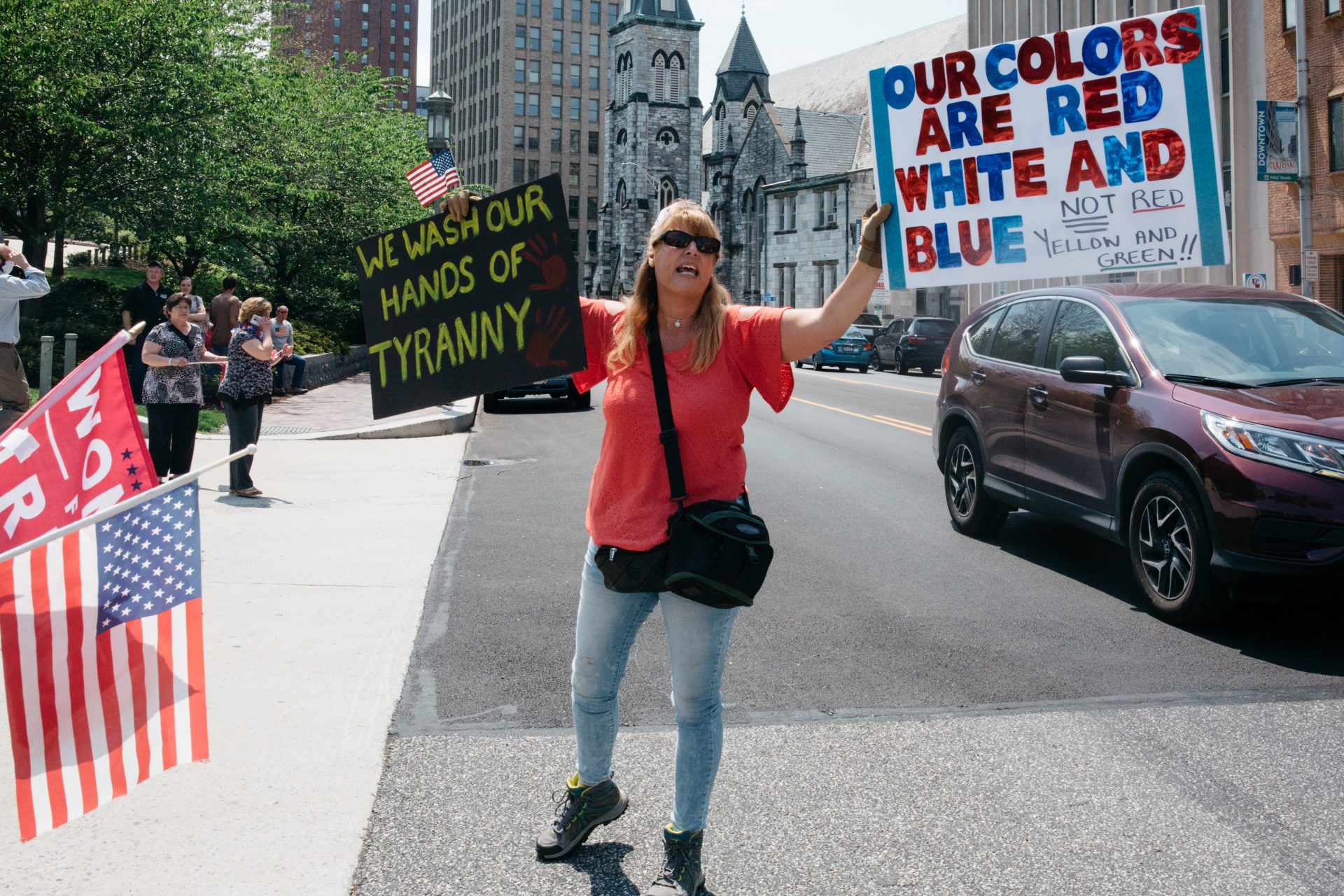 Protesters hold signs during a May 15, 2020, rally outside the state capitol in Harrisburg, Pa. About 1,000 people showed up to protest Gov. Wolf’s coronavirus shutdown order.

Posts in these private groups are less likely to be scrutinized by Facebook or its independent fact-checkers, said Donovan. Facebook enlists media outlets around the world, including The Associated Press, to fact check claims on its site. Members in these private groups have created an echo chamber and tend to agree with the posts, so are therefore less likely to flag them for Facebook or fact-checkers to review, Donovan added.

At least one Facebook group, ReOpen PA, asked its 105,000 members to keep the conversation focused on reopening businesses and schools in Pennsylvania, and implemented rules to forbid posts about the racial justice protests as well as conspiracy theories about the efficacy of masks.

But most others have not moderated their pages as closely.

For example, some groups in New Jersey, Texas and Ohio have labeled systemic racism a hoax. A member of the California Facebook group posted a widely debunked flyer that says “White men, women and children, you are the enemy,” which was falsely attributed to Black Lives Matter. Another falsely claimed that a Black man was brandishing a gun outside the St. Louis mansion where a white couple confronted protesters with firearms. Dozens of users in several of the groups have pushed an unsubstantiated theory that liberal billionaire George Soros is paying crowds to attend racial justice protests.

In the Ohio group, one user wrote on May 31: “The focus is shifted from the voice of free people rising up against tyranny … to lawless thugs from a well known racist group causing violence and upheaval of lives.”

Those two pages are part of a network of groups in Ohio, Wisconsin, Minnesota, New York and Pennsylvania created by conservative activist Ben Dorr, who has for years raised money to lobby on hot-button conservative issues like abortion or gun rights. Their latest cause — pushing for governors to reopen their states — has attracted hundreds of thousands of followers in the private Facebook groups they launched.

Private groups that balloon to that size, with little oversight, are like “creepy basements” where extremist views and misinformation can lurk, said disinformation researcher Nina Jankowicz, a fellow at the nonpartisan Wilson Center, a Washington, D.C., think tank.

“It’s sort of a way that the platforms are enabling some of the worst actors to stay on it,” said Jankowicz. “Rather than being de-platformed — they can organize.”