A crowded street at the Central Pennsylvania Festival of the Arts in State College, Pa. on Saturday, July 13, 2002. The festival ends on Sunday afternoon. (AP Photo/Pat Little)

"We will have a mixture of some live events, and some sort of private links to see entertainers that we would have normally had here at the festival." 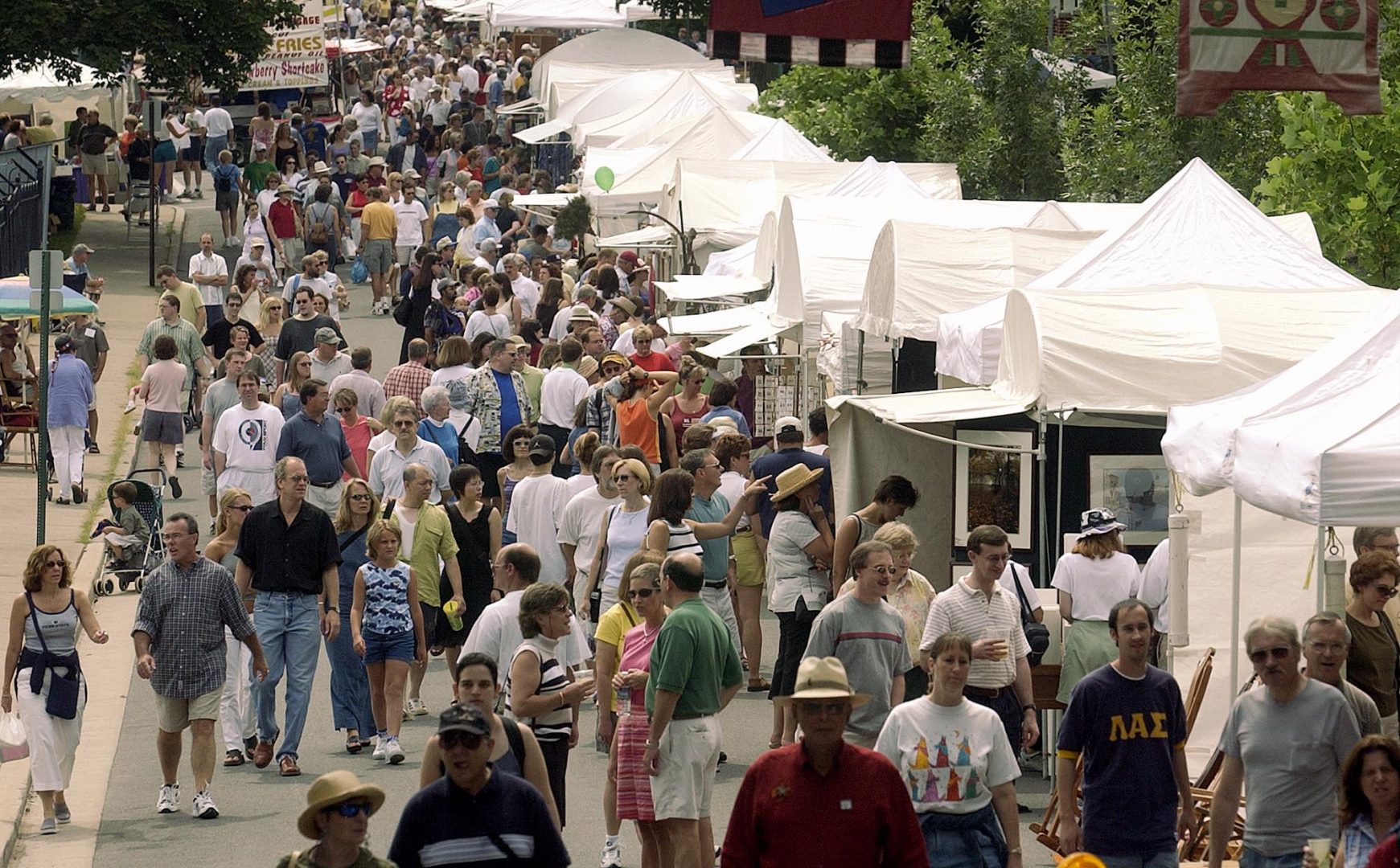 A crowded street at the Central Pennsylvania Festival of the Arts in State College, Pa. on Saturday, July 13, 2002. The festival ends on Sunday afternoon. (AP Photo/Pat Little)

(State College) — In some parts of central and northern Pennsylvania, arts festivals are a summer tradition. But 2020 has been a tough year for festivals. As the COVID-19 pandemic took shape, many such events were canceled.

Rick Bryant, director of the Central Pennsylvania Festival of the Arts in State College, estimates that 99% of arts festivals around the country are canceled this summer.

But festival fans can take heart. This summer you can attend three local arts festivals from the comfort of your couch. Including the arts festival usually held in July in State College. It will take place on the usual dates, July 9 -12, but it will be online.

“Most of the activity will take place on our website, arts-festival.com,” Bryant said. “And the sidewalk sale will open at 10 in the morning on Thursday, just like it does every year.”

But, doing a festival online rather than in-person doesn’t mean it’s less stressful.

“I think petrified would be the word,” Bryant said. “You know, every year when we have the real festival, believe it or not, I really do worry like, will people really come to this?”

The Central Pennsylvania festival had, like most arts festivals, already selected its artists by jury this past winter. Most, but not all of those artists will be able to participate in the virtual arts fest.

“To move to an online event, we decided that it had to be artists who had some sort of online commerce portal, be it a website, an Etsy store, or something similar to that,” Bryant said. “And so that brought us down to a pool of about 240 artists.”

Bryant said there are also some musicians participating in the virtual festival, including the folk band Trout Fishing in America, the famous Scottish fiddler Alasdair Frasier and several local acts.

“We will have a mixture of some live events, and some sort of private links to see entertainers that we would have normally had here at the festival,” Bryant said.

This year’s Central Pennsylvania Festival of the Arts even has a fitting version of its traditional poster. It depicts a sunrise over a stylized green landscape. For the location, it says “happening wherever you are.”

“Since 1974, they’d said ‘downtown State College and the Penn State campus,’ and this was the year that that wasn’t true,” Bryant said. “So we had to come up with a different tag line – so it’s as far away as your laptop, your tablet, or your phone, really.”

One thing this year’s virtual Central Pennsylvania Festival of the Arts won’t have is a Children and Youth day.

“Because putting kids online is just not cool,” Bryant explained.  “But we wanted to have a creative outlet for kids.”

Enter friendship bracelets: something Bryant said you could always find for sale on kids day at arts fest.

“We’re encouraging people to make friendship bracelets, and give some to people in their immediate support system — people who’ve helped them out during our sort of shelter-in-place life here in the spring –and then give the rest to the Arts Festival.  We’ll sell them downtown and on our website, as we normally sell festival buttons to support the activities of the festival.”

Bryant says there are instructions on how to make a friendship bracelet on the Central Pennsylvania Festival of the Arts website.

Meanwhile, The People’s Choice Festival of Pennsylvania Arts, usually held in Boalsburg, is in the same uncharted territory with their virtual festival, July 9 through 12.

“We’re setting up a website that visitors will be able to go to, and look at all the vendors’ products that were going to be at the festival this year,” said John Madison, co-direcot of the People’s Choice Festival. He says the 2020 website will include a map of the virtual festival grounds.

“And there will be little boxes on it that you’ll be able to click and go to the artist that you’re looking for. It’ll take you right to their website, their Facebook page, their Instagram site – you know, wherever they’re doing business now.”

Madison says artists were selected back in January for this year’s People’s Choice Festival.  About 100 of them will be participating in the virtual festival, where he says you will be able to buy their work online.

“It will pretty much be just like you can go to the festival, but you can do it at home,” Madison said.

In Kane, Pennsylvania, the annual Art in the Wilds juried fine art festival is taking a different approach. It’s holding an extended virtual festival that launched in June and continues through September 1st on the Art in the Wilds Website. Assistant director Merry Ryding says all their invited artists were asked to be part of the online festival.

“If they’d been juried in, they’re automatically in the virtual show if they choose to participate.  We also are extending their juried status to next year. So they’ll automatically be in for hopefully a live show in 2021.”

“We’re up here in Northern Pennsylvania, part of the PA Wilds, so we kind of look for things that would kind of fit with that. So we have painters that do wildlife, photographers of wildlife.  And then a lot of the woodworking is using – -some of it is using local hardwoods. We have a good variety in our show.”

The Art in the Wilds Festival; The Central Pennsylvania Festival of the Arts; and the People’s Choice Festival of Pennsylvania Arts are hoping for some good online crowds this year.  And they all hope to be bustling hubs of summertime fun once again in 2021.