Boaters gather at the confluence of the Allegheny, Monongahela and Ohio Rivers in downtown Pittsburgh, Friday, June 26, 2020.

“The trend among new cases remains consistent. They are younger people who traveled out of state or who visited bars and restaurants in and around the county.”

(Harrisburg) — With a spike in coronavirus cases expected to continue growing, Allegheny County, home to Pittsburgh and 1.2 million residents, imposed a one-week shutdown of bars and restaurants and all gatherings of more than 25 people starting Friday.

The order is to take effect after midnight Thursday, the county’s health director, Dr. Debra Bogen, said, ahead of the July Fourth holiday when health officials fear that the virus will spread through packed holiday celebrations.

On Twitter, Lt. Gov. John Fetterman, who lives in Allegheny County, called Thursday’s figure “truly alarming.” Allegheny County officials said the increase was larger than expected and that they expected another significant increase in Friday’s report.

Health officials in Philadelphia and Allegheny County say they are finding that many of the people testing positive are describing socializing in bars and returning from beach vacations and travel to coronavirus hot spots in other parts of the U.S.

“The trend among new cases remains consistent,” Allegheny County said of the hundreds of cases that health personnel have investigated in recent days. “They are younger people who traveled out of state or who visited bars and restaurants in and around the county.”

In addition to bars and restaurants, the order also shuts down the county’s only casino. However, it allows take-out and delivery service.

The move is perhaps the most severe measure taken since Gov. Tom Wolf, a Democrat, began relaxing his pandemic restrictions in stages across Pennsylvania, including a stay-at-home order, two months ago.

Wolf’s administration on Wednesday expanded his mask-wearing order to help suppress outbreaks, drawing harsh criticism from Republican lawmakers that he is acting like a dictator and complaints that it is exposing business owners to lawsuits.

It also reported another 25 coronavirus-related deaths for a statewide total of 6,712 since early March.

While Pennsylvania’s hospitalizations for the virus are below where they were a week ago, according to state statistics, an Associated Press analysis of state data shows the percentage of people testing positive has risen in the past week. 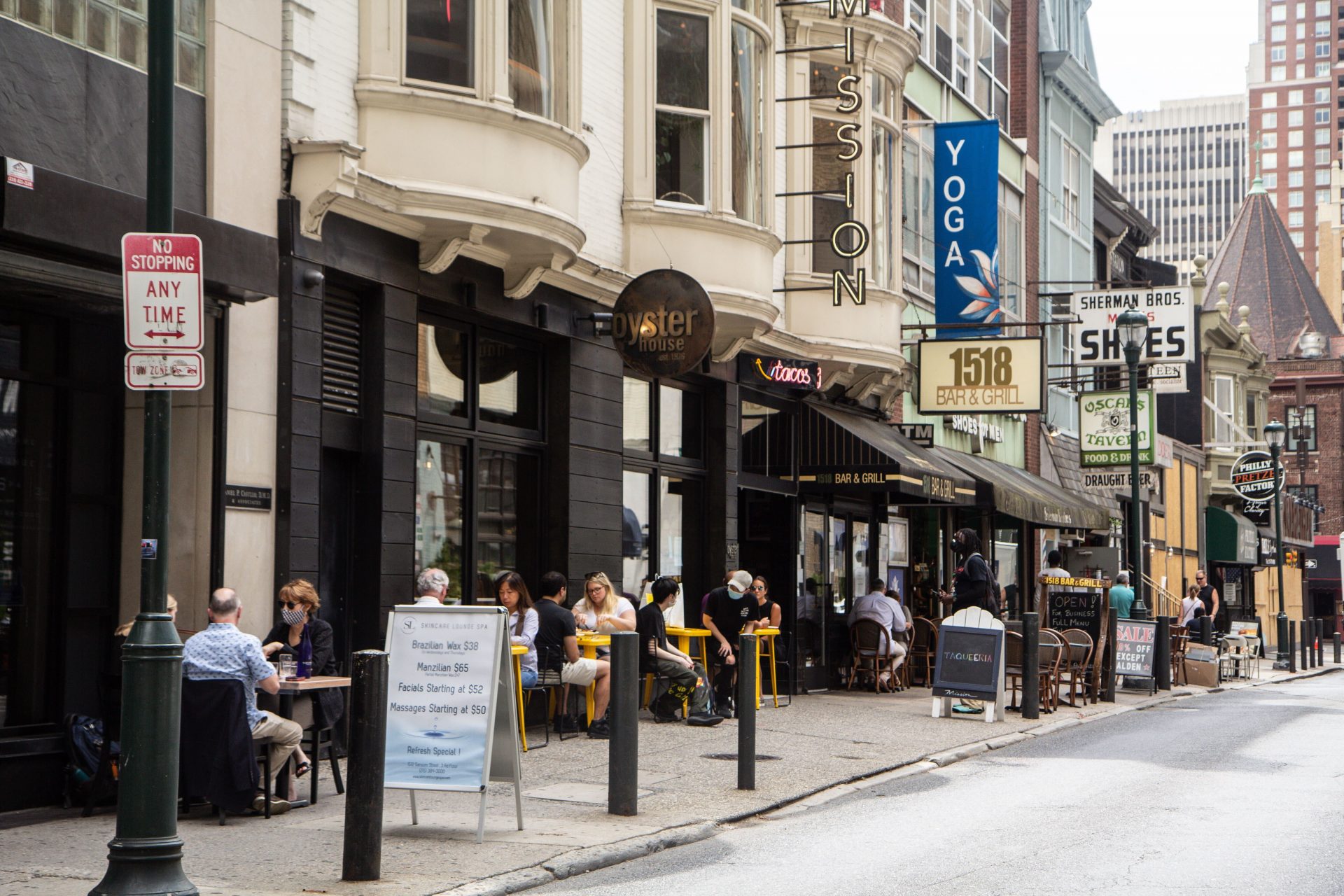 Dining in Philadelphia will remain outdoor seating only for now.

Allegheny County’s percentage of positive tests and hospitalizations are on the rise.

The county, Pennsylvania’s second-most populous after Philadelphia, had avoided the higher case counts that hit Philadelphia and much of eastern Pennsylvania in the spring. But over the weekend, Allegheny County officials ordered a halt to drinking alcohol in bars and restaurants in response to a spike in positive tests.

In an interview on KDKA-AM radio in Pittsburgh on Thursday, Gov. Tom Wolf’s top health adviser, Health Secretary Rachel Levine, was asked if now is the time is try herd immunity.

She said no, warning that the disease can make even younger adults very sick.

“We know that significant numbers of people get very sick from the virus, not just seniors, but younger adults as well, in their 20s, 30s and 40s, and that would overwhelm the hospitals,” Levine said.

It also would lead to more cases in nursing homes, Levine said, citing academic researchers who found that outbreaks in nursing homes are driven most by how widespread the virus is in the community around it.

The state needs to contain the virus using prevention measures, such as mask-wearing, and targeted efforts to tamp down outbreaks until treatment methods or a vaccine is developed, Levine said.

Of the hundreds of cases Allegheny County health authorities have begun investigating since June 20, the median age is 27 and three-fourths are 19 to 49 years old, the county said.

As if to underscore Levine’s point, among the 31 new hospitalizations since June 20 are seven people in their 20s and 30s, it said.

Many of the newly infected reported visiting bars, restaurants and night clubs where neither customers nor employees wore masks or practicing physical distancing, it said.

Many also reported traveling to out of state, including to beach towns in the Carolinas and Florida.

While the state’s hospitalizations for the virus have continued to fall, officials said the percentage of people testing positive has been rising the last two weeks.

Allegheny County reported more than 230 new coronavirus cases Wednesday, a day after it reported a single-day high of 110.

“While an increase in the number of cases was expected — this is larger than expected,” county officials said in a statement. “The expectation is that the numbers will also significantly increase again tomorrow.”

On Twitter, Lt. Gov. John Fetterman, who lives in Allegheny County, called Thursday’s figure “truly alarming.” The county’s percentage of positive tests and hospitalizations are also on the rise.

County health authorities say the median age of the people testing positive is 29. They are asking residents to consider postponing plans to travel to a coronavirus hot spot, and to self-quarantine for 14 days and get tested when returning.

The county, Pennsylvania’s second-most populous after Philadelphia, had avoided the higher case counts that hit Philadelphia and much of eastern Pennsylvania in the spring. But over the weekend, Allegheny County officials ordered a halt to drinking alcohol in bars and restaurants in response to a spike in positive tests.

One day after the Wolf administration expanded the state’s mask order, the Pennsylvania Medical Society is stressing the importance of wearing masks in public.

“The recent resurgence of COVID-19 in other states should serve as a reminder to Pennsylvanians that this pandemic is far from finished,” said Dr. Lawrence John, president of the Pennsylvania Medical Society. “The Pennsylvania Medical Society (PAMED) believes CDC guidelines offer the most effective way to slow the spread of COVID-19. An important part of these guidelines includes wearing masks, or face coverings, in public when other social distancing measures are difficult to maintain.”