Here for the All Star Baseball Game, the Big Three of baseball confer on last minute details in Boston on July 6, 1936. Left to right: Ford Frick, President of the National League; Judge Kenesaw Mountain Landis, High Commissioner of Baseball; and William Harridge, President of the American League.

No Blacks played in the majors during his quarter-century tenure as commissioner of baseball. 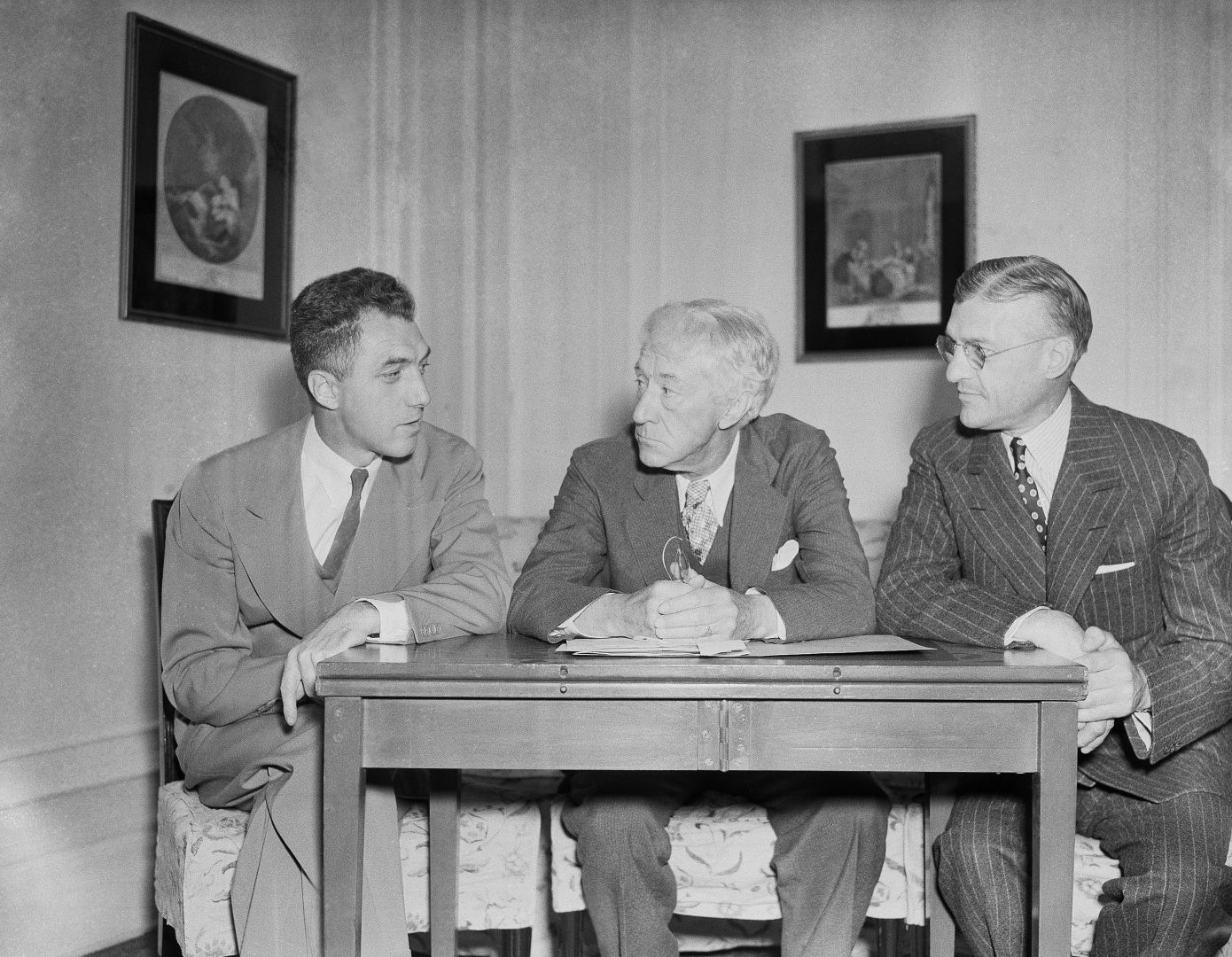 Here for the All Star Baseball Game, the Big Three of baseball confer on last minute details in Boston on July 6, 1936. Left to right: Ford Frick, President of the National League; Judge Kenesaw Mountain Landis, High Commissioner of Baseball; and William Harridge, President of the American League.

(New York) — Something still bothers Barry Larkin about his Most Valuable Player award.

The other name engraved on the trophy: Kenesaw Mountain Landis.

“Why is it on there?” said Larkin, the Black shortstop voted National League MVP in 1995 with the Cincinnati Reds.

“I was always aware of his name and what that meant to slowing the color line in Major League Baseball, of the racial injustice and inequality that Black players had to go through,” the Hall of Famer said this week.

Hired in 1920 as the sport’s first commissioner to help clean up rampant gambling, Landis and his legacy are “always a complicated story” that includes “documented racism,” official MLB historian John Thorn said.

This much is true, in black and white: No Blacks played in the majors during his quarter-century tenure. Jackie Robinson broke the barrier in April 1947, about 2 1/2 years after Landis died.

“Landis is a part of history, even though it was a dark history,” Houston Astros manager Dusty Baker said. 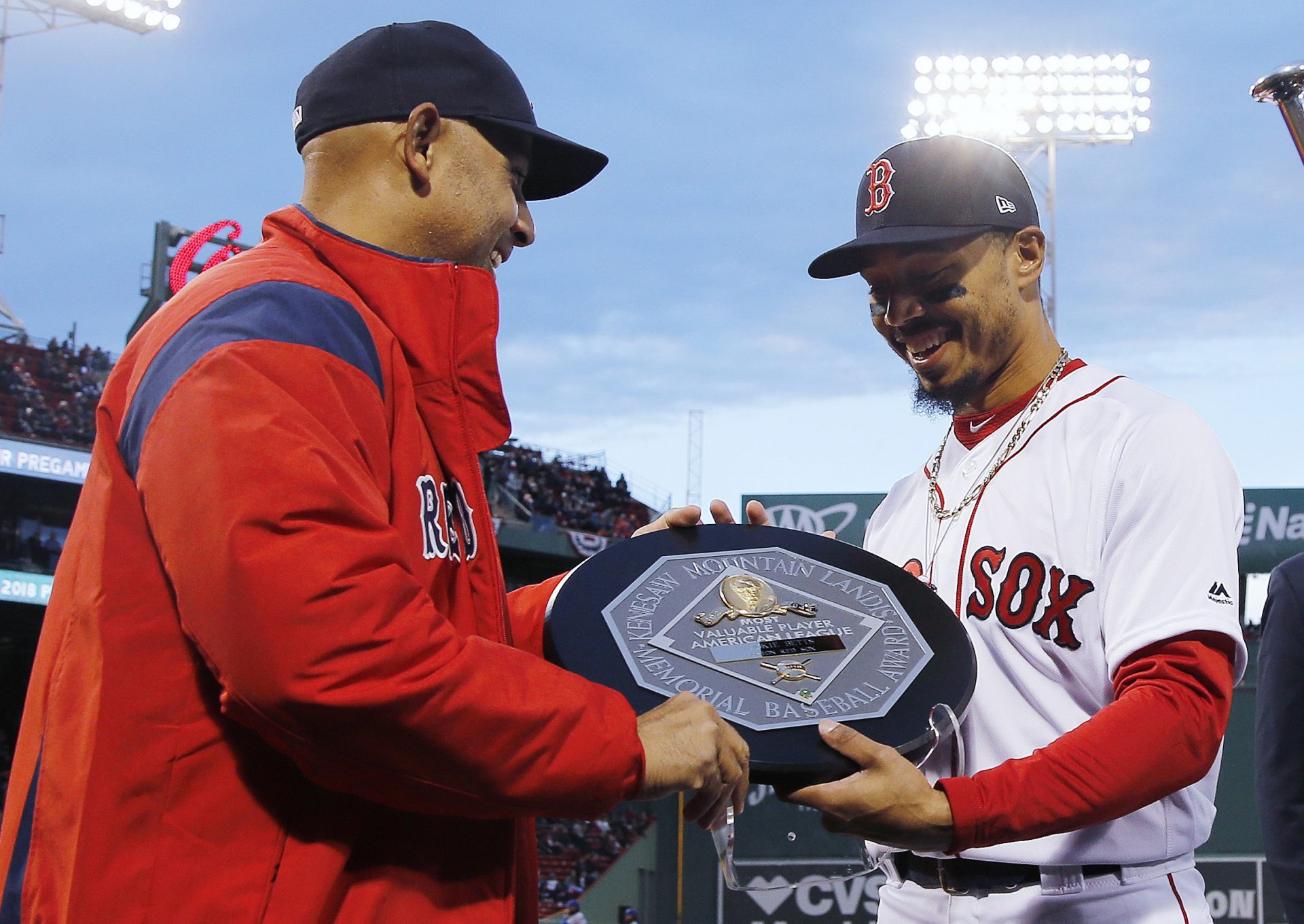 FILE PHOTO: In this April 11, 2019, file photo, Boston Red Sox manager Alex Cora, left, presents right fielder Mookie Betts with the 2018 AL MVP Award before a baseball game between the Red Sox and the Toronto Blue Jays at Fenway Park in Boston. The award includes the name and image of Kenesaw Mountain Landis.

Fact is, few fans realize Landis’ name is plastered all over the Most Valuable Player trophies. Most people just call it the MVP.

But there it is, prominently displayed on every American League and NL MVP plaque since 1944 — Kenesaw Mountain Landis Memorial Baseball Award, in shiny, gold letters literally twice as big as those of the winner.

With a sizable imprint of Landis’ face, too.

“If you’re looking to expose individuals in baseball’s history who promoted racism by continuing to close baseball’s doors to men of color, Kenesaw Landis would be a candidate,” three-time NL MVP Mike Schmidt of Philadelphia said.

“Looking back to baseball in the early 1900s, this was the norm. It doesn’t make it right, though,” said the Hall of Famer, who is white. “Removing his name from the MVP trophy would expose the injustice of that era. I’d gladly replace the engraving on my trophies.”

Added 1991 NL MVP Terry Pendleton of Atlanta, who is Black: “This is 2020 now and things have changed all around the world. It can change for the better.”

“Statues are coming down, people are looking at monuments and memorials,” he said. “We need to get to the bottom of things, to do what’s right. Yes, maybe it is time to change the name.”

“I’ve always thought about that, why is that still on there?” Pendleton said. “No doubt, MVP stands on its own. It doesn’t need a name.”

How Landis got etched into the list is easy to trace.

A federal judge in Chicago, Landis quickly established his powerful authority as commissioner, banning Shoeless Joe Jackson and the Black Sox for throwing the 1919 World Series.

In 1931, Landis decided members of the Baseball Writers’ Association of America would pick and present the MVP awards. Before that, the leagues had their own mishmash system.

Then during the 1944 World Series, the BBWAA voted to add Landis’ name to the plaque as “an acknowledgement of his relationship with the writers,” longtime BBWAA secretary-treasuer Jack O’Connell said.

A month later, Landis died at 78. He soon was elected to the Hall of Fame.

“Landis is who he is. He was who he was,” Thorn said. “I absolutely support the movement to remove Confederate monuments, and Landis was pretty damn near Confederate.” 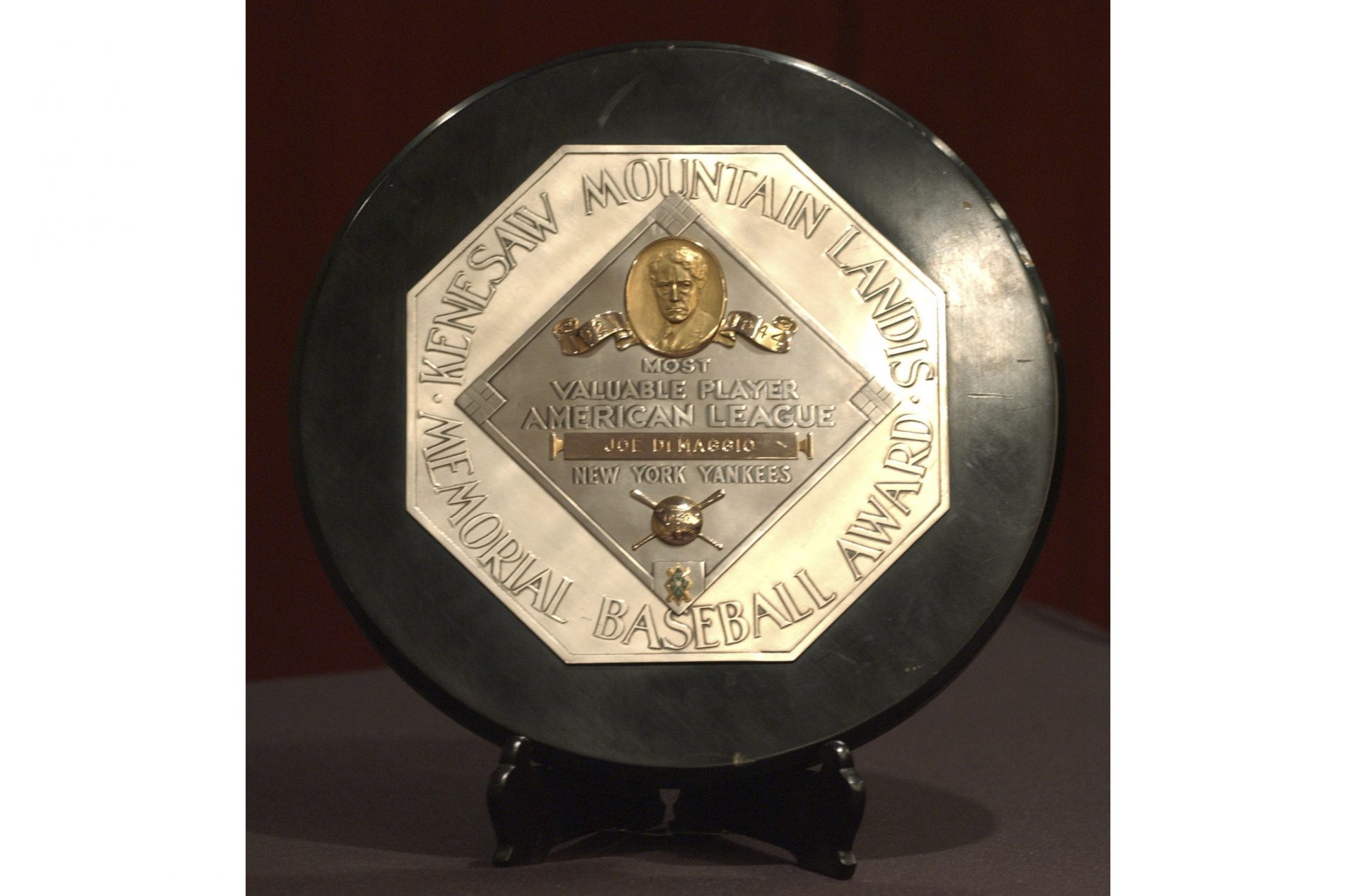 FILE PHOTO: In this Jan. 22, 2006, file photo,a Joe DiMaggio 1947 MVP Award Plaque is displayed at a news conference in New York. The plaque features the name and image of Kenesaw Mountain Landis.

Landis’ father, however, was a Union Army surgeon wounded in the Civil War at the battle of Kennesaw Mountain in Georgia, which became the inspiration for the commissioner’s unique name. Born two years later in Ohio — with a slight tweak on the spelling of the mountain — Landis spent time in Indiana and rose to prominence in Chicago.

His precise role in racial issues has been debated for decades.

Landis broke up exhibitions between Black and white All-Star teams. He invited a group of Black newspaper publishers to address owners in what became a cordial but totally fruitless presentation.

Toward the end of his tenure, he told owners they were free to sign Black players. But there is no evidence he pushed for baseball integration, either, as the status quo of segregation remained.

“If you have the Jackie Robinson Award and the Kenesaw Mountain Landis Award, you are at diametrically opposed poles,” Thorn said. “And it does represent a conundrum.”

O’Connell said no MVP had voiced a complaint to him about Landis since taking his post in 1994. He said Landis’ name on the plaque wasn’t pledged or part of the BBWAA constitution.

Any BBWAA member could raise an objection to Landis’ presence. Normally, that would be discussed at the organization’s next gathering, currently scheduled for December at the winter meetings in Dallas. The coronavirus pandemic has put most everything-baseball related in peril — a 60-game season is set to begin in late July, and MVPs are usually announced in November.

O’Connell said if someone raised the issue now, it could be brought up to the board and opened to discussion and a vote. To pull Landis’ name “would be a simple matter of redesigning the plaque,” he said.

To Larkin, that would remove the tarnish from the trophy.

Larkin recalled that shortly after he was voted MVP, he got a call from two-time NL MVP Joe Morgan. The star Black second baseman of the Big Red Machine talked about Landis’ legacy and “he said it never sat well with him, having that name on there,” Larkin recalled.

“His name should not be represented on a plaque or award of honor, especially at this day and time,” he said. “If his name was taken off, I would not be opposed to it at all.”