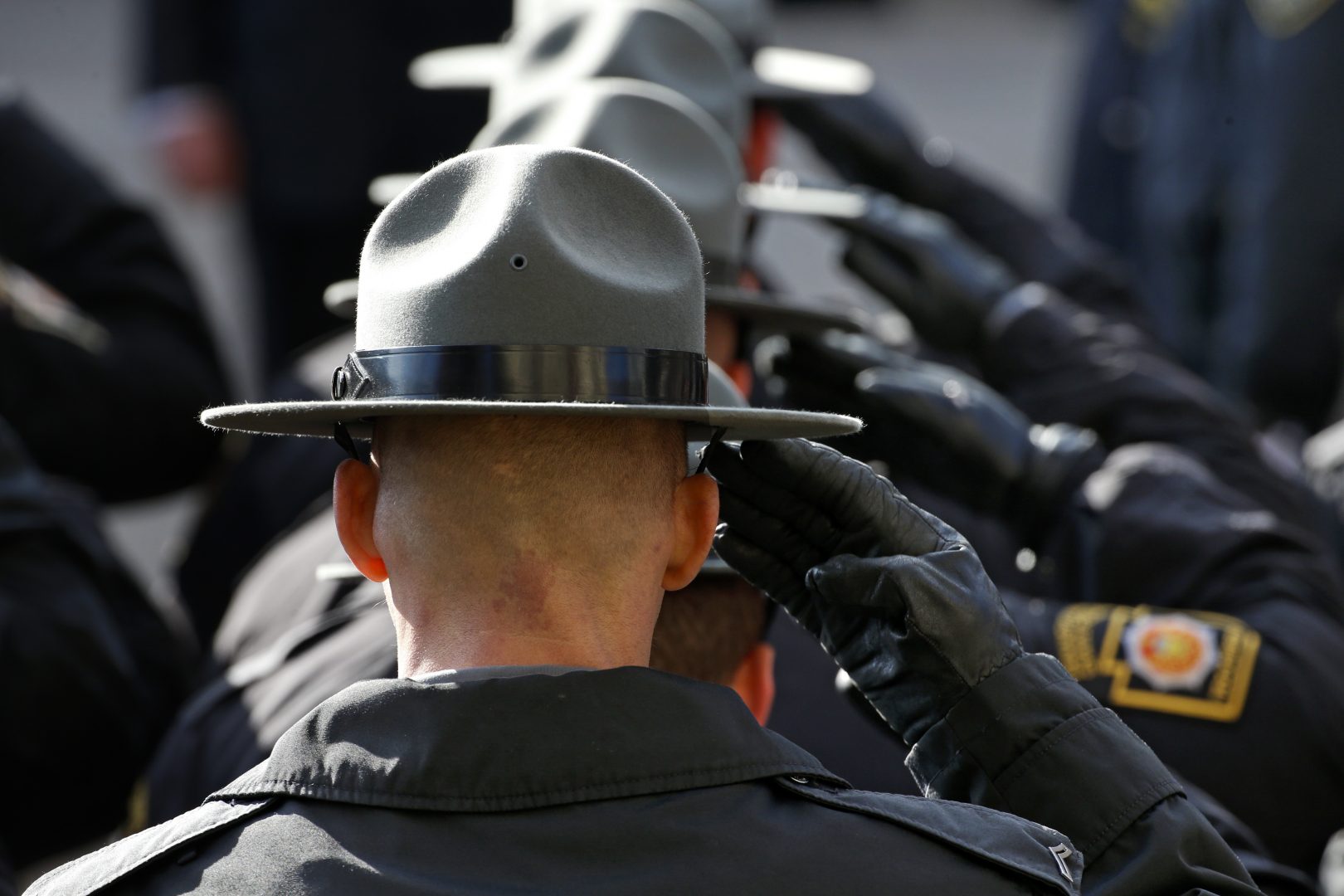 After more than two decades of relying on the Pennsylvania State Police to provide coverage to the small borough, Abbotstown – with a population of just over 1,000 – started its own one-man police force in January.

“People in the area were asking for local coverage,” said Borough Manager David Bolton. “I did the research and the budgeting to establish a police department. We recruited a chief who would be our code enforcement officer. And he was the former commander at our PSP barracks.”

It’s only part-time: The “department” is available 20 hours a week and only enforces municipal codes. But it was a step away from full reliance on the state troopers who provided coverage to the area for criminal matters.

Abbottstown is different from many of Pennsylvania’s smaller towns, which have moved in the opposite direction by dismantling their own local police departments (citing financial concerns) and instead now rely solely on PSP.

But despite having a part-time police force, Abbottstown borough still relies on PSP for criminal matters. Troopers still have to respond to serious crimes, such as domestic violence calls and assaults, as well as less serious, non-violent infractions.

That kind of coexistence between municipal and state police is common throughout the state. Almost a quarter (1,725) of the state’s boroughs, towns and cities are patrolled by troopers in some capacity beyond their mandate to police the highways.

But some Democratic lawmakers have been critical of those governments for dismantling a community police force. And as people in more cities and towns in rural counties across the state engage in protests against the police – and specifically call for defunding police departments – there is a question of what defunding the state police would look like.

The problem State Police officials say they’d face would be existential: Less money means less officers to police areas that they’ve been forced to cover as a result of local governments’ actions.

– Brandi Fisher, president and CEO of Alliance for Police Accountability

To the heart of the issue is police engagement within a community. Pennsylvania State Police, because they’re a statewide force covering multiple municipalities, won’t always live in the towns they cover. Criminal justice reformers and politicians point to that as a problem, and say that officers need to have a stake in their neighborhoods, a practice called “community policing” that is widely regarded as a way to lower crime while increasing trust in law enforcement.

Last week during testimony in front of the Senate Law & Justice and Judiciary committees, advocates and lawyers said that without community policing or an option to redistribute funds away from law enforcement and into social programs, police are being asked to do too much.

“Lack of funding has caused some of this problem,” said Sen. James Brewster (D-Allegheny), who said during the hearing that police used to be able to walk around their neighborhoods and get to know people within their communities. Now, “they just respond to calls,” he said.

Legislators in the past have recognized police mistrust from overpoliced communities, and have increased money for body cameras, implemented more training and even approved larger cadet classes for the State Police. (Those funds for more police have partially been offset by the Motor Vehicle Fund – meant for maintaining roads and bridges – which is financed by various Department of Transportation fees and taxes.)

State Police say they’re already squeezed for funds, and that in the past five years they’ve done overhauls of their training based on a federal task force’s findings on how to train police under the Obama administration’s guidelines.

And while critics argue that legislation and increased training hasn’t solved the problem of structural racism within the state police department, a handful of bills proposed in the Senate aim to place more accountability on state and municipal police.

“It doesn’t solve all the issues, but anything that we can do to restore trust I think we should do so,” Haywood said in an interview.

The bills proposed include appointing a special prosecutor within the Attorney General’s office that would oversee police misconduct. Haywood proposed the legislation alongside Sen. Camera Bartolotta (R-Washington). 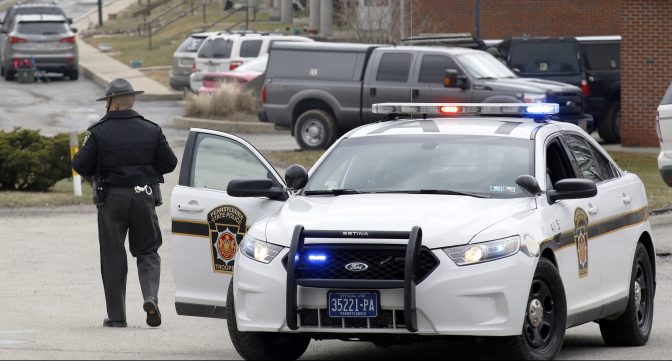 Pennsylvania State Police block the road to an apartment complex where a man barricaded himself, in Hempfield, Pa. Hempfield is one of 1,725 municipalities that rely on some form of coverage by the state police instead of local law enforcement.

But legislation is the same as empty promises for activists and abolitionists who have heard similar arguments and push for legislation in the past. And while they are good ideas for the long term, they don’t address the immediate needs of communities of color, said Brandi Fisher, president and CEO of Alliance for Police Accountability, an advocacy group in Pittsburgh.

“These ideas increase funds, but don’t increase public safety,” said Fisher, who is a proponent of defunding police departments and pushing those funds to social programs. She also testified at the hearing last week over video conference.

But defunding the state police is not very likely, and wildly unpopular among legislators.

Haywood, without taking a stance for or against less funding, said that because of the economic downturn caused by the coronavirus shutdown, he doesn’t see state police “getting more money, but I don’t see [their budget] getting cut dramatically.”

And members of the Pennsylvania State Police, along with leaders in state police unions and fraternal orders, say that cutting funds ultimately means cutting personnel, which only harms municipalities that don’t have a dedicated police force.

“Perhaps the discussion we should be having is not to defund the police and move that money towards social services, but look at the augmentation with social services.”

Since 2013, more than 30 townships and boroughs have cut their departments and started to rely on State Police coverage for criminal matters.

Scott Price, deputy commissioner of operations for PSP, said that cutting people from the State Police would hamper coverage of areas, especially as more municipalities start using PSP for full time coverage. Price said the arguments to defund the police are “vague,” and ultimately boil down to slashing people, not increasing services.

“Perhaps the discussion we should be having is not to defund the police and move that money towards social services, but look at the augmentation with social services,” he said, explaining that police should be working in tandem with welfare workers, domestic violence groups and children services, rather than acting as the default first responder.

The problem, Price recognized, is that rural townships and counties are not well equipped even to handle basic criminal investigations, which then get dumped on State Police.

“You look at what we do with our personnel, and what we provide versus what local police can support, there are many things that local police just can’t do,” he said, referring to the force’s ability to cover larger areas or run forensic labs.

Towns that dismantled their police have saved tens of thousands of dollars each year in personnel and administrative charges that come with a police force, but that cost is then shifted over to the state’s Motor Vehicle Fund, which is being used partially to offset the costs for State Police operations.

This past budget season, Gov. Wolf proposed a funding model in the annual budget that would make sure every town and city pays a share in financing PSP. The model is an algorithm that sets the tax burden based on median income of the county, usage of the PSP and population totals.

But the state police shouldn’t be providing those services to towns and cities in the first place, says Rep. Mike Sturla (D-Lancaster). In a call, Sturla said that municipalities need to have their own police force and stop relying on the Pennsylvania State Police. He argued PSP should be similar to California Highway Patrol, only getting involved if crimes range across multiple districts or when forensic labs are needed.

Townships have eliminated their police departments only to increase taxes elsewhere, he said, and by using PSP in lieu of community police, officers have only made trust among police worse.

“Unfortunately those kinds of municipalities aren’t defunding their police so they can hire social workers,” he said. “They in essence take money away from a local police officer who may understand those local situations because they are community police officers.”