PPD Capt. Louis Campione during the standoff at Marconi Plaza on Saturday.

The move is one of several command-level changes in the department amid the third week of protests over police accountability.

(Philadelphia) — The Philadelphia Police Department has reassigned a South Philly police captain who came under fire for his handling of the Christopher Columbus statue demonstrations in Marconi Plaza.

The move is one of several command-level changes in the department amid the third week of protests over police accountability that followed the killing of George Floyd by Minneapolis police.

PPD Capt. Louis Campione was caught on camera arguing with a man taping the protests and drew criticism over other videos showing a group of armed neighbors assaulting protestors. Police spokesperson Sekou Kinebrew confirmed that the 43-year veteran was reassigned from command of South Philly’s 1st Police District on Monday.

Campione, who led the 1st District since 2010, was reassigned to the Standards and Accountability unit, which is charged with auditing certain department functions. His replacement is Capt. Samantha Brown, formerly of the department’s Internal Affairs Bureau, which investigates police misconduct.

Posts on social media indicated that some in the neighborhood intended to hold a rally in support of Campione on Tuesday afternoon in Marconi Plaza, where the city has erected a protective box around the Columbus statue.

Kinebrew described the reassignment as part of a larger shakeup of top PPD brass that took place Monday, but gave no particular explanation for the reshuffling.

“Command-level changes are not uncommon,” Kinebrew said. “The changes were not related to any specific event or circumstance.” 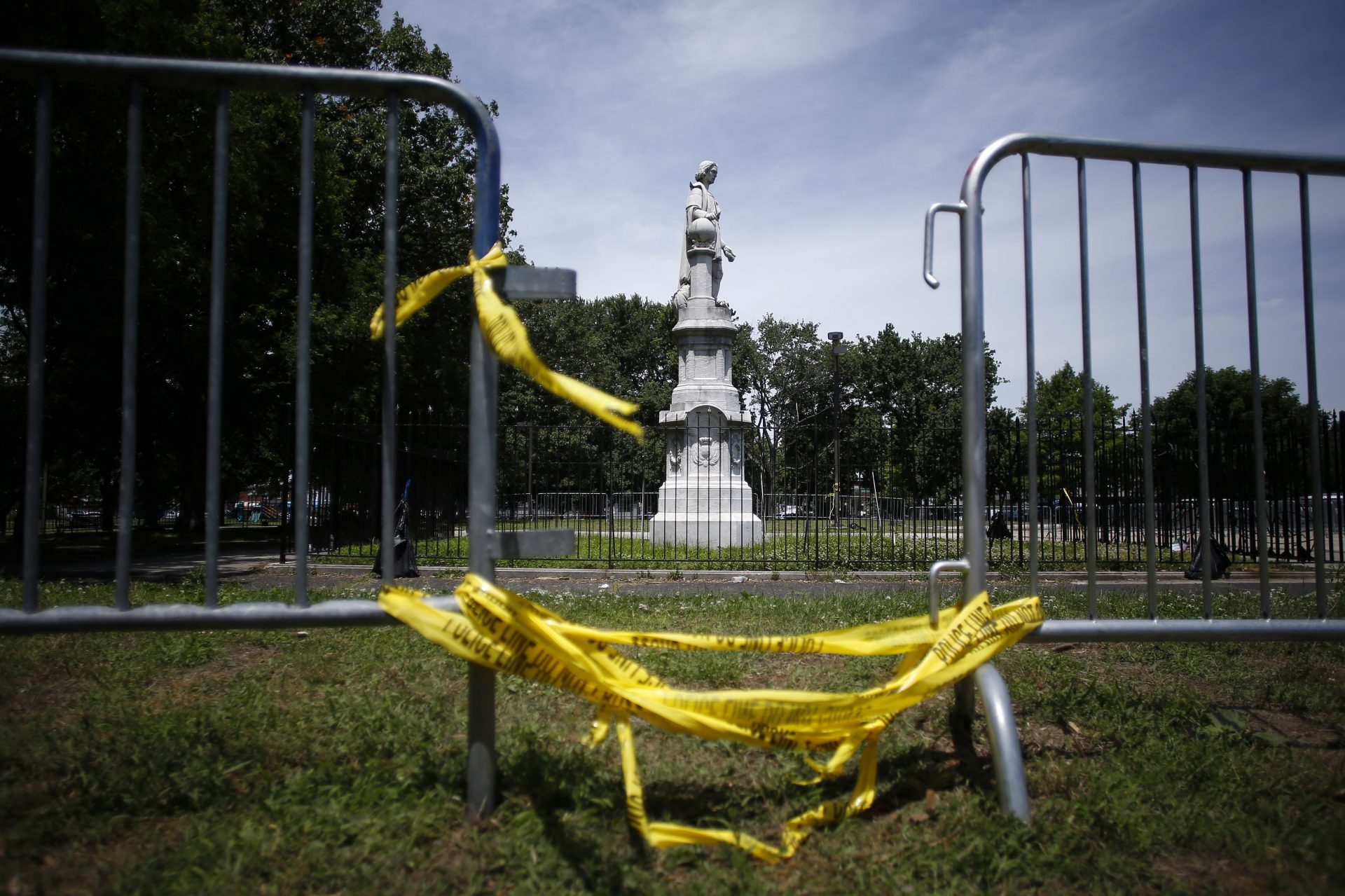 A statue of Christopher Columbus is seen behind barricades at Marconi Plaza, Monday, June 15, 2020, in the South Philadelphia neighborhood of Philadelphia.

Police sources, speaking on the condition of anonymity, said the move was predicated internally on apparent violations of a loose guideline dictating officers should not live in the same districts they patrol.

Some observers, like Henry Di Antonio from the Broad Street West Civic Association, said they were told Campione was being replaced not because of where he lived but due to “an incident in Marconi Plaza” –– referring to happenings during recent demonstrations over the Columbus statue.

The PPD also abruptly replaced Captain Adam Friedman, who lived in Northeast Philadelphia’s 8th Police District, where he was commander for six years. His position will be filled by Lieutenant Timothy Linneman, who also once worked in Internal Affairs.

Henon decried the loss of a captain he characterized as a “tireless” public servant with strong ties to the community.

“It appears they only got rid of Captain Friedman to get at Campione,” the councilmember said. “It’s disappointing news that we have to lose a good captain in the 8th District because of a lack of leadership within the department.”

Campione came under the spotlight on Saturday after he instructed a reporter from the left-wing nonprofit news organization Unicorn Riot to leave the scene or risk being arrested for “inciting a riot.”

We are no longer able to document the ongoing, escalating Marconi Plaza South Philadelphia vigilante incident after @PhillyPolice ordered us to leave or be arrested. We were told we no longer had the right to document this event. pic.twitter.com/U6kRm7owXl

In a video posted around 9 p.m., a face-masked Campione can be seen giving reporter Chris Schiano three warnings to disperse.

“Obviously, this is a volatile situation and you’re aggravating the situation,” Campione said. Schiano identified himself as a reporter, and asked the police captain to clarify that he was asking a member of the press to leave a public demonstration.

“I’m asking you to leave to quell the situation — that’s your first warning,” Campione said, noting the time.

Philadelphia police officers gather near the statue of Christopher Columbus at Marconi Plaza, Monday, June 15, 2020, in the South Philadelphia neighborhood of Philadelphia.

The requests to leave the scene appears at odds with a department-wide mandate issued by Police Commissioner Danielle Outlaw following the arrests of several journalists in the early days of protests. In a policy memo sent out in early June, Outlaw instructed officers to be “as accommodating as possible” with reporters covering the unrest, and to contact supervisors like Campione if they are “uncertain about who is considered to be a member of the press.” Past lawsuits have also established the right of any individual to record police activity, within reason.

Campione’s transfer did not appease Amanda McIllmurry, a political organizer and member of Reclaim Philadelphia who said she was assaulted and pushed around by the crowd at the Columbus statue on Sunday.

“We want to see an investigation and accountability of all police involved at Marconi Plaza,” Macillmurray said. “They consistently ignored, instigated and encouraged violence on peaceful observers.”

McIllmurray, who advocates for the “Defund the Police” movement, said the “police did not keep us safe.” Videos posted online show the crowd pushing a group of about five or six people away from the street. McIllmurray says they were pushed, punched and burned by thrown cigarettes as police looked on and did nothing. One person sprayed the group with mace, she said.

Notably, the recent command changes did not extend to the 26th District, whose commanders drew ire for their alleged kid-glove handling of a crowd who showed up with bats and melee weapons to “protect” the Fishtown precinct earlier this month. Both the Marconi Plaza and the Fishtown incidents ended with reported assaults on bystanders.

In a statement, the city’s Fraternal Order of Police Lodge 5 blasted the leadership change in a statement, accusing Mayor Jim Kenney and Commissioner Outlaw of bowing to “anarchist mobs.”

Di Antonio, of the Broad Street West Civic Association, also said the reassignment was a blunder, describing Campione as a proactive police captain.

“He was the epitome of community-police relations. Any meeting you called, he was always there, he gave us updates on crime stats every month,” Di Antonio said. “I can’t believe it really happened to a person like that.”

Packer Park Civic Association president Barbara Capozzi cast the events in a different light. She said that Campione had fallen victim to instigators she believed were affiliated with “Antifa.” She called the reassignment a form of punishment –– both for the police captain and local residents that rallied around the Columbus statue.

“They send him to a desk job in the farthest post in the Northeast. Really? This guy was out there every day,” she said, of Campione. Speaking about Mayor Jim Kenney, she added, “This is Jimmy punishing our neighborhood.”