Pas Simpson, of Promise Neighborhoods of the Lehigh Valley, a community group, practices social distancing as he delivers food to Lady Espinal in Allentown, Pa., on Friday, May 29, 2020. The Allentown community group's executive director Batts and his colleagues also began buying up all the diapers they could find - 60,000 and counting - and have been going door to door to distribute them to families in need.

Local governments are facing tough choices about what to cut and what to keep.

(Allentown) — Unfilled potholes, uncollected trash, un-mowed grass and, most significantly, fewer police on the street are some of what Allentown says it’s contemplating unless Washington helps it plug a multimillion-dollar budget hole left by the coronavirus pandemic.

Pennsylvania’s third-largest city, with a population of over 120,000, Allentown has largely fended for itself amid sharply falling tax revenue. It’s one of thousands of smaller cities and counties across the U.S. that were cut off from direct aid in the $2 trillion coronavirus relief package passed by Congress in late March. Local officials in those left-out places are now pleading for a massive cash infusion from the federal government to help them stave off financial calamity.

“We represent the average city. If cities like Allentown begin to crumble, that’s how America crumbles,” said City Council member Ce-Ce Gerlach. “So something needs to be done. We need help.”

The federal CARES Act sent $150 billion to states and the nation’s most populous cities and counties to help them pay for expenses related to the virus outbreak. But only 36 cities met the population threshold of 500,000 or more to qualify for the money. With the next round of aid stalled in Congress — and no guarantee of a federal bailout anytime soon — Allentown and other local governments are facing tough choices about what to cut and what to keep. 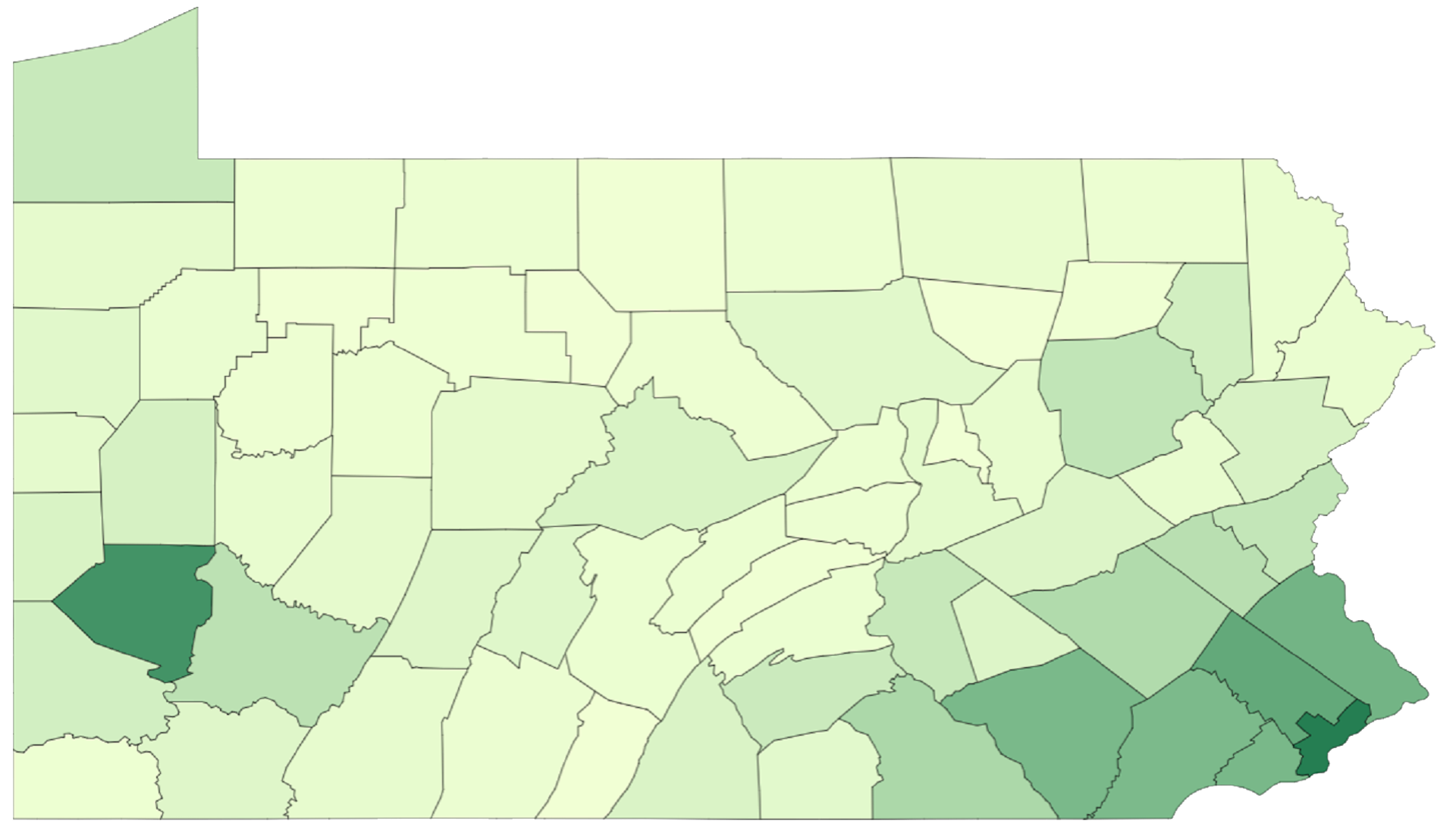 Pa.’s largest counties receive almost twice as much CARES Act funding per resident as the remainder of the state

On the other hand, smaller counties receive more funding per confirmed case

Already, cities are dipping into reserves, canceling road projects, postponing routine maintenance, cutting parks and recreation programs, and furloughing staff. State and local governments have shed more than 1.5 million jobs since the beginning of March, the U.S. Labor Department reported last week. The National League of Cities says municipalities could be looking at $360 billion in red ink through 2022.

“I am hearing from our members all across the country that every day that goes by, the situation is increasingly dire,” said Irma Esparza Diggs, the group’s chief lobbyist.

That’s especially true in Pennsylvania, where cities and towns could see a 40% revenue shortfall — the most of any state, according to a League of Cities analysis.

Allentown predicts a budget deficit of over $10 million, a number officials say could go higher if the economy doesn’t rebound quickly. Like other local governments, Allentown has already been paring back. The city furloughed as many as 87 people out of a work force of 783, and all city department chiefs were ordered to slice another 7% from their budgets, including for police, fire and emergency medical services.

Tax hikes, for now, appear to be off the table. City leaders raised property taxes by 27% two years ago and say residents can’t bear another increase, especially in the middle of a pandemic and historic unemployment.

“It wasn’t fair,” Mayor Ray O’Connell said of the lack of federal support. “The cities are the backbone, the heart of the state and the nation, and to get nothing … we’re scrambling.”

A $3 trillion relief bill passed in May by the U.S. House, where Democrats have the majority, included nearly $1 trillion for state and local governments. It has no chance of passing in the Republican-controlled U.S. Senate, where prospects for future aid to states and cities remain uncertain. 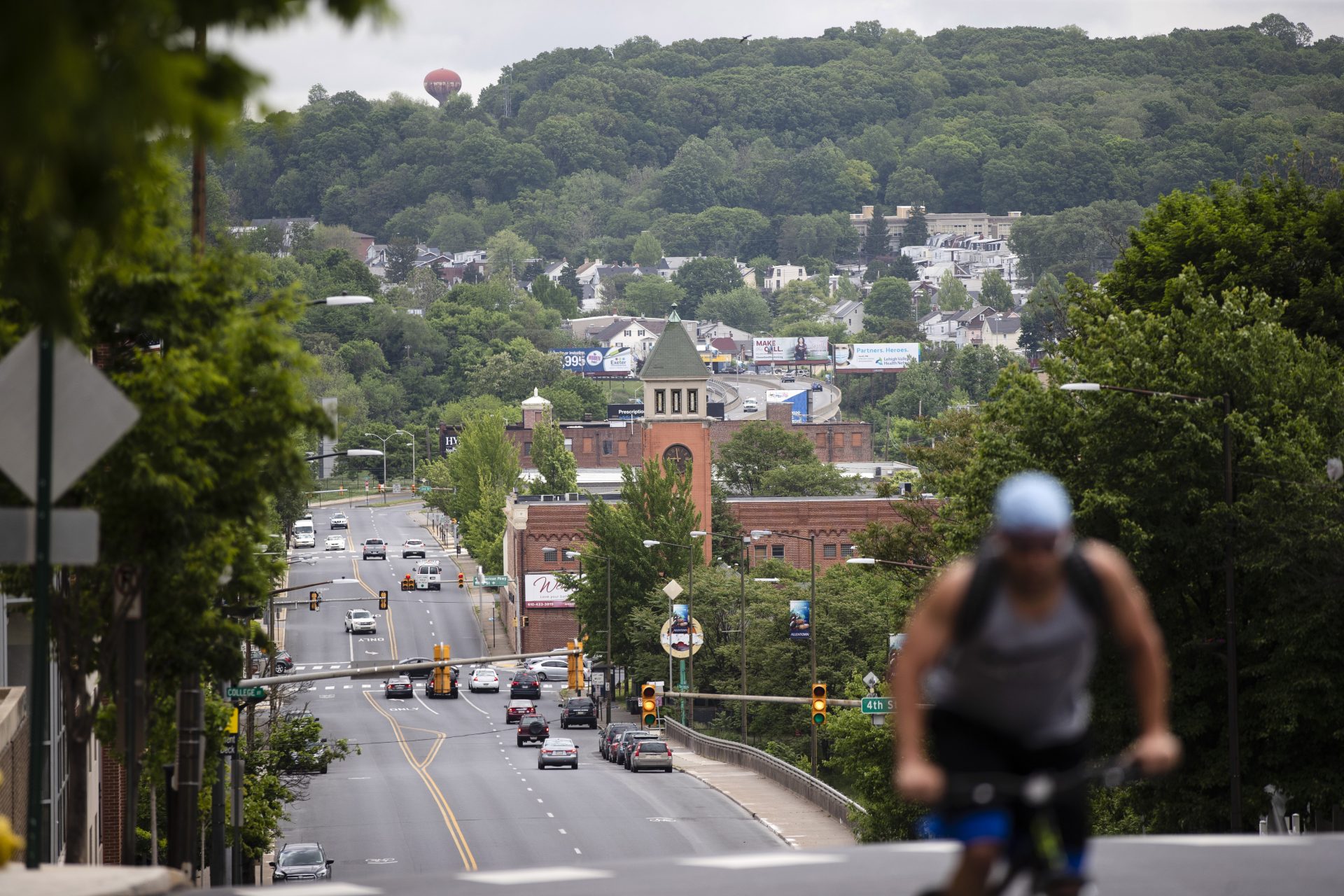 A cyclist pedals up a hill in Allentown, Pa., Friday, May 29, 2020. Allentown predicts a budget deficit of over $10 million, a number officials say could go higher if the economy doesn’t rebound quickly.

Allentown, a former industrial center about an hour north of Philadelphia, had been revitalizing its moribund downtown before the pandemic struck. State tax incentives contributed to development that included a new hockey arena, gleaming office buildings and upscale apartments. Yet Allentown remains a poor city, with over a quarter of its residents living in poverty, more than twice the rate of surrounding Lehigh County and Pennsylvania as a whole.

The pandemic hit the city hard. About 2,300 people in Allentown have tested positive for the virus — an infection rate higher than Philadelphia’s — and 67 have died. The economy has suffered, too, with businesses deemed nonessential forced to close their doors for 2 1/2 months. Allentown’s main street was virtually devoid of pedestrians and auto traffic on a recent Friday afternoon, though some pandemic restrictions have since been lifted and retailers were allowed to reopen last Friday.

“One of the things that’s most disheartening right now is we had a lot of really good momentum going,” said Santo Napoli, owner of assembly88, a men’s clothing store downtown. “You have all this great momentum and then, March, the sky falls with corona.

“This is not a downtown Allentown problem,” Napoli added. “This is a Main Street everywhere problem.”

Other virus impacts have been less visible than an empty downtown, but no less troubling.

The city was forced to cancel a popular summer playground program that many parents lean on while they’re at work. A major homeless shelter lost nearly all its volunteer workforce because of virus restrictions.

At Promise Neighborhoods of the Lehigh Valley, an Allentown community group, executive director Hasshan Batts and his colleagues began buying up all the diapers they could find — 60,000 and counting — and have been going door to door to distribute them to families in need.

“The city’s been limited in the role that they can play, because they didn’t get the support and resources from the federal government,” Batts said. “Our city was set up for failure by the lack of federal support.”

Meanwhile, some of the region’s cultural institutions, shuttered for months and heavily reliant on ticket sales to stay afloat, are at risk of going under, according to the Cultural Coalition of Allentown, an umbrella group.

The Alternative Gallery, a nonprofit arts organization located in an old cigar factory, is holding an online fundraiser “just to keep our doors open through September,” said Brandon Wunder, the founder and gallery director.

He criticized the federal response as inadequate to the task.

The pandemic “got politicized, which never should’ve happened. And because of that, it’s been a battle when we should’ve been working together,” he said.

Some states are sharing the money they received from the earlier congressional relief package with local governments. Pennsylvania plans to distribute $625 million to counties that did not get direct aid from the federal government, including $33 million for Lehigh County, of which Allentown is the seat. A committee will decide how the money will be distributed, but it’s too soon to say whether Allentown will get a cut, or how much. In any case, there will be a lot of competition for the money.

“When everybody holds their hand out, not everybody is going to get the amount of M&Ms they were hoping for,” said Lehigh County Executive Phil Armstrong, the county’s top elected official. “When you look at the needs, it’s probably going to be short.”

Republicans in the U.S. Senate have said they want to see how the money they previously approved is being spent so they can get a better idea of the needs before negotiating another massive aid bill. The Allentown region, for instance, has received nearly $90 million in federal funding for hospitals, public transit, the airport and the Allentown School District.

Republican Sen. Pat Toomey, who helped start an Allentown-area restaurant chain before his 1998 election to Congress, “believes we should take a pause on the massive spending bills and switch gears to helping states safely reopen their economies,” said a statement from his office. “Government spending can never be a substitute for a functioning economy.”

Gerlach, the Allentown City Council member, said it’s already clear to him that the federal government needs to do more.

“We’re on fire right now, literally,” said Gerlach, noting the violence that ravaged other cities following George Floyd’s death in Minnesota. “So the last thing we need is for midsize cities, the majority of the country, to not be able to sustain themselves and provide for the people.”

COVID-19 created a backlog of criminal cases in Philly. New budget cuts could make it hard to dig out of it.