Pa.’s largest counties receive almost twice as much CARES Act funding per resident as the remainder of the state

On the other hand, smaller counties receive more funding per confirmed case 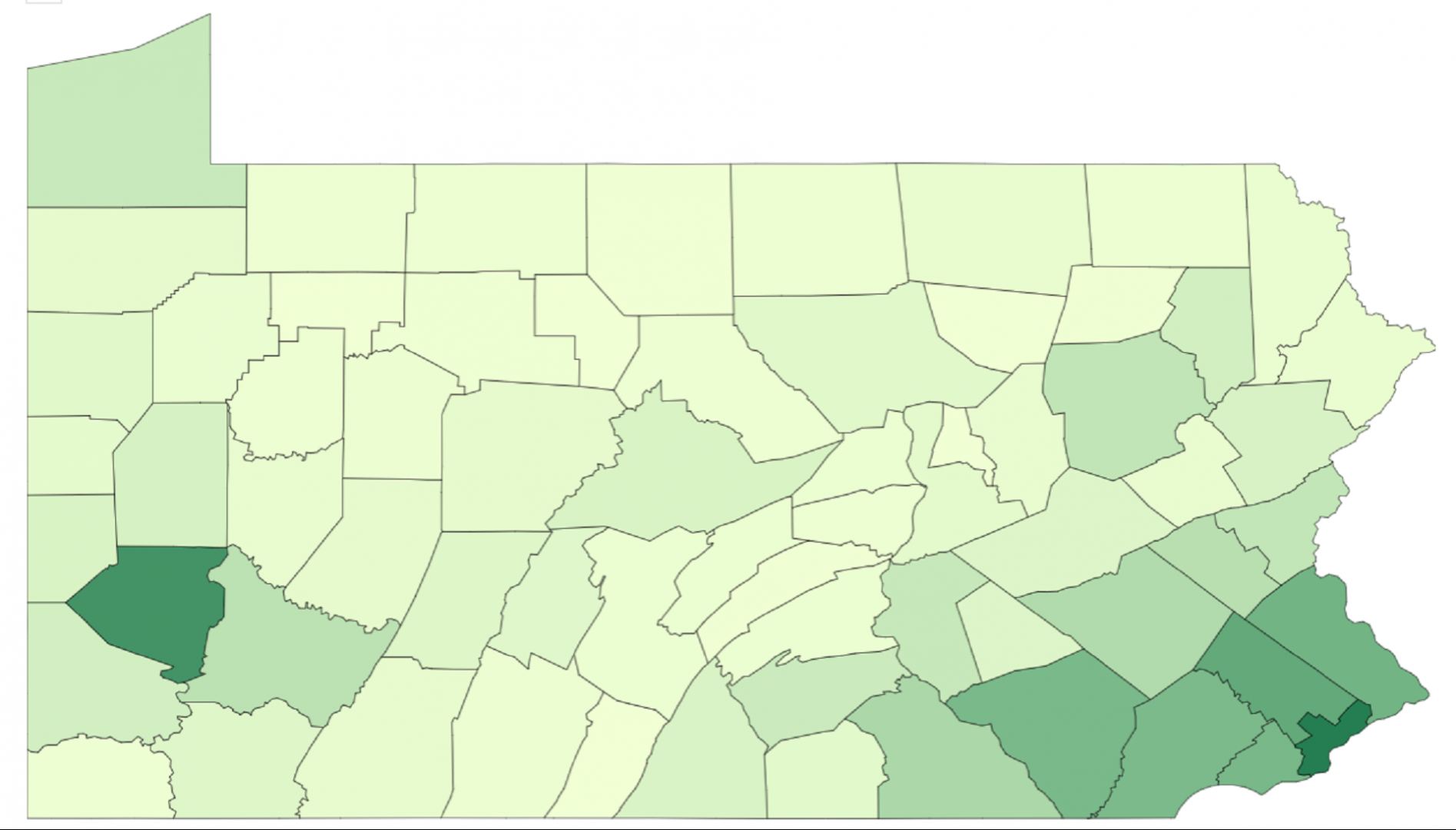 Lancaster and York counties share quite a bit: a river, a congressman, and an historical allusion to the War of the Roses in their names, to name a few.

But one thing that Lancaster and York do not have in common is the amount of federal funding they will receive to fight the coronavirus and offset the pandemic’s impact on their economies.

Lancaster County received a $95 million direct payment from the federal government via the CARES Act. York County, with a population 80 percent the size of Lancaster’s, will receive just over 40 percent of the amount granted to Lancaster — just under $41 million.

Of course, Lancaster and the six other largest counties in Pennsylvania that received larger, direct allocations from the federal government — Philadelphia, Allegheny, Montgomery, Bucks, Delaware, Lancaster, and Chester — are among the hardest hit counties in the state. Those counties received an average of $21,771 per positive coronavirus test, while the smaller counties have received an average of $22,059, a PA Post analysis found. According to an Associated Press analysis, statewide, Pennsylvania received among the lowest allocations per positive test in the country.

This analysis is based on final allotment figures provided to PA Post by a Pennsylvania House Appropriations Committee staffer as well as data from the U.S. Department of the Treasury. A spokesperson for Gov. Tom Wolf said that guidelines for disbursing the money are not yet available, and she did not address whether the governor planned to follow through on a threat he made May 11 to withhold money from counties that reopened ahead of the governor’s timetable.

The federal money can be used only for “necessary expenditures incurred due to the public health emergency,” guidance from the U.S. Department of the Treasury says. So while that includes funding the direct public health response to quell existing outbreaks, counties also plan to use the money to protect their entire populations from a potential second wave and to help businesses affected by the statewide shutdown.

For example, Lancaster has already approved a plan to procure personal protective equipment to distribute to businesses, launch a grant program for small businesses, and contract with the local hospital system to start a contact tracing program. York, however, has not received its allocation, and, when it does, will have significantly less money per resident to achieve similar goals. Counties will have to apply to receive their prescribed allocations from the state’s Department of Community and Economic Development, department spokesperson Casey Smith said, and adhere to guidelines on how to use the money. Those guidelines were released on June 11, and applications from counties are due by June 16.

“I would be remiss if I didn’t say that we were disappointed that we didn’t get any funding directly from the federal government,” said York County President Commissioner Julie Wheeler, a Republican. “I look at our sister county, Lancaster, and I’m certainly happy for them … [but] given that we are not that much smaller than them, I would assert that, much like many other counties in the Commonwealth, we’re all working very hard and very diligently to mitigate COVID-19.”

She said that she does not expect York to receive the money until July. The county is still working to determine how best to spend it, but she highlighted support for small businesses as a chief priority.

York does have fewer cases than Lancaster and is, on a per case basis, receiving more money than Lancaster. Wheeler did not dismiss the idea that the prevalence of COVID-19 in a county should bear on the funding it receives, but, she said, it is a tough pill to swallow to see Lancaster get so much more money than York.

“Every county in Pennsylvania has been impacted by this pandemic,” she said.

The disparity arose because the federal law contained a quirk in how it allocated money to state and local governments: While the total pot was divided for even distribution to the states based on population, only those local governments with populations exceeding 500,000 received money directly from the feds. The rest went to the states to do with as they pleased. In Pennsylvania, the first seven counties got the direct payments back in April. Officials in the other 60 were left to wait.

Pennsylvania ultimately decided to send $625 million of its nearly $4 billion to the remaining  counties. Other funds were set aside for nursing homes, hospitals, and loans to businesses. But the result is that the smaller counties, where 54 percent of the state’s population lives, received only 52 cents on the dollar per resident in comparison to the larger counties. Still, that is more than the state was required to distribute; the federal law did not require states to pass any of the money they received to local governments, and, considering the money in proportion to the number of confirmed cases, the distribution appears more equitable.

“We were relying on the good will of the state to help out those other 60 counties,” said Lisa Schaefer, president of the County Commissioners Association of Pennsylvania. “The way it was set up didn’t really give us a good place to start from. We work with what we have. We’re certainly grateful that we were able to secure funding for our other counties. It was never a guarantee to start with.”

Had the state awarded money to smaller counties at the same rate that money was awarded to larger counties, it would have cost $1.2 billion, leaving the state with $2.7 billion rather than the $3.3 billion it had to allocate elsewhere. When the legislature passed Senate Bill 1108 at the end of May, it retained $1.3 billion in reserve. Some of that money could still go to local governments, though lawmakers also hope that the federal government will allow some of that money to replenish the state treasury, which has been depleted due to tax revenue falling off a cliff. That may mean that the best hope for local governments is more federal money.

“There is still a need for direct funding to our local governments to help them deal with the onset of those [COVID-19] expenses,” said Schaefer. She said there seems to be a greater prospect of new funding coming from the federal government, so that is where her organization is focusing its efforts.

Allocating more money to states and local governments has become something of a political football in Washington, as some Republicans dubbed such efforts “blue state bailouts” while others, such as Sen. Mitt Romney (R-UT), argued that “blue states aren’t the only ones who are screwed” without a federal cash infusion. Senate Majority Leader Mitch McConnell (R-KY) suggested that states and local governments ought to consider declaring bankruptcy if they are out of money.

An additional trillion dollars for state and local governments was part of a stimulus package  passed by House Democrats in May, but the path forward remains uncertain as the Senate has not shown interest in taking up the legislation.

A spokesperson for the congressman who represents both Lancaster and York counties, Rep. Lloyd Smucker (R), said in an email that Smucker thinks counties like York should have been able to access “their fair share of federal funding.” But he does not believe it is time for the federal government to allocate more money to states and local governments.

Wheeler said this round of funding would have been better directed if it used “a formulation and calculation that would have been used so that all 67 counties could have got direct money, a formula that allocated it in a fair and consistent manner across the 67 counties versus just using population as the only indicator.”

As for whether local governments are going to need more financial support from the government, Wheeler said it remains to be seen based on the needs of municipalities.

“We really don’t have a line of sight yet, at the municipal level,” she said. “We will need to work collaboratively … to identify their specific financial needs.

This story was updated on Wed., June 10 with information from a DCED spokesperson and on Thurs. June 11 with the DCED guidelines.