Protesters rally as Philadelphia Police officers and Pennsylvania National Guard soldiers look on, Monday, June 1, 2020, in Philadelphia, over the death of George Floyd, a black man who was in police custody in Minneapolis. Floyd died after being restrained by Minneapolis police officers on May 25. (AP Photo/Matt Slocum) 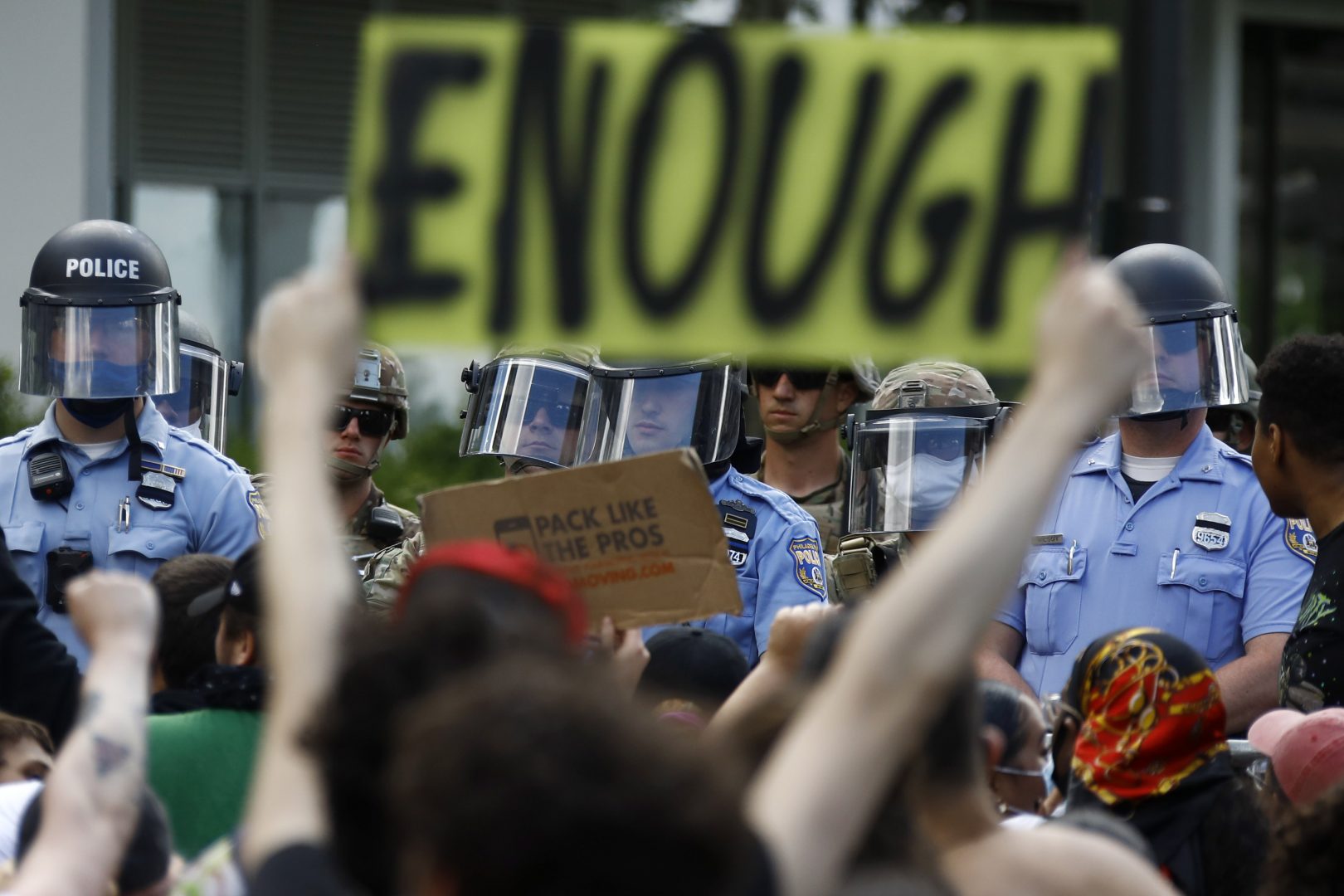 Protesters rally as Philadelphia Police officers and Pennsylvania National Guard soldiers look on, Monday, June 1, 2020, in Philadelphia, over the death of George Floyd, a black man who was in police custody in Minneapolis. Floyd died after being restrained by Minneapolis police officers on May 25. (AP Photo/Matt Slocum)

PHILADELPHIA — A Philadelphia police officer surrendered Monday to face aggravated assault and other charges stemming from video that shows him striking a student protester in the head with a metal baton.
Police Staff Inspector Joseph Bologna has been suspended for 30 days with the intent to dismiss him from the department.
Bologna’s attorney said the officer’s actions were justified because the protests over the death of George Floyd had turned violent, and he has drawn the support of many of his colleagues.
Bologna, who is also charged with reckless endangerment and possession of an instrument of crime, was applauded by scores of supporters including officers in and out of uniform who had gathered outside a police union lodge in a show of support.
Video circulating widely on Twitter shows Bologna, during a June 1 protest, hitting a 21-year-old Temple University student in the head and neck area with a baton, the student being knocked to the ground, and another officer putting a knee on him to keep him down.
Police Commissioner Danielle Outlaw said Friday that the officer had been taken off street duty pending an internal investigation. Hours later, District Attorney Larry Krasner announced that his office would be charging Bologna with a crime.
FOP Lodge 5 President John McNesby called the charges “baseless” and said the union looks forward to the day “that Bologna is exonerated and cleared for duty.”
Over the weekend, other officers organized efforts to help cover Bologna’s legal defense, including a GoFundMe page that had collected more than $22,000 as of Monday morning, The Philadelphia Inquirer reported. The police union also announced on Twitter that it would sell T-shirts saying “Bologna Strong.”
Bologna’s attorney, Fortunato Perri Jr., said the officer’s actions during the protest were justified.
“Last week he worked several consecutive 15-hour shifts to protect the peaceful protesters, residents and business owners from those who used the protests to engage in arson, looting, theft and mayhem,” Perri wrote in an emailed statement. “In the midst of this deadly pandemic, Inspector Bologna and his fellow officers were spit on, sprayed with urine and other chemicals as well as verbally and physically assaulted. His use of force to apprehend an individual, who was trying to thwart a lawful arrest during a melee, was lawful and justified.”
The attorney representing the engineering student, who according to the district attorney’s office needed about 10 staples and 10 stitches, declined to comment on the charges or arrest.
Lawyers, activist groups and others have strongly criticized multiple instances of police use of force during the protests, many recorded by reporters or posted on social media. A confrontation June 1 involving officers firing tear gas and rubber bullets at protesters who had gotten on to Interstate 676 and were trying to retreat up a steep embankment drew national attention.
On the other side of the commonwealth, meanwhile, prosecutors in Allegheny County said they were dropping charges in more than three dozen cases from recent protests in Pittsburgh stemming from the death of George Floyd in Minnesota.
A spokesman for the office said the mayor had directed city police to file charges against several dozen people “who allegedly chose to engage in civil unrest,” but “notwithstanding the impact that the recent marches have had on our citizens and businesses, we do not have the evidence in these cases to suitably conduct a preliminary hearing.”
Accordingly, District Attorney Stephen Zappala had directed that charges be withdrawn in the 39 cases “until the public safety director provides evidence that is both relevant and substantial,” the spokesman said.
Messages seeking comment were left for representatives of the public safety department and Mayor Bill Peduto.
Floyd, who was black, died May 25 after a white Minneapolis police officer pressed a knee into Floyd’s neck even as he pleaded for air and stopped moving.