With victories in 7 states, including Pennsylvania, Joe Biden closes in on the Democratic nomination

Voters across America were forced to navigate curfews, health concerns and National Guard troops — waiting in line hours after polls closed in some cases.

(Washington) — Joe Biden is on the cusp of formally securing the Democratic presidential nomination after winning hundreds more delegates in primary contests Tuesday that tested the nation’s ability to run elections while balancing a pandemic and sweeping social unrest.

Biden could lock down the nomination within the next week as West Virginia and Georgia hold primaries.

On Tuesday, voters across America were forced to navigate curfews, health concerns and National Guard troops — waiting in line hours after polls closed in some cases — after election officials dramatically reduced the number of in-person voting sites to minimize the spread of the coronavirus outbreak.

Biden and President Donald Trump easily swept their respective primary contests that ranged from Maryland to Montana and featured the night’s biggest prize: Pennsylvania. The two men are certain to face each other on the presidential ballot in November, yet party rules require them first to accumulate a majority of delegates in the monthslong state-by-state primary season. 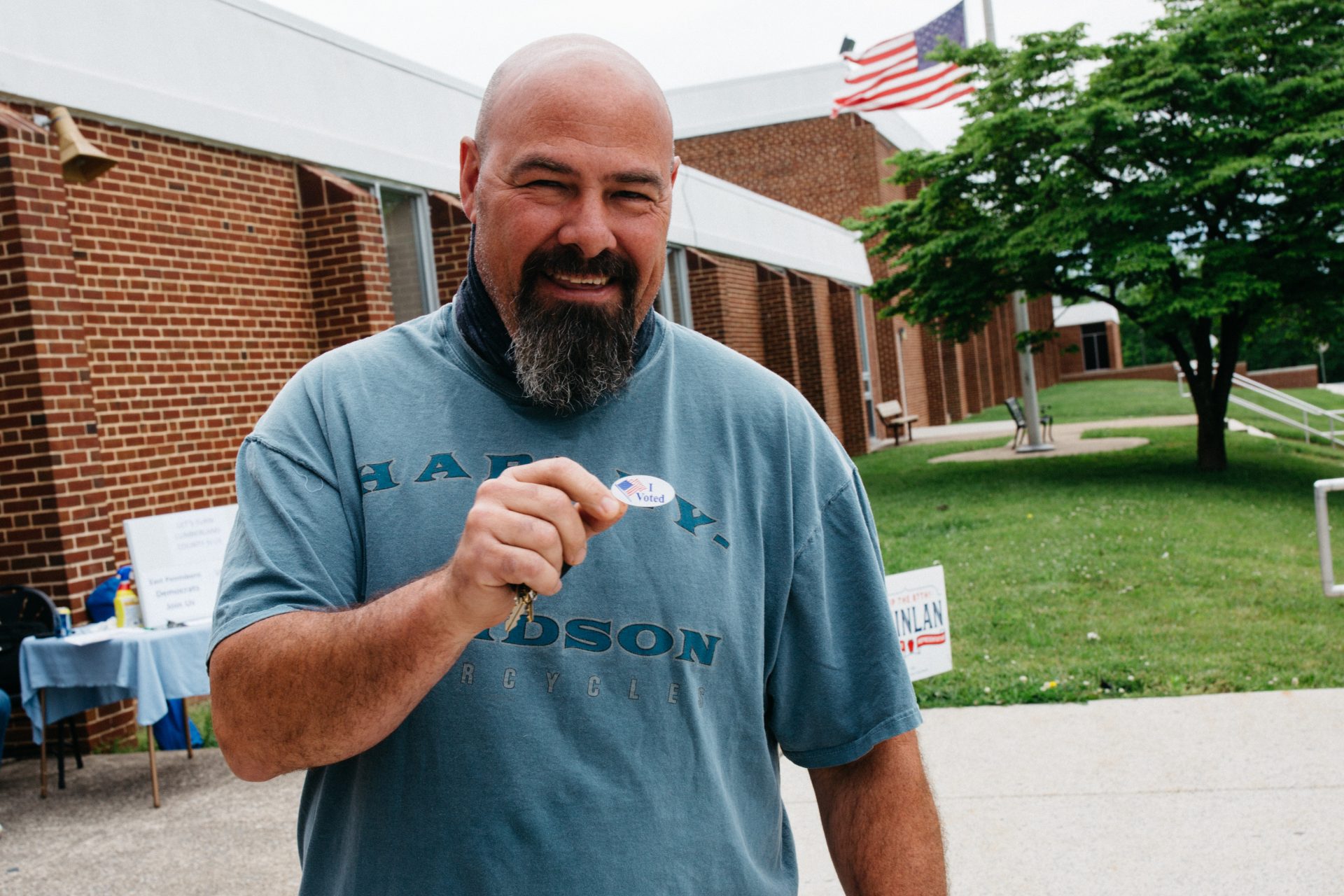 A voter shows off his “I voted” sticker outside of East Pennsboro Middle School, where East Pennsboro 1, 3, 8, 9 polling places were all combined, on June 2, 2020.

Pennsylvania, which offered Tuesday’s largest trove of delegates, also represented a significant test case for Republicans and Democrats working to strengthen their operations in a premier general election battleground.

Voters were forced to brave long lines in “militarized zones” because officials consolidated the vast majority of polling places in Philadelphia to minimize health risks, according to Erin Kramer, executive director of One Pennsylvania. She noted that some polling places in African American communities are in police stations.

“Having to stand in line while police officers are entering and exiting the building on police business is not exactly how people want to spend their election day,” Kramer said.

Biden was in Philadelphia earlier Tuesday to deliver remarks about the civil unrest that has erupted across the nation after the police killing of George Floyd. He didn’t talk about the primary, instead focusing his attention on Trump, whom Biden blasted as “more interested in power than in principle.”

Vermont Sen. Bernie Sanders is not actively campaigning for the Democratic presidential nomination, having suspended his operation and endorsed Biden, but his name appeared on the ballots. On the eve of Tuesday’s primaries, senior adviser Jeff Weaver encouraged progressives to vote for Sanders anyway to help maximize his influence in the direction of the Democratic Party.

The comments served as a reminder that Biden may have no legitimate Democratic rivals remaining, but he must still win over skeptical activists from his party’s far-left flank, who worry he’s too close to the political establishment. 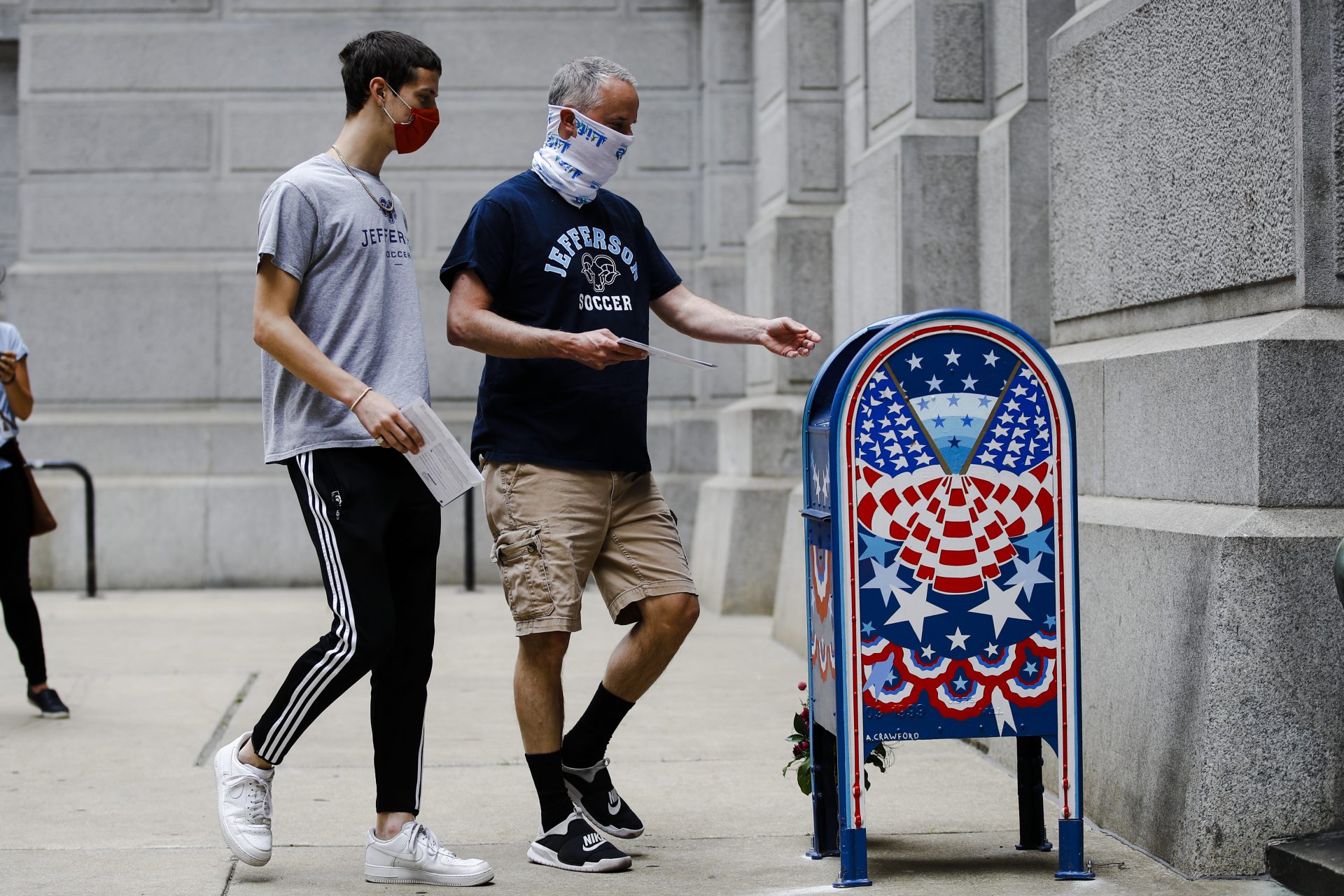 Party unity was an afterthought this week, however, as more immediate health and safety concerns dominated the national conversation. The coronavirus death toll has surged past 100,000 nationwide, and thousands of new cases are reported each day.

At the same time, several major cities, particularly Washington, D.C., and Philadelphia among those voting Tuesday, struggled to contain protests and related looting that led to thousands of arrests.

Some voters said Trump’s increasingly tough tone toward protesters inspired them to participate in the democratic process. Nicholas Autiello, who works in finance in Rhode Island, said he was disturbed by police driving back peaceful demonstrators near the White House on Monday.

“Last night, we have a president who is acting like a dictator,” Autiello said. “So being able to come out here this morning and fill in a circle next to a name for someone who I know will restore honor and decency to the presidency was so important.”

Political groups have had to adjust as some states move to a system that relies largely on voting by mail. They include Montana, where all 56 counties decided to vote entirely by mail, despite Trump’s repeated warning against it. Voting rights watchdogs in multiple states on Tuesday expressed concerns about access to mail ballots, confusion about deadlines and a shortage of poll workers that led to long lines.

“We are in unique times, and voting is a unique challenge for people,” said Josh Schwerin, chief strategist for the pro-Democrat super PAC Priorities USA. He said that his organization and others would be watching closely on Tuesday “to see how well it works, where issues are and where obstacles have been put in place.”

In Iowa, Republican Rep. Steve King, known nationally for controversial remarks, lost his bid to be nominated for a 10th term to state Sen. Randy Feenstra. House Republicans stripped King of his committee assignments in 2019 after comments that seemed to defend white nationalism, providing fuel for Feenstra’s argument that King was no longer an effective representative for the 4th District.

In a New Mexico race for an open House seat, ex-CIA operative Valerie Plame lost the Democratic primary to attorney Teresa Leger Fernandez, a professional advocate for Native American communities and voting rights issues. A first-time candidate for public office, Plame harnessed her fame as the operative whose secret identity was exposed shorty after her diplomat husband disputed U.S. intelligence used to justify the 2003 Iraq invasion.